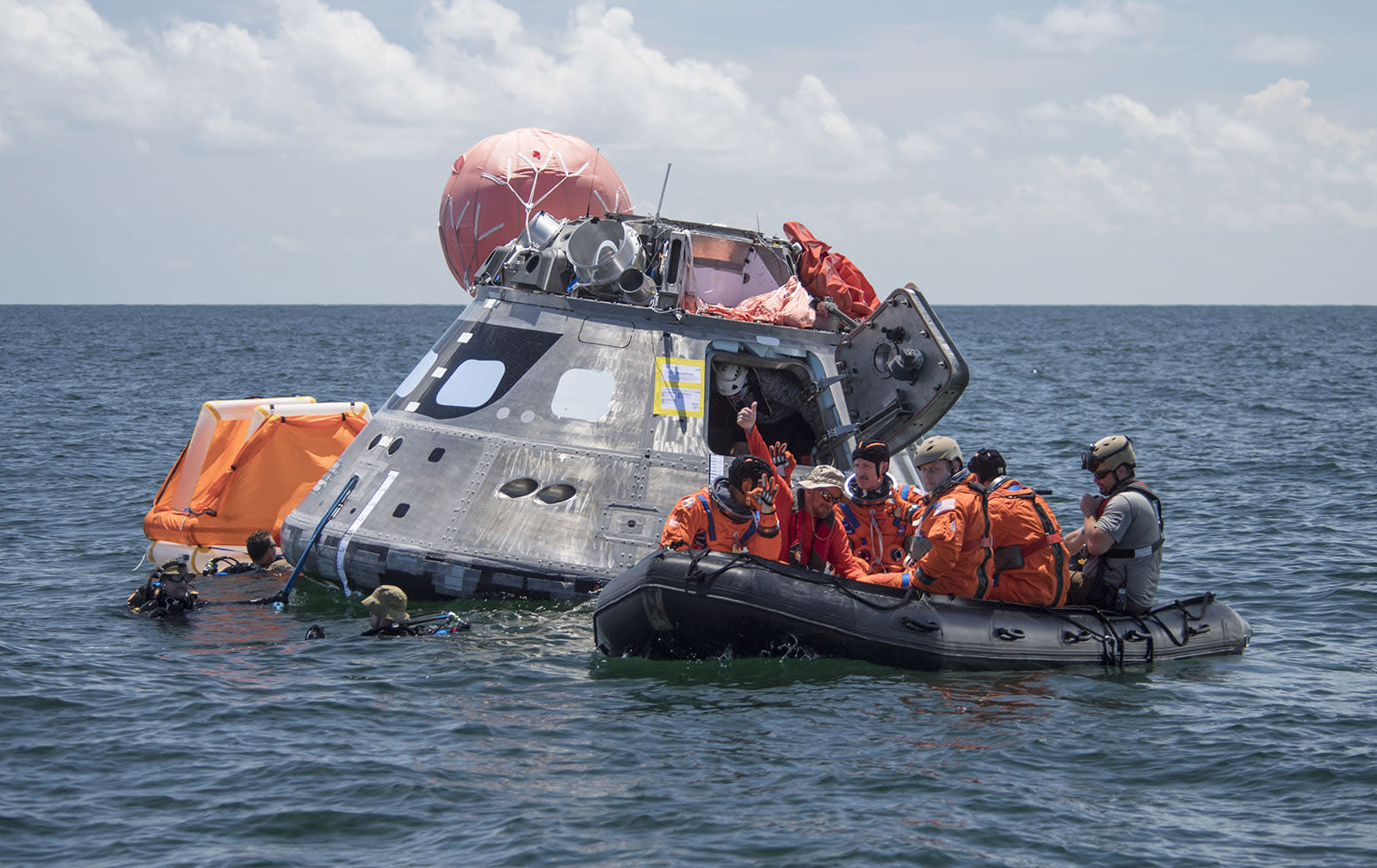 As Project Mercury astronaut Gus Grissom learned, NASA spaceflights are not over after splashdown. During his 1961 mission, he barely escaped when the hatch blew too soon and took the "Liberty Bell" capsule to the bottom of the sea. Ever since, NASA has taken splashdown exit procedures very seriously, and it's no exception for the manned Orion capsule that's intended to go to Mars on the tip of the massive Space Launch System (SLS) rocket.

NASA's Orion team, the Ground Systems Development and Operations group, and the US Coast Guard, Navy and Air Force recently ran Orion crew egress testing on the waters off of Galveston, Texas. The aim was to get the astronauts out of the capsule and into a raft in under three minutes without assistance from recovery personnel. The ocean tests follow extensive recovery procedures practiced in the 6.2 million gallon Neutral Buoyancy Lab at NASA's Johnson Space Center in Houston.

With the tremendous speeds required to power it to Mars, Orion will be subject to more stresses than any capsule before. For instance, NASA flew Orion on top of a Delta IV Heavy rocket in late 2014, where it went beyond the Van Allen belt to an orbit of 3,600 miles. While the heat shields stood up during the test mission, the agency had to redesign them for the greater SLS speeds during the return trip from Mars.

NASA and its partners are working on multiple ways to get astronauts out of Orion. Normally, crews would be on the scene within minutes to assist. However, if the capsule goes off course and rescue crews can't get there quickly, or the weather is rougher than expected and water starts to seep in, astronauts must be able to get out and into a life raft on their own. The capsule is equipped with emergency supplies like water, tools, and signaling mirrors, and can sustain a crew for up to 24 hours.

The Orion capsule is destined for big things -- as part of the SLS, it will hopefully one day take astronauts to Mars. It's built with all new technology, including "advances in propulsion, communications, life support, structural design, navigation and power," NASA says. It also comes with its own crew and service modules, a spacecraft adapter and launch abort system that can save crew in the event of an accident.

In this article: Crew, gear, NASA, Orion, OrionSpacecraft, space, Splashdown, TheBigPicture, thenewbigpicture
All products recommended by Engadget are selected by our editorial team, independent of our parent company. Some of our stories include affiliate links. If you buy something through one of these links, we may earn an affiliate commission.