Webster's dictionary may define "modular" as "constructed with standardized units," but in tech, that buzzword has a slightly different meaning. A modular device usually has swappable components that bring additional functionality. But Tag Heuer is going with the original definition of the word for its latest high-end Android Wear smartwatch. The Connected Modular 45 is the follow-up to the company's surprisingly successful debut smartwatch that came out last year. The company's sophomore offering is a highly customizable device that lets you swap out the "smart" module for a mechanical timepiece, turning it into just another analog luxury watch with a multi-thousand-dollar price tag. You can change other components of the watch, too. Starting at $1,600, the Tag Heuer Connected Modular 45 is a refinement of the original and, like its predecessor, will appeal to only very select group of people.

Tag's play on modularity focuses more on the watch's form than its functions. When you go to the company's website to buy the Modular 45, you can use the "Watch Selector" tool to pick your preferred module, strap and lugs. That's similar to what Motorola did with the Moto 360, except Motorola didn't offer options for the lugs.

But Tag doesn't let you go completely crazy with customization. I tried picking a gold module, black ceramic strap and gold lugs, but couldn't. Only certain straps and lugs can be paired with a gold module, and not all the lugs are available by the time you've selected the watch face and band. 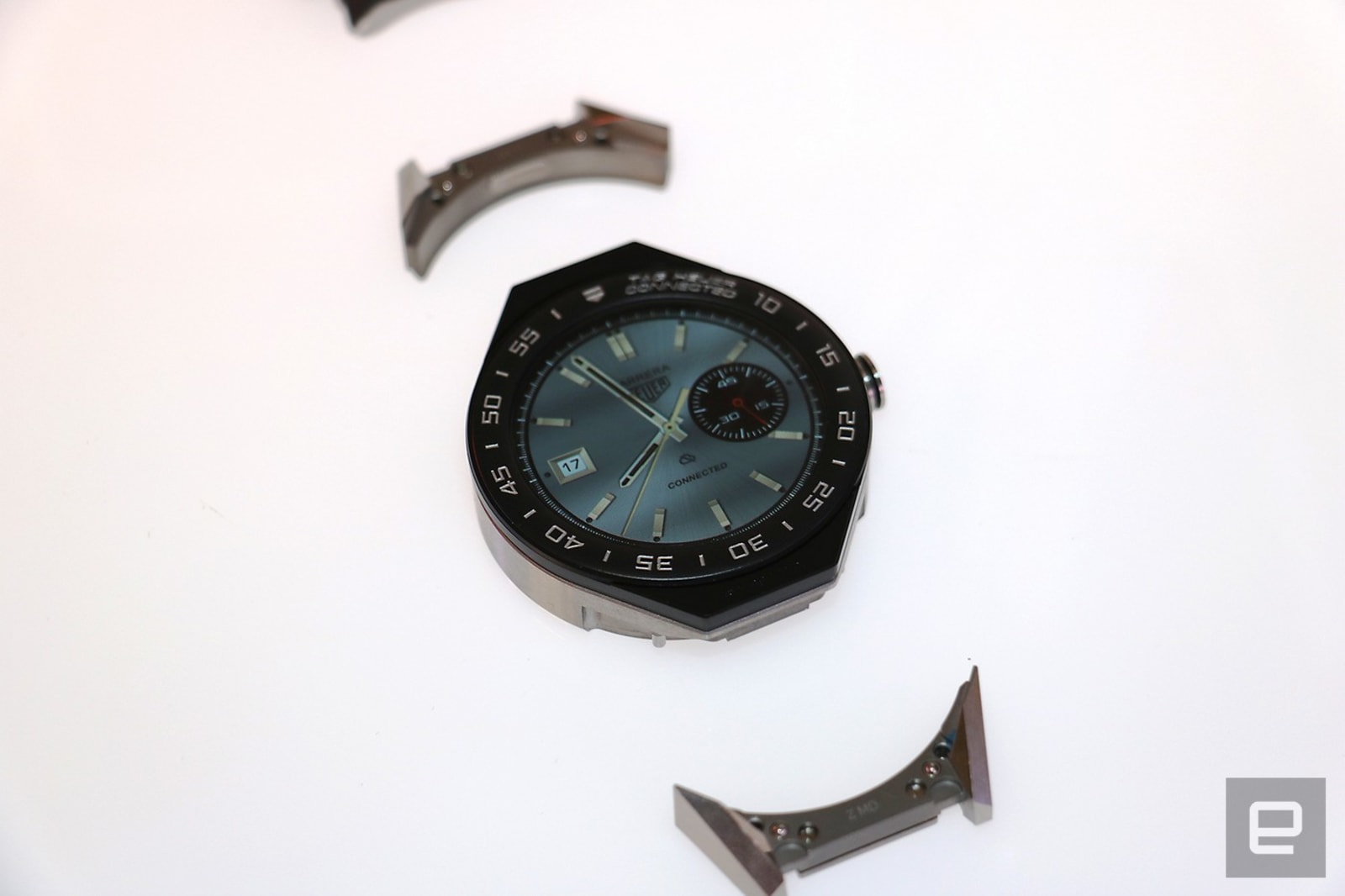 To get really specific about the combination of parts you want, you'll have to go to a brick-and-mortar retailer, because Tag Heuer offers only 56 predefined models online. That's frustrating: I don't want to have to get out of my apartment and find a retailer nearby just so I can get the exact look I want. (Where am I? In the 1990s?!) Someone who already wants to drop thousands of dollars for a fully customized Tag, however, may be determined enough to do so.

Even after you buy the watch, you can change the way it looks. The lugs, strap and module are designed to be easily swappable, although putting the watch back together is not as simple as taking it apart. For instance, the band slips out smoothly when you pull it toward you after pushing down the catch on the watch's underside. Putting it back, though, requires a bit of finesse, as you have to align the parts very carefully -- an awkward maneuver indeed.

In fact, Tag Heuer seems aware of the difficulty involved, and a spokesperson made sure to get me on the phone to walk me through the process. Removing the lug is slightly more complicated: You have to squeeze both ends and then jiggle the attachment to free it from the strap. 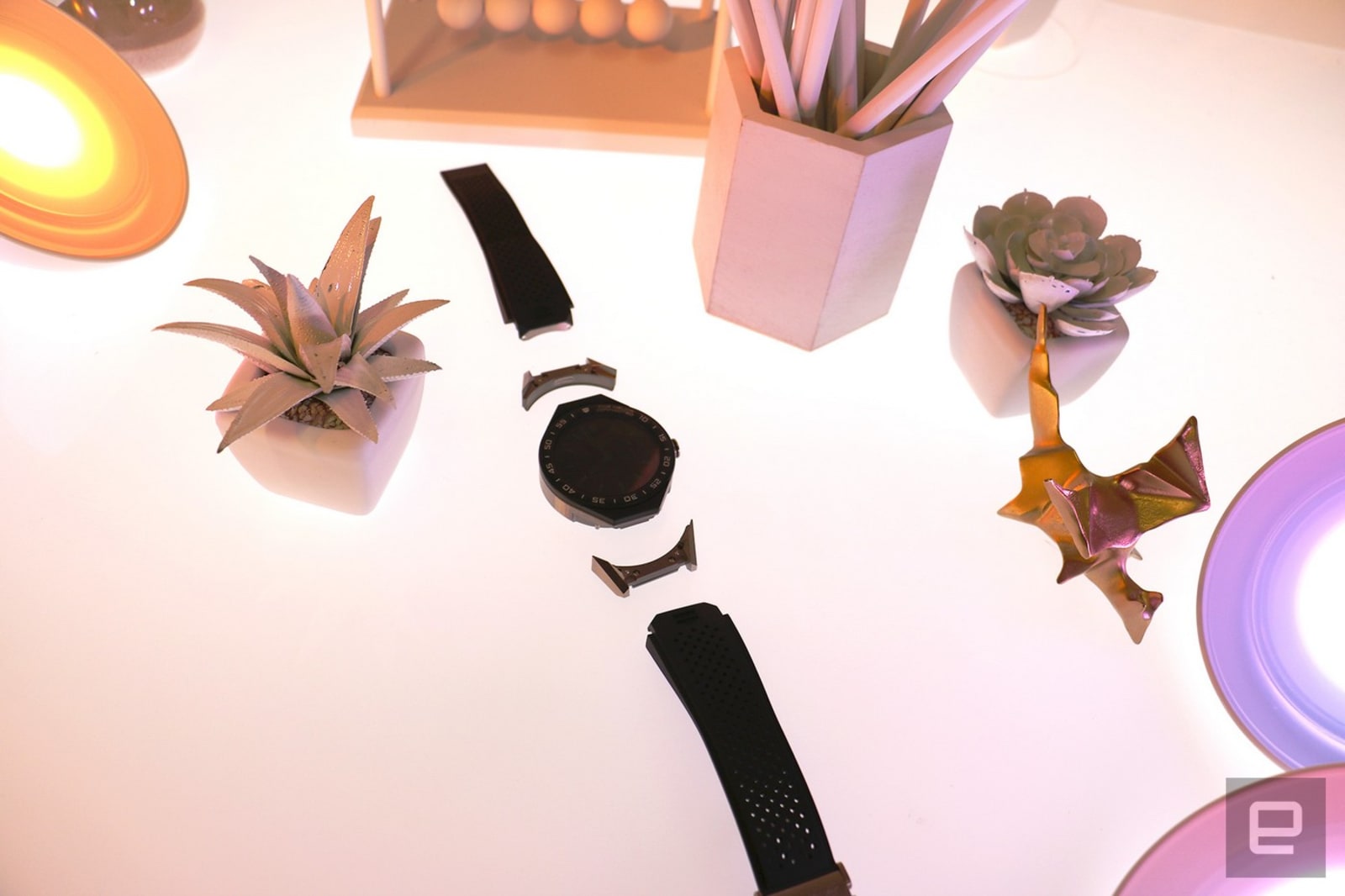 Not only is it nonintuitive to exchange the parts, it's expensive. The straps range from $115 for a vulcanized-rubber option to $945 for a ceramic version. The lugs cost between $850 for basic titanium and $2,700 for a diamond-studded set. A mechanical module that lets you turn the Modular 45 into a regular analog watch sells for a whopping $1,650.

Not all the components are meant to be user-replaceable, either. Changing the clasp, for instance, requires a visit to a physical store. But what Tag offers is novel for a luxury watch and may appeal to a sizable fanbase that's unlikely to balk at the high prices.

In addition to customizing the watch's hardware, you can personalize the device's face via the onboard Tag Heuer Studio app. This lets you pick the number of hands and dials, as well as the style and color of the accents and background. The designs you can come up with here are sophisticated and generally appealing, and pair well with the watch's aesthetic. 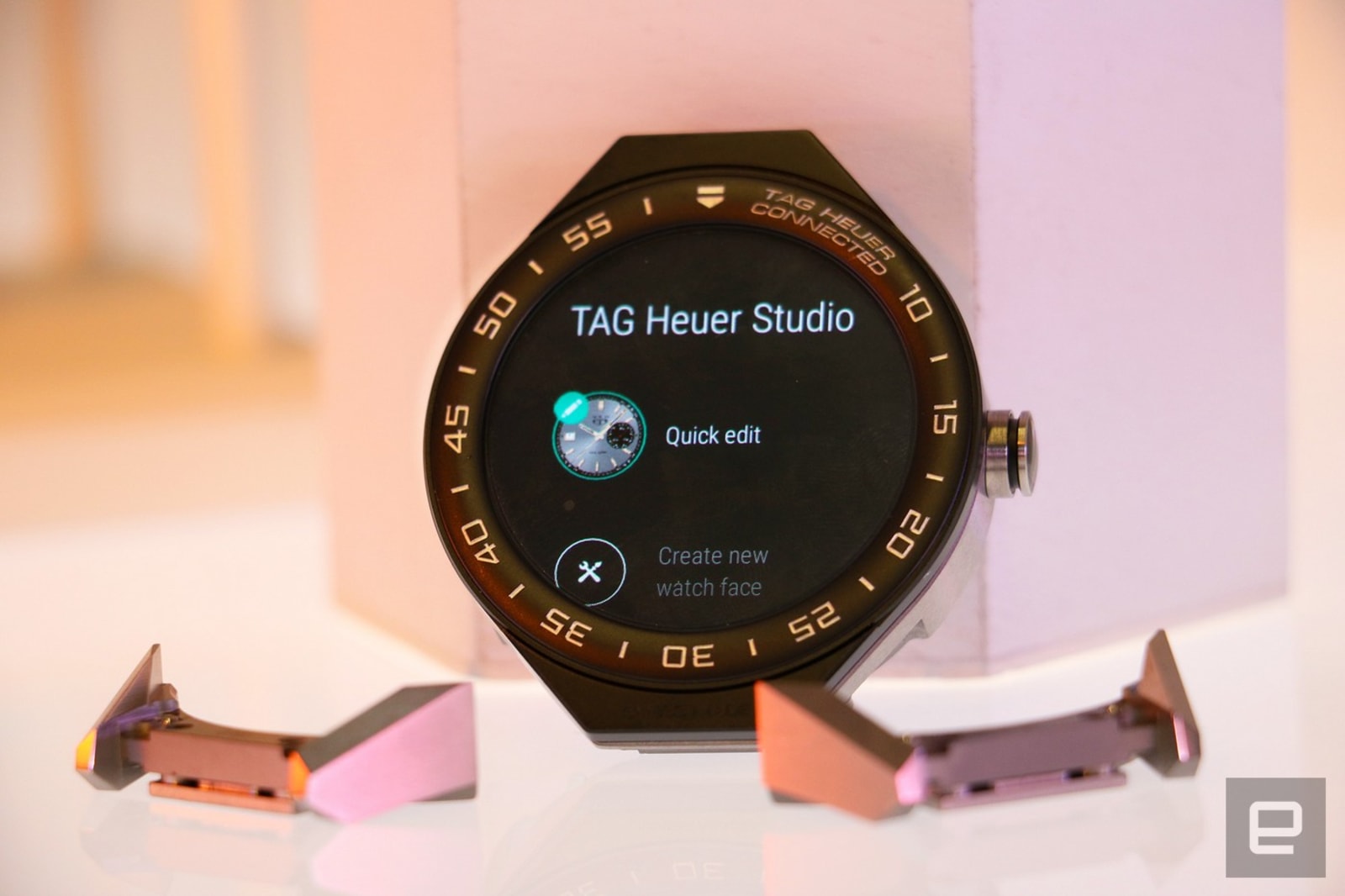 Like the original Tag Heuer Connected, the Modular 45 is a chunky but well-built device. On my relatively slender wrist, the watch is a massive monstrosity, but on the wrists of some of my male colleagues, it's a more reasonable size. It's tempting to blame the Tag's heft on the sensors it houses, including GPS, NFC and Bluetooth sensors. But the Modular 45 doesn't even have a heart-rate monitor, so its size (and price) are less excusable.

Plus, there are similarly designed Android Wear watches with all those components that are smaller and more comfortable. The vulcanized-rubber strap on my review unit is stiff and far less comfortable than the band on the Huawei Watch 2, for example.

I do appreciate the Modular 45's bezel, which is carved with markings to denote the time, as well as the Tag Heuer logo etched into the button on its right side. Unfortunately, this isn't a dial like on the LG Watch Sport or Style, which you can twist to scroll through menus and lists. On the Tag Heuer, you can only press the knob to go home or long-press for Google Assistant. 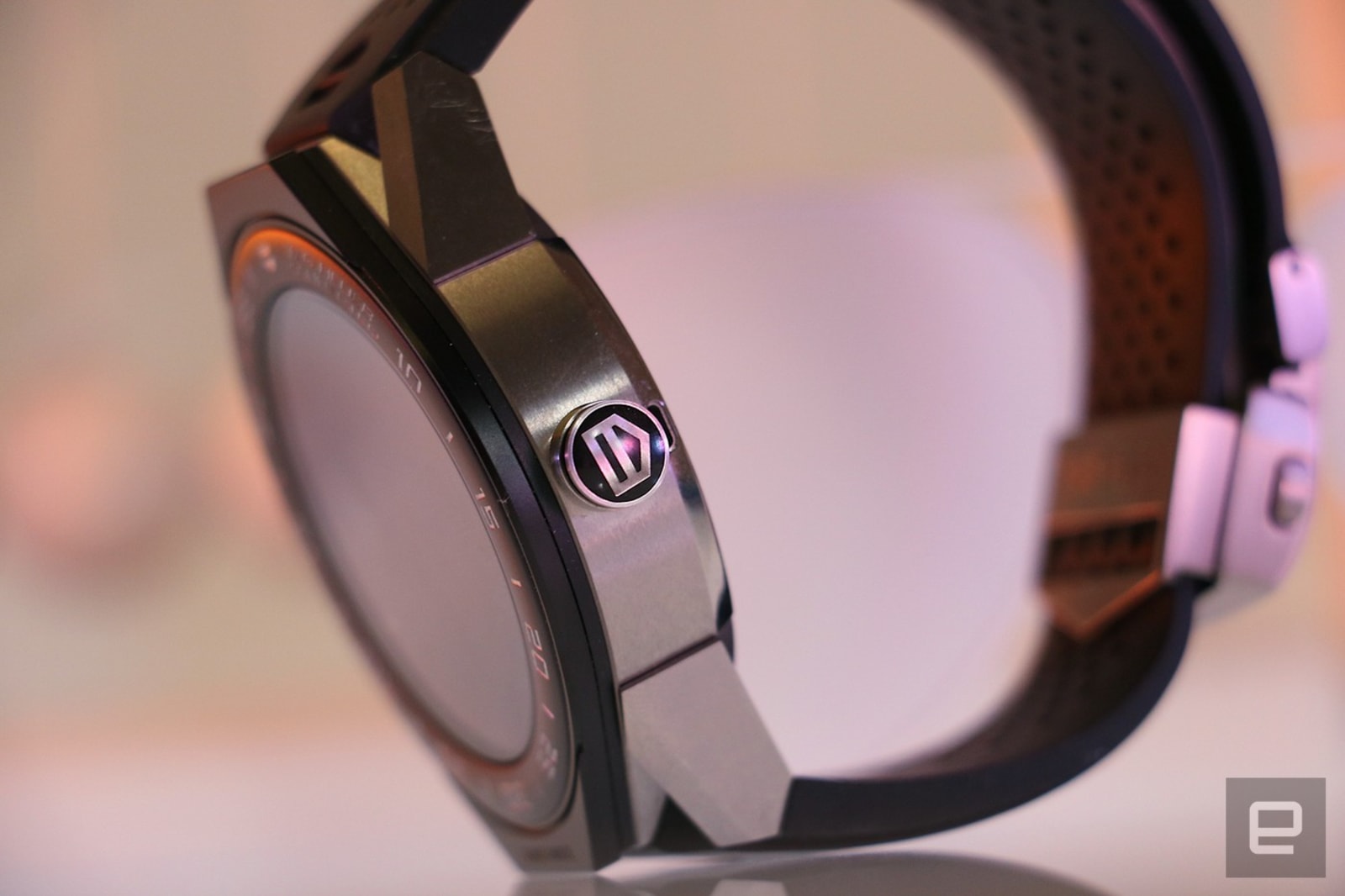 Like other Android Wear 2.0 watches I've tested, the Modular 45 barely gets through a full day before running out of juice. On a slow day with very little interaction, however, I was impressed to find the watch made it through almost a day and a half. During my testing, I found the Intel-powered Modular 45 mostly responsive, although it encountered lag more frequently than the LG Watch Style, which uses a Qualcomm Snapdragon 2100 CPU.

Really, the rest of the Modular 45's functions are basically the same as any other Android Wear 2.0 watch. The primary software differences are the watch-face designer I mentioned earlier, and a Tag Heuer Connected app that offers some customized content from the company's partners. The Modular 45 also has a water-resistance rating of 5 ATM, meaning it can withstand submersion in up to 50 meters or 165 feet. That's a deeper range than most existing options are capable of. 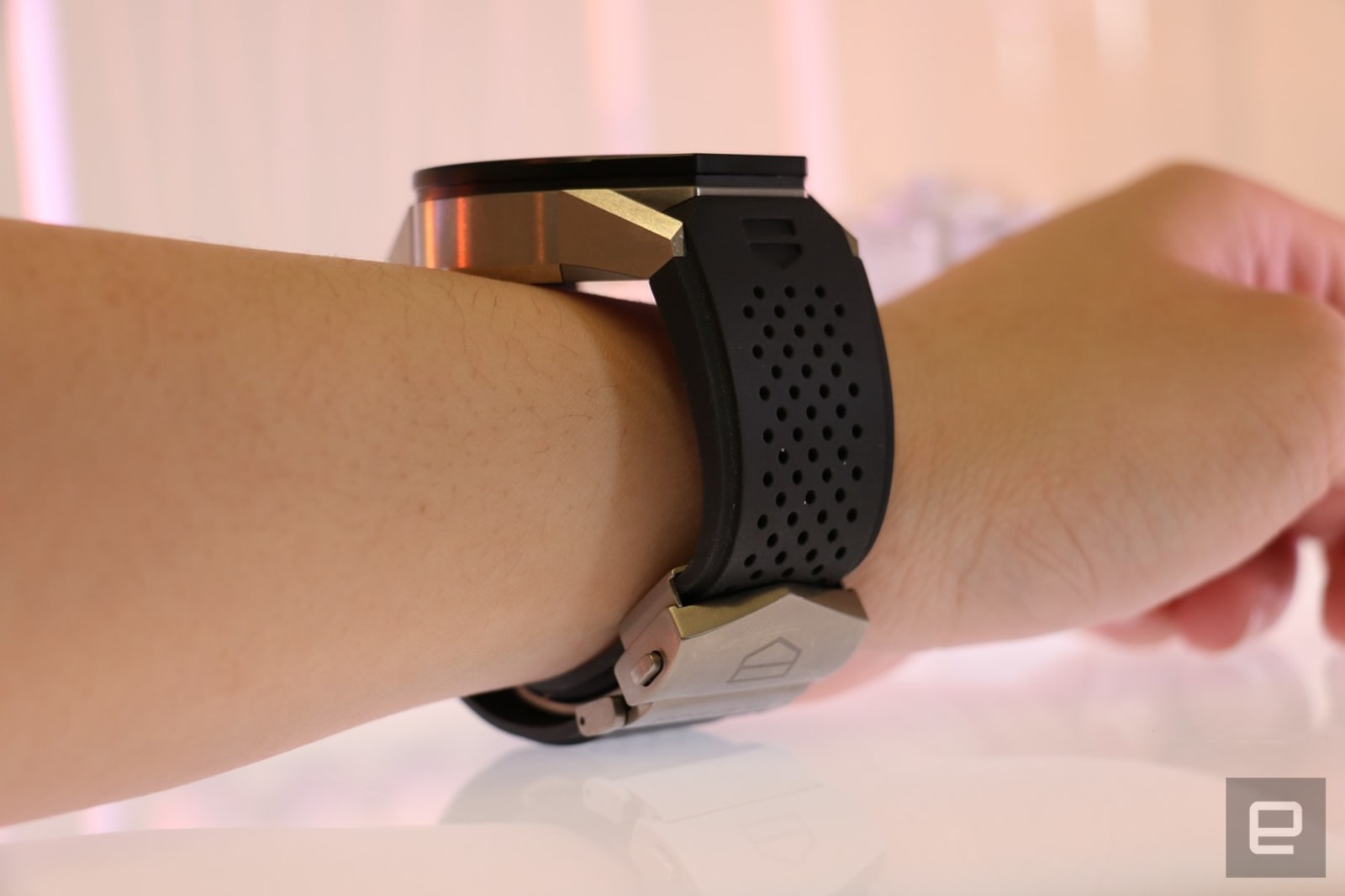 All told, the latest Tag Heuer smartwatch is another too-expensive luxury wearable that doesn't do much that cheaper Android Wear devices can't. It may still appeal to the company's diehard fans, who are likely to appreciate the deep level of customizability despite the hassle they'll have to go through for the personalization. But the only real modularity here exists in the mechanical watch unit, at least in the way that we have come to understand the concept. That component costs the same as the basic model of the Modular 45, meaning you're better off not buying the "smart" version altogether. So really, what's the point of its existence?

In this article: androidwear, androidwear2.0, engadgetIRL, gadgetry, gadgets, gear, google, mobile, smartwatch, TagHeuer, tagheuerconnected, tagheuerconnectedmodular, wearables
All products recommended by Engadget are selected by our editorial team, independent of our parent company. Some of our stories include affiliate links. If you buy something through one of these links, we may earn an affiliate commission.