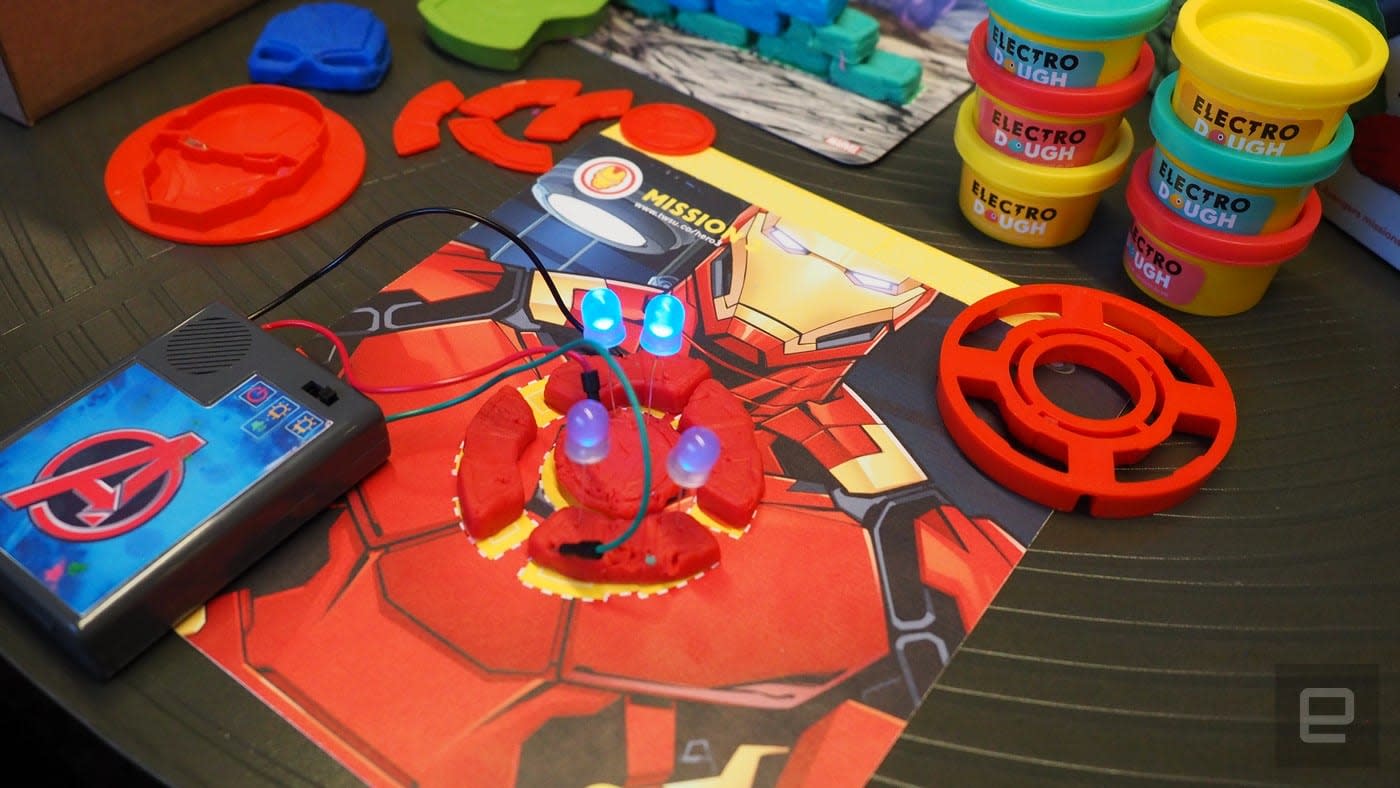 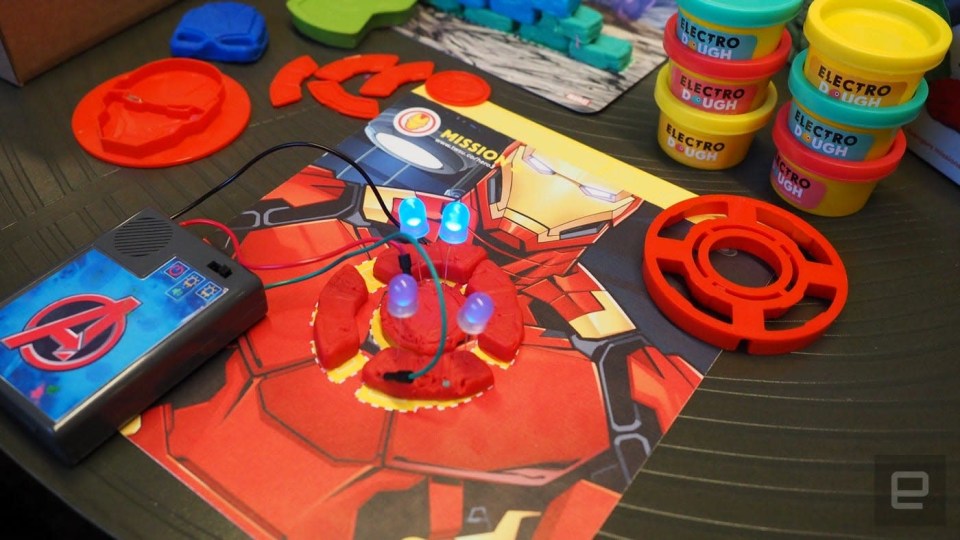 Not every child wants to be a coder or an engineer, which can make it hard to get them playing with STEM toys if they don't really care about making their own video games or building a cool robot. However, many kids are into role playing and telling stories, which is what Tech Will Save Us' newest set focuses on instead. The Electro Hero Kit asks children to build stuff to help out their favorite Marvel characters, while imparting some basic lessons about electricity in the process.

Gallery: Tech Will Save Us Electro Hero Kit | 10 Photos Tech Will Save Us is probably best known for its Dough Universe kits, which ask kids to build all sorts of electricity-powered toys out of conductive dough. Each set comes with an assortment of electrical parts and a few tubs of colorful dough. It's very similar to Play-Doh, but with a higher salt content -- if you run out, Tech Will Save Us even provides recipes on its site for making more. The sets are basically a more tactile, squishier way to teach STEM skills.

The Electro Hero Kit follows the same basic formula, asking kids to mold pieces and connect them with wires. It comes with a similar assortment of wires, LEDs and batteries too, but also a few superhero-themed molds and some custom play mats that correspond to the Hero Kit app. When kids open the app they'll be assigned small engineering tasks set within the Marvel Universe. Now their play becomes more narrative-based: instead of just saying "build something cool," it's now more along the lines of "help Captain America test his new shield." 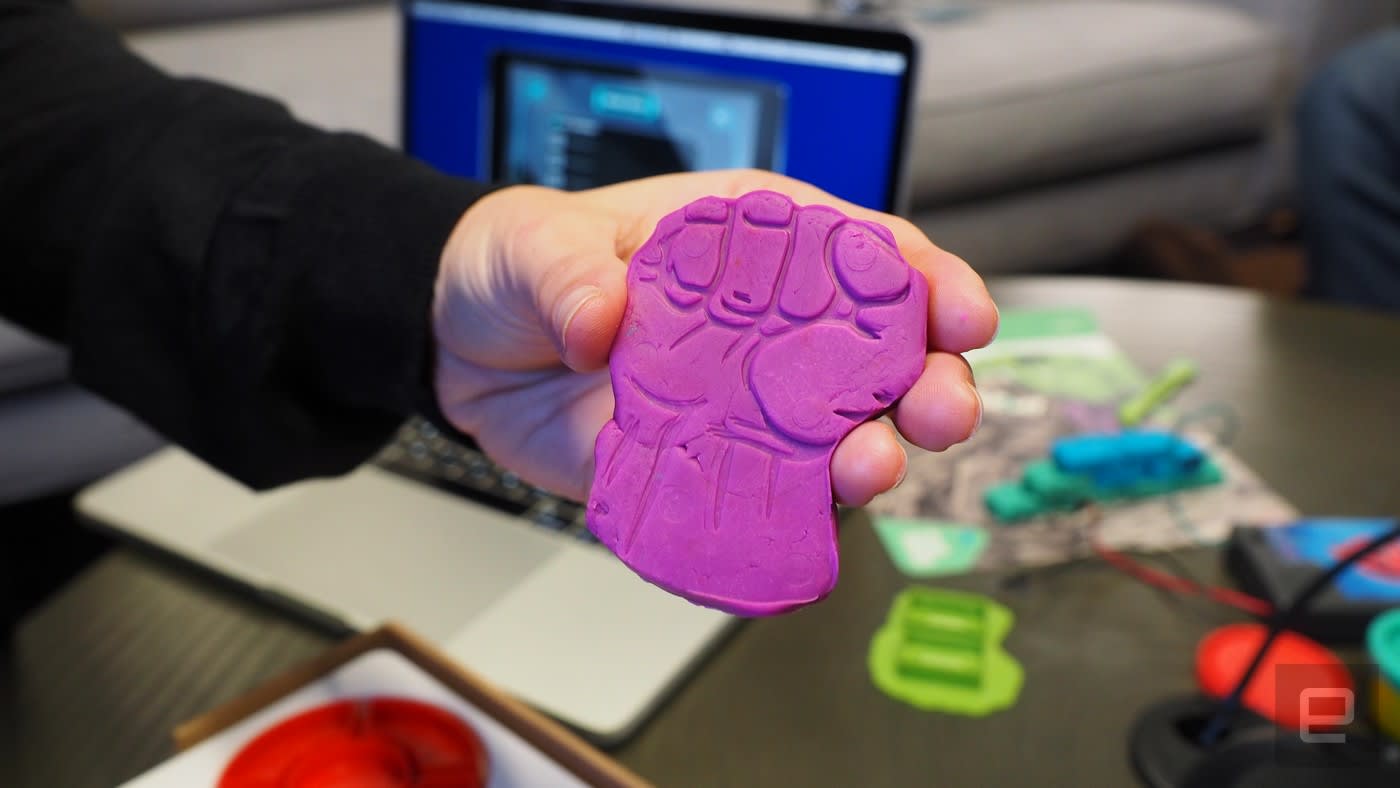 The kit was developed with some assistance from Disney and Marvel Studios, who approached Tech Will Save Us about building STEM products using popular Avengers like Iron Man, Captain America and the Hulk. Each mission outlined in the Hero Kit revolves around something that character is known for, like asking children to mold the individual bits of Iron Man's arc reactor and then connecting them with LED bulbs to create a ring of light. The Hulk task is probably the most fun: Kids create a wall of bricks and a giant green fist to smash it with, with both parts wired to a speaker. When the Hulk fist makes contact with the bricks it completes the circuit, which activates a variety of smashing and crushing noises, along with some "Hulk smash!" sound bites.

Even if kids complete all the included tasks it doesn't mean they're done with the kit: Tech Will Save Us plans to expand the app with more missions, along with additional content on its website. There's also the possibility of expansions and future kits that incorporate more characters like Black Panther. For now, though, the $35 Electro Hero Kit will hit stores March 5th, just in time for kids to watch their favorite heroes duke it out on the big screen again in May.

In this article: CaptainAmerica, design, diy, do it yourself, doityourself, DoughUniverse, ElectroHeroKit, gear, hands-on, Hulk, IronMan, Marvel, TechnologyWillSaveUs, TechWillSaveUs, ToyFair, ToyFair2018
All products recommended by Engadget are selected by our editorial team, independent of our parent company. Some of our stories include affiliate links. If you buy something through one of these links, we may earn an affiliate commission.