Fitbit's $200 Versa is a friendlier fitness smartwatch for the masses

Could this be the mass-market hit that Fitbit needs?

Fitbit's first true smartwatch, the Ionic, was an impressive attempt that lacked the polish needed to make it great. That's often how it goes for first attempts, but Fitbit has learned a few key lessons and is trying to crack the smartwatch market once more. Its weapon of choice? The thoroughly leaked $200 Fitbit Versa, a wearable clearly designed to offer a little something for everyone. Fitbit's focus on health still forms the core of the Versa experience, but after some hands-on time at an event in New York, I left with the impression the Versa could be the hit Fitbit really needs.

Part of building a smartwatch for everyone involves cooking up a design that's palatable -- or at least inoffensive -- to lots of people. The Ionic's angular, hexagonal design felt overtly gadget-y, so Fitbit adopted a rounder, kinder aesthetic in designing its latest wearable. The Versa's body is an aluminum squircle that makes the watch look and feel quite a more approachable than the Ionic. As I looked around Fitbit's spacious, rented exercise cavern, I was surprised by how great the Versa looked on the people around me -- crafting a single unisex body can be tricky, but Fitbit's choice of finishes and bands made that squircle look appropriately rad on just about everyone.

Oh, and it's slim, too. At 11.2mm thick, the Versa is the thinnest smartwatch Fitbit has ever managed to make, and the company claims it's the lightest all-metal smartwatch you'll find in the US. It didn't feel dramatically lighter than the Series 3 Apple Watch I brought along for comparison, but we'll sort that out once it's time for a full review.

A 1.34-inch square LCD sits in the middle of the Versa's body, and with brightness topping out at 1,000 nits, it was remarkably easy to read even under harsh sunlight. You'll find 4GB of storage inside, only 2.5GB of which is available for music storage (you know so that you can leave your phone at home during runs). To be clear, though, the Versa can't do everything the Ionic can. There's no built-in GPS here, for one, which helps explain why the Versa's tiny 145mAh battery is rated for over four days of use on a single charge. And Fitbit Pay, the contactless payment service supported by around 40 banks around the world, is missing from the standard Versa. To use it, you'll either have to shell out $30 extra for one of Fitbit's special edition Versas, or buy a regular Versa from overseas where the feature is enabled by default. (Go figure.) 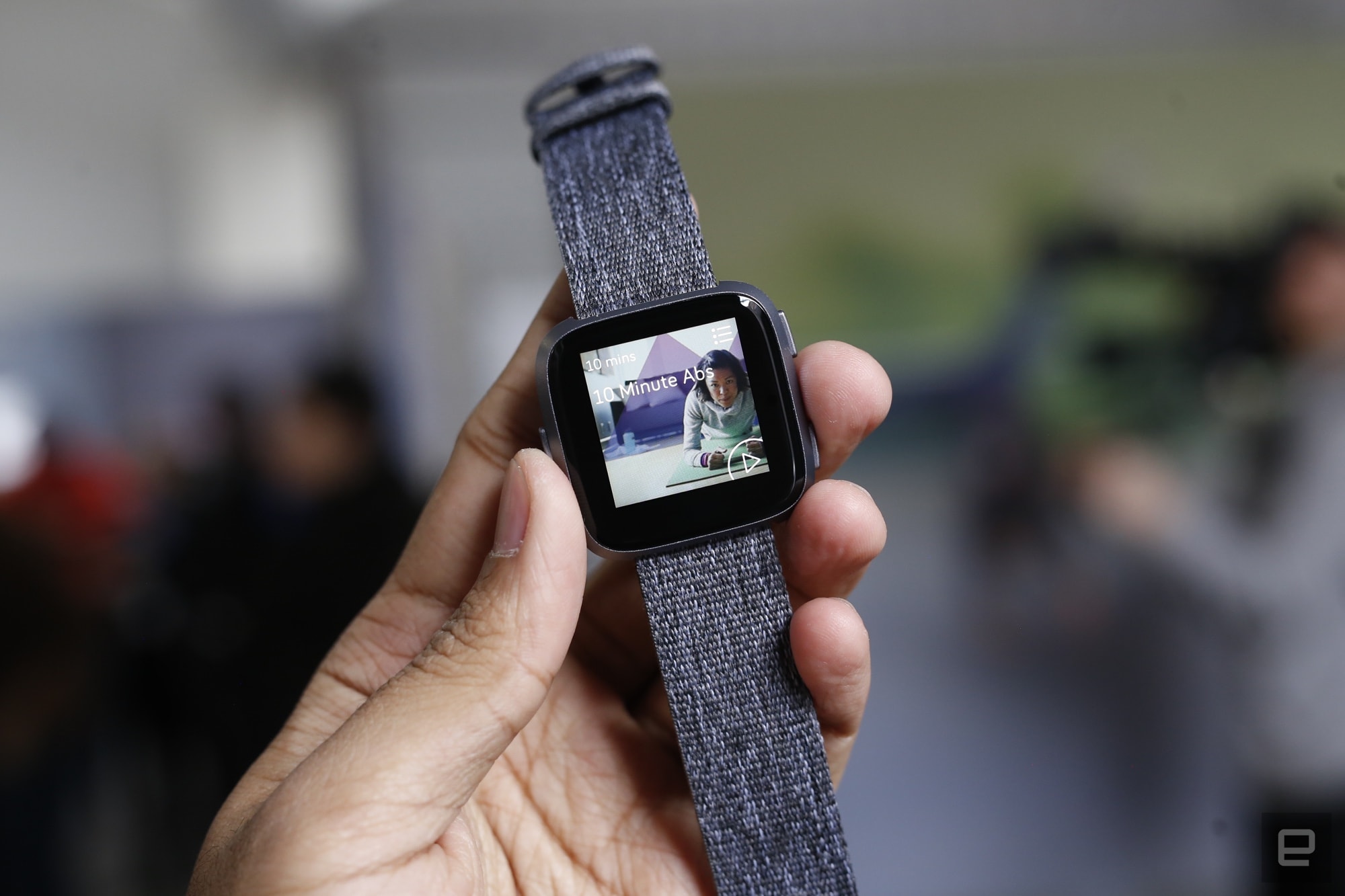 Fitbit has been coy about the processor and RAM tucked away in the Versa, but it certainly feels snappier than the Ionic did right out of the box. Swiping through the list of preloaded apps and dismissing notifications was smooth and drama-free, thanks largely to underlying updates made to Fitbit OS. Thankfully, there's more going on here than just foundational changes -- Fitbit also worked on ways to make the Versa feel more like a traditional smartwatch.

Consider notifications: on the Ionic, there was no way to respond to the notifications flowing onto your wrist. With the Versa, however, you'll finally be able to fire back with canned and customized responses... as long as you have an Android phone. (Fitbit hasn't ruled out iOS support for the feature, but lament its rival's "closed" ecosystem.) A relatively new partnership with French streaming service Deezer makes it easier to load up the Versa with custom playlists, too, and a steadily growing selection of apps means the Versa can be much more than just a fitness tracker. 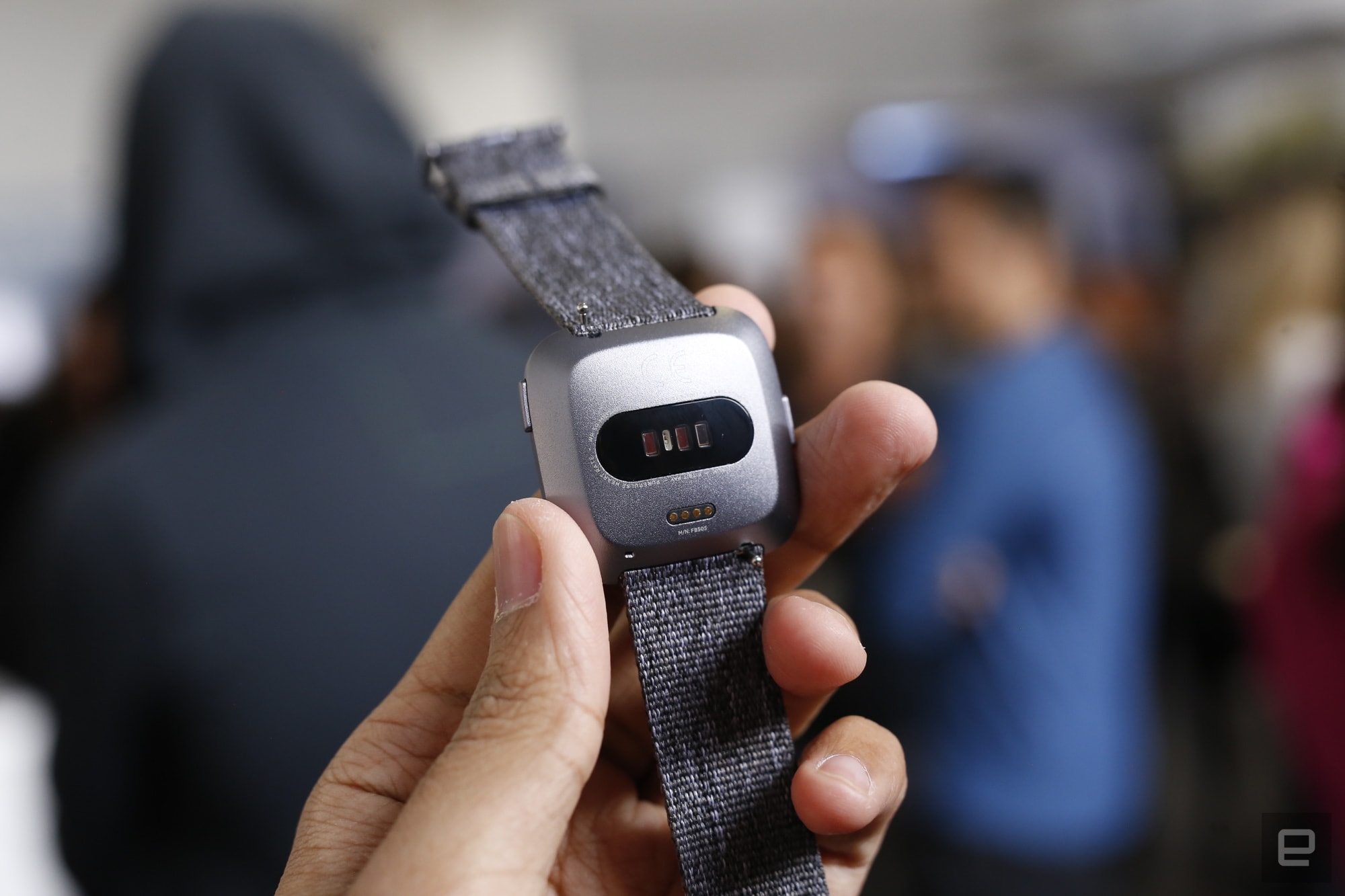 For the record though, it's an excellent fitness tracker -- just like the Ionic before it. The usual slew of sensors tracked my morning's activity as well as my Apple Watch did, though I sadly couldn't jump into a pool to see how well the swim tracking worked. Still, crucial stats were easier to take in from the watch's redesigned dashboard, and Fitbit has added (and planned) a handful of clever updates to make the Versa a more thoughtful kind of workout buddy.

I was a big fan of the guided workouts that debuted on the Ionic, for example, but they always felt pretty static -- they never got more intense as I slowly improved my health. The Versa's updated Coach app changes that: it solicits feedback about a workout after you've made it so it can upgrade those on-device exercise routines over time. Later in the year, the Versa will also gain the ability to deliver more personalized suggestions, data summaries and reminders too. One of the Versa's most important features will be available right out of the box, though. In a bid to give women a more complete picture of their health, the Versa lets users who identify as women log the intricacies of their menstrual cycle. By logging the state of their flow and the symptoms involved as they occur, Fitbit's health model can offer a countdown to a user's next period, not to mention crucial information and context to healthcare providers.

All told, the Versa takes most of what made the Ionic impressive, gave it a few coats of much-needed polish and squeezed it into a body most people wouldn't think twice about wearing. That's a pretty powerful step on its own, but Fitbit's growing commitment to thoughtfully using the data we offer to it might be the advantage Fitbit so strongly needs. We'll find out soon enough -- the Fitbit Versa goes on sale this April.