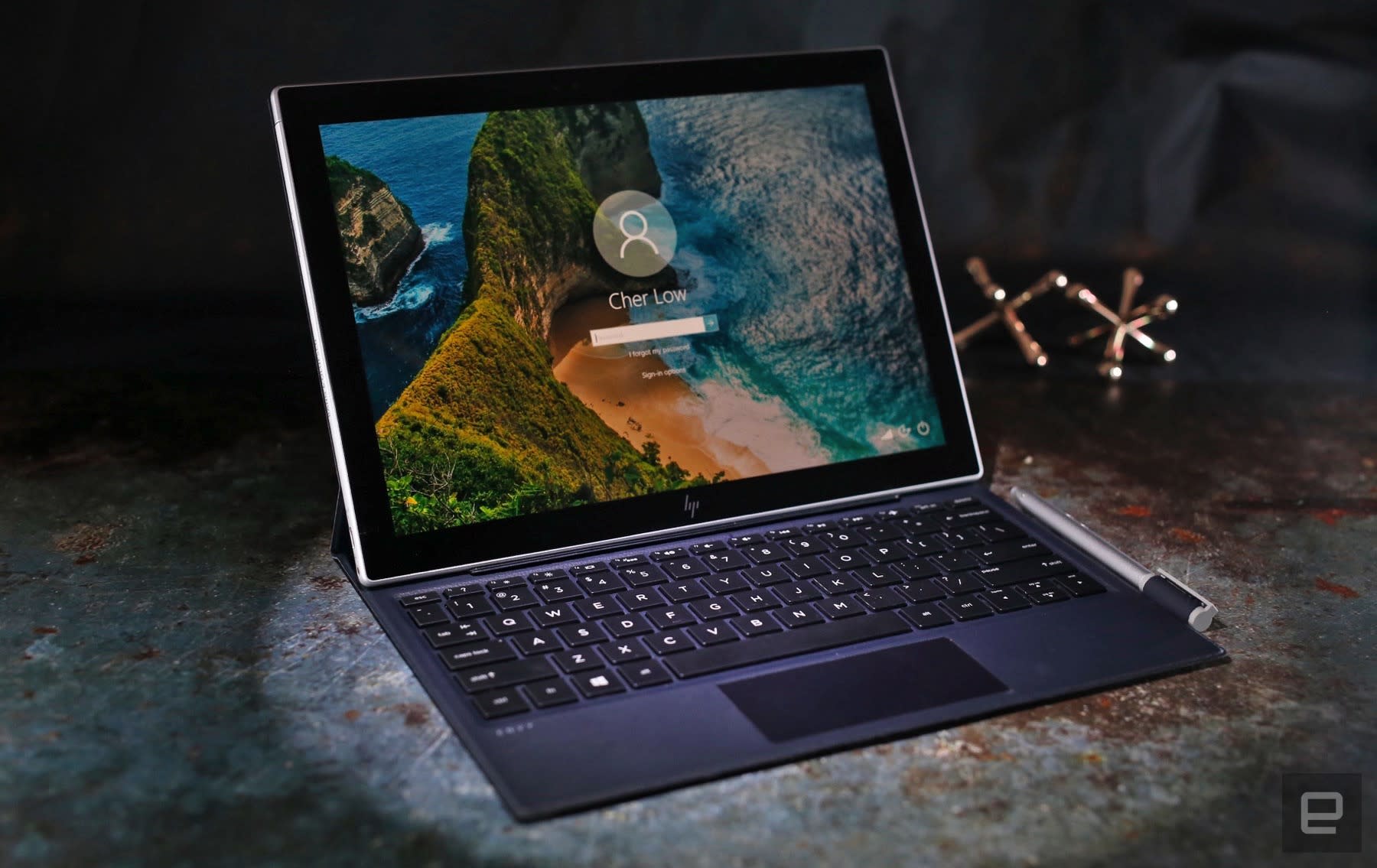 Are Intel's 'connected' PCs ready to challenge Windows on Snapdragon?

I'll admit it. I'm besotted with the idea of Connected PCs. They're Windows laptops or 2-in-1s that have built-in LTE radios so you can stay online wherever you go. So far, we've only checked out Snapdragon-powered Connected PCs, but now we've finally gotten our hands on an Intel version -- the HP Envy x2. To be clear, HP makes both Snapdragon and Intel versions of this same detachable, but we're looking at the Intel system here. 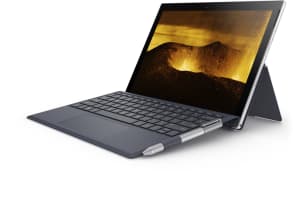 Qualcomm-powered devices run an ARM-based version of Windows. And, while they deliver super-speedy gigabit LTE and up to 20 hours of battery life, app compatibility remains a huge problem.

On the other hand, you have Intel-powered options. They use pretty standard PC chips, like a Core i5 or i7. That means they offer the same excellent performance and compatibility you've come to expect. But so far, the Intel Core i5–powered Envy x2 falls short on battery.

I have to hand it to HP: The company really knows how to make a good-looking device. The Envy x2 is a slick slab of metal with a matte silver finish on its back that makes it look modern and elegant. HP's keyboard folio needs work (more on that later), but its leathery texture is a unique and classy touch. I'm sad, though, that the touchpad is already showing signs of wear after barely two weeks of testing.

I enjoyed watching videos and getting work done on the Envy x2's 12.3-inch screen, thanks to its crisp 1,920 x 1,280 resolution and vibrant colors. It's slightly hard to read under harsh sunlight, though. Audio was also decent on the Envy x2 -- the dual speakers, tuned by Bang & Olufsen, pumped out clear, rounded sound. Should you prefer to plug in your own headphones, you'll be glad to find a 3.5mm audio jack, in addition to the two USB-C sockets, on the sides.

The Envy x2 was fine to use on a sturdy bar top or table, but it really sucked in a moving car. The folio isn't very rigid, so the screen kept threatening to topple over onto the keyboard as I wrote this review on my way to a briefing one day. It never did, but the tablet's constant wobbling gave me anxiety. 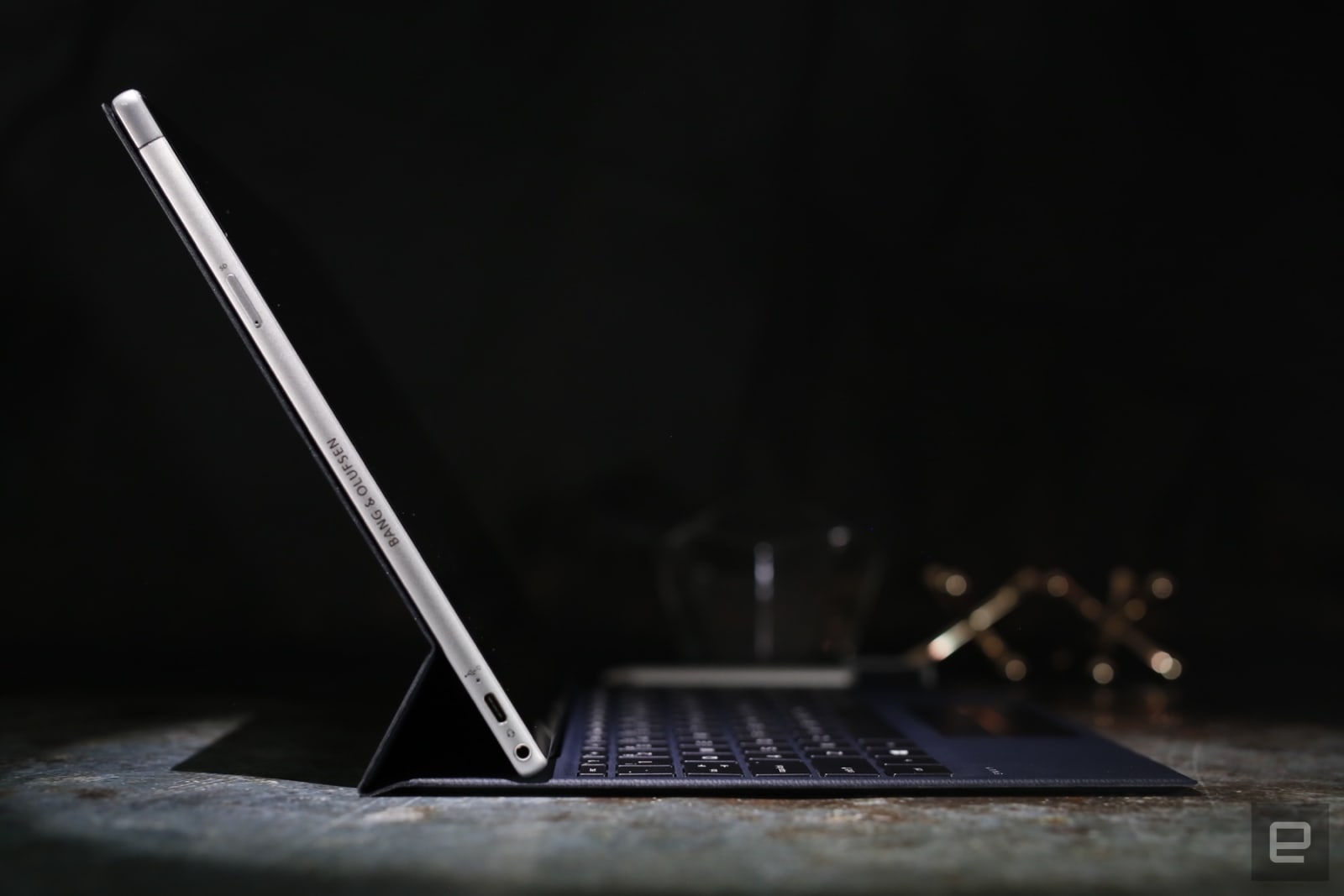 Not only that, the keyboard case itself feels a bit flimsy. When I rested my palms on either side of the touchpad, I somehow also depressed it, making the computer register a mouse click. It was impossible to get work done if I laid my hands on the case, since I ended up highlighting or dragging everything on the page. I had to resort to typing awkwardly, with my hands hovering gingerly over the keyboard. When I asked HP if I had a faulty unit, the company said that the issue "is a result of a flexible keyboard." Okay, but I haven't encountered this on similar keyboards, like Microsoft's Type Cover or Samsung's Galaxy Book 2 folio.

Those problems aside, the keys themselves have ample travel and are comfortable to use in most situations.

The touchpad was mostly smooth and responsive, though I did run into a problem. Midway through my testing, the device completely stopped recognizing two- and three-finger gestures and wouldn't let me scroll or pinch to zoom at all. Restarting the device fixed this, so far, but it's still a glitch to be aware of. I also wish the trackpad were slightly larger, but, considering its other issues, that seems like a minor complaint. 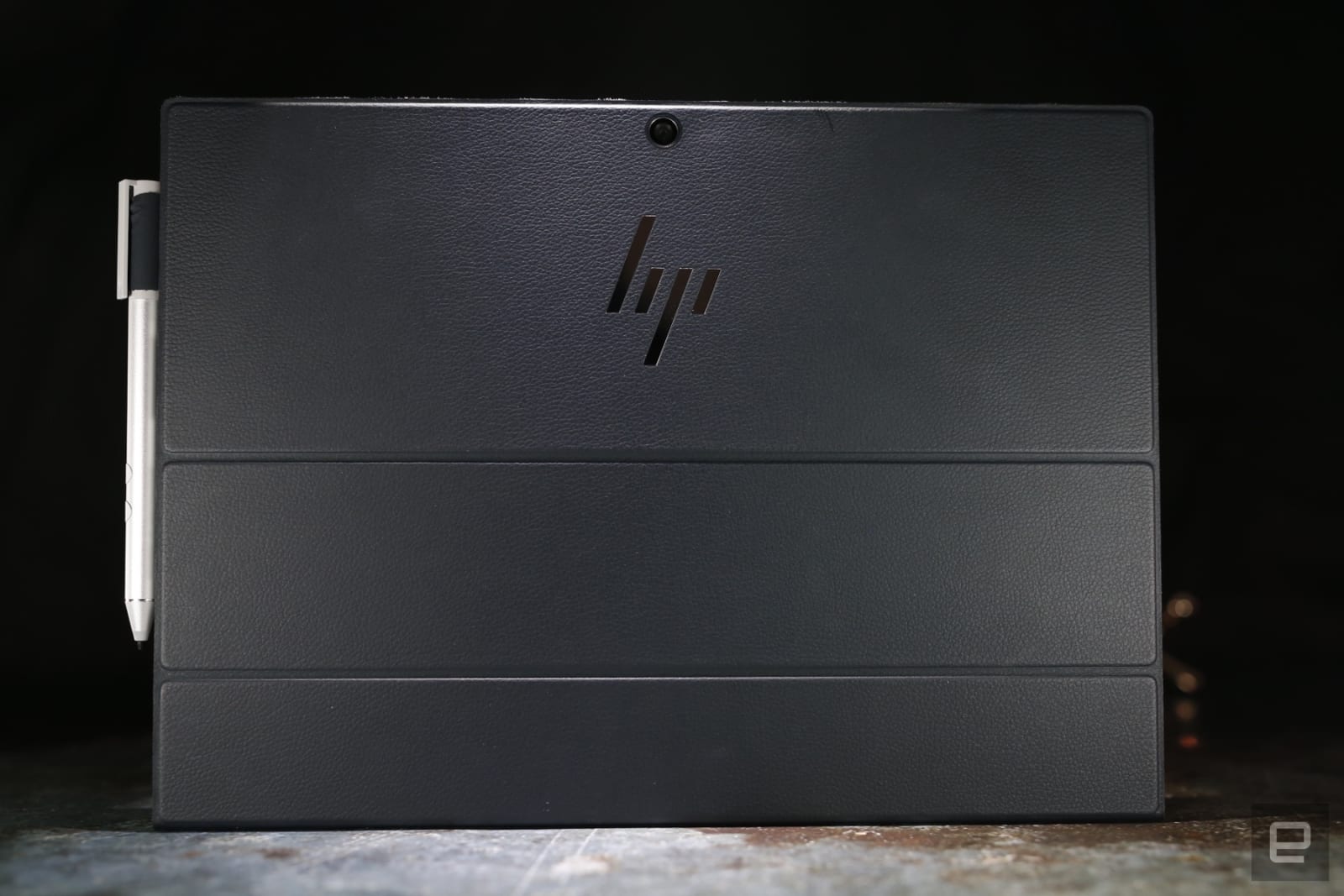 I could go on for days about the virtues of a lightweight laptop that's constantly online, but I'll control myself. I'll just say that it was a delight to be able to whip out the Envy at my favorite karaoke bar, pull up the song library and have my friends look over my shoulder instead of having to flip through crummy old folders. The Verizon SIM that came in my review unit and Intel's XMM 7360 radio provided quick downloads pretty much everywhere I went. Some videos took longer to load than on Snapdragon laptops I've tested, but overall the speeds were comparable.

I ran a few Fast.com speed tests on the Envy x2 and the Samsung Galaxy Book 2 outside the Astor Place subway station, and the two devices usually came in within 0.3 Mbps of each other. The Snapdragon device tended to hit higher peaks, but the average speeds were similar to those on the Intel-powered machine.

One of my biggest concerns with Windows on Snapdragon (WoS) is app compatibility, and here's where Intel has a huge advantage. Though Microsoft has made strides in enabling native 64-bit app compatibility for ARM-based systems, and you can get most important apps on WoS these days, there's still some noticeable emulator lag. On Intel's Connected PCs, though, I can use any program I want without worrying about performance trade-offs.

The Envy x2 also performed smoothly for the most part, though it has hung on me twice so far. Still, it smoked the Samsung Galaxy Book 2 when I used both to batch-convert a set of ten photos using Faststone Image Resizer. The HP machine managed to resize, brighten, sharpen and saturate all the images in just 12 seconds, while the Snapdragon-powered Galaxy Book 2 took two and a half excruciating minutes to do so.

Intel may have the upper hand when it comes to app compatibility, but Qualcomm's machines have the Envy x2 beat on battery life. It's not an apples-to-apples comparison, but the ASUS NovaGo lasted 14 hours on our battery test, soundly beating the HP Envy x2's 10.5 hours. Snapdragon-powered devices promise up to 20 hours of battery life in Windows 10 S mode, so you could potentially see even better results there, since I ran our tests on full Windows. The Envy x2's battery life is respectable, of course, but a few extra hours could really help you meet that deadline when you're on a transatlantic flight.

If you're considering a connected PC, you'll need to choose between Intel and Snapdragon options, and your decision will boil down to whether battery life or app compatibility is more important. For those who don't do a lot of photo editing and work mostly within a browser, Snapdragon systems will be suitable, while everyone else should consider Intel machines like the Envy x2.

There are quite a few Intel alternatives available, from brands like Lenovo and Acer, but sadly we haven't gotten around to testing any of them and can't vouch for their performance and battery life. If you spot one with the same Intel XMM 7360 radio and Core i5 configuration, though, chances are you'll get similar LTE speeds and performance with these other systems. 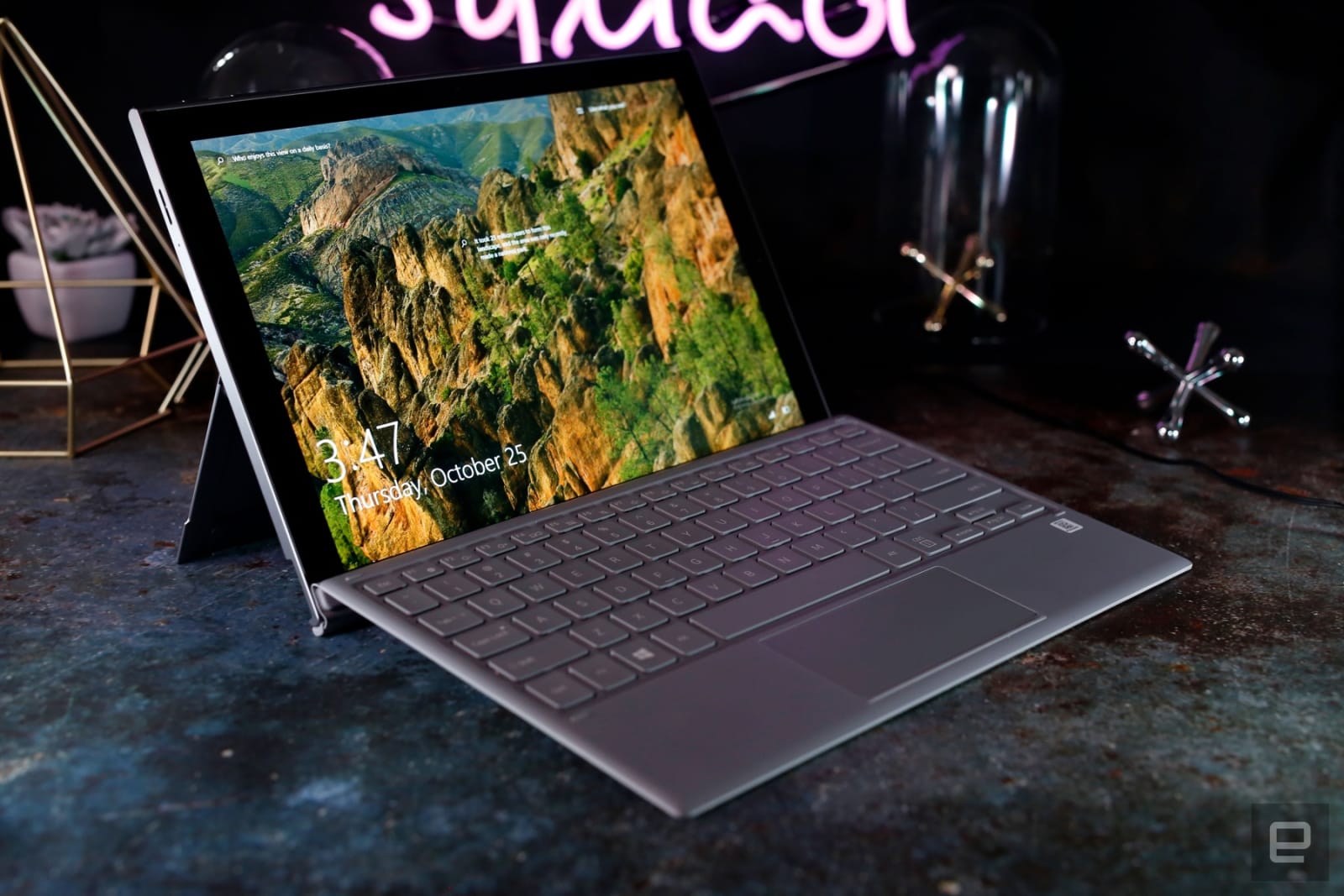 On the Snapdragon side, you'll find more affordable options like the Lenovo Miix 630 detachable and the ASUS NovaGo laptop, both of which use the older Snapdragon 835 CPU. Meanwhile, the Galaxy Book 2 uses a faster Snapdragon 850 chipset, but it costs a whopping $1,000 (keyboard and S Pen included). The Intel-powered Envy x2 is slightly cheaper, starting at $899, and includes the terrible keyboard.

If you're simply looking for a good detachable, consider the Surface Pro 6. It's a powerful, long-lasting workhorse that comes in a stylish matte black finish. The only drawback is that it doesn't have built-in LTE (yet), but in every other regard it's a superior device.

I started this review wanting to find out which is better: an Intel Connected PC or a Snapdragon version. I don't have a definitive answer yet, largely because none of the devices we've reviewed are perfect and each has compelling advantages. The Intel-powered HP Envy x2 is a better option than its Snapdragon counterpart for most folks, since it offers decent battery life and, more important, has much better app compatibility. But due to a terrible keyboard folio and odd glitches, the Envy x2 fails to deliver on the always-connected PC promise.