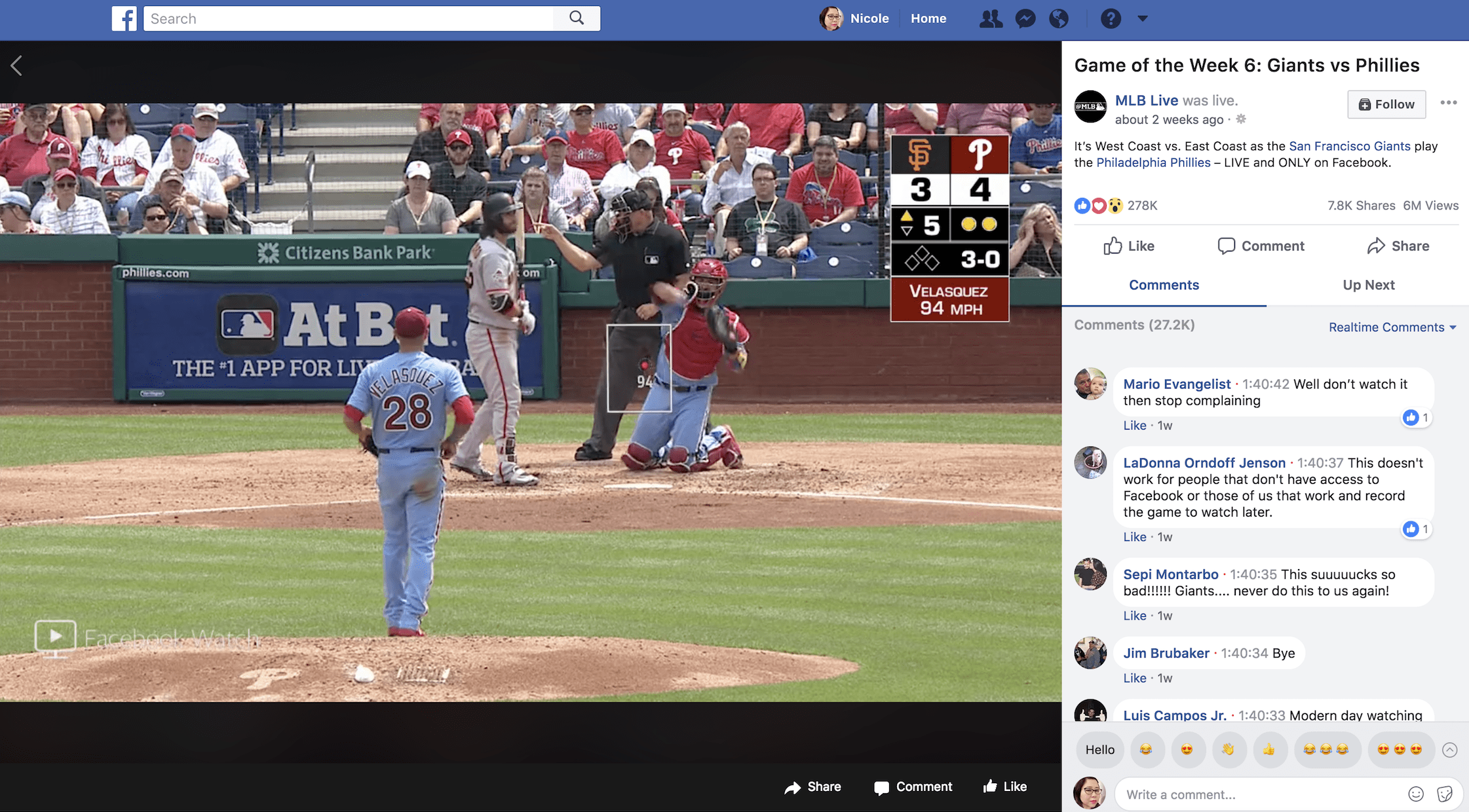 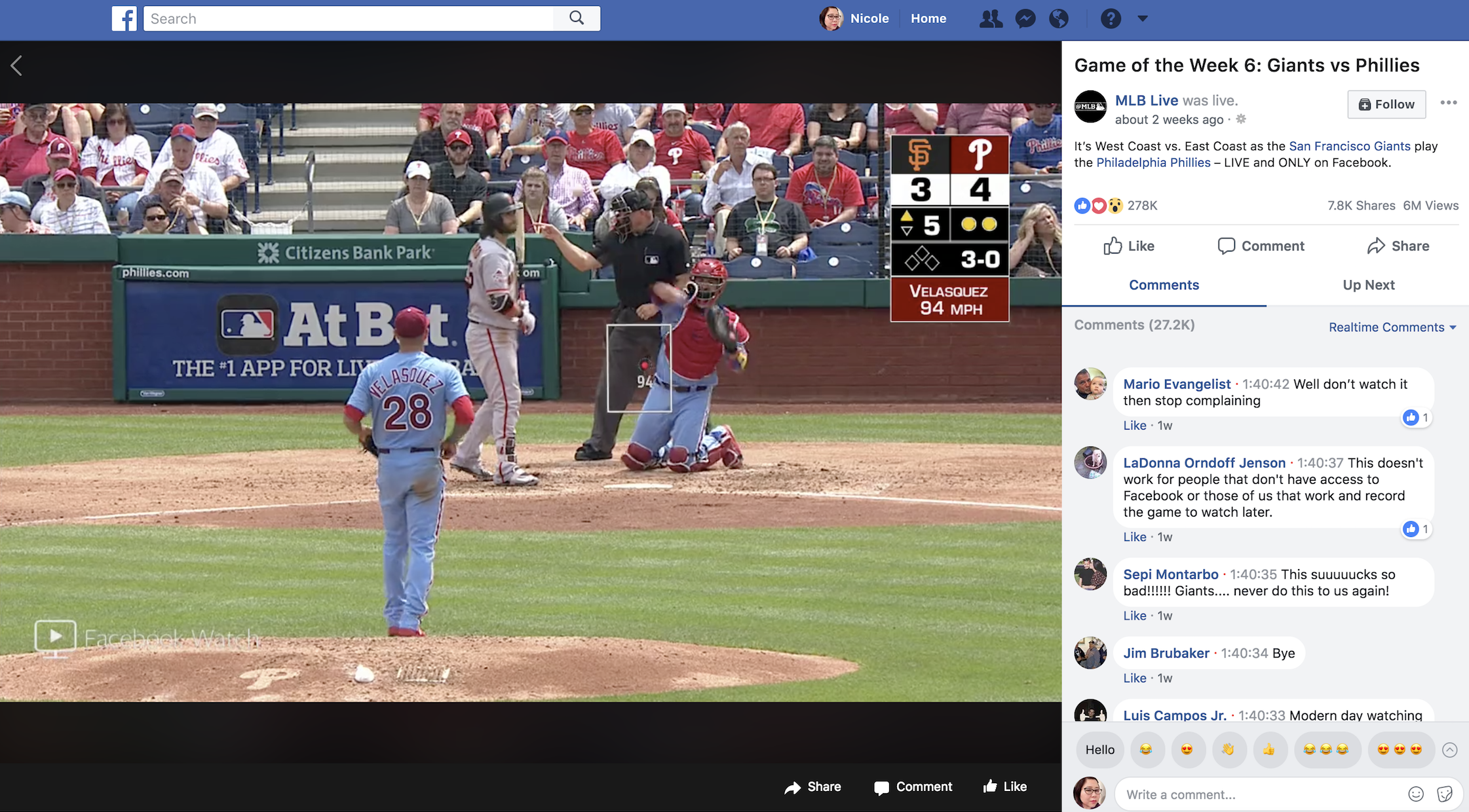 On Thursday May 24th, the Los Angeles Angels of Anaheim will face the Toronto Blue Jays in Rogers Centre for the third time this year. The game will air at 12:37 p.m. ET, so if you're a diehard Angels or Blue Jays fan and you'll be working during that time, you might want to set your DVR to watch it later ... except you can't. That's because it's one of the 25 games that Major League Baseball has selected to air exclusively on Facebook in 2018. This will be the eighth such game aired on Facebook Watch this year, and so far, not a lot of fans are pleased about it.

A couple of months ago, Facebook and Major League Baseball struck an unprecedented deal in US sports, in which the social network was granted exclusive streaming rights to those aforementioned 25 games. And they really do mean exclusive: Those shows won't be available on any broadcast channel anywhere. You can't watch them live on MLB.TV either, though you'll be able to view them 90 minutes after the game is over. Even that's assuming you have an MLB.TV subscription, which starts at around $90 a year. So really, the only affordable way you could watch any of these games is to have a Facebook account.

The fact that the @Phillies game is ONLY on facebook tonight is wack. My dad is the biggest fan and has no clue how to work facebook and why would i want to watch the game on my little phone or laptop screen?! @MLB

This isn't the first time the two organizations have worked together. Last year, Facebook streamed 20 MLB games on Friday evenings. But they weren't exclusive; they were really just simulcast streams from local broadcasts. Now, not only are these MLB broadcasts only on Facebook, they're actually produced specifically for the platform -- complete with Facebook Watch-branded microphones and a "social media reporter" who addresses comments and questions from the crowd (even relaying them during interviews with players and managers). The idea being that as the game is on Facebook, the broadcast can be more interactive and engaging. Sort of like a Twitch stream, but with live sports.

In theory, this deal shouldn't be bad for fans. All 25 games selected as Facebook exclusives are on weekday afternoons, which typically have lower viewership anyway. They're also the games where fans are more likely to check in on via their computer or mobile devices because they're usually at work. And, hey, the Facebook games are free, with no blackouts -- if you were to watch local games on MLB.TV, for example, it'd push you towards the traditional broadcast instead. There are also no commercials to deal with.

This is bullshit. I haven't had a Facebook in 3 years and the only way to watch the game is through Facebook. Put the game on YOUR tv station. Or at least give another option to watch the game. @Mets put all your games on tv from now on. https://t.co/hWr8vJf2LS

Reactions, however, have not been kind. On the inaugural Facebook game on April 4th between the New York Mets and the Philadelphia Phillies, fans from both teams took to Twitter to express their anger. Zack McNulty, a Mets fan from Connecticut, tweeted: "This is bullshit. I haven't had a Facebook in 3 years and the only way to watch the game is through Facebook." Katie Rigg, a Phillies fan, tweeted: "The fact that the @Phillies game is ONLY on facebook tonight is wack. My dad is the biggest fan and has no clue how to work facebook and why would I want to watch the game on my little phone or laptop screen?"

A Twitter account called MetsAvenue found a way around the tiny screen: "This whole move with the Mets game being aired exclusively on Facebook is ridiculously stupid. With that said, here I am logged into Facebook on my laptop that is connected to my TV via HDMI, ready for Mets baseball." Alternatively, Facebook has suggested that you can download the Facebook video app on your smart TV or streaming device, or you could stream it to your TV via Chromecast.

WHY ARE YOU DOING ANOTHER STUPID FACEBOOK LIVE BROADCAST OF A FUTURE GAME????? DID YOU NOT LEARN FROM OR READ ALL THE NEGATIVE UNHAPPY COMMENTS FROM US YOUR FANS THAT PAY TO GET SPORTSNET TO WATCH THE GAME IN HD N 4K???

This stream of negativity wasn't unique to the Mets vs. Phillies game either. Every week since, a litany of fans have criticized MLB for the decision, especially in light of Facebook's recent Cambridge Analytica scandal. "Never Facebook, never will," K. Rudolph tweeted in response to a recent Facebook-exclusive San Francisco Giants vs. Phillies game. "MLB is out of their minds to present the national pastime in a manner that forces use of an out-of-control social media."

In response to this week's Angels vs. Blue Jays exclusive, another fan tweeted that he's not able to watch it because he doesn't have a Facebook account. "Is this how you want to alienate some fans?" he said. Sports journalists and commentators didn't let Facebook off the hook, either, with commentary that ranges from calling the decision "monumentally stupid" to a "total joke."

This is just monumentally stupid. Wake the eff up, @mlb. Nobody wants this. Nobody. https://t.co/4auDZY9vrS

For my part, I was surprised by how little outreach Facebook did to get me to watch the games. I'm an unabashed fan of the San Francisco Giants and have "liked" the Giants page on Facebook. Yet I received no ads or notifications about when the Facebook game was on. Facebook told me that if I were to "follow" the MLB Live page on Facebook, I'd get notifications for it, but I'm not sure why I'd do that -- I don't want to watch just any baseball game; I want to watch the games with my favorite team.

The viewing experience on Facebook is a little mixed, too. The flying emojis on the screen and the never-ending scroll of comments is annoying. Imagine watching a game at a stadium but with everyone in the park just yelling at you or waving emojis in your face. Those comments aren't all safe for work, either; there have been cases of spam and porn bots infiltrating these live broadcasts, which Facebook says it's trying to crack down on. Facebook also says you can "hide" the comments by enabling quiet mode, but it's not immediately obvious how to do this. Plus, if you disable this so-called interactivity, what's the point of watching it on Facebook in the first place?

The @facebook telecast Mets-Phillies game is LOL-bad. Epically amateurish and tedious. If you want to put it online and cover it with gigantic pointless graphics and inane commentary, have fun. But don't make it exclusive. The world is fleeing Facebook; MLB is embracing it?

According to MLB, however, things aren't all bad. MLB Commissioner Rob Manfred said at a recent business summit that the live streams on Facebook are "a great experiment" and that the audience for these afternoon games has skewed about 20 years younger than normal broadcasts. "I expect we will move forward with Facebook," he said. "I think that we will continue to refine the offering in order to test how effective that platform can be in terms of delivering our games, particularly to fans that may not be engaged with the traditional broadcast offering."

There were fans that took to Twitter to say they actually liked the experience. Clayton Hall III said he liked being able to watch the Texas Rangers vs. Seattle Mariners game on May 16th without having to pay anything, and Adam C. Profitt tweeted that everyone needs to stop complaining and to get with the times. A look at the MLB Live Page on Facebook shows that most of these weekly games have received well over 3 million views each, so obviously people are watching; likely because there's not much choice.

Everyone needs to stop complaining about baseball on Facebook. It's an afternoon game. Most people are working. If you not, it's couple of clicks. And it's 2018 get with the times. #MLB #phillies

It's understandable that MLB wants to experiment streaming on new platforms and to reach younger audiences, and the interactivity idea is actually not a bad one. In that first Mets vs. Phillies broadcast, for example, Facebook removed on-screen graphics on the fly after several complaints from fans, which is not really possible in a traditional broadcast.

The problem here is the exclusivity angle. Considering how many people have soured on Facebook, having the social network be the only place to watch their favorite baseball team is really not a good look. If you want to experiment around with a new interactive streaming format, that's fine. But you shouldn't have to force people into it.

In this article: baseball, entertainment, facebook, gear, internet, mlb
All products recommended by Engadget are selected by our editorial team, independent of our parent company. Some of our stories include affiliate links. If you buy something through one of these links, we may earn an affiliate commission.