It weighs just 2.5 pounds and still has dedicated graphics!

It's already clear that 2019 is going to be a big year for intriguing gaming laptops. But ASUS's ZenBook S13 proves that even ultraportables are in for some wild changes. It's a 2.5-pound laptop with one of NVIDIA's dedicated GPUs, which absolutely trounces the integrated graphics plaguing most light notebooks. And it packs all of that power in a sleek frame with some of the thinnest screen bezels I've ever seen. The ZenBook S13 is close to being the laptop of my dreams, one that's incredibly light, but that can also play some games.

When we reviewed the Zenbook S last fall, we found it to be a pretty standard lightweight laptop. It looked fine, but the screen was dull, and there just wasn't much to distinguish it from the competition. The S13 takes that basic design, and upgrades it in a few key ways. It keeps the sleek metallic case, but shaves down the screen borders considerably, leaving behind a glorious 13.9-inch 1080p display that practically floats above the keyboard. And the bottom tucks beneath the keyboard when you open it up, leaving it completely out of sight. 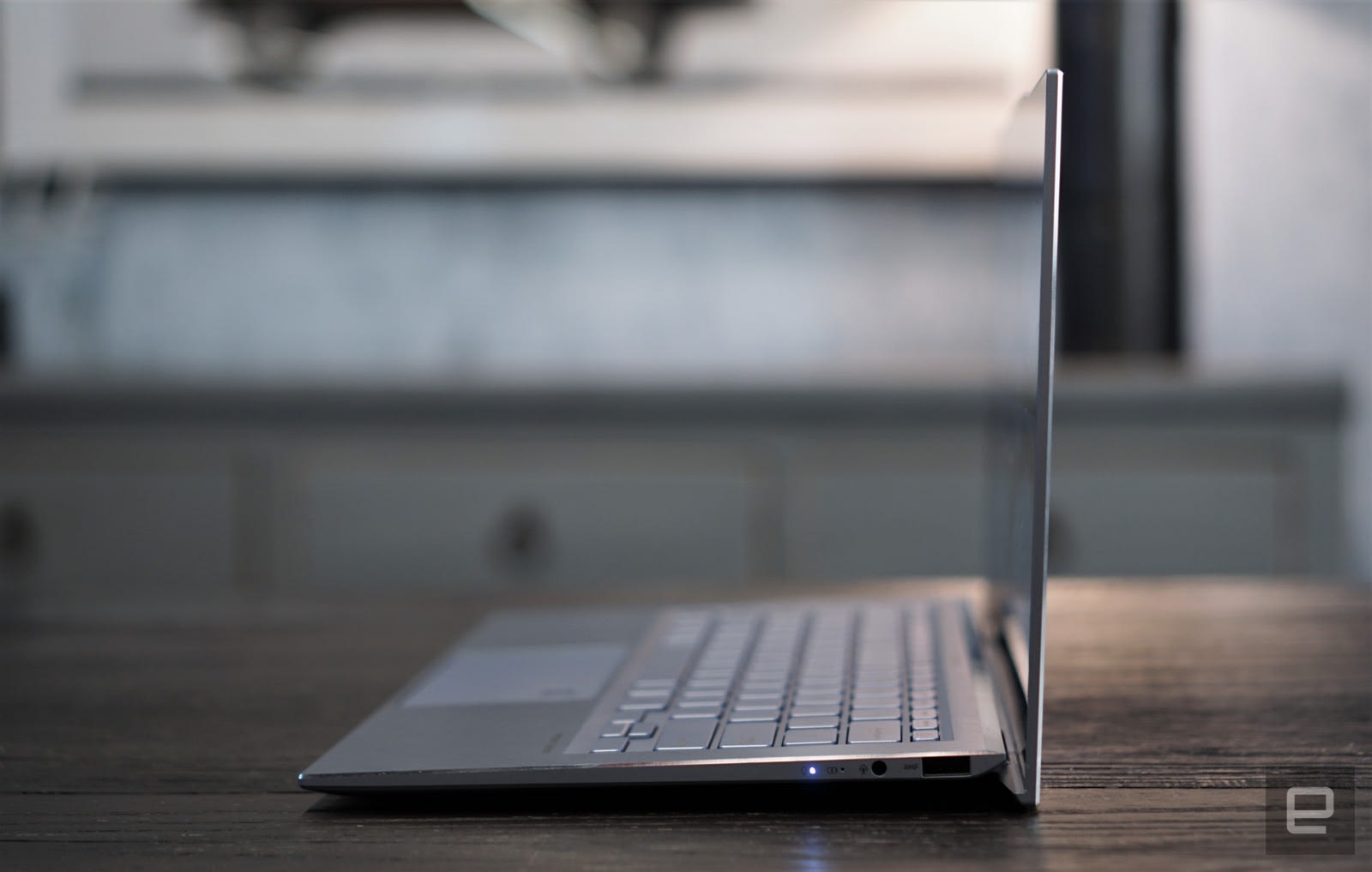 The large screen offers you much more real estate than the 13.3-inch screens in similarly sized laptops. And it delivered bold colors and more than enough brightness while I was playing games and watching movies. But I'd suggest getting some headphones if you're gonna use this as your primary media machine. The S13's downward firing speakers sound decent considering how thin the laptop is, but it's sometimes tough to hear when the laptop's fan is blasting. 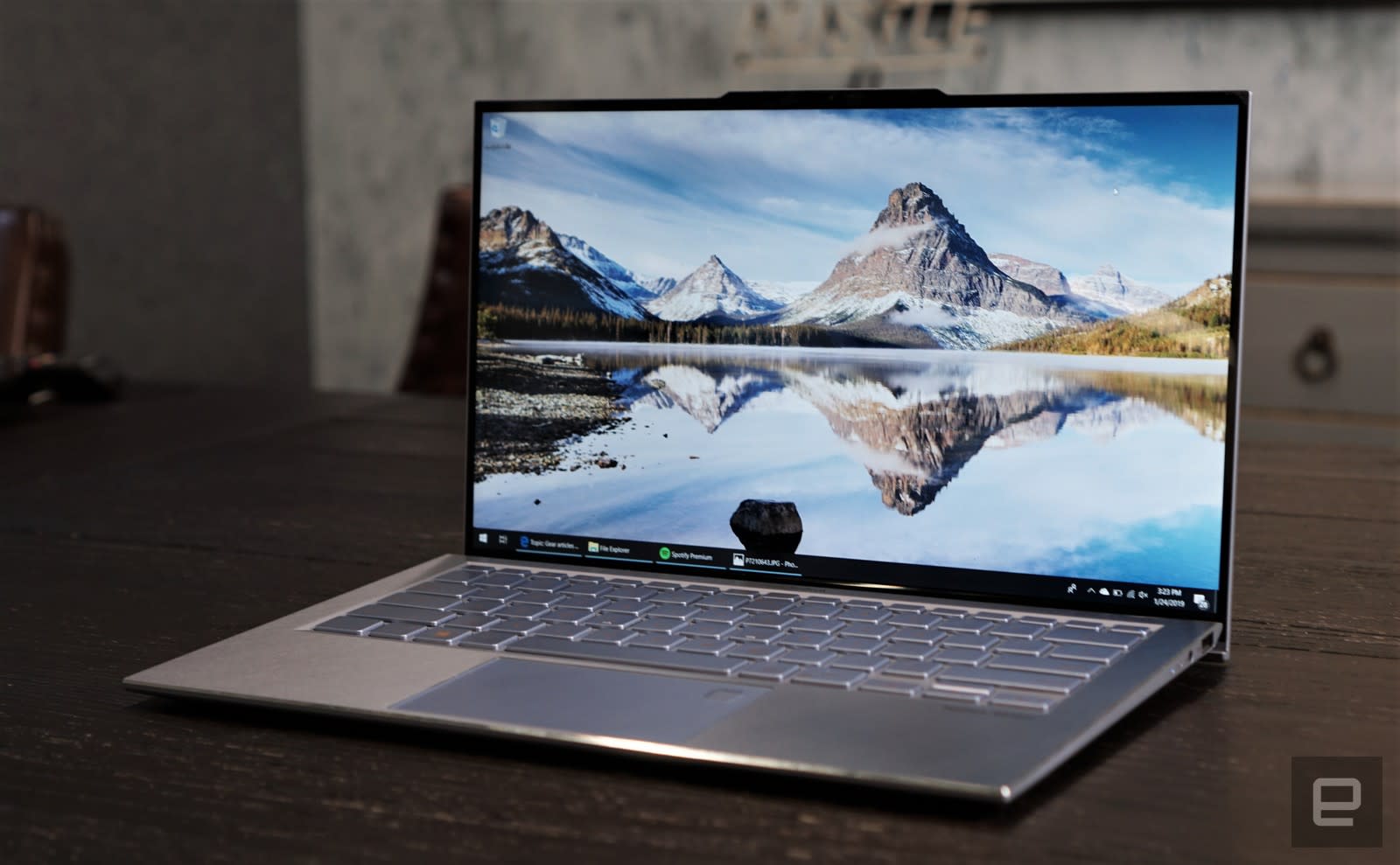 ASUS claims it has the thinnest bezels around, measuring 2.5mm thick. They're certainly slim, though Dell's latest XPS 13 is a fraction of an inch thinner, and it has the advantage of a Dolby Vision display option. There's a slightly raised notch at the top of the S13's screen to fit in the webcam. It gives the laptop a unique silhouette that I dig, but I've heard from plenty of people who find it ugly. That notch also gives you an easy way to open up the S13, but it seems like you're just asking for fingerprint smudges on the camera.

Unfortunately, the webcam stinks when it actually comes to capturing video and taking photos. Everything just looks muddy and lifeless, with very little detail. If you actually care about the quality of your video chats, you'll want to invest in a separate webcam here.

What's really exciting about this laptop, though, is ASUS managed to cram in dedicated NVIDIA graphics. It's not the powerful GTX and RTX hardware we're seeing on true gaming laptops, but the MX150 GPU in the S13 is a huge leap over integrated graphics found on Intel's CPUs, which can barely play any games.

The MX150 has been showing up in notebooks since it launched in 2017, including last year's Zenbook 13 and Razer Blade Stealth. But those machines all weighed closer to 3 pounds -- while the S13 is only a bit lighter, it's still a notable achievement for ASUS. 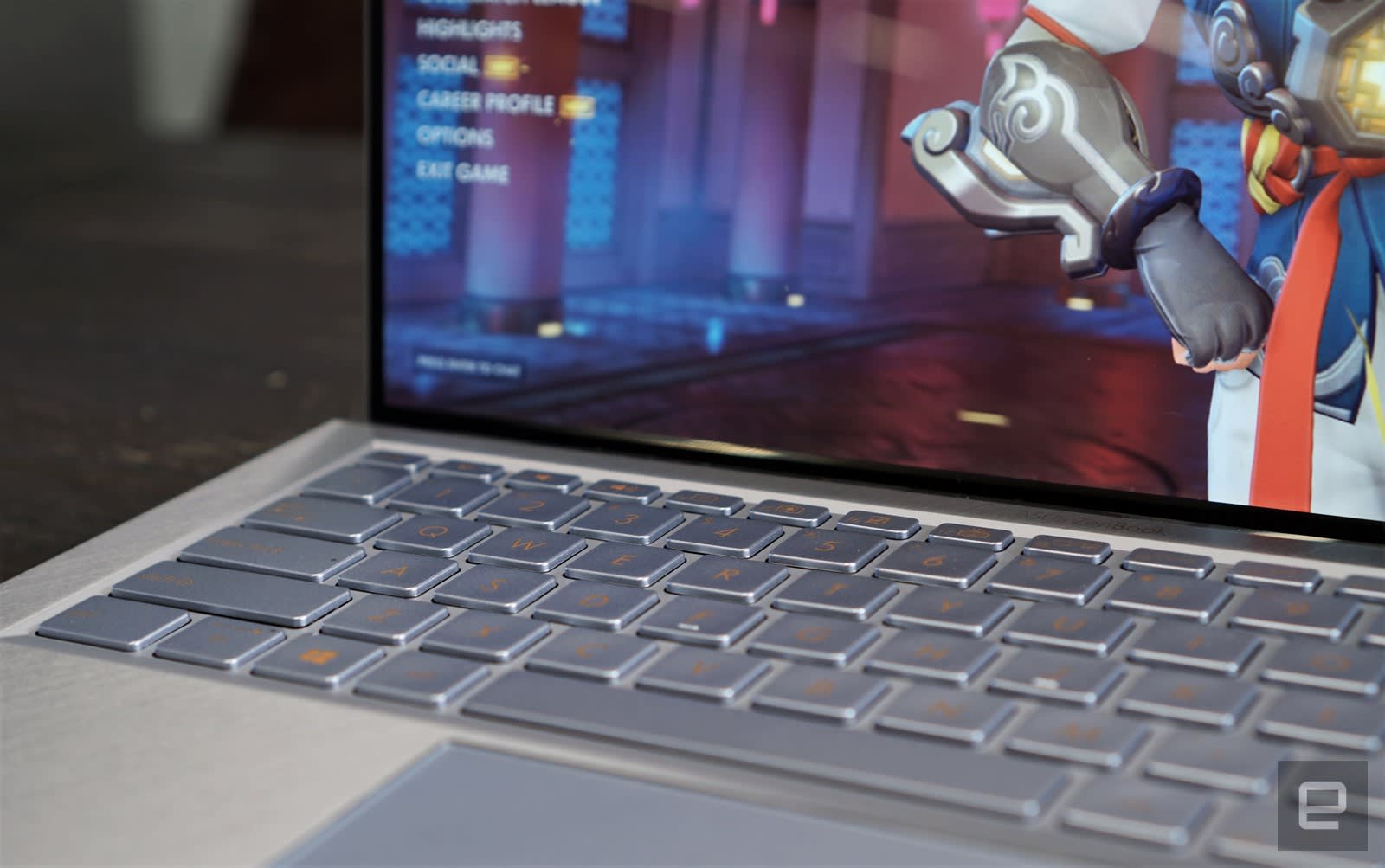 While playing Overwatch in 1080p, I saw between 40 and 50 frames per second with medium graphics. And when I dropped the graphics down to a lower quality setting, the framerate jumped up to between 60 and 70 FPS. I eventually settled on a slightly lower 1600 x 900 resolution with medium settings for the best balance performance and graphics quality and saw a steady 70FPS -- it looked good and played smoothly. Overwatch is so well optimized that it's playable even with integrated graphics, but not nearly as well as the S13.

Of course, most gaming notebooks these days can get you upwards of 100 FPS in Overwatch at 1080p, but they all weigh upwards of four and a half pounds. The ZenBook S13 clocks in at about half that weight. It's a solid choice for anyone looking for a light machine that can still give them a frag fix. The system choked a bit on more complex games, though. I only saw between 24 to 30 FPS in Forza Horizon 4 at 720p, no matter the graphics settings. In Destiny 2, it was more playable, reaching 35 to 50 FPS in 720p. Still, if it's fast enough for Overwatch, the S13 should be more than enough for less demanding titles like The Sims 4.

Since the Zenbook S13 handled some games easily, it had no trouble dealing with my usual workflow. That involves juggling dozens of Chrome and Edge tabs, editing huge photos, and streaming either Netflix or Spotify. Our review unit featured an Intel Core i7-8565U CPU, 16GB of RAM and a 512GB NVMe SSD, so it's pretty capable even without the NVIDIA GPU. Across all of our benchmarks, the S13 easily kept up with the XPS 13 and Surface Laptop 2, but thanks to the MX150 GPU it scored two to three times higher in 3DMark. (It's also clear to see just how far that graphics card lags behind the more powerful GTX 1070.) 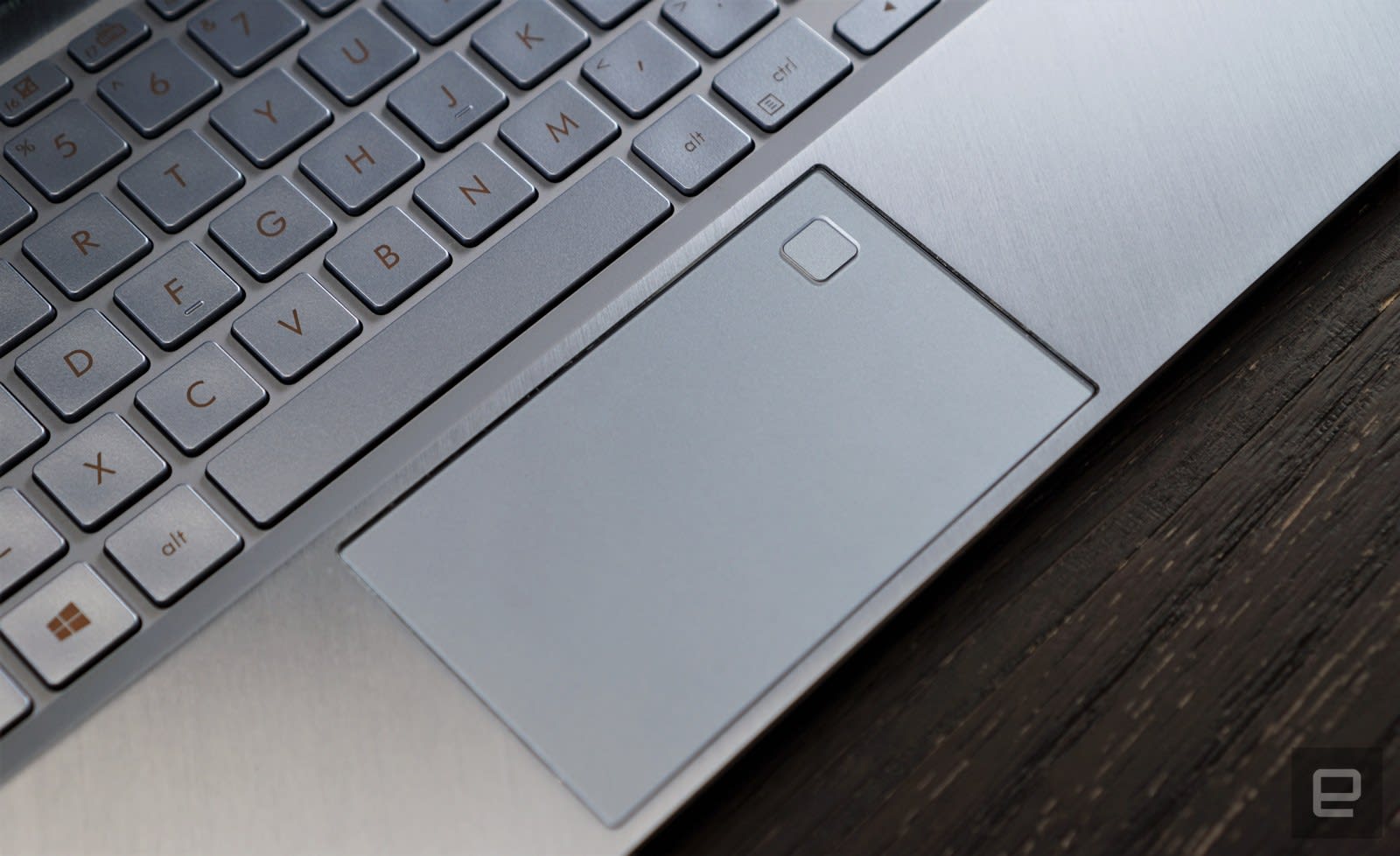 The S13's keyboard and trackpad were also solid. Typing felt great, with a solid amount of key travel and responsiveness. And the trackpad was on par with what we've seen from recent Windows notebooks. I just wish ASUS moved the fingerprint sensor away from the upper right corner of the trackpad, where it tends to get in the way. While I appreciated being able to log into Windows quickly with my finger, that's something ASUS could have placed just about anywhere else.

As for ports, this laptop has most of what you'd want: 2 USB-C connections for charging, and a USB 3.1 Type A connection for older devices. There's also a microSD card slot, though I really wish it was a full-sized, which would make it much easier to offload photos from my camera. ASUS also bundles a minidock with USB-C, USB-Type A and HDMI ports. Unfortunately, we didn't get one with our review unit.

Battery life is usually the downfall of powerful ultraportables, but the ZenBook S13 lasted 12 and a half hours in our test, which involves looping an HD video until the computer dies. It lasted around six hours in real world usage, which is similar to what we've seen from others like the Surface Laptop. But of course, playing games lowers that significantly. 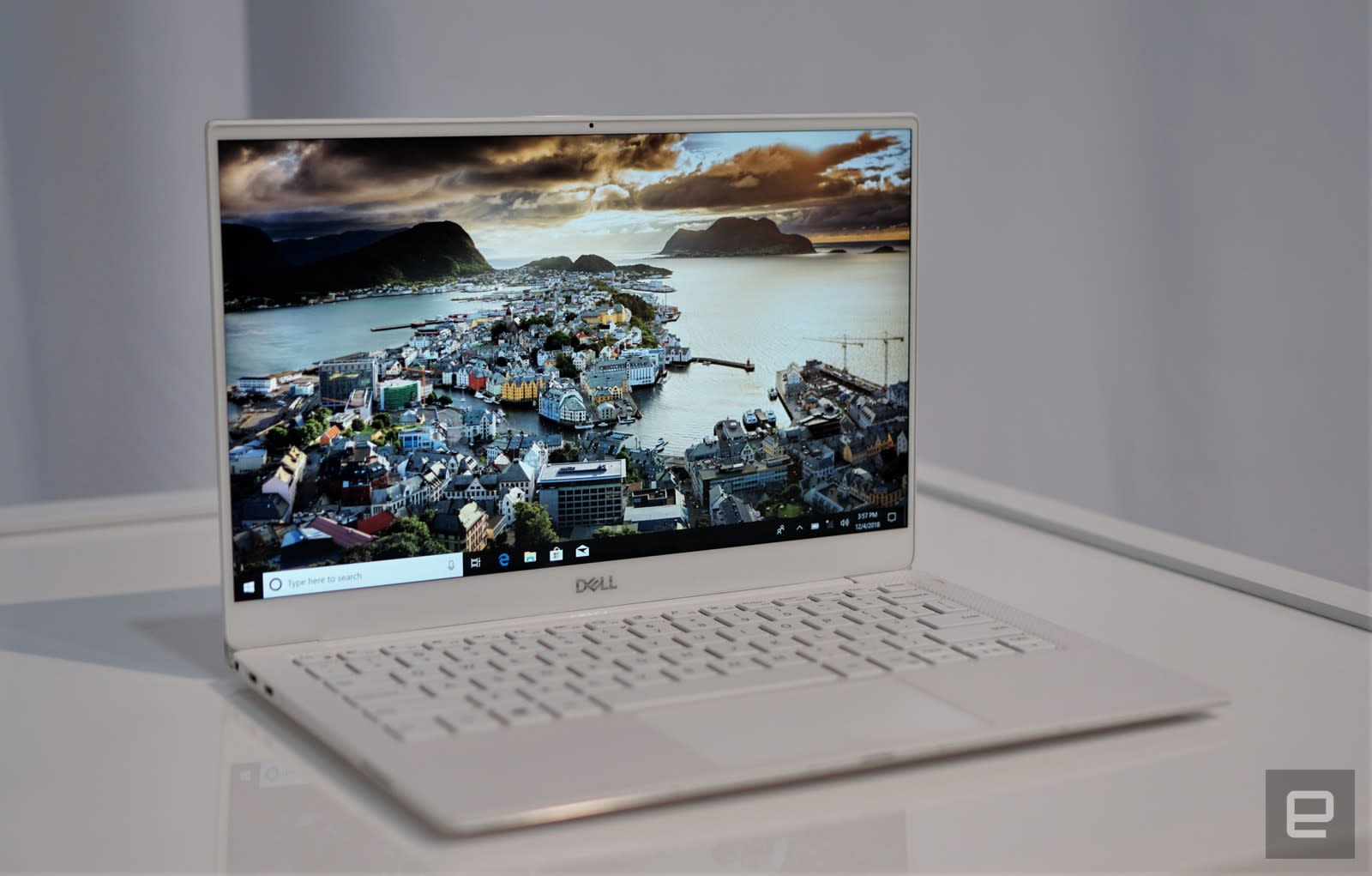 The ZenBook S13 we reviewed will sell for $1,399 -- unfortunately, ASUS hasn't divulged pricing for any other configurations. It's easy to tell what it's competing against: Just about every single ultraportable out there, including our favorites, the Dell XPS 13 (starting at $900) and the Surface Laptop ($1,000 and up). In those cases, the S13 has the advantage of NVIDIA's MX150. When compared to the few laptops with that GPU, it's also far lighter.

If you're in the market for an ultraportable this year, you're going to have some difficult choices to make. From what we've seen, the new XPS 13 looks like it'll be yet another solid entry in the series, especially with the addition of Dolby Vision HDR. But Overwatch will still run like garbage on it. 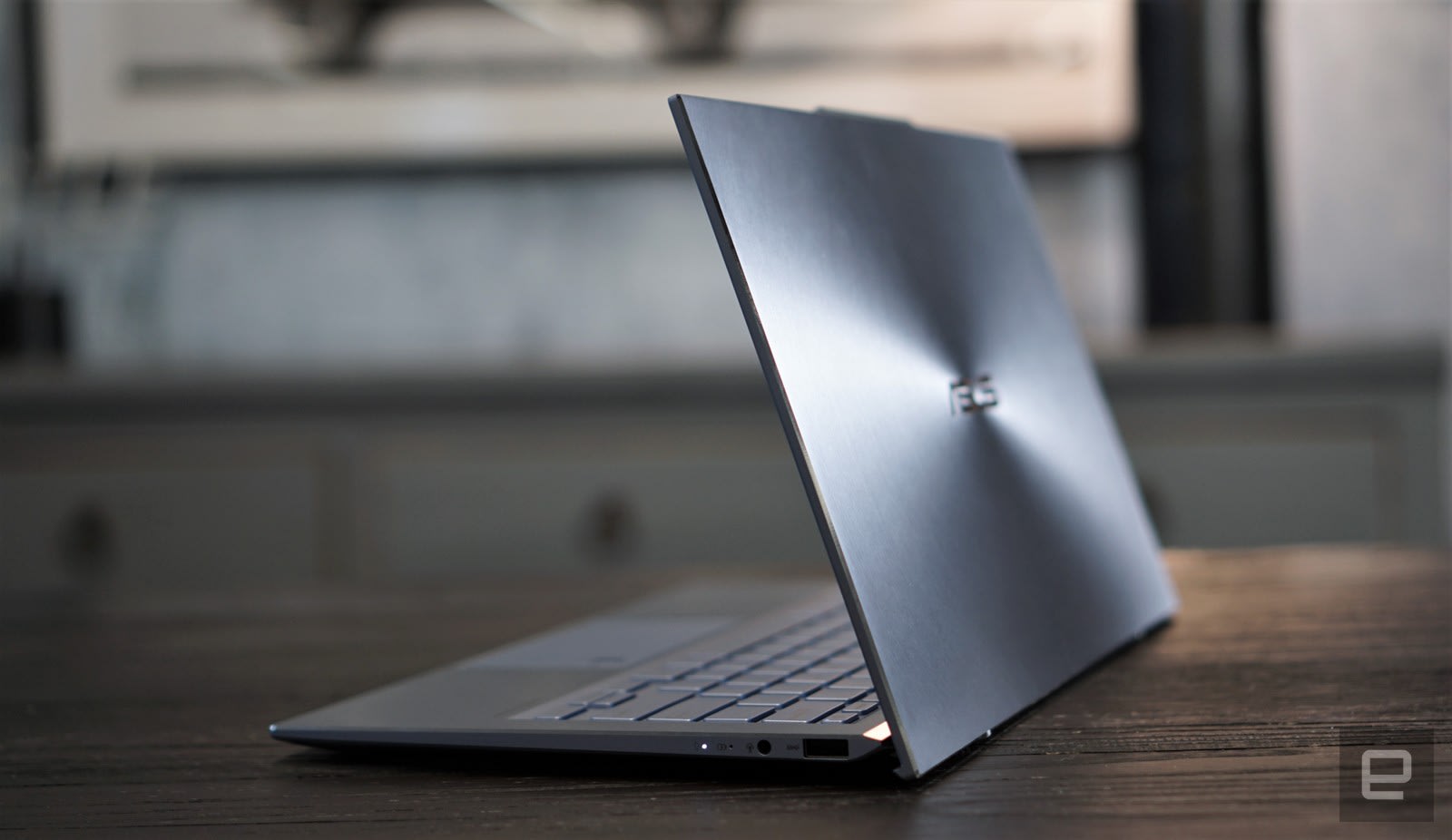 While the Zenbook S13 might seem like just another ultraportable on the surface, its dedicated graphics and glorious thin bezel screen help it stand out. ASUS is known for experimenting with new designs in its laptops, like with last year's ZenBook Pro, which tucked a screen inside its trackpad.

It's not always clear if those design risks will pay off, but in this case, it feels like ASUS is genuinely pushing the industry forward a bit. The ZenBook S13 won't be the only ultraportable with decent graphics this year. But ASUS deserves a lot of credit for getting there before everyone else.