What we don't know is how much it will all cost.

On stage at today's "show time" event, Apple CEO Tim Cook announced Apple TV+, an ad-free subscription home for the company's new push into original content. With the Apple TV app now extending onto other smart TV platforms while collecting shows and movies from other outlets into Channels, it's giving people even more of a reason to stick with Apple by adding exclusives you can't get anywhere else. According to senior VP Eddy Cue, "Apple TV+ will be home to some of the highest quality original storytelling that TV and movie lovers have seen yet."

We've heard a lot about its content buying spree over the last year or so, but on stage, execs kicked things off with a video featuring big names like Steven Spielberg, Ron Howard and Octavia Spencer. Spielberg himself appeared on stage first to talk about Apple TV+ and the stories he wants to tell.

Reese Witherspoon and Jennifer Aniston showed up to talk about their new project The Morning Show, along with co-star Steve Carell, before Alfre Woodard and Jason Momoa hit the stage to talk about See, a new sci-fi series coming to the service. Kumail Nanjiani was up next, discussing his experiences as an immigrant that will be a part of the series he's writing with his wife for Apple, Little America. 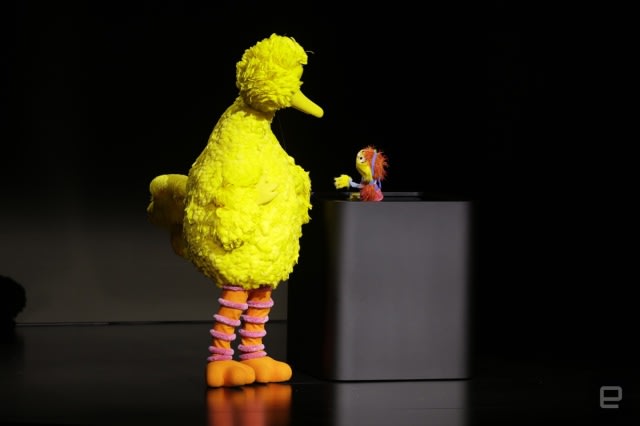 Still, the biggest star in the run is Big Bird, with Sesame Workshop programming coming to Apple TV+ as well. The show is called Helpsters, featuring another Muppet who popped up on stage. Sara Bareilles and JJ Abrams were the last to appear, with Sara dropping in a musical number to mark the end of the celebrity parade before we finally saw a trailer featuring clips from all of Apple's new shows.

At the (not quite) absolute end, we finally got a few bullet points: Apple TV+ is a subscription service with no commercials that will launch in over 100 countries this fall, full of original content from many big names in entertainment. Whenever it launches, all of the new TVs with support for AirPlay will be able to stream its videos, and once they have the Apple TV app it will be home to this service, the new Channels and all of your purchased videos from iTunes. What we don't know yet is how much it will cost, and in a press release, Apple said that info will come in the fall.

Oh wait -- one more thing: Oprah. As expected, she will "join forces" with Apple to "serve this moment."

All products recommended by Engadget are selected by our editorial team, independent of our parent company. Some of our stories include affiliate links. If you buy something through one of these links, we may earn an affiliate commission. All prices are correct at the time of publishing.
Apple TV+ subscribers can expect ad-free original shows and movies this fall
apple
Apple TV
Apple TV Plus
applemarch2019
av
entertainment
gear
premium
streaming
subscription