The hook design isn’t for everyone, but the features are hard to pass up.

Despite being a hugely popular headphone brand, Beats has had one glaring hole in its wireless headphone lineup: true wireless earbuds. Thanks to a hint in iOS code, the Powerbeats Pro weren't exactly a well-kept secret, and as expected, they carry the latest Apple tech that's also found inside version 2.0 of the AirPods. At $249.95, the Powerbeats Pro is near the top end of the true wireless spectrum price-wise, and its over-the-ear hook design isn't for everyone. However, the combination of features and sound quality makes quite the impression. 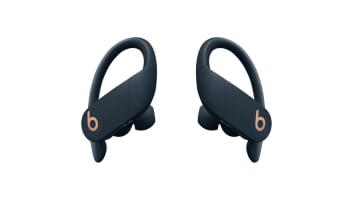 The first thing that strikes you about the Powerbeats Pro is the size. When you pull the charging case out of the box, you know immediately you're dealing with a much larger product than your average wireless earbuds. In fact, the case is about twice the size of those from the likes of B&O, Jabra and Sennheiser. It's huge. Of course, that's primarily because the buds themselves are much larger than most true wireless earbuds. They also sit angled in the case instead of laying flat. And they're very similar to the wireless, but still tethered, Powerbeats 3 that debuted in 2016. That said, the case lacks the refinement you'd expect from an Apple-owned company.

Besides being chunky, the charging case has a few other annoyances. First, there's no wireless charging, a feature that Apple offers with its latest AirPods. Wireless-charging cases aren't standard for true wireless earbuds yet, but we'll get there. And since Apple is there already, as are B&O and Samsung, it's disappointing Beats didn't do the same. Second, the case uses a Lightning cable to top off. Sigh. Even Apple is moving to USB-C to charge its devices. The iPad Pro is already there, and it's likely to make the change on other products soon. And if you're using an Android device, you're probably already carrying a USB-C cable for your phone. Well, if you want to use the Powerbeats Pro, you'll have to keep up with a second cable just for your headphones. 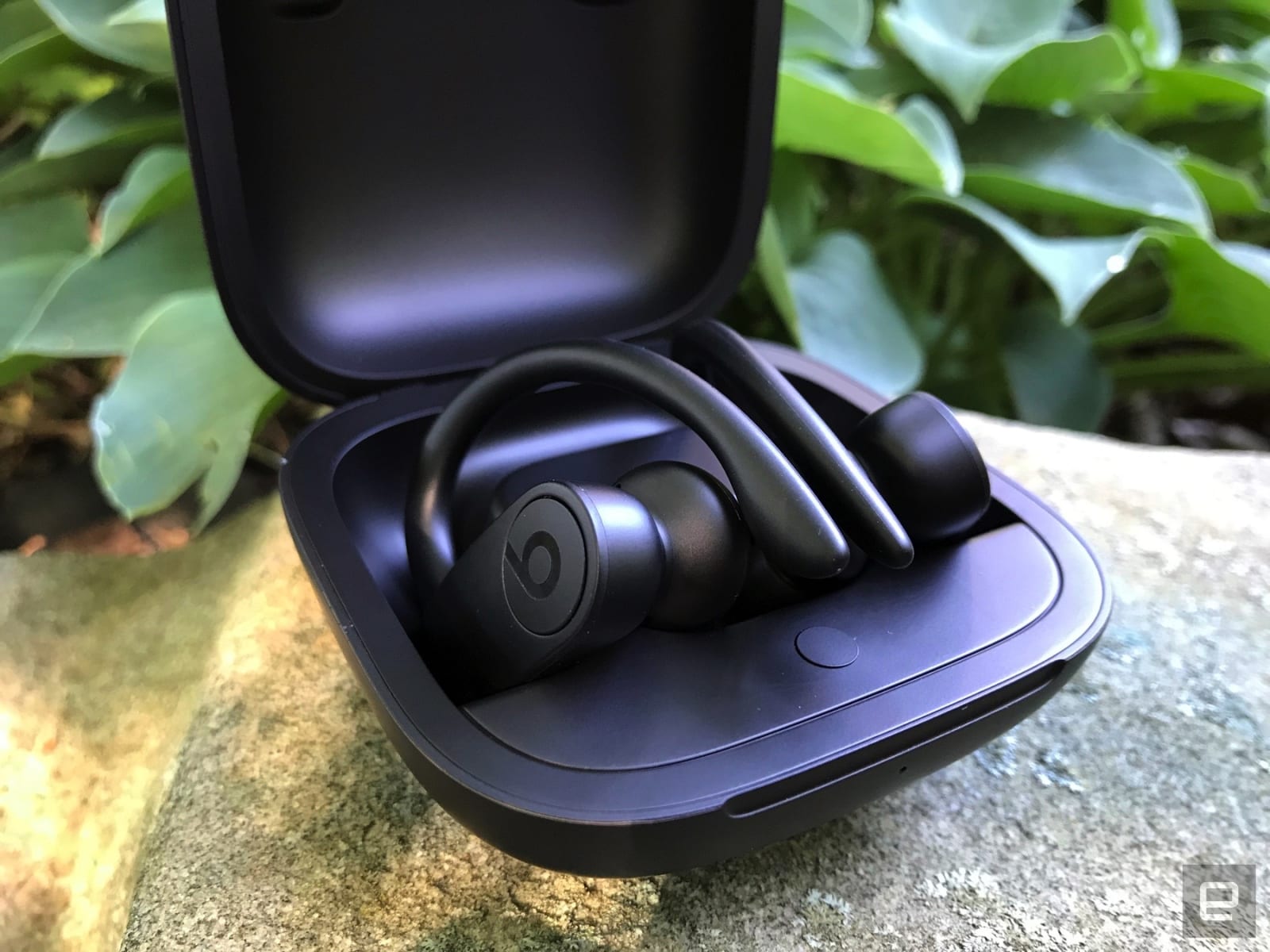 Beats decided to keep the over-the-ear hook design it debuted in 2010, primarily to keep the Powerbeats Pro in place during workouts and other physical activity. Most true wireless earbuds stay in place just fine when I'm at the gym, but they primarily rely on a snug fit or extra fins to do so. The Powerbeats' hook itself has been redesigned for a more secure fit, and the main part of the buds that houses the internals and battery is now angled instead of sitting straight across the outside of your ear. That last bit may sound like a subtle change, but it looks so much better. This section also houses an optical sensor that handles automatic pausing when you remove the buds from your ears and motion-detecting accelerometers that put the buds in sleep mode when they're idle. Beats also tweaked the included earbud tips to make things more comfortable and provide a better seal. The overall size is slightly smaller and lighter -- ultimately more comfortable -- than the Powerbeats 3, but again, there's no mistaking the two for siblings.

That hook isn't for everyone, though, especially if you want to wear them with a hat or glasses. I almost always wear a hat to the gym or on a run, and it pressed down on the hook, making the whole thing pretty uncomfortable. The hook also isn't the most subtle look when you're not working out. Other true wireless earbuds, like the Jabra Elite 65t or even the Galaxy Buds, tuck nicely in your ear. It's much harder to be casual about earbuds that not only stick out of your ear but also wrap around the front and top. Basically, the Powerbeats Pro may not be the best look for the office.

Since they're meant to be used at the gym, the Powerbeats Pro earbuds have to withstand exposure to moisture. Indeed, the true wireless earbuds are sweat and water resistant, or more specifically IPX4 rated. That means they can handle a splash of water without being damaged. Splashing water isn't typically a threat at most gyms, so no matter how sweaty you get during a workout, you shouldn't have to worry about moisture-related problems. The same goes for getting caught in the rain during a run.

As was the case with the Powerbeats 3, a real selling point on the Powerbeats Pro is Apple's headphone chip. The H1 chip debuted on Apple's latest AirPods, so it was only a matter of time before Beats got its hands on the tech. The H1 chip enables super fast pairing, even the first time you do so with an iOS device. It's noticeably faster than its predecessor, the W1. At its longest it took about two seconds from the time I opened the case until the pop-up appeared on my iPhone. It's almost instant. Once connected, that notification window displays battery levels for both the buds themselves and the charging case. 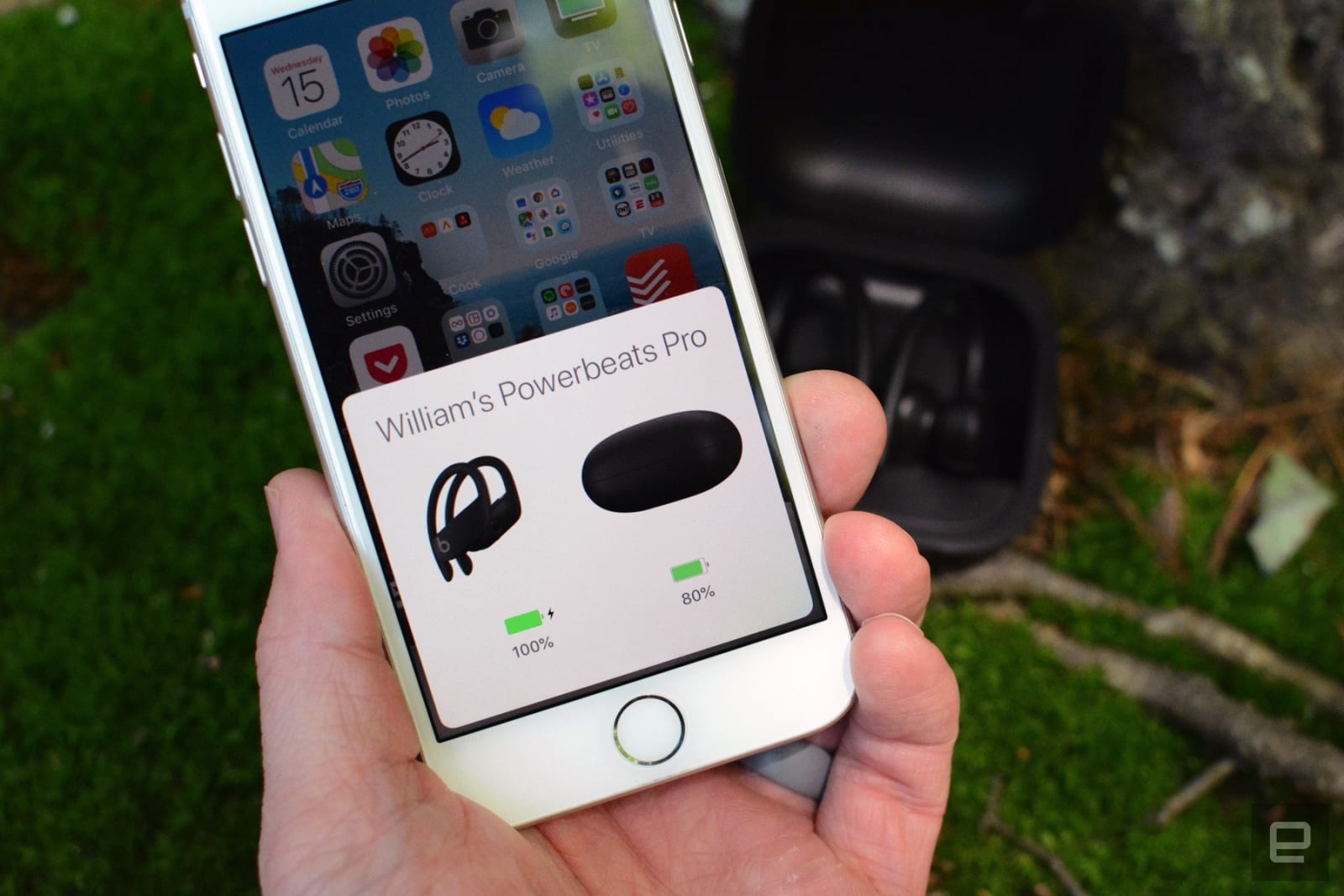 Once connected, the Powerbeats Pro is stable and reliable. Not once did I experience any dropouts or lag when watching video. Both of those can still be issues for true wireless earbuds. The range is also impressive. With most true wireless models I test, I can move around my house fine, but in the extreme corners, I'll experience some dropouts. That's not the case here. In fact, I was even able to step out on my back porch with the Powerbeats Pro and the music only skipped a couple times.

The main attraction for the H1 chip is the always-on access to Siri. Like on the AirPods, this means you don't have to press a button to summon the virtual assistant -- it's always listening. H1 also enables a faster setup on iOS devices, faster connection times for switching between iOS gear and an overall more reliable connection. The H1 chip also gives the Powerbeats Pro a feature Android users will appreciate. Some pairs of true wireless earbuds mandate that the right bud is the dominant one, so if you want to only have one in your ear, say, for a call, you have to use that one. Beats is giving you more freedom to choose. Instead of prioritizing one earbud, H1 optimizes the connection no matter which one you use. So in theory, you could use Powerbeats Pro continuously, because you could always be charging one of the earbuds.

That freedom extends to the onboard controls. Rather than putting some controls on one side and the rest on the other, Beats installed the full controls on both sides. It's not only great for lefties but also means that you're not missing out on key functions when you want to wear just one earbud. I found myself enjoying being able to use whichever hand was available rather than having to free a specific hand to adjust volume or change tracks. A volume rocker is situated on the top edge of each, and the iconic "b" logo doubles as the singular control for switching tracks and taking calls with a single, double or triple tap. There's also the ability to manually summon a voice assistant with a long press. You know, if you're not keen on Siri. Having all of this in one spot, and on one button, makes the controls super easy to use. And functions that require multiple clicks are reliable and didn't frustrate me like they have on other true wireless devices.

When it comes to audio quality, I'm not going to mince words: These are the best-sounding Beats headphones yet. There is one caveat, but overall, the company has done well with the tuning on the Powerbeats Pro. The Studio 3 Wireless has noticeably less bass than most previous models, and the same is true here. There's still plenty of low end to help keep your energy up at the gym, which is exactly what you should expect from earbuds designed for physical activity. However, it's never overpowering to the point of drowning out the mids or highs. In fact, I'd argue there's too much treble -- which is something I never thought I'd say about a pair of Beats.

The heavy-handed, high-end tone is most noticeable when they are cranked near full blast. If you're like me and have no regard for your hearing (I ruined it years ago anyway), this is how you like to listen to music. Especially when you're at the gym, either trying to get in the zone or trying to drown out the Maroon 5 or Ariana Grande blasting over the speakers. Some genres suffer from this treble issue more than others, and I found it more noticeable when I listened to the likes of Maren Morris, Thrice and Anderson Paak. Hi-hats, snare drums and some guitar licks quickly become uncomfortable noise instead of contributing to the song. It's an odd thing, because there's still plenty of bass underneath -- it's just that the treble is turned up way high too. The clarity is nice here, but it's not quite as crisp as what Sennheiser offers on the Momentum True Wireless. 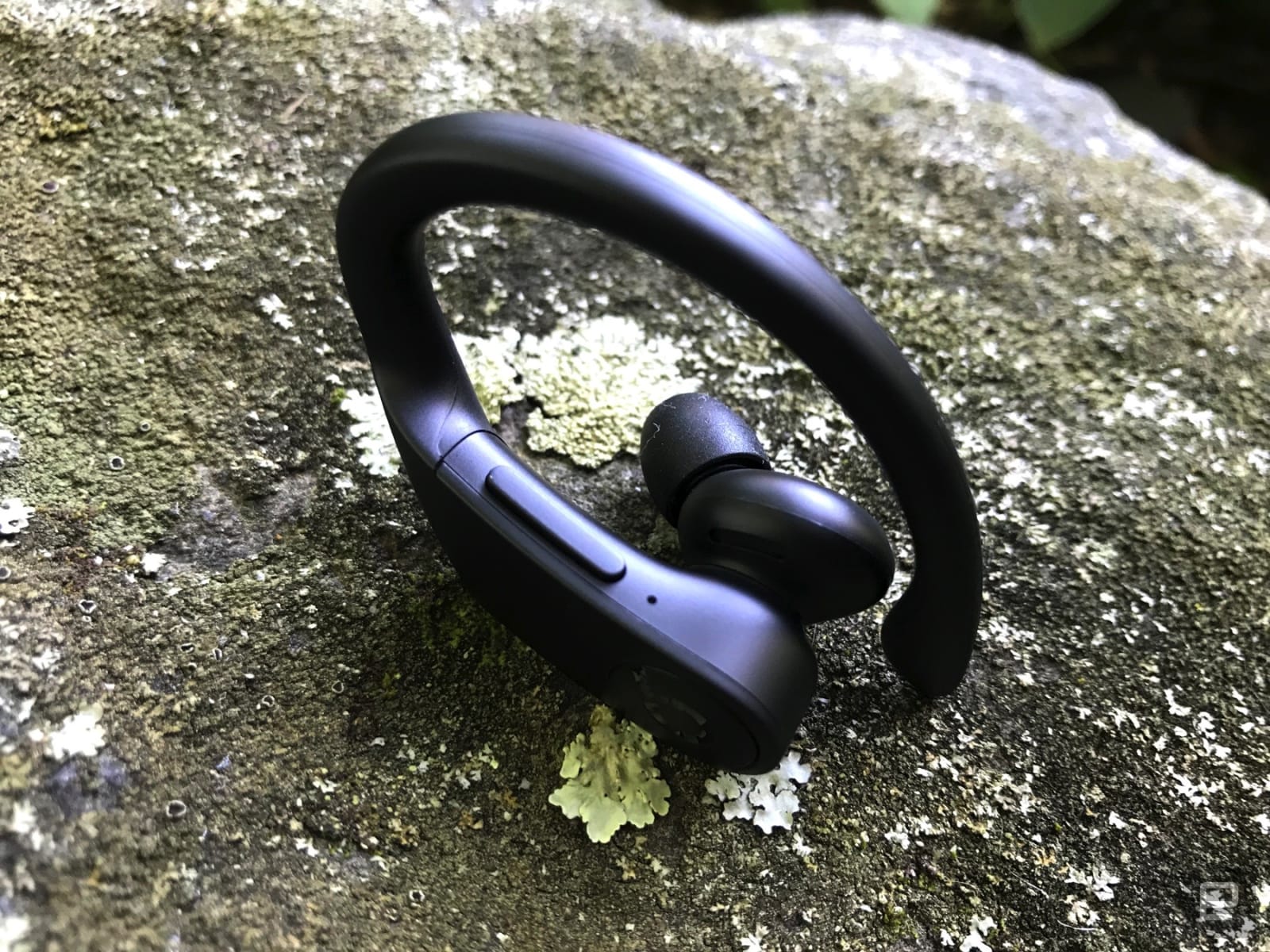 Not all genres suffer from this though. The Powerbeats Pro (like every other pair of Beats) handles most hip-hop, pounding electronic tunes and chugging metal with ease. Gojira's Magma sounds great on these, for example, but it's booming and bass heavy -- even the grinding guitars. Ditto for Every Time I Die's Low Teens. It's when you're listening to styles that rely on treble to complete the sound that you run into issues. But again, it's the worst at or near full volume. Turn the level down a couple clicks and it's not nearly as bad.

Beats claims nine hours of battery life on a charge for the Powerbeats Pro, which is much longer than most of the competition. Other models typically offer around five hours of listening at a time. I never found myself getting close to a low battery in one go, and I'd imagine you won't either. Even if you wear them all day at work, you're likely going to put them in the case during a lunch break or meeting or some other interaction with humans. And with 24 total hours of playtime, according to Beats, that handy (albeit bulky AF) charging case almost entirely eliminates any battery anxiety. Especially when you factor in the Fast Fuel feature that gives you 1.5 hours of use with a five-minute charge or 4.5 hours of listening with a 15-minute charge. The earbuds will fully charge in 90 minutes while the whole shebang (charging case and all) is topped off after 2.5 hours. Despite my best efforts, I couldn't drain the Powerbeats Pro entirely during normal use, and that's a good thing. 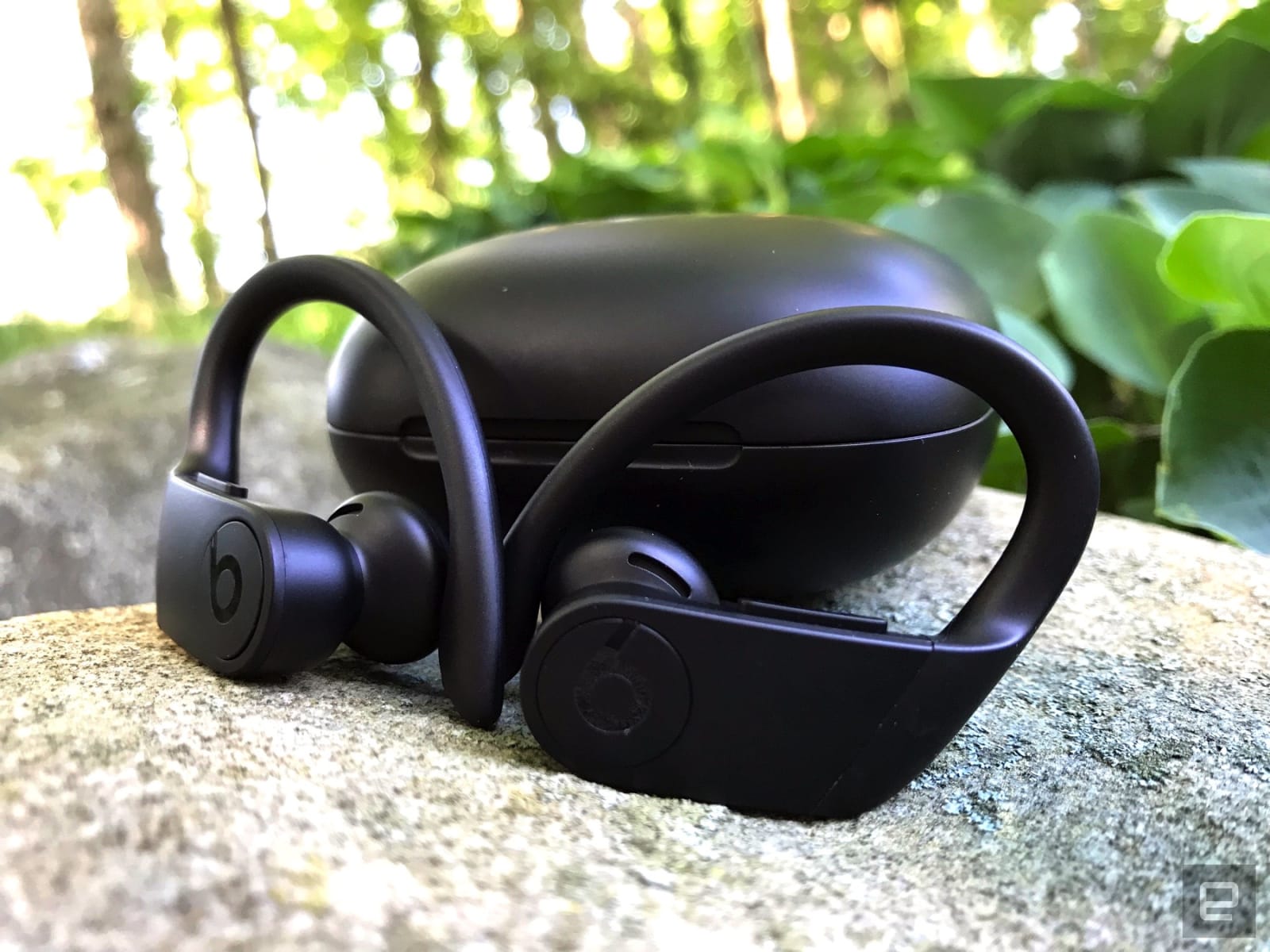 At $250, there are more-affordable true wireless options out there. Jabra's Elite 65t is still my favorite overall, and the pricey Sennheiser Momentum True Wireless and Master & Dynamic MW07 offer better overall audio quality. However, the Powerbeats Pro's reliability, features and great overall audio make it a solid choice for anyone looking for workout headphones that can double as your everyday set. They work well even on Android devices, despite some features being iOS-specific.

The Powerbeats Pro isn't without its flaws, but overall, this is the best set of headphones or earbuds Beats has put out thus far, especially in terms of audio quality. The company took awhile to enter the true wireless space, and thanks to Apple's tech, it got almost everything right. If you're looking for headphones you can put through the ringer at the gym, you'll have a tough time finding an alternative that checks as many boxes at the Powerbeats Pro, especially if you're an iOS user.