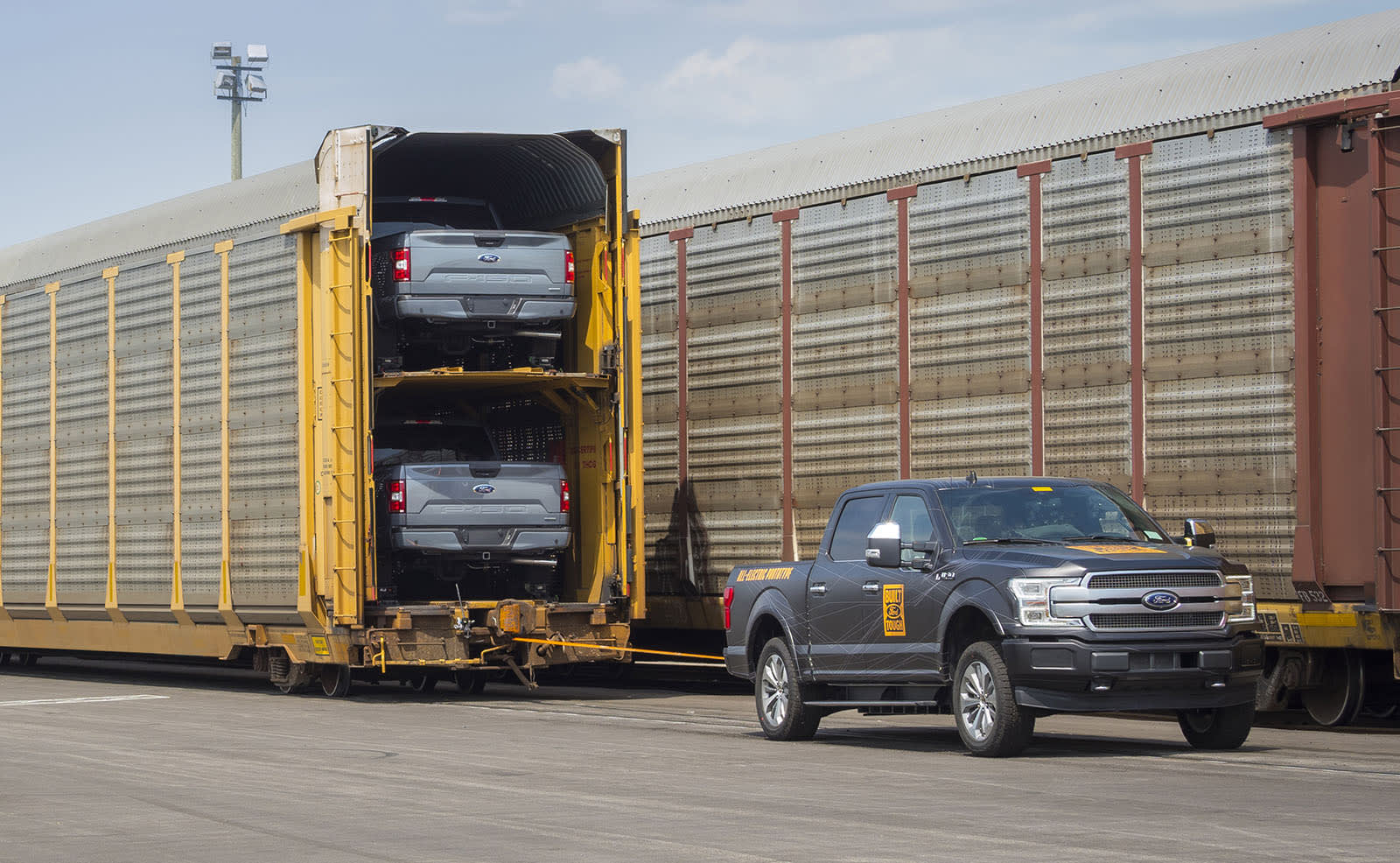 Ford is trying to show its rabid pickup truck fans that EVs aren't just for latte-sipping Tesla pilots. In an impressive demonstration of torque, an electric F-150 prototype towed 10 double-decker rail cars stuffed with 42 current-model F-150s, weighing over a million pounds (500 tons) in total. That shows promise that it could beat Ford's current towing champ, the 2019 F-150 with a 3.5L twin-turbocharged V6, that's rated to tow 13,200 pounds (6.6 tons).

It's just a technology demo and of course there's a big difference between rated and maximum towing capacity. It does show, though, how electric motors can develop more torque than ICE engines, even at zero RPMs. There's a reason, after all, that most train locomotives are diesel electric, with the diesel engine acting as a generator and the electric motor actually driving the train.

Left unsaid in all this, of course, is that while an electric F-150 might be able to pull more weight than a gas-powered model, it wouldn't be able to do so for nearly as long. The ICE model has a (non-towing) range of 720 miles with the optional 36-gallon tanks, while the longest-range EV out there, the Tesla Model S 100D, can go 370 miles. Ford has yet to reveal the battery capacity of the electric F-150, nor when it will hit the market.

When the F-150 EV does arrive, it will have to contend with Tesla, which is set to launch its own "cyberpunk" EV pickup pretty soon. CEO Elon Musk has also bragged about towing capacity, tweeting that Tesla's model will be able to tow 300,000 pounds.

An electric F-150 will also be competing with Rivian, which recently unveiled the impressive looking R1T electric truck. However, that should be a more friendly rivalry, as Ford has invested $500 million into the startup. The automaker plans to build an "all-new" electric vehicle using Rivian's platform, on top of the F-150 and its other EV projects. Ford also recently announced that it was collaborating with Volkswagen, and will use VW's MEB platform for its own electric cars.

Update 7/23/2019 at 4:30 PM ET: The article originally stated that Tesla's Model S 100D has a range of 335 miles, but with the latest "Raven" drivetrain update, it can actually go 370 miles. The post has been updated with the correct information (thanks, Michael).

In this article: ElectricF-150, ElectricTruck, EV, F-150, Ford, gear, pickup, torque, towing, transportation, video
All products recommended by Engadget are selected by our editorial team, independent of our parent company. Some of our stories include affiliate links. If you buy something through one of these links, we may earn an affiliate commission.