Then again, Henry Ford said the same thing in 1940.

"Mark my words. A combination of airplane and motorcar is coming. You may smile. But it will come," Henry Ford quipped in 1940. Our dreams of cars capable of taking flight at the whim of their driver have been around nearly as long as we've had cars themselves, or at least as long as we've endured heavy commute traffic. Yet the prospect of actual, commercially available flying automobiles has always seemed to remain just out of reach, only a few years from viability. But even as drones become commonplace, are we really any closer to an age of aeronautical automobiles than we were in Ford's day?

What even is a flying car? Designs have run the gamut from the AVE Mizar (basically a Ford Pinto with wings, to VTOL (vertical takeoff and landing) designs like the Piasecki VZ-8 Airgeep. Even today, you've got roadable aircraft like the Terrafugia Transition, though these are quickly being pushed into the periphery in favor of VTOLs like the Bell Nexus being developed for Uber Elevate. That is, modern designs generally focus on serving as personal aircraft, rather than automobiles that can also fly.

Sathish Muthukrishnan, Chief Digital and Information Officer at Honeywell Aerospace, points to advancements in computing as having enabled the recent bevy of development. "The ability to collect, store, process and compute data has improved over the last two decades," he told Engadget. "Everything is now connected so when you have the ability to collect data in a real-time basis, is almost pathbreaking to have these flying cars, because you're you have to be able to respond in real-time."

More than 70 companies are currently developing their own personal flying vehicles, with varying degrees of progress. The EHang 184 quadcopter, which made its debut at CES 2016, has already completed a number of test flights but has yet to receive FAA approval to operate in the US while Volocopter's 18-fan aerial vehicle is set to begin trials in Singapore later this year. Lilium recently released a new video of its 5-passenger electric air taxi, though the vehicle won't be ready until 2025. NEC's flying taxi project is just getting off the ground and it won't enter production until 2026.

No firm is putting more resources into getting its service off the ground than Uber. The ride hailing company is adamant that it will have a fleet of air taxis in operation by 2023, dubbed UberAir. Uber has already teamed with a number of aerospace companies including Boeing, Bell, Karem Aircraft, and Jaunt Air Mobility. 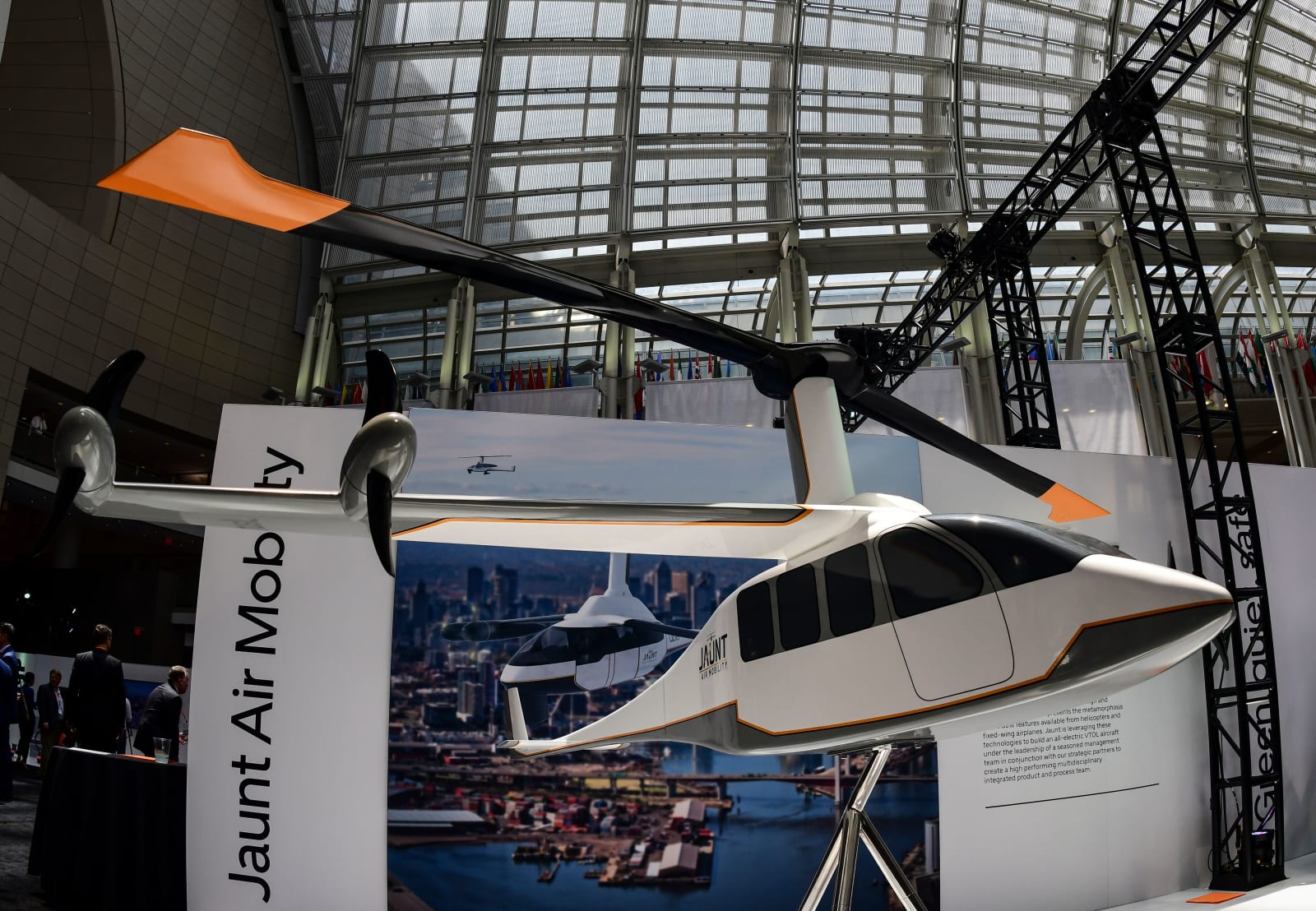 "I think we can't underplay how much of an impact Uber has had actually creating a platform and pushing it," Mike Stewart, Honeywell Aerospace VP of Engineering, told Engadget. "I think that's generated a lot of buzz."

The company debuted a prototype of its electric VTOL design from Bell at CES 2019 in January. These aircraft use four vertical fans for lift and a separate propeller for forward thrust. They'll be able to carry four passengers plus a pilot up to 60 miles on a single battery charge at speeds in excess of 150 MPH. These aircraft are likely to begin flight tests next year in the skies over Dallas, Los Angeles, and Melbourne.

Uber reps noted during the third Elevate Conference held in Tokyo last September that the vehicle's batteries will charge enough for short, in-city flights in just 8 minutes, enabling crews to top off the power in the time it takes for one group of passengers to disembark and another to load in at one of Uber's designated "Skyports," aka helipads. The company hopes to get that timing down to an even 5 minutes with future advances in battery chemistry. As for the price of a flight, Uber expects to charge around $6 per mile flown when the program first launches but hopes to get that figure down to around $2 a mile as the service scales.

But if the goal of establishing a viable commercial air taxi service in the next 4 years -- especially from a company that lost $5.24 billion just last quarter and whose ground-based autonomous navigation systems have already killed one person -- seems a bit ambitious, that's because you're correct. This industry is still in its infancy and faces a slew of technical, regulatory and infrastructure challenges.

Take automation for example. Conventional helicopters are relatively simple to control as the pilot has just two rotors to pay attention to. That difficulty multiplies once we start adding extra spinning bits. Quad-rotor designs like Bell's, much less the 18-rotor Volocoper, are simply too complex for one person to operate each fan individually and still be able to fly.

"A pilot can't be in control of 8 or 10 different rotors and expect to maintain any degree of situational awareness," Brian German, an associate professor at the Georgia Institute of Technology, told Wired 2018. "So when you push on the stick in this system, everything that happens to point the aircraft in the desired direction is automated."

AI still also lacks the common sense that passengers expect from pilots. "It's really hard for autonomous systems to understand different scenarios," German continued. "Maybe, for instance, you're flying an airplane and you see a forest fire out of the left window. A human pilot knows immediately that it's probably not a good idea to fly right over it. But how will an autonomous system know that?"

And that's just one pilot operating one aircraft. For fleets of these vehicles to operate safely over urban areas, significant changes to our existing air control system will be needed. Luckily, Uber is already working with NASA on just such a solution. "[AI are] going to be needed in the big history of this," Stewart argued. "Maybe not in the short term, but definitely in the long term, they will come into play."

Uber and its allies are also betting big on electric propulsion. "The current vision for these adopters is almost predominantly electrified, Stewart noted. "Very few of us are seeing hybrid electric now, dependent on the mission they have and the availability of infrastructure to get the electric charge necessary." However, we're still likely decades away from the necessary advancements in battery technology that will enable regional travel, much less transcontinental flights. "The range would have to get pretty big before these things become something that would affect an airline," Stewart said. "The airlines are moving masses of people a pretty big distance."

He does however believe that the sorts of VTOL aircraft that Uber has in mind could eventually prove a boon to smaller regional airports like those in Burbank, California or Deer Valley, Arizona. Stewart points out that for a time, turboprop passenger planes were seen as a viable regional flight option. But after 9/11, "it drifted away because the models for security and everything just didn't make sense," he said.

"I think as the vehicles and the battery technology and all that becomes better, we start to see that [business model] maybe come back," Stewart corollaried, "where you have a 20 passenger electric aircraft that only has to go 300 miles -- that starts to become a reality."

It'll be quite some time before we're hopping on VTOLs for our LA-Vegas jaunts. In the meantime, Muthukrishnan is confident that we'll find plenty of use for these aircraft in the congested hearts of urban centers. "Think about the number of people that go from downtown Manhattan to Midtown or Uptown," he said. "In the black cars, during peak hours, it takes anywhere from 60 to 90 minutes," at a cost of anywhere from $75 to $200. "If you had short vertical takeoff and landing, you could do that for $50 in less than 10 minutes."