And hey, you can play with Juventus, not "Piemonte Calcio."

It was only about a year ago that I thought Pro Evolution Soccer was basically dead. That's how I felt right after Konami lost the licensing rights for the UEFA Champions League, the most important club competition, to its archrival FIFA from EA Sports. Despite this major setback, Konami hasn't given up on its beloved franchise, and that's great for soccer fans everywhere. At E3 earlier this year, I played a demo of the newly named eFootball PES 2020, which surprised me thanks to gameplay improvements, a redesigned menu system that's easier to browse and better visuals of players and stadiums.

And while I have no doubt having the Champions League in PES 2020 would've made the game significantly better, there's still plenty to like in the full version of the title, which arrives September 10th for PlayStation 4, Xbox One and PC.

For starters, one of the things Konami worked on this year was to enhance passing, shooting and one-touch controls, which the developer says now takes into account more of the physics of the ball. This means when you're taking a shot or making a pass you have to be mindful of how your player is positioned, or how fast you're moving as you strike the ball. Defenders, meanwhile, are now smarter and have new ways to try to stop attacking players, including new slide tackle animations, quicker reaction times and the option to commit intentional fouls. 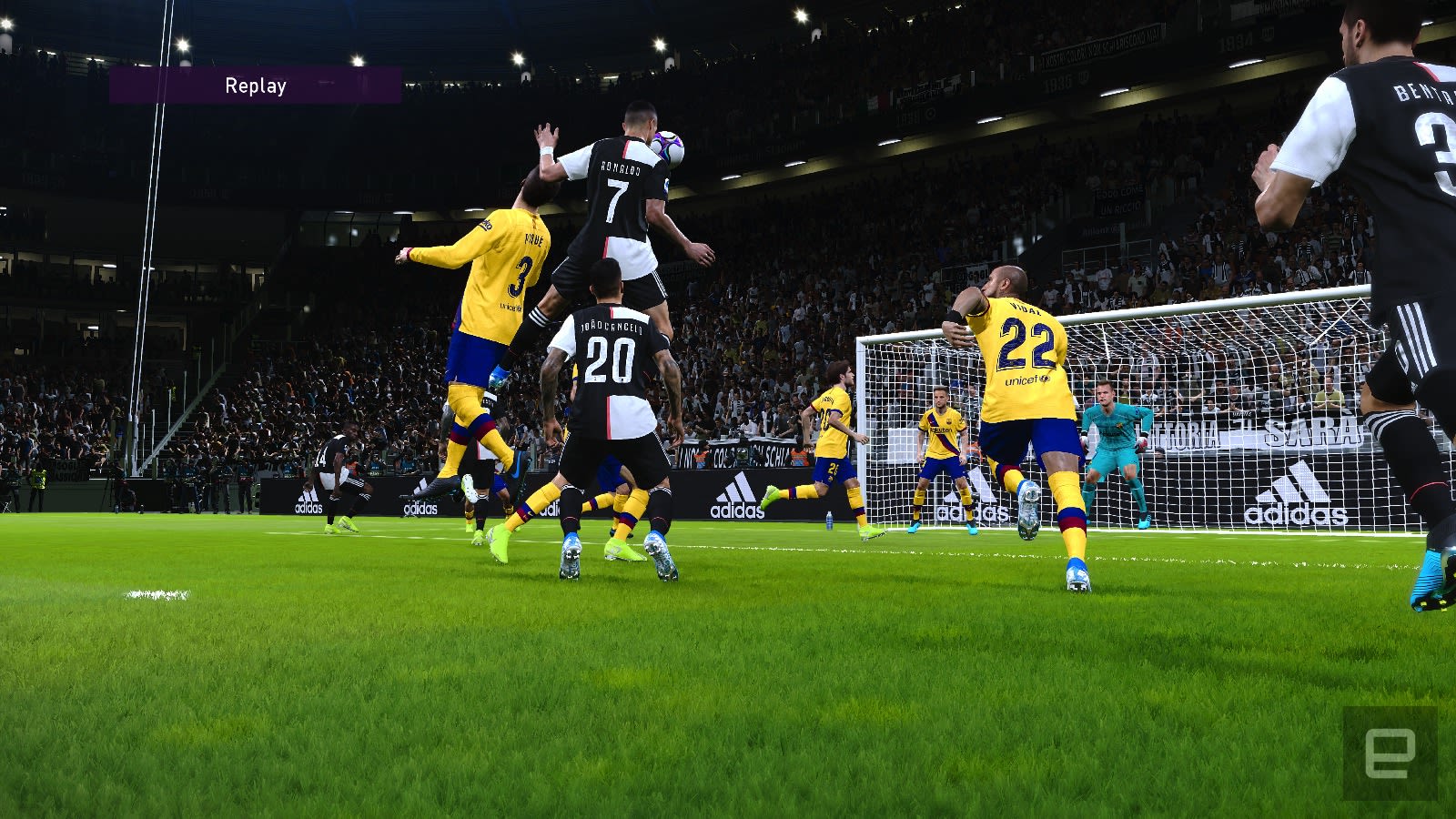 After playing a number of PES 2020 matches, I can tell you it's definitely harder to score compared to last year's game -- and that's good since you don't want every match to be 5- or 7-0, whether you're playing the AI or a friend. At the same time, as a defender, you'll have a harder time getting skillful players like Lionel Messi or Cristiano Ronaldo off the ball. Sure, you might make successful tackles here and there if you're playing with a strong defender, such as Liverpool's Virgil van Dijk, but for the most part, it's hard for Messi, Ronaldo and others elite players like them to lose possession. Just as in real life.

Speaking of Ronaldo, this year it will be surprising to not see him play with his actual team's branding in FIFA 20. That's because Juventus is going to be known as "Piemonte Calcio" in the EA Sports franchise, as a result of Konami striking an exclusive deal with Italy's biggest club. That may not make up for the fact PES 2020 still won't feature the Champions League -- nor the names, jerseys and stadiums of other big European teams like Real Madrid or Liverpool -- but it shows that some football clubs are willing to take a chance on Konami and shun FIFA. 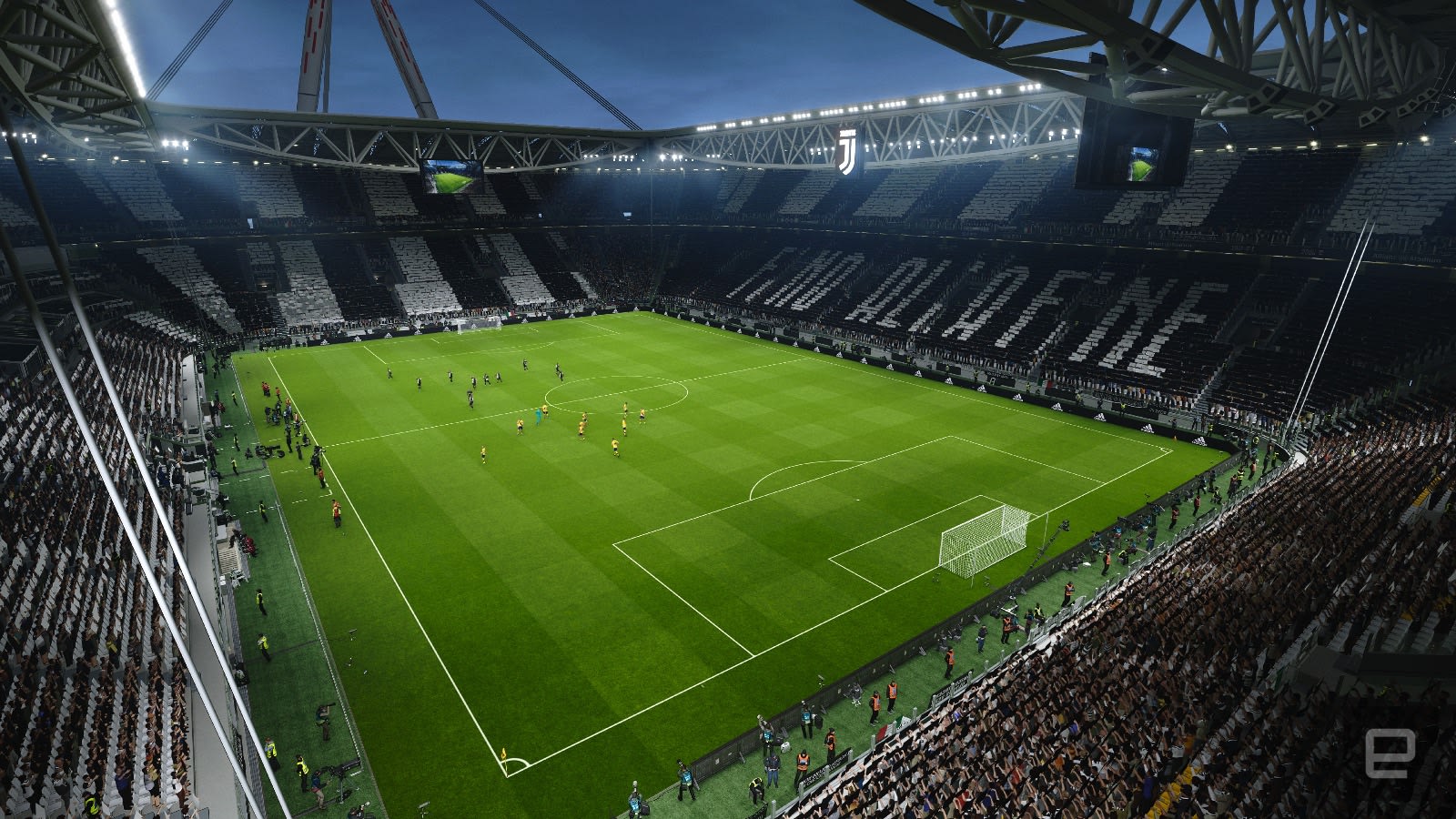 Along with Juventus, Konami has partnerships with FC Barcelona, Bayern Munich, Arsenal and Manchester United, which allow it to bring their full rosters, kits and stadiums to "PES 2020."

Another new feature in eFootball PES 2020 is "Matchday," a mode that lets players choose their favorite team and synchronize games to the schedule from professional leagues. This is similar to FIFA's Match Day Live, which is also designed to make the game feel more in-line with what's happening out in the real world. For instance, if Manchester United and Arsenal are playing each other one week and you play with either team and win, your points will be added to the total from PES 2020 online community, particularly those who are fans of the same club as you.

The goal with Matchday is for you to help your favorite team win as much as possible in PES 2020, so that it can be at the top of the standings and, of course, give you bragging rights over your friends.

"Edgarito" in "Become a Legend."

My favorite mode in PES 2020, though, is "Become a Legend." It's not new to this year's game, but it's still a perfect way to pass the time and enjoy playing with and against teams you wouldn't choose on a regular basis. Become a Legend, in case you haven't played it before, lets you create your own player and pretend to live the career of a footballer. The player I created isn't very good (yet), and the team I ended up on is one of Italy's worst (Cagliari), but that's why I like it: because it makes you have to keep playing to make him and your team better, since in the early years of your career you're far from being a star.

I do wish Become a Legend was as realistic and cinematic as FIFA's "The Journey" mode, since it would make it more fun to have a story that forces you to make every-day life decisions. That said, you do see Ronaldo make a cameo sporadically, even if you can't have your made-up player interact with him.

All in all, I have to give it to Konami for not giving up on Pro Evolution Soccer after the disappointment of losing the Champions League rights in 2018. The company could've easily let the game go in a downward spiral back then but, instead, it has kept working to make the game better for fans who have loved it despite its shortcomings over the years. eFootball PES 2020, isn't perfect by any means, but at the very least, it's a sign that the franchise is alive and well. Now we wait to see if FIFA 20 is really as great as it promising to be.

/15
All products recommended by Engadget are selected by our editorial team, independent of our parent company. Some of our stories include affiliate links. If you buy something through one of these links, we may earn an affiliate commission. All prices are correct at the time of publishing.
View All Comments
'PES 2020' isn't perfect, but it's good enough to rival 'FIFA 20'
av
champions league
cristiano ronaldo
ea
ea sports
efootball pes 2020
electronic arts
entertainment
football
futbol
gaming
gear
konami
lionel messi
pes
pes 2020
pro evolution soccer
pro evolution soccer 2020
soccer
sports
video games