I still remember it like it was yesterday. Back in 2008, I would spend hours and hours playing FIFA Street 3 on the Xbox 360, mostly because I loved being on the sticks pretending to be Brazilian superstar Ronaldinho. His dribbling skills, flair and overall playstyle made him the perfect player for a street soccer game. This is why I was pumped when EA Sports revealed it was bringing back its recreational Street series with a new game mode called Volta Football that's debuting in FIFA 20. And while Ronaldinho is now retired from the world of soccer, there is another gem from Brazil who will be featured in Volta: Vinicius Jr., the 19-year-old wunderkind who plays for giant Spanish club Real Madrid.

As nice as pro player cameos in the game are, the real star of Volta is the one you'll create and customize to your liking. This year's title is so dense that Volta Football could easily stand as its own game, but since EA made it a part of FIFA 20, that just means you have even more ways to spend time playing the game. Volta itself has three main modes: Volta Story, Volta World and Volta Tour. To play any of these, you'll first need to make your own avatar, male or female, who you can make look like the real you by tweaking all sort of physical attributes. Your player can have long or short hair, brown or blue eyes, blonde or black hair and wear shorts or joggers. 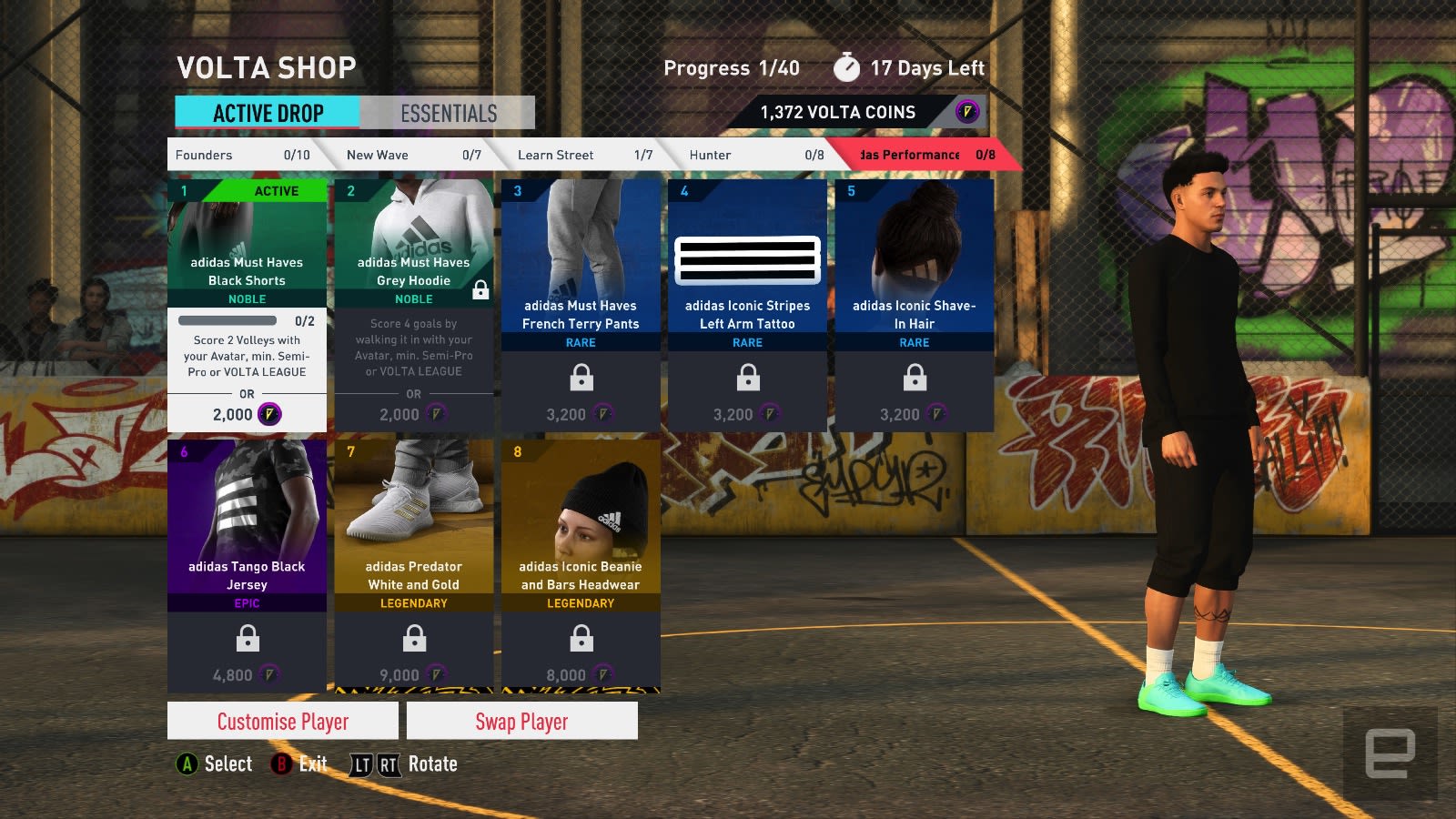 Once you get done with that vanity process -- I spent about an hour trying to make my player look super handsome and edgy -- you can get right into the action. Volta Story is essentially replacing The Journey, the story mode EA introduced in FIFA 17, so this is where you'll play a campaign full of cinematic shots and cameos from the likes of Vinicius Jr. This mode is particularly important in Volta because, although there are street pitches you can play in New York City, Amsterdam, London, Mexico City, Tokyo and other places around the world, you'll need to unlock them by playing through Volta Story.

What I liked the most about Volta's story mode is that, as you win any three-on-three, four-on-four or five-on-five tournament, you can recruit players from the teams you just beat. And you'll need them too, since competition only gets tougher as you try to win the world championships, which is your player's ultimate goal in Volta Story. Think of those street players you're recruiting as big bosses you're taking out and then joining forces with. It's a nice touch so that you don't always have the same teammates, and you can also customize the look of any player who joins your squad.

As you might expect, your Volta avatar isn't that good right after you create them, but you can help them get better by trying different skill challenges and playing different tournaments. Not only do you gain skill attributes by playing well and winning street matches, but you also get Volta points you can spend on clothes, accessories and shoes to make your player look more swaggy. Mine started out at level 65 (out of 100) and now I'm above 70, plus he's now wearing cool camo joggers and Adidas gear, which I was able to to buy after hours of playing.

Volta World and League, for their part, are an extension of Volta Story. League is where you can play Volta Football against friends and other people online, while World lets you explore the different street venues in the game and play matches there -- though you'll need to have unlocked the pitches in story mode before you can do play in some. Each location in this virtual tour has unique court with different match types, so you can play 3v3 (no goalkeepers), 4v4, 5v5 or even professional futsal (indoors) depending on which city you choose. It's great because playing in NYC, Mexico City, London or any of the other cities in Volta feels different.

I'll definitely miss The Journey, as I think it was one of the best features to come to the FIFA franchise in years, but Volta Football makes FIFA 20 feel fresh -- and I'm perfectly content with that. 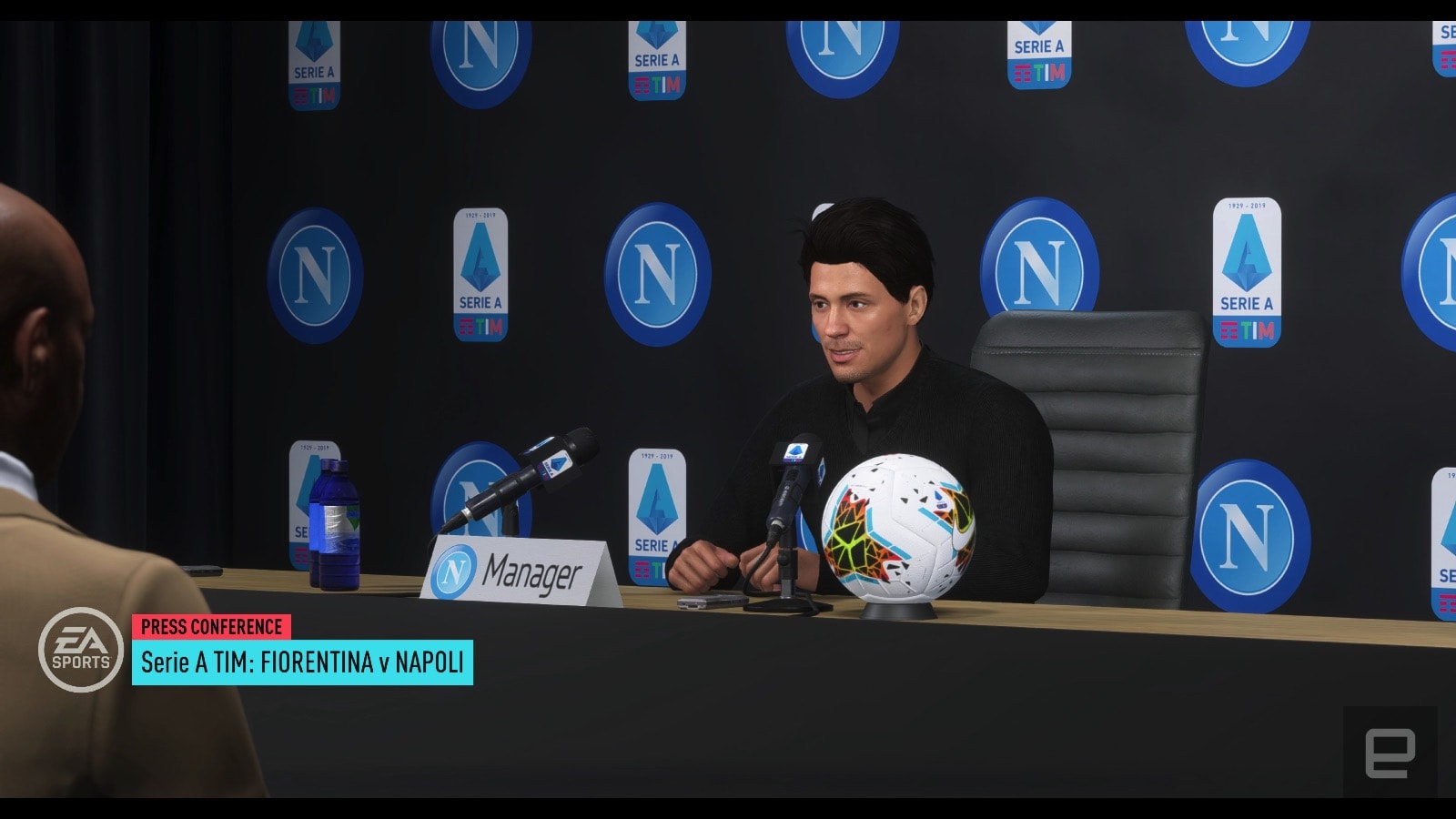 Although Volta Football is obviously the biggest addition to the latest edition of FIFA, EA Sports also made significant changes to Career Mode, which were long overdue. For starters, you'll have a chance to create and choose female characters as your manager, a first for the game. Unlike previous years, when you could only pick your manager from a group of standard, dull characters, in FIFA 20 you can customize their body type, skin tone, clothing and hairstyle. Additionally, EA took a cue from Football Manager and will now let your manager attend pre- and post-match press conferences, where your answers to questions from reporters will affect your team's and individual players' morale.

The changes extend to the classic gameplay, where EA has tried to make the game more realistic with tweaks that mimic real-world players and matches. With Composed Finishing and Controlled Tackling, for instance, shooting and defending is so much better that it won't take long for FIFA fans to notice. Composed Finishing makes scoring harder, especially in situations like volleys, and Controlled Tackling makes it so that when you play as a defender you have to time your tackles just right if you want to keep control of the ball.

EA says it wanted these new animations to make FIFA 20 feel like "true-to-life" experience, and it shows throughout the entire game.

When it comes to pure gameplay and graphics, it's hard to choose between eFootball PES 2020 and FIFA 20 -- both games look incredible and are equally as fun to play. But, it's features like Volta Football and the improved Career Mode that make FIFA 20 stand out yet again. Konami did beat EA Sports to some licensing rights this year, which is the reason Italian powerhouse Juventus is known as "Piemonte Calcio" in FIFA 20, though EA still has dibs on the UEFA Champions League and basically every other prestigious league and team.

FIFA 20 comes out on September 27th for PlayStation 4, Xbox One, PC and the Switch, though Volta Football won't be available on Nintendo's console. That's a shame, really, because it would be so fun to play the new mode during my daily commutes or while I'm on a plane trying to kill time. Who knows, maybe once Nintendo makes its Switch with a little more oomph EA will start to bring power-hungry features such as Volta to it -- one can only hope, at least.

/15
All products recommended by Engadget are selected by our editorial team, independent of our parent company. Some of our stories include affiliate links. If you buy something through one of these links, we may earn an affiliate commission. All prices are correct at the time of publishing.
View All Comments
Volta Football is exactly what 'FIFA 20' needs