It's a private space where you can share photos, videos and status.

If you want to get a glimpse of Mark Zuckerberg's "privacy-focused" vision for Facebook, then look no further than Instagram's new social app: Threads. This new standalone, camera-first messaging app is an extension of Instagram's Close Friends feature on Stories, which lets you share pictures, videos and more only with groups of people you've carefully selected. As the Facebook CEO has said in recent months, his plan is to take Facebook into an era of "simple, intimate places," where individuals can have a dedicated space for private interactions on its family of apps. And with Threads from Instagram, which launches today on iOS and Android, the company is taking a step in that direction.

So, how does it work, exactly? Well, as mentioned earlier, Threads is a completely new app -- although you will have access to Instagram's suite of creative tools, such as text, photo/video messages and, of course emoji. You can use the app similarly to Instagram, with the exception that photos, videos or text messages can only be sent to people you have as Close Friends, a feature that was introduced to Instagram Stories in 2018 as way to keep your intimate moments among BFFs. If you don't have a list of close friends setup on Instagram yet, don't worry, as you'll be able to create one directly in Threads once you have it on your iOS or Android device.

Like on Instagram, Threads will allow you to easily add or remove people to and from your close friends list, and there's no way for anyone to know if they're a part of yours -- unless you tell them. The fact that Threads is separate from Instagram means you can have a dedicated inbox for Close Friends messages and notifications, which is great if you don't want to deal with those random people who slide into your DMs when you post an Instagram Story. Threads will also open directly to the camera and let you create shortcuts for people on your Close Friends list, making it easy to share photos and videos with just a couple of taps. Yes, that's akin to what you can do on Snapchat, but at this point we know Instagram isn't afraid to take cues from its social rival. 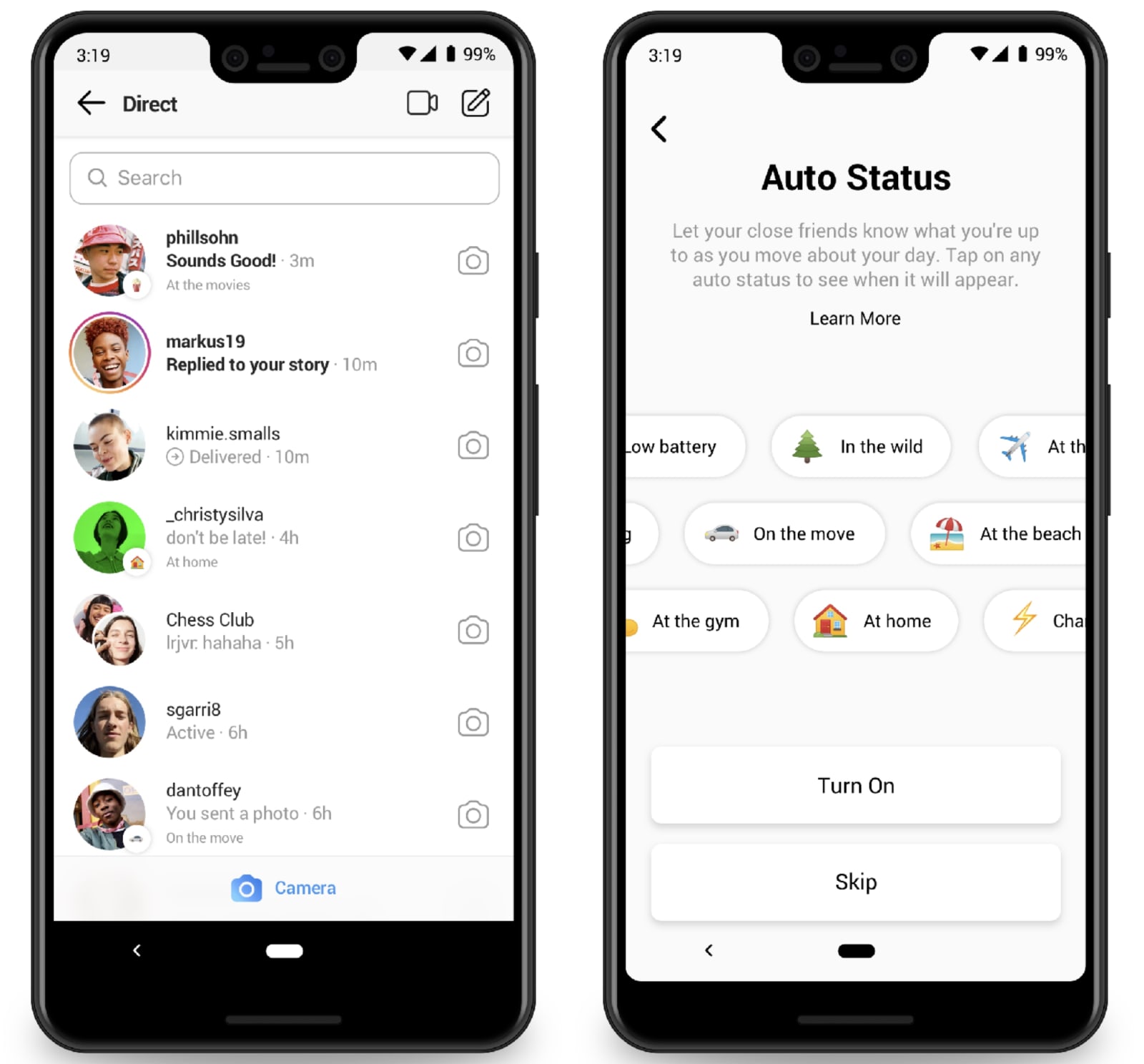 The most interesting feature of Threads, however, is shared statuses. Not only can you choose from a suggested status like "Studying " or "Procrastinating," which Instagram says can be used when you don't have time to send a photo or video, but then there's Auto Status. When enabled, this is going to allow Threads to request your smartphone's location, movement, battery level and network connection in order to share relevant context with your Close Friends. For instance, Auto Status could use your precise location to tell your friends you're "At a cafe," or it might detect you're on a bike and automatically set your status to "On the move."

Instagram did emphasize that Auto Status is completely opt-in, and you can turn it off whenever you want if you do decide to use it. Still, the Threads feature is likely to raise some concerns, given Facebook's well-documented data privacy woes.

While Threads is, indeed, a novel idea, it isn't the first time Instagram has worked on a standalone messaging app. The company experimented with the launch of Instagram Direct in 2017, an app that was designed to give Instagram users a more straightforward way to get private messages, but the company pulled the plug on that in May of 2019. That said, whenever you get DMs on Instagram Direct, they'll now show up in the main app as well as Threads. The main difference is that, with Threads, you'll know the messages hitting that inbox are from people you really care about.