It might have watered down its best features, however.
M. Smith|10.16.19
@thatmatsmith

It's a hard time to launch a smartphone. We're clinging onto our phones for longer and innovation has slowed to crawl -- irrespective of what companies are telling us. A lot of us either want the greatest, latest phone, or simply want a good deal. Oppo's Reno 2 is in the latter camp, attempting to steal away would-be Honor and middleweight Samsung phone shoppers. Why should you take a chance on the Reno 2? It might be its stylish, all-screen looks, or it might be the cameras. In this age of dual, tri- or quad-camera flagship phones, Oppo has tried to distill down the best features into a cheaper device, but it might have watered it down a little too much. Even if the sharkfin pop-up camera is still on board.

Before we get to all of the cameras, let's breeze through the other specifications. Normally, I'd say you don't usually see phones this stylish at this price, but mid-range phones have never looked better. Oppo has lifted the flagship looks of its Reno 10x Zoom, pretty much to a tee. It's slick, smooth and I like the faux blue 'glow' effect around the camera unit. It looks premium, and even the faux, forest green leather case that comes in the box is nice enough to use -- something that's often not true with free-with-the-phone cases. On the rear, there's a weird green nubbin. What I thought was a Sony Ericsson tribute (RIP) is actually a ceramic defense mechanism against scratching the camera units (which run flush to the phone) when you place the Reno 2 down. It's kinda dumb and smart at the same time. 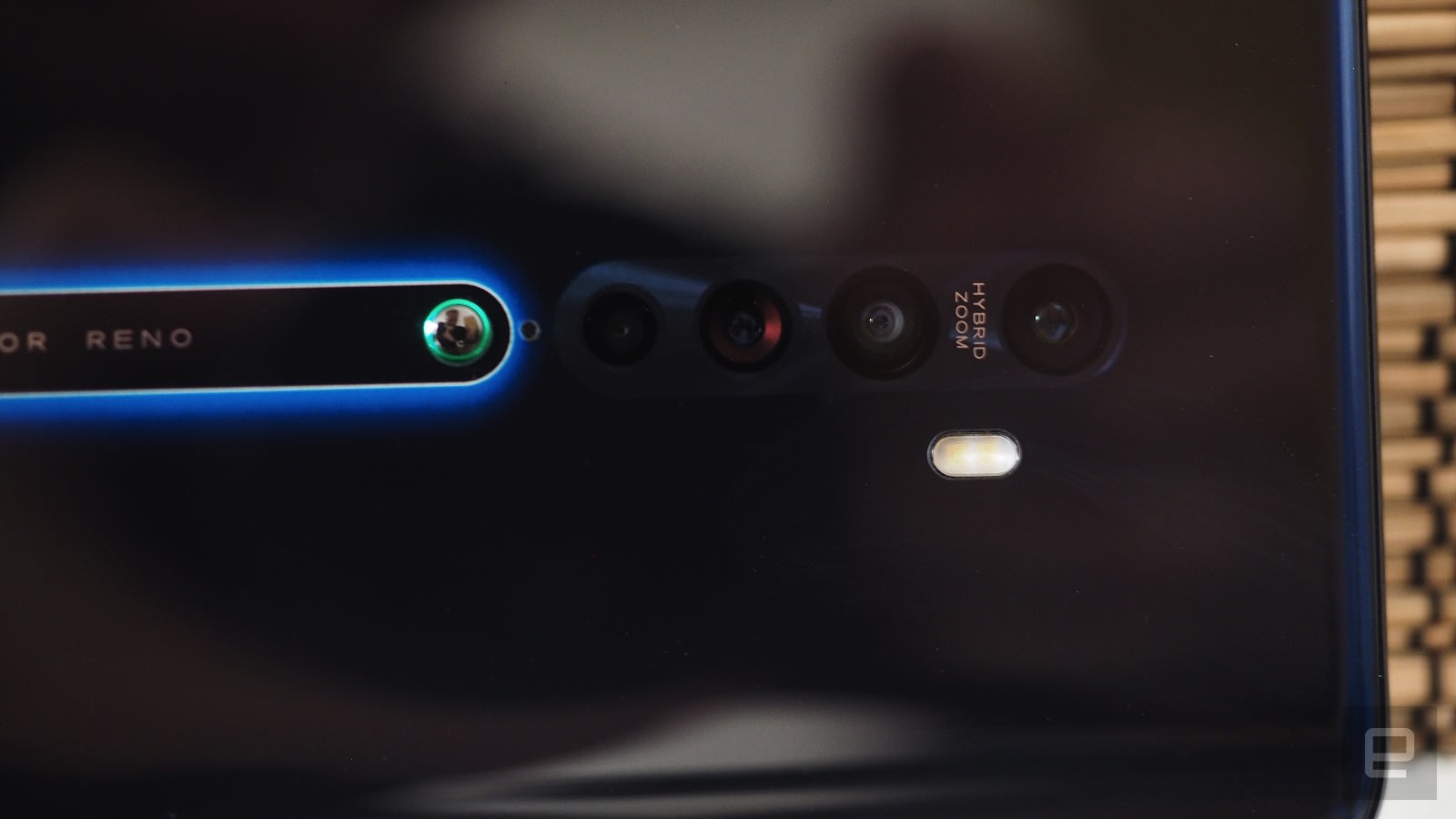 There is a mid-range Snapdragon 730G processor inside, and the Reno 2 is the first Oppo phone to benefit from neural network processing to speed up night-mode shooting -- a la the Pixel series and Huawei's P30 Pro. Which is where we circle back to the camera array.

The Reno 2 has a 48-megapixel f/1.7 primary camera, a 13-megapixel f/2.4 telephoto sensor, an 8-megapixel 116-degree ultra-wide camera and a 2-megapixel monochrome camera which mostly just helps out with depth and the portrait 'bokeh' effects.

The banner feature is versatility. You can take ultra-wide shots of landscapes or groups of people, you can take up-close macro images of flowers or other details, and alongside 2x optical zoom, the Reno 2 can deliver hybrid 5x zoom results that combine the high-megapixel primary shooter with the telephoto lens.

It's a jack of all trades but, judging from my week with it, master of none. Macro photos on fine details and close-ups are often washed out, forcing you to tweak exposure on every photo, which isn't great. The results aren't particularly wow, either. The ultra-wide lens gives nice results in cramped settings, like this pinball arcade. It still manages to pull in a lot of light and detail here. 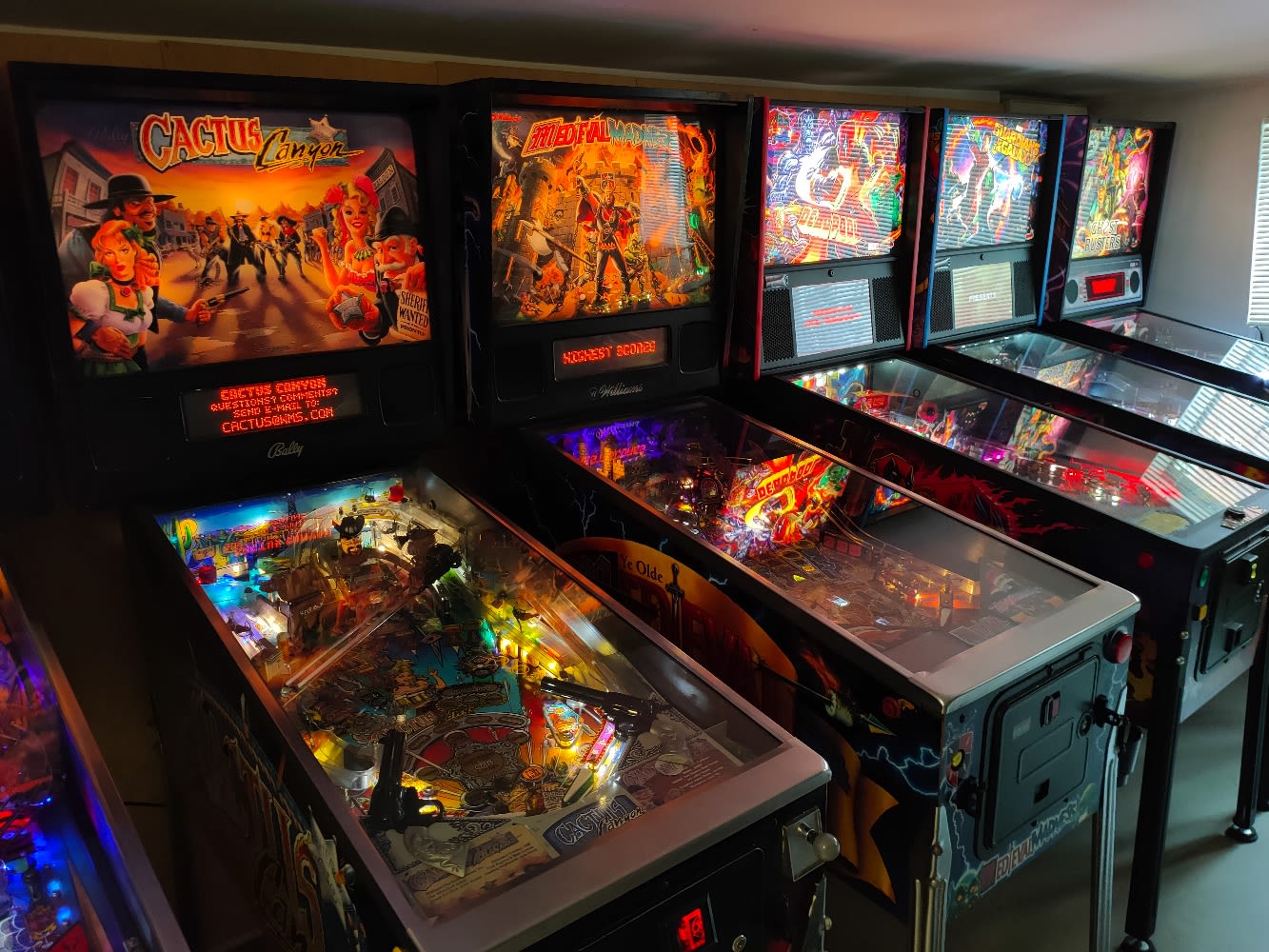 How about that zoom function? You won't get the impressive 10x zoom seen on the pricier, imaginatively titled Reno 10x Zoom, sadly. And you don't get a default 6x zoom either. Instead, there's a 2x optical zoom (par for the course now), and a 5x Hybrid zoom. Because it's hybrid, combining several camera sensors with some cropping and clever image processing, results can be mixed -- I've seen great and terrible applications of it. When it does work in perfect conditions, it's amazing. Sometimes it's fuzzy and pointless. 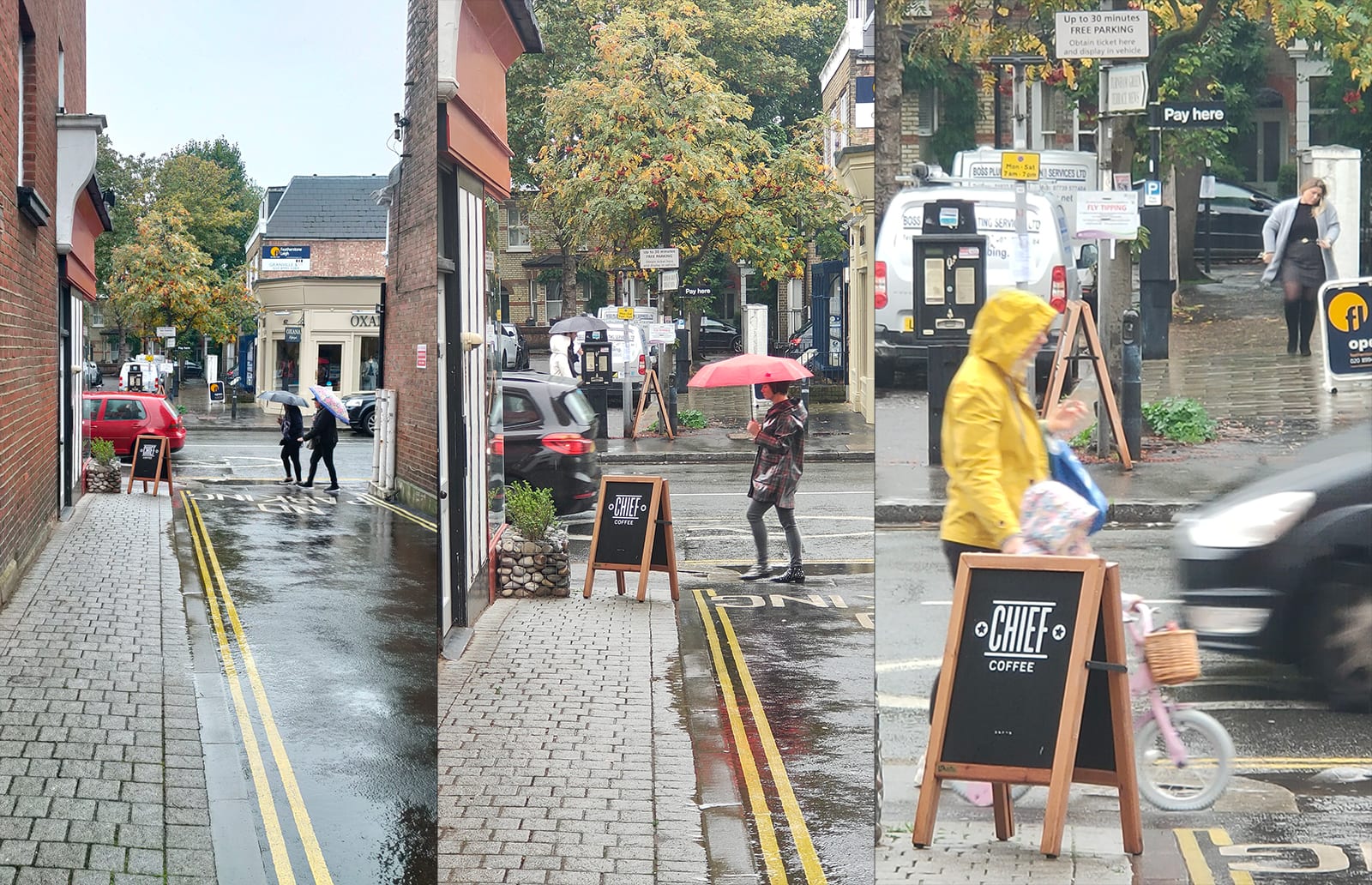 Perhaps because it's combining images, shutter speed seems to take the hit -- the coffee shop stand here seems pin-sharp, but the pedestrians are a blur. They weren't walking that fast -- it was a Sunday. Colors and low-light performance are strong, a testament to the advances we've seen in smartphone cameras, but if you're already using a flagship Galaxy, Pixel or iPhone, your shots might appear a little foggy and less punchy. That's the experience I had -- especially with the hybrid zoom. Note the color temperature differences between the zoom modes too.

So while the Reno 2 won't give you a top-class camera experience, it gives you latitude and flexibility to frame shots, to avoid elbowing crowds to get a decent photo at a concert or live event. The Pixel 3 (now supplanted) didn't have any optical zoom, let alone hybrid zoom features. The Reno 2 bests our pick of 2018's camera phones, at least in the telephoto stakes. The Reno 2 also has a new video stabilizing feature that smooths out wobbly footage. It keeps your footage while walking or running pretty smooth, but there's a fair degree of pixel blur too. I don't want to critique the feature too much, however. Whatever Oppo is doing here makes your handheld video much better -- and you're more likely to share or rewatch it.

On the front, the sharkfin pop-up selfie camera still looks cool, but I found the 16-megapixel camera itself was so far away from the screen that the direction of my eyes was, well, off. They were looking at the screen, while the camera floated above it. The screen is a 6.5-inch Full HD Plus (2,340 x 1,080) AMOLED display and takes pride of place on the Reno 2. Thanks to the pop-up camera, it takes up 93.6 percent of the front, with no notch or hole-punch to ruin the effect. 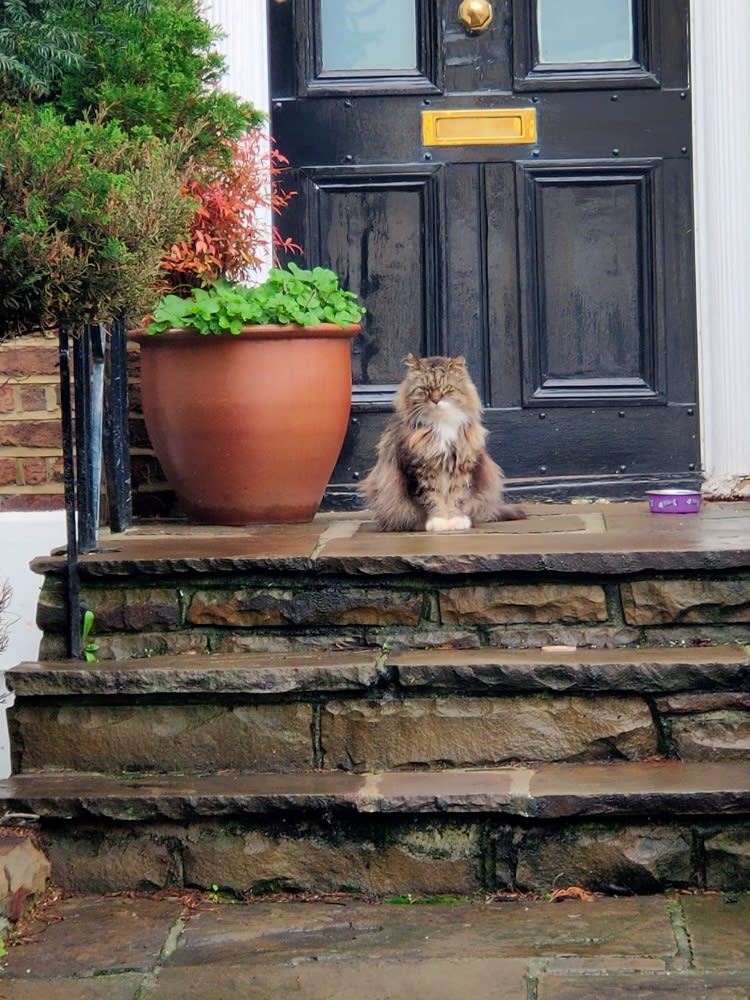 High-speed charging is an increasingly common feature now. Samsung has its own standard, ditto Qualcomm, and even Apple is finally catching up with USB-C charging far faster than what you used to get on iPhones. Oppo is pushing the boundaries here, and while the Reno 2 doesn't have 30-minute full battery charging (you'd need this Gundam-themed Ace model for that), the in-box adapter supports "VOOC 3.0" charging. This gets you to over 50 percent of the 4,000mAh battery (Oppo's biggest phone battery yet) in a half-hour, similar to Apple's iPhone claims, but at a fraction of the price. One feature that's fading into obscurity is also here: the headphone jack. Add the Reno 2 to the shrinking list of phones that do.

Confusingly, and Oppo's spokespeople couldn't really give a strong reason for why, the Reno 2 Z will also launch alongside it. The Reno 2's "little brother" has a pop-up, not sharkfin, front-facing camera and 19.5:9 screen ratio which makes it a little chubbier than the Reno 2 -- there's also a different processor inside, the Mediatek P90. Otherwise, there's next to no difference. The camera specs are the same, likewise battery and the same under-screen fingerprint reader. Oh and colors. The Reno 2 will come in Ocean Blue/ Luminous Black (seen here), while the Reno 2 Z will have a Sky White option, alongside Luminous Black. Oppo has priced this phone, which I haven't spent time with, at £329 (roughly $420) -- worryingly blowing its own Reno 2 out of the water.

The price is crucial here. The Reno 2 will launch in the UK at £499 (or 499 Euros, around $640) on October 18th, making it more expensive than a Pixel 3a and some Honor devices. Beside the fact that its own Reno 2 Z can do nearly everything the Reno 2 can on the cheap, Oppo's new mid-range phone does a good job of punching above its weight. It looks and feels like a flagship Android phone, and the camera feature set is above and beyond what similarly-priced phones are capable -- even if it's not class-leading. If only that 10x hybrid zoom had made it.