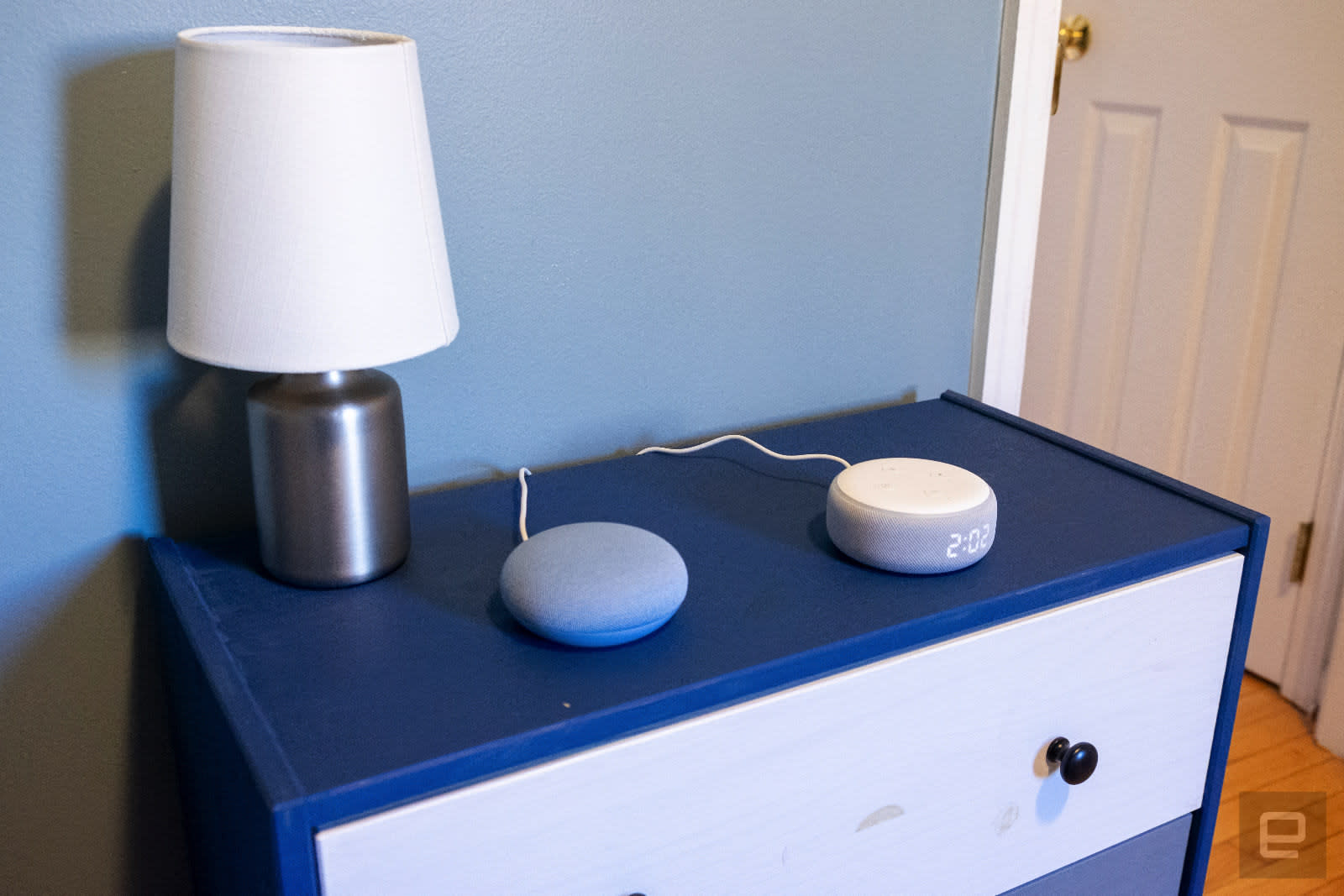 It comes down to whether you prefer Alexa or Google Assistant.

When Google introduced the Home Mini two years ago, it was playing catch-up to Amazon's Echo lineup. The Echo Dot, a tiny and affordable version of the larger Echo smart speaker, had been on sale for more than a year and a half, and Google was clearly responding to the Dot's popularity. The Home Mini bested the Dot in several ways, though, including a better speaker and more attractive design.

Naturally, Amazon responded a year later with the third-generation Dot. It ditched the glossy black plastic and took inspiration from the Home Mini's fabric-covered exterior. But more importantly, it fixed the older Dot's terrible speaker with something that was pretty impressive for casual listening.

This year, the back-and-forth continued with Google's Nest Mini, a $49 speaker that looks identical to the original Mini but includes a wall mount, proximity sensors and (you guessed it) an improved speaker and microphone setup. Amazon responded with a small tweak to last year's Echo Dot -- it's basically the same, but you can now spend an extra $10 to get a model with an LED clock on the front. These are two of the most popular smart speakers on the market, so if you're looking to pick one up this holiday season, here's what you should know before casting your lot with Alexa or Google Assistant. 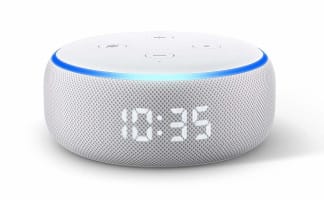 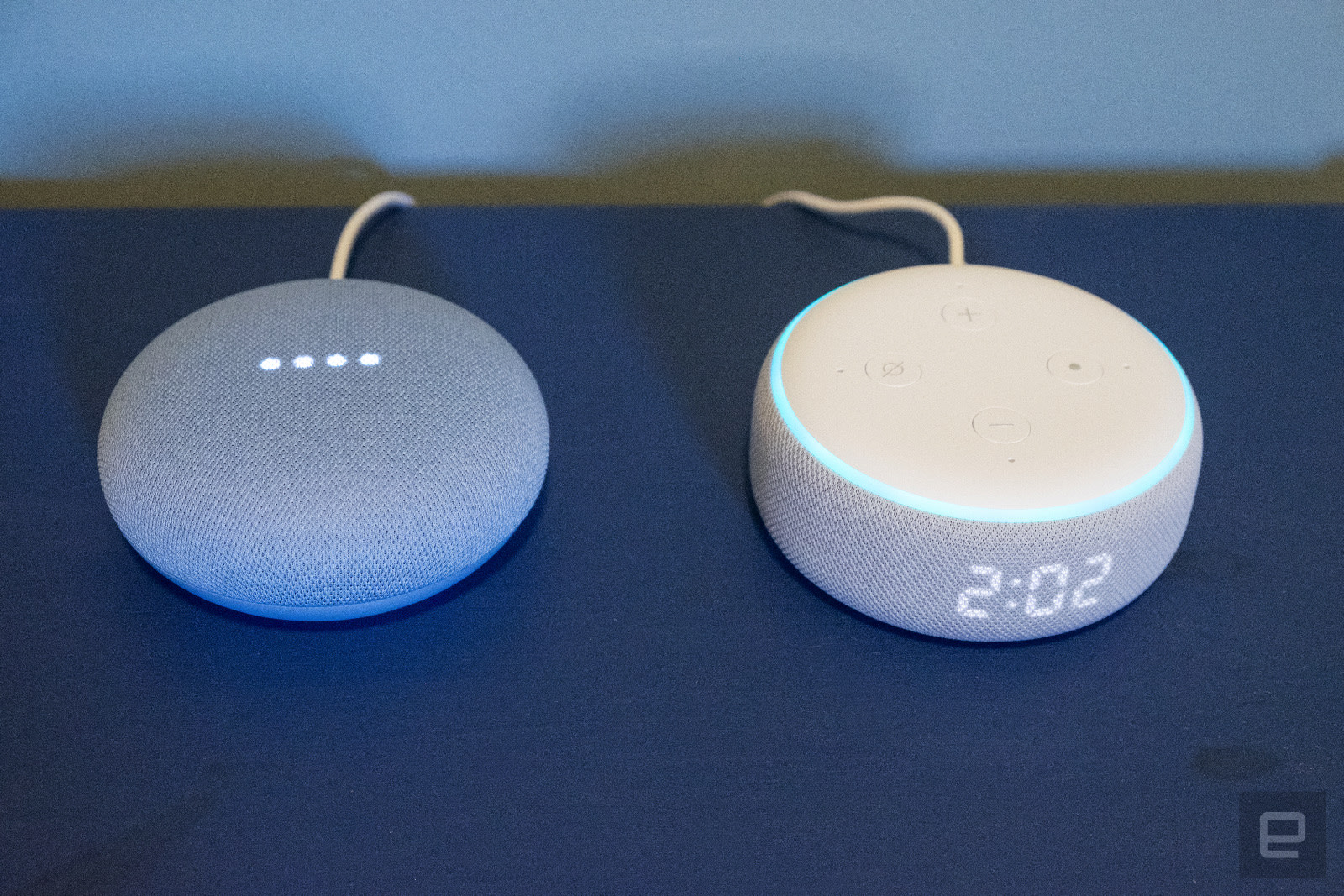 If you've seen the original Home Mini, there's almost nothing to distinguish this new model. It's a small, circular, fabric-covered speaker that comes in four colors (gray, black, coral and Sky Blue). In fact, the only way to know tell the Nest Mini from its predecessor is the small wall mount built into the back. I've never personally thought about mounting a speaker to the wall like this, but it's clearly something people were doing, and it's nice that it doesn't require extra hardware any more. Indeed, my colleague Terrence O'Brien said he would kill to get his Home Mini off the counter in his kitchen, so perhaps I'm underestimating the wall mount's appeal.

The only physical switch on the Nest Mini is a microphone mute switch on the back; the Echo Dot, on the other hand, has volume up and down buttons, a mic mute and a button to activate the speaker without saying "Alexa" first. The Nest Mini does have physical controls hidden under its fabric top, though. Tapping the left or right side of the speaker lowers or raises the volume, and you can tap the center to pause audio. That's a slight tweak from the original model; Google disabled the top center touch button after it was inadvertently causing the Home Mini to record and upload more sound than intended.

On the Nest Mini, tapping the center is re-enabled, but there's one other tweak: The Nest Mini has proximity sensors that cause it to light up and give you visual cues for where to tap when you reach for it. Honestly, it doesn't add much to the experience, and while I prefer the Nest Mini's unadorned top, the Echo Dot's buttons are certainly more user-friendly. That said, the Nest Mini's capacitive volume controls generally worked without an issue, though it's naturally more prone to inconsistency than a physical button like the Dot has.

As for the Echo Dot, this year's model includes the LED clock in the front that lights up and shows the time by default; it can also display the outdoor temperature or your timers. It's a clever feature, particularly if you're going to use the Dot as a bedside alarm clock, but it doesn't really change the experience. Otherwise, it's physically identical to last year's model, with fabric-covered sides and a plastic top. The Dot doesn't have the Nest Mini's handy wall mount, but it does include a 3.5mm audio out, so you can hook the Dot up to another speaker for better audio. That's something I definitely wish Google added to the Nest Mini this year, especially with the death of the Chromecast Audio.

Setup for both the Echo Dot and Nest Mini hasn't changed much in the past few years. Plug it into the wall, download either the Alexa or Google Home app to your smartphone, and follow the fairly obvious "add new device" prompts. During setup, you'll do things like adding your default music service so you can reliably ask the speaker to play songs. At this point, the Echo / Alexa ecosystem works with more services. Both support Spotify and Pandora, but Alexa also works with Amazon Music, Apple Music, Deezer and Tidal. On the Nest Mini, you can use YouTube Music or the dying Google Play Music services in addition to those aforementioned options. Making sure your music service of choice is supported by your speaker is crucial, so double-check that before deciding which to buy.

The Alexa and Google Home apps are also where you'll link up various smart home devices you have so you can control them by voice. Alexa originally had a big head start over Google Assistant, but at this point basically any smart home device worth buying supports both services. Again, it's worth double-checking to make sure everything you want to control is supported by your assistant of choice, but you likely won't have any problems.

At this point, the capabilities of Alexa and Google Assistant are well known. To quickly recap, you can ask both speakers to control devices in your home, play audio, answer questions, give you info from your personal accounts (e.g., Google Calendar) and link up to third-party services that make these speakers even more capable.

Given how mature both platforms are, the real question when comparing the Nest Mini to its predecessor is how its new speaker sounds. Google says the Nest Mini has twice the bass as the original, something not terribly easy to measure. It does produce fuller sound than the original, but that's not saying much. When I reviewed the Home Mini two years ago, I said that it was "severely lacking in the bass department and generally lacks the clarity you'd want for listening to music." Harsh but true. 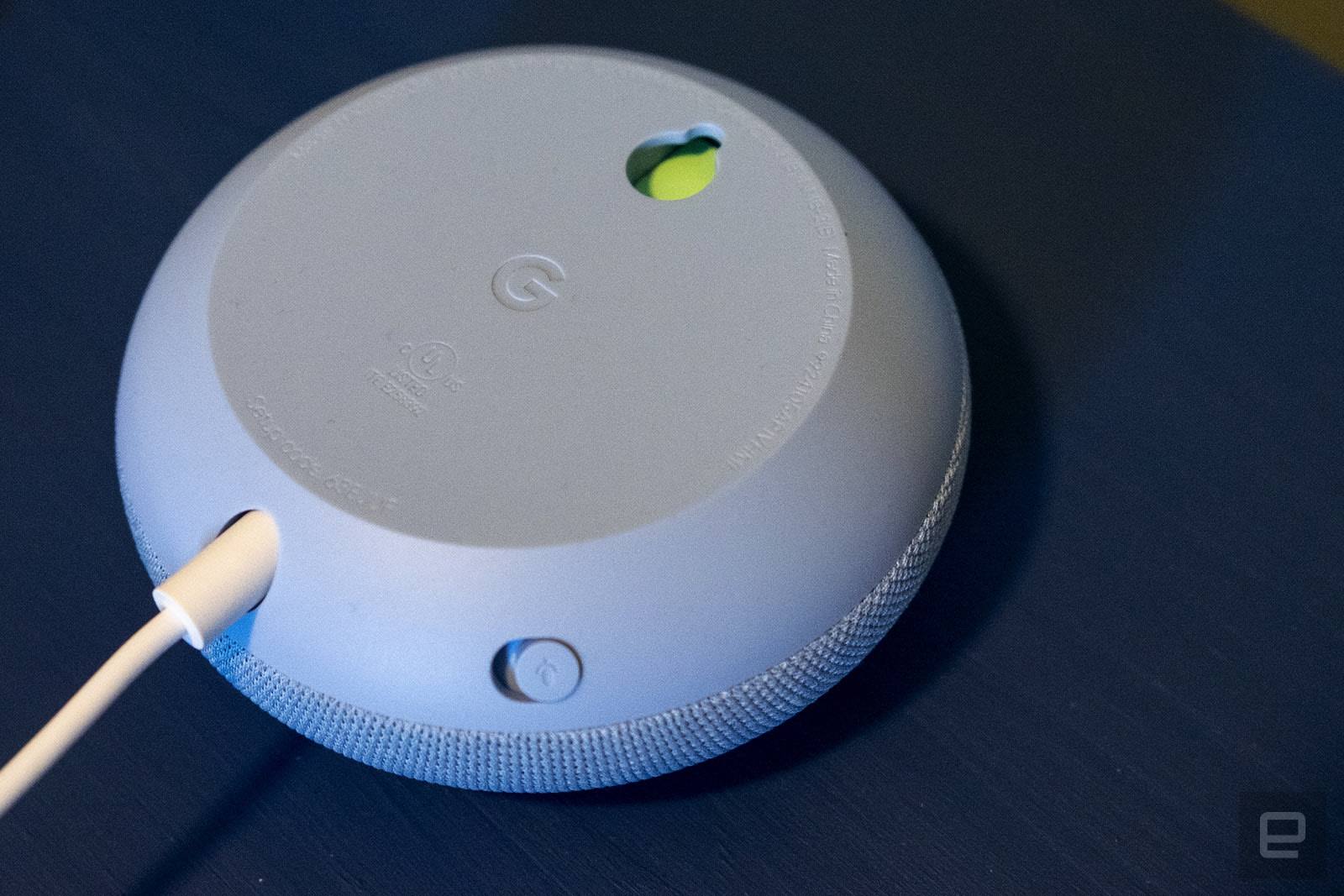 The Nest Mini, on the other hand, is much more pleasant. Doubling the bass doesn't mean a ton when the original speaker had nearly no bass to speak of, but the Nest Mini's sound profile is generally better balanced and less shrill. I didn't consider the Home Mini a viable option for listening to music, but I'd be perfectly happy with the Nest Mini for casual playback in a small room. It's certainly better than blasting music from your phone's built-in speaker, which is what too many people do these days. Indeed, putting aside my music snob sensibilities for a moment, the Nest Mini will probably be fine for large swaths of the population. It's surprisingly loud and keeps its clarity even at higher volumes, and that's about all you can ask for from a tiny $50 speaker. 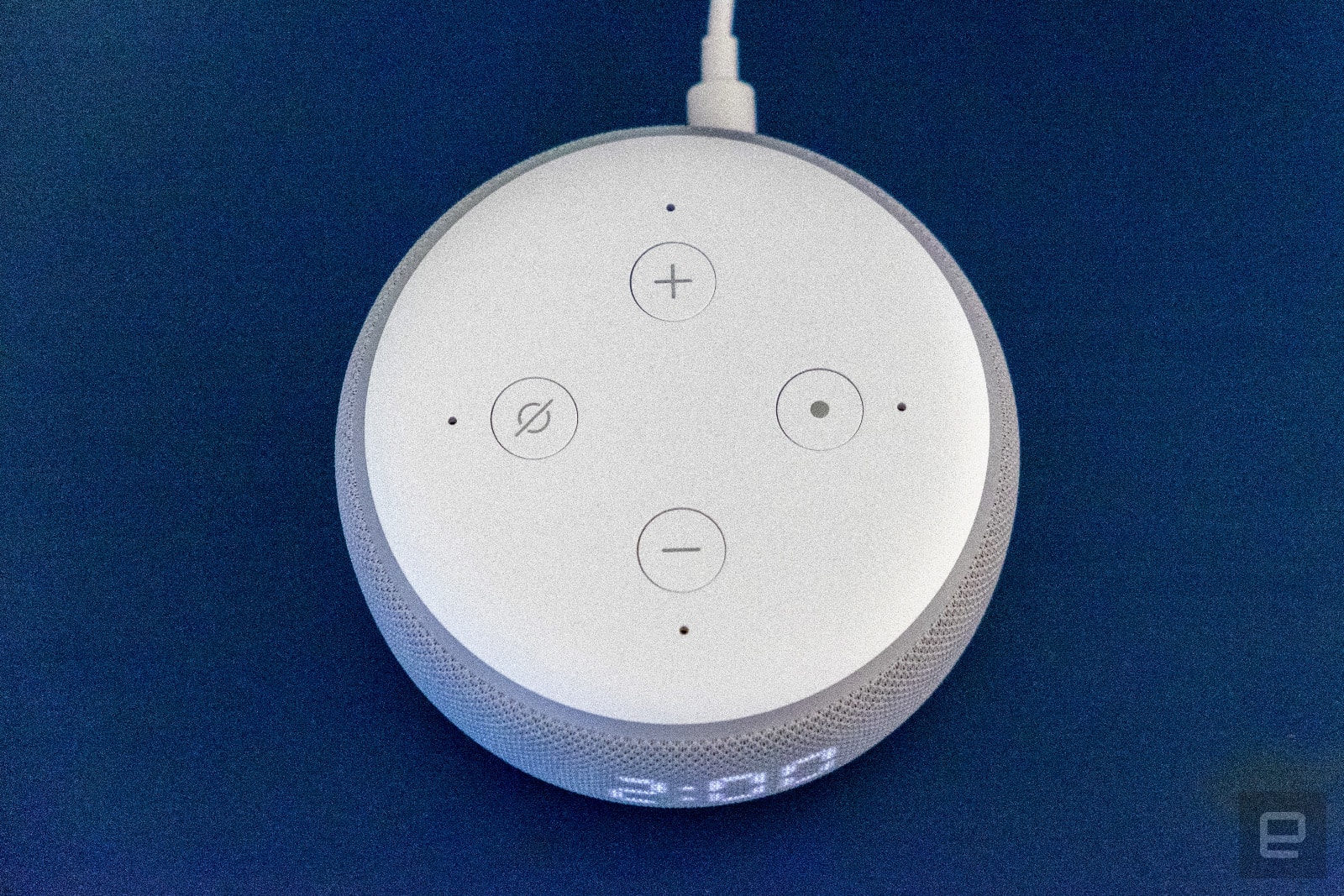 I can say the same about the Echo Dot. The Dot definitely has better bass performance than the Nest Mini, but at the expense of some precision in the mids and highs. Things can occasionally sound a bit muddier on the Dot, but it has a more pleasant thump. One thing is for sure: The Echo Dot that was introduced last year (and whose design is carried through to this model with the clock) is significantly better at music playback than the older models. Older Echo Dots sound terrible, full stop, while the new one redefined what I thought such a small speaker was capable of.

When doing some head-to-head comparisons, I thought the Nest Mini handled more complex arrangements better. A song like "Graffiti" by Chrvches has major bass, lots of high-frequency synth work, and a singer who hits some pretty high notes. Basically, there's a lot going on here -- and in that crowded soundscape, the Echo Dot came across a bit muddy. But on a more stripped-down track like "Appointments" by Julien Baker, the Echo Dot came across with a fuller, more true-to-life representation of the sparse vocals, piano, and electric guitar. The same can be said for a more robust, straightforward rock song like Death Cab for Cutie's "To the Ground."

Microphone performance is also worth mentioning, and the good news is that both speakers are pretty responsive, even when blasting music. I had to speak slightly louder than I expected to get both to reply, but once I adjusted I was able to get the speakers to pay attention without a problem. Google says that the Nest Mini has improved mics, but I can't really tell the difference. The good news is that either way, you shouldn't have a hard time getting the Nest mini or Echo Dot to hear you.

Which should you buy?

As for which you should buy, your decision ultimately comes down to which assistant you prefer: Google or Amazon. There are slight differences in music playback, but at this point both speakers are very close to each other in sound quality. More important than comparative speaker quality are whether Alexa or Google Assistant supports the music services you use. The Echo Dot's more extensive music service support, coupled with its physical buttons and 3.5mm output, give it the edge for me. But don't get me wrong, if you prefer Google Assistant (or just want a smart speaker you can easily mount to your wall, the Nest Mini is a fine option and a notable improvement over the original.