The $89 MPE instrument is all about lowering the barriers to making music.

I am simultaneously deeply fascinated by and deeply skeptical of strange niche instruments. As fun as a classic Stylophone is, for instance, it's pretty tricky to make decent-sounding music with. Even quirky controllers like Roli Blocks have a hard time finding a foothold in my life. But I still can't resist their allure. So of course when I heard about Orba, the new instrument from Artiphon, I had to check it out.

Artiphon originally made a splash with the Instrument 1, a futuristic-looking MIDI controller that raised well over $1,000,000 on Kickstarter. It took a lot of inspiration from the guitar but incorporated support for MIDI Polyphonic Expression (MPE). While it could seem a little daunting due to its somewhat alien appearance and embrace of (at the time) obscure music tech, it was designed to be approachable. And it largely succeeded. Orba takes that mission of lowering the barriers to music making to extremes.

For one, it's self contained. While you can use it as a MIDI controller with any app or digital audio workstation, it has built-in sounds and a built-in speaker, so you can just pick it up and start jamming. Plus its dedicated modes for playing scales and chords mean you don't need to know theory or have the dexterity of a violin virtuoso to get going. But part of it is also in the design, which is minimal and avoids anything that might scare off the non-musician.

All you have to do is look at Orba to know it's not going to be a traditional music-making experience. It looks like some piece of alien black citrus fruit cut in half. It's half an orb, with eight capacitive touch pads on the top. These are the primary ways you interact with Orba, and they allow you to tap out rhythms, bass lines and leads. But they're not the only ways to interact. There's also a gyroscope and an accelerometer inside that offer gesture control over your music.

Now, the version I saw was still very much in the prototype stage. You'll notice in the photos that the labels aren't printed on the top or sides yet. There is no branding. But even at this stage -- at least three or four months away from release -- it's a pretty solid-feeling device. The shell is made from plastic with glass fiber embedded in it, just like the OP-Z. That gives it a matte texture that's lighter but just as satisfying to hold as a piece of metal.

And I'm not gonna lie, I was pretty surprised by how substantial it felt. After watching the Kickstarter video in which someone uses it to play audible air guitar, I was expecting something cheap and gimmicky. But it is quite thoughtfully designed. 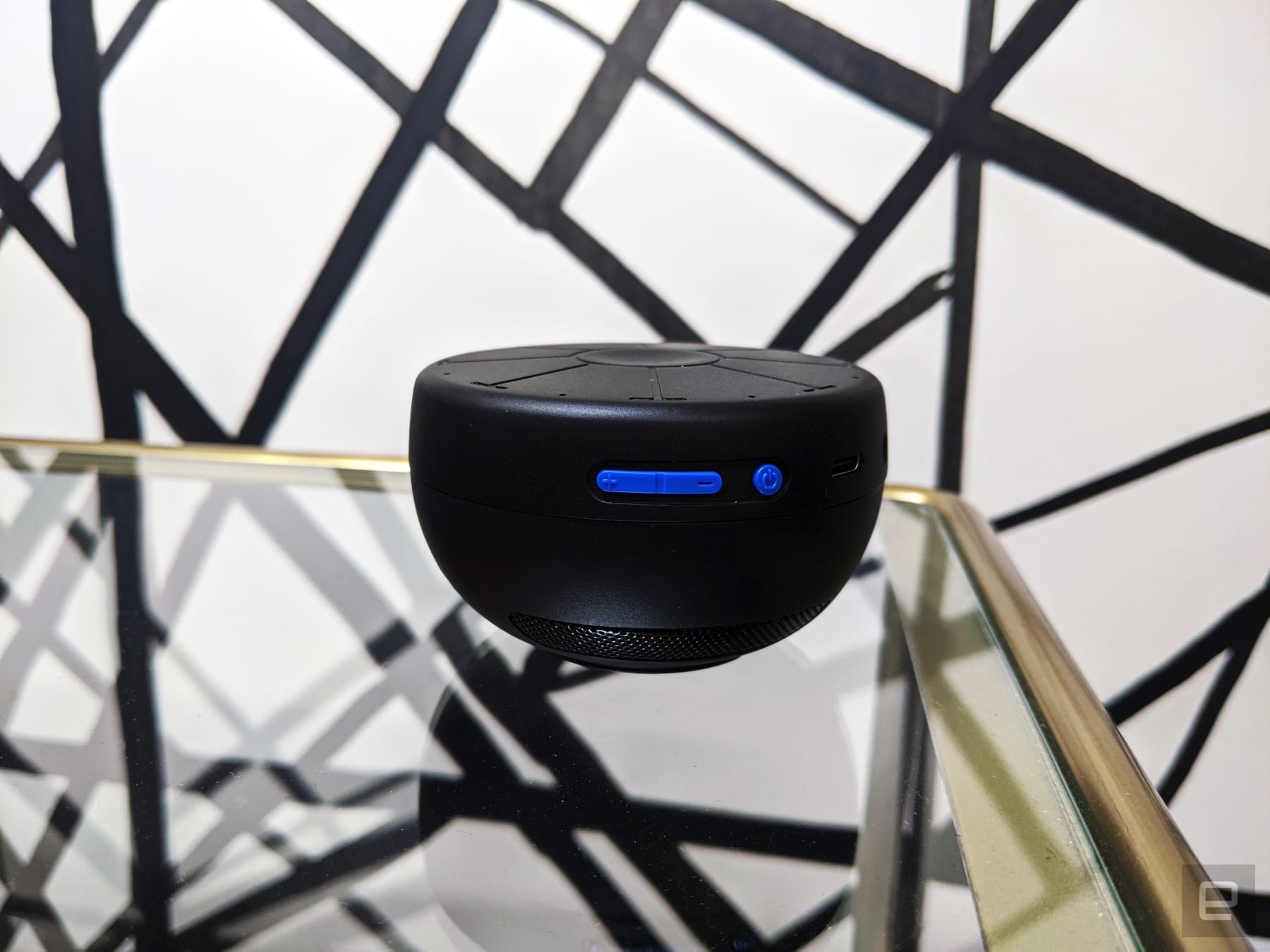 That extends to the rather simple interface. While the model I used was an early prototype, the final version will have clear labels on each of the pads. Holding the center button and pressing those pads will change from percussion to bass to lead or chords. There are even controls on the front for the looper.

Perhaps the most impressive thing about the pads, though, is how they handle velocity. The fact that they're velocity sensitive at all is pretty surprising. I can't think of any other portable instrument that combines velocity sensitivity with capacitive touchpads. And it's incredibly responsive. You can tap out pretty natural-sounding hi-hat patterns and really give your synth leads a sense of dynamics -- especially with certain instruments that respond not only to velocity but also to the amount of contact you're making with the pad for aftertouch.

Even the more seemingly gimmicky ways of interacting with Orba were pretty responsive and intuitive. Shaking it or tilting it to tweak the filter on the synth or add vibrato was pretty natural. (However, you will never catch me strumming the air with it as if it's some sort of oversize guitar pick.) Perhaps most satisfying was using it like a singing bowl by simply running my finger around the outer edge and letting it ring out. In fact, I could easily see myself picking up Orba throughout a particularly stressful day just to soothe myself -- a role currently filled by my Buddha Machine.

According to Mike Butera, the founder and CEO of Artiphon, the physical side of Orba is largely complete. The remaining work is mostly focused on the software, but that's a big part of the equation. Responsive controls and a surprisingly loud speaker are great, but on their own they're not lowering the barrier to music creation. Getting the sounds on board and completing the app are a major next step.

During my demo with Orba, it spent most of its time connected to a computer. The folks at Artiphon have built a new stripped-down synth that can run on the low-power processor inside. But there are still a lot of tweaks being made to the sounds. And the app, which will eventually allow you to load different sound collections, control loop lengths and even choose scales, wasn't ready to be shown off in any capacity yet. 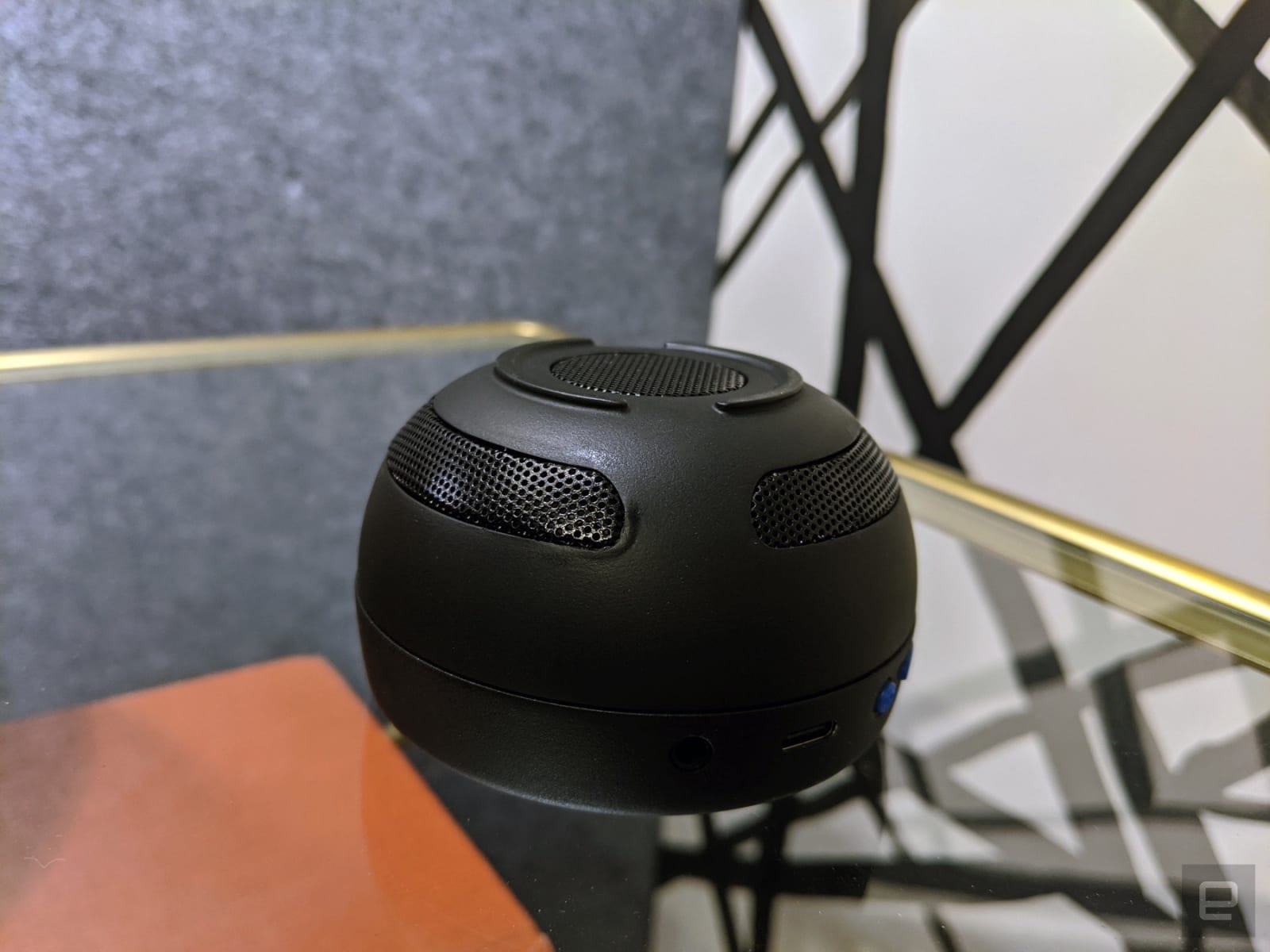 Right now Orba is basically a MIDI controller with a built-in audio interface. But even that is still pretty impressive, especially when paired with the right instruments. At one point Butera fired up a remarkably realistic physically modeled cello. The MPE capabilities of Orba brought the instrument to life in surprising ways. And the fact that the sound was coming out of the palm of my hand was a strange and unexpectedly enjoyable experience. It doesn't hurt that the speaker is pretty decent too. It's not gonna fill an actual performance space, but it's loud enough to make conversation difficult when turned up.

I came to Orba as a bit of a skeptic. I'm not going to say that my hour or so with the device turned me into a believer. But I'm definitely more intrigued than I was before, especially considering its price of $89. That's bordering on impulse-purchase territory and puts it in the same ballpark as the higher end of Teenage Engineering's Pocket Operator lineup.

Orba is probably never going to find itself onstage at MSG being wielded by a pop icon. But as a couch synth or living room instrument, it holds a lot of potential. Because if you have any downtime at all, it's better spent tapping out a rhythm on Orba than it is scrolling through Twitter.