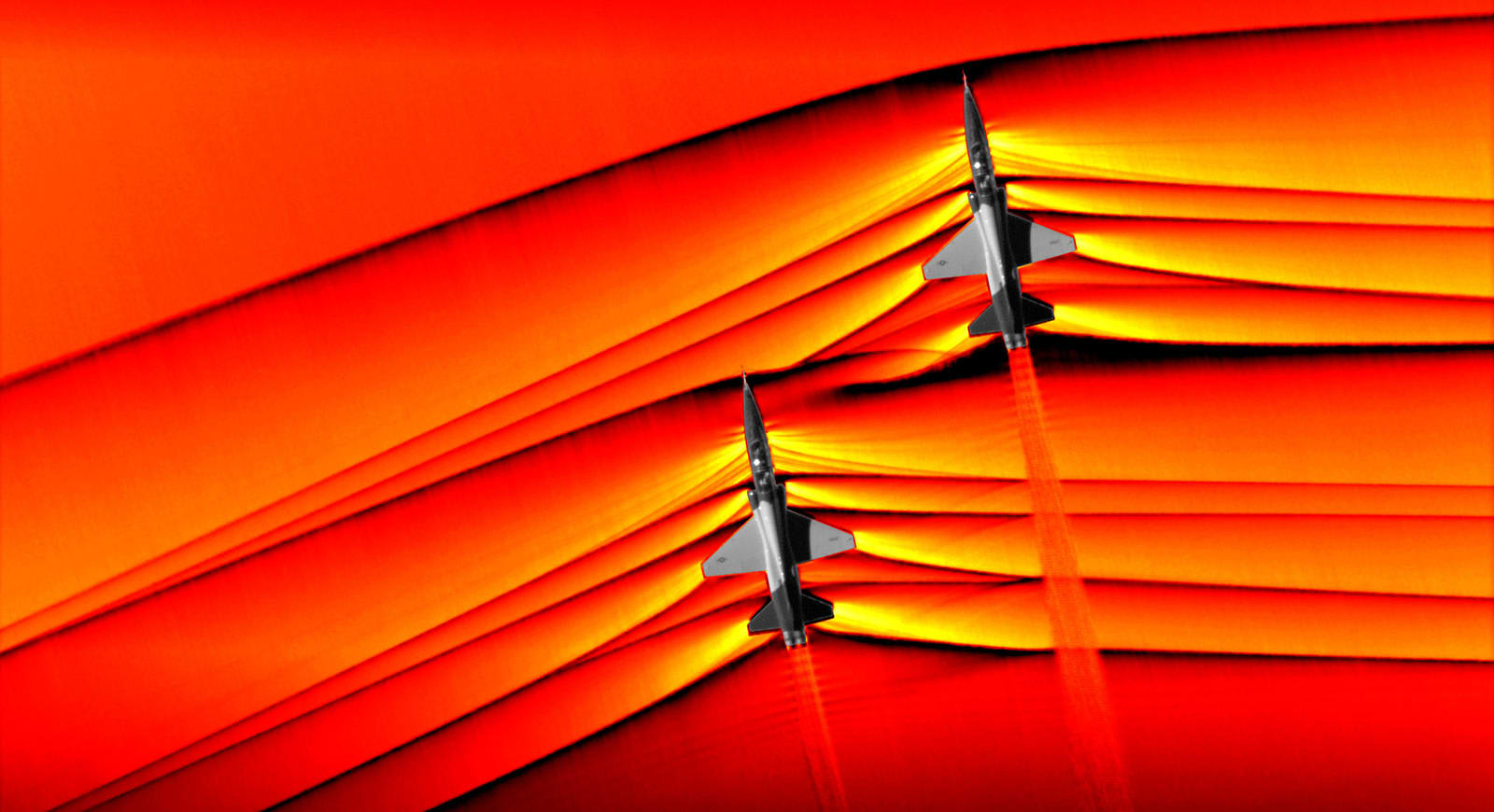 NASA has developed a new imaging technique that let them capture, for the first time, the interaction of shockwaves from two supersonic jets. They were taken by a new, high-speed camera system developed to help NASA design a supersonic airplane that produces much quieter sonic booms. "We never dreamed that it would be this clear, this beautiful," said NASA physical scientist J.T. Heineck.

They show the shockwaves, or rapid pressure changes that result when an aircraft flies faster than the speed of sound, which is about 682 MPH at 30,000 feet. The above image was taken in black and white, but later colorized to show the relative air pressures around the shock waves.

"What's interesting is, if you look at the rear T-38, you see these shocks kind of interact in a curve," said research engineer Neal Smith. "This is because the trailing T-38 is flying in the wake of the leading aircraft, so the shocks are going to be shaped differently. This data is really going to help us advance our understanding of how these shocks interact."

NASA has been able to image single shockwaves for awhile using a technique called Shlieren photography, which takes advantage of the fact that light rays bend with changes in fluid density. Really loud sonic booms are produced when multiple shocks merge together, so NASA refined the technique so that it would work better with multiple shockwaves.

The imaging system is crucial to NASA and Lockheed Martin's development of the X-59 Quiet SuperSonic Technology X-plane, or X-59 QueSST. It's designed to reduce explosive sonic booms -- which can cause damage over inhabited areas -- to a low rumble.

If such supersonic flights become legal over land, they'll change the face of air travel by reducing many trips by up to half. Several companies are working on quiet supersonic jet designs and one of them, Boom, has even taken deposits from airlines.

Before any overland flights can happen, however, NASA will have to convince the FAA and other regulators that such planes won't cause damage or frighten inhabitants below. By producing images that dramatically illustrate the data, the new camera system represents a big step toward that goal. "We're seeing a level of physical detail here that I don't think anybody has ever seen before," said NASA senior engineer Dan Banks. "Just looking at the data for the first time, I think things worked out better than we'd imagined. This is a very big step."

Source: NASA
In this article: gear, Jet, NASA, shockwave, space, supersonic, T-38, TheBigPicture, thenewbigpicture, X-59QueSST
All products recommended by Engadget are selected by our editorial team, independent of our parent company. Some of our stories include affiliate links. If you buy something through one of these links, we may earn an affiliate commission.