A beginners guide to buying a synth

Entry-level synths are more capable, varied and cheaper than ever. Here's what to get.

T. O'Brien
@TerrenceOBrien
March 12, 2020 2:00 PM
In this article: art, arturia, arturia microfreak, av, buyers guide, BuyersGuide, gadgetry, gadgets, gear, korg, korg minilogue, korg monologue, microfreak, minilogue, monologue, music, musical instrument, review, roland, roland system-1, synth, synthesizer, system-1, thebuyersguide, commerce
All products recommended by Engadget are selected by our editorial team, independent of our parent company. Some of our stories include affiliate links. If you buy something through one of these links, we may earn an affiliate commission. All prices are correct at the time of publishing.

It's no secret that there's a growing interest in synths, drum machines and other electronic music instruments. There are many reasons for that -- most obviously because electronic music is now popular music. But it's also because improved technology and manufacturing have driven the prices of such devices low enough that even the most casual musician can dabble. Plus there are a dizzying number of options for you to choose from at the entry level.

So how do you get started? Should you get a portable and affordable Volca? Or that new Model:Cycles that we liked so much? And are Behringers actually any good? I know you have a lot of questions, so let's get right to it.

Before you buy a synth

Let me begin by suggesting that if you're just looking to explore and see if synthesizers are for you, get some free soft synths and a MIDI controller. It'll be cheaper and let you try out different styles of synthesis before you go out and drop a bunch of money on dedicated hardware.

If you're ready to make the leap to a physical synth, then let's set some ground rules for your first purchase. For one, there's no need to run out and drop upward of $1,000 -- $400 is more than enough to get you an excellent instrument that you'll be playing for years to come.

I also strongly suggest you stick to something with a keyboard. While you could potentially get a bit more synth for a bit less money by ditching it (like with the Behringer Neutron), when you're just starting out, the immediacy of keys will be welcome.

Last, it needs to be easy to use and make music with -- not just noise. Now, obviously, this is subjective: One person's noise is another's symphony. (As someone who owns and legitimately enjoys Lou Reed's Metal Machine Music, you don't have to tell me.) But chances are that you want to make more than just bleeps, bloops and drones. So, as interesting as it is, the Volca Modular is out. These sorts of instruments are much better suited as low-cost expansions of an existing setup.

The best synth for most people: Arturia MicroFreak 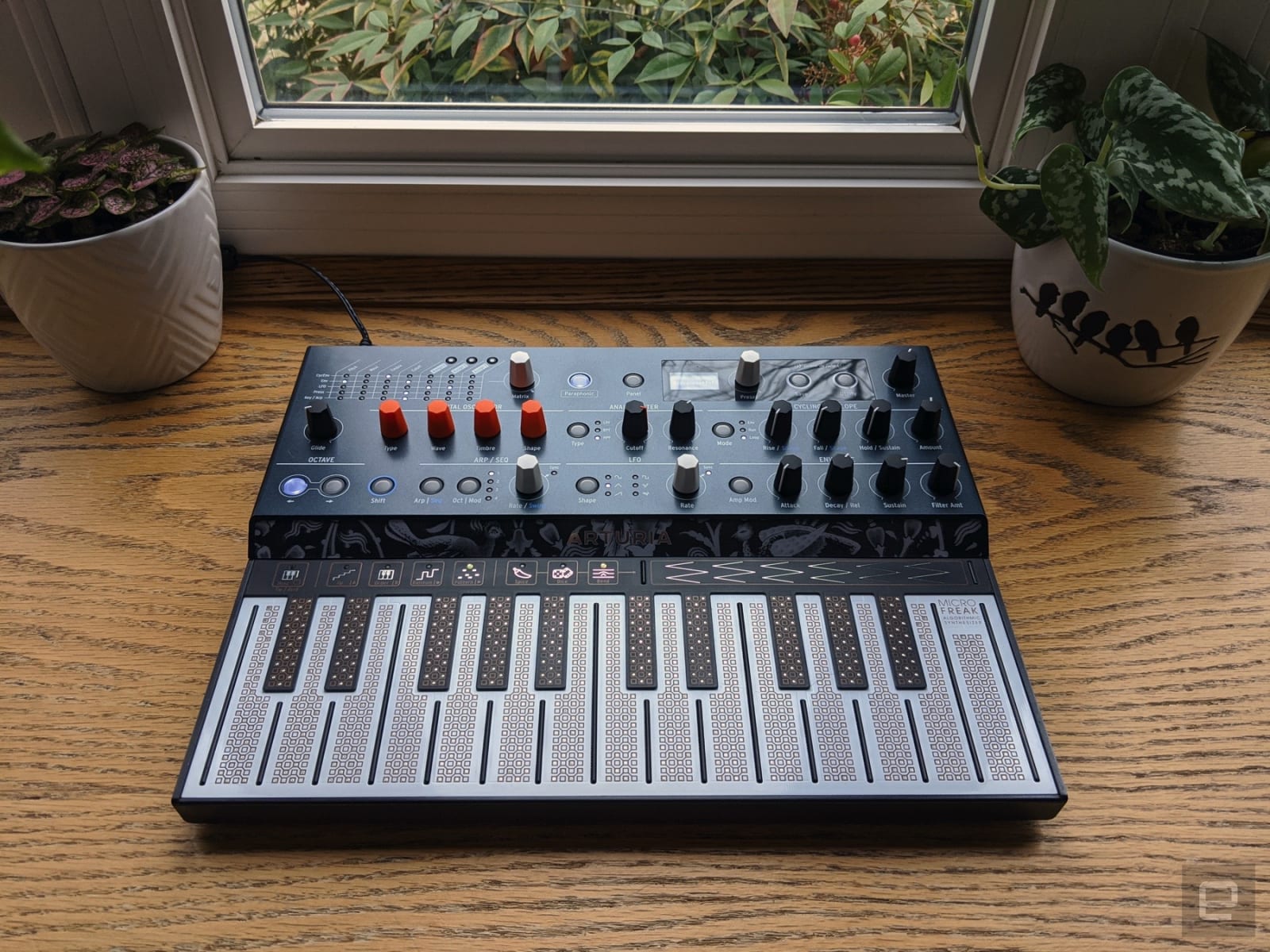 Considering these requirements, it's honestly pretty easy to recommend a single instrument for the vast majority of people: the Arturia MicroFreak ($349).

Now, I know there are a bunch of would-be analog purists out there screaming at their computer screen. And I have an alternative suggestion for you, so bear with me. But first, let me tell you why you should consider the MicroFreak, even if you're skeptical.

Arturia's instrument is a four-voice paraphonic digital synthesizer, so it can play four notes simultaneously. Unlike many other synths that are labeled as paraphonic, each voice has its own voltage controlled amplifier (VCA). That means that it actually behaves more like a true polyphonic synth, as each note will have its own attack and decay stage. On something like the Volca Keys, which is paraphonic, all the voices share a single VCA. So every time you press a key, the amp envelope is reset. This means that if you hold down one note and then press another one, the volume of the original will momentarily drop out and rise back up in sync with the second note. That's not necessarily a problem for sounds with short attacks like bass and keys. But if you're looking to lay down some pads, it can create some unnatural stops and starts.

What really makes the MicroFreak so compelling though is its incredible flexibility and variety of sounds. Inside are 13 oscillator types, all with a staggering array of options for shaping their sound. Frankly there are few hardware synths with this many options for sound sources, especially for less than $500. There are basic wave shapes, for clean digital sine or saw tones, and super wave (in which several basic shapes are stacked) for giving you those thick trance-style sounds that are all over songs from the likes of Charli XCX and Sophie. There is also a two-operator FM synth engine and a virtual analog option, both borrowed from the well-regarded Plaits eurorack module. Plus a Karplus-Strong engine, which physically models the bowing or striking of strings. There's even a speech synth engine for when you want to get your robot choir on. 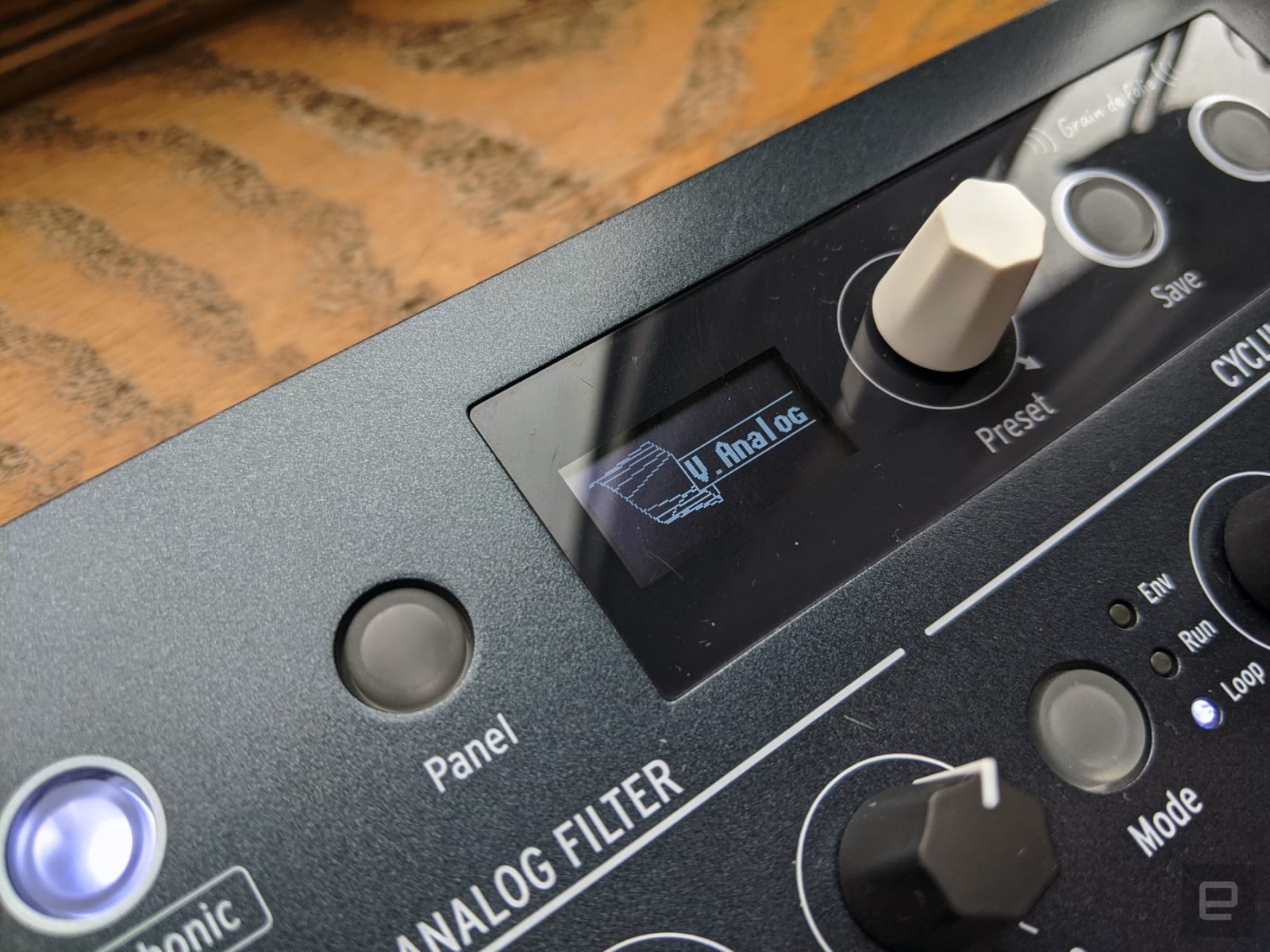 There are so many choices -- from traditional to just plain bizarre -- that almost everyone can find a sound they like here. And those engines borrowed from Mutable Instruments' $260 Plaits are a real draw. Plaits is one of the most popular sound sources in the current modular-synth craze, and being able to get those tones from an entry-level synth with a keyboard is pretty amazing.

Additionally, the MicroFreak has an incredibly rich modulation matrix. Think of this as pseudo-modular synthesis. Whereas something like the Minilogue XD has an LFO (low frequency oscillator) that can be used to manipulate the pitch, cutoff of the filter or the wave shape -- but only one at a time -- the MicroFreak's LFO can be used to control up to seven different parameters simultaneously. And three of those modulation destinations are completely customizable, not to mention the LFO is just one of five modulation sources. You can connect all sorts of things inside the virtual wiring of the synth to create constantly evolving pads, crazy moving leads or bonkers sound effects.

Plus, the MicroFreak has an arpeggiator, a 64-step sequencer (though, admittedly the sequencer isn't great) and two features called spice and dice that can introduce some unpredictability and randomness into your sequences.

If you want to have the most flexibility possible on your initial voyage into hardware synths, I'm confident saying that there's nothing like this at the entry level. And the fact that you can usually find it for $300 is insane. 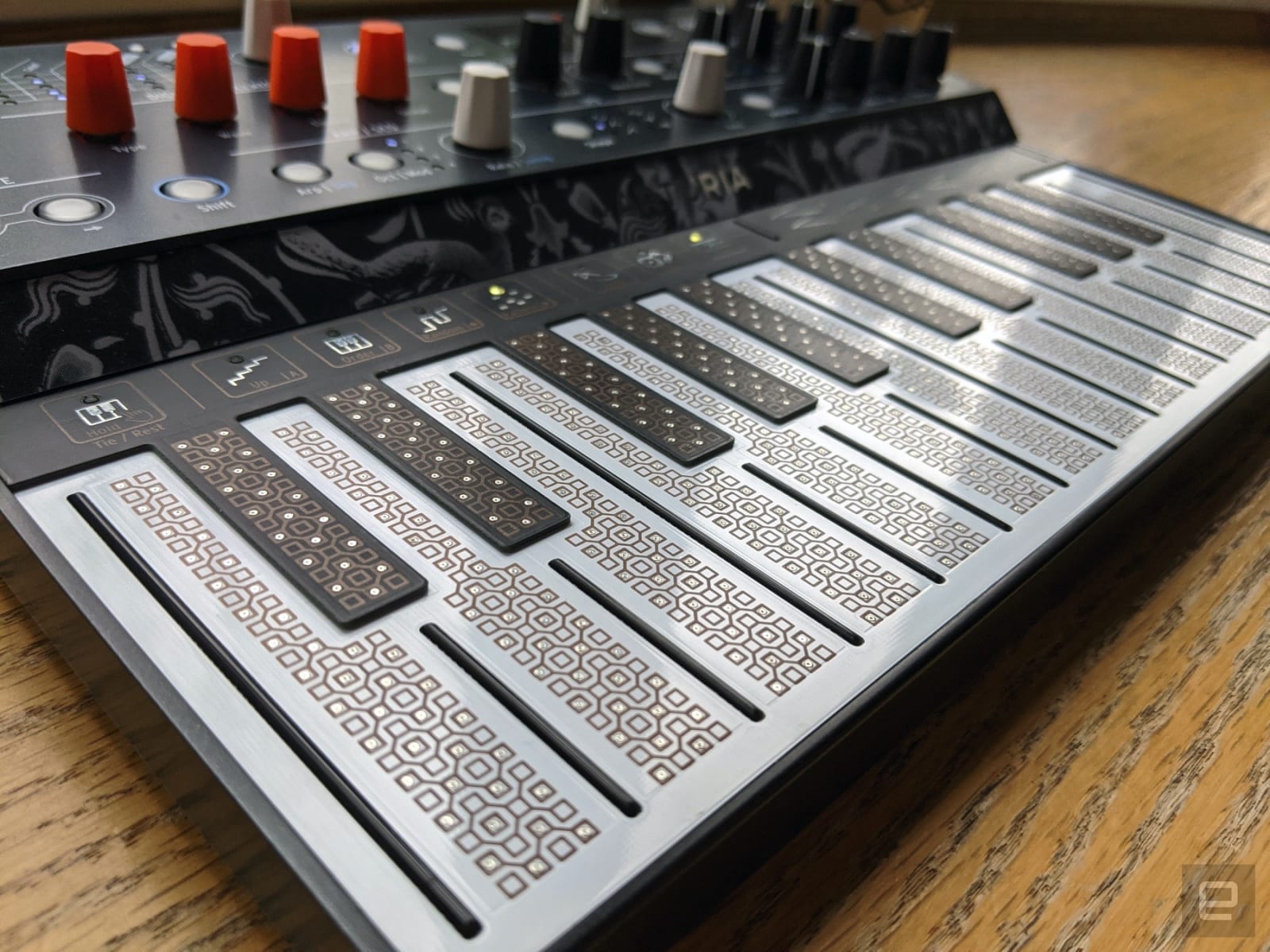 Of course, the MicroFreak is not without its faults and controversial features. Let's start with the most immediately obvious: the keyboard. It's... not really a keyboard. It's an exposed circuit board that you play by simply touching it. It definitely takes some getting used to, but honestly the "keys" are not as bad as you'd think. However, if you're coming from a piano-based background, you may hate the lack of key travel. Velocity isn't measured by how hard you strike the keys but instead by how much of your skin is touching them. On the plus side, the keys support polyphonic aftertouch, so you can alter individual notes in a chord simply by laying more of your finger down.

The MicroFreak can also sound a little thin on its own. It definitely begs to be paired with effects. A little reverb and delay can definitely make it sound much richer and more alive. And some overdrive can help rough up those pristine digital edges.

Last, the sheer array of options at your fingertips might prove a little intimidating if you're a complete novice. But that's one of the many reasons I recommend starting with some free VSTs to cut your teeth. 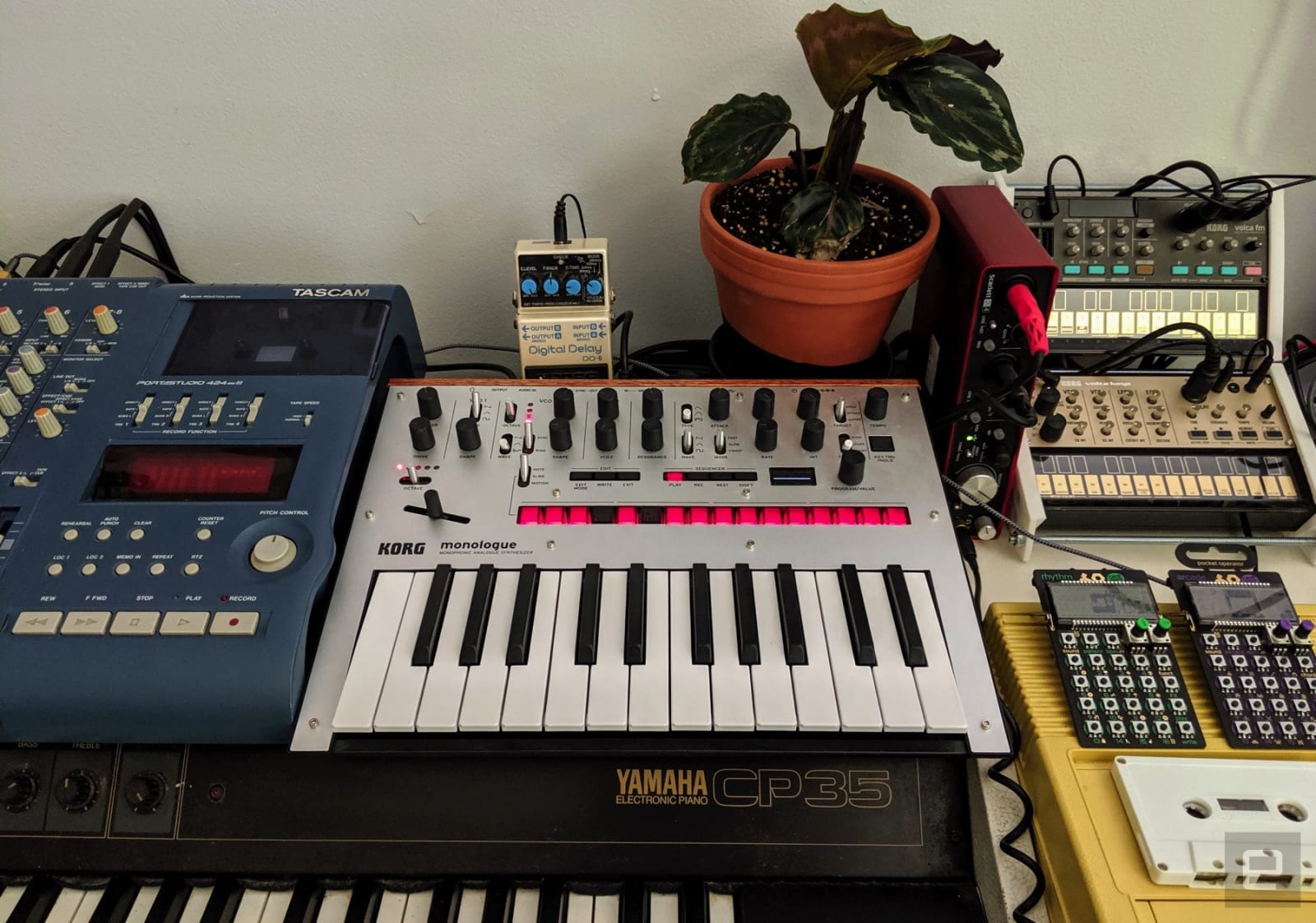 Now, if you have no interest in using a computer to make music and want something simpler to start with, or if you have your heart set on an analog synth, then you should probably pick up the Korg Monologue.

The Monologue is also usually $300, though prices have fluctuated from as low as $199 last year to as much as $345 recently. It's a 100-percent pure-analog monosynth, and it's amazing. The knobs and switches are deeply satisfying to turn and flip. And the small screen acts as an oscilloscope, so you can literally see your sound.

Its dual oscillators are incredibly rich and can handle everything from P-funk basslines to gnarly industrial drones to Aphex Twin-style freakouts. In fact, Mr. Richard D. James himself designed several of the presets on the Monologue. The filter is particularly squelchy and great for getting aggressive sounds out of the Monologue, especially when combined with the onboard drive effect.

The 16-step sequencer is also a highlight. While that is short compared to the MicroFreak, the Monologue sequencer is much easier to use. And Motion Sequencing makes it simple to record parameter changes on a per-step basis. You can even program a drum beat on the Monologue if you have patience.

Oh, and it can be powered by a few AA batteries, which makes it a great fit for a mobile music-making setup. However, it's worth mentioning that Korg doesn't include an AC adapter in the box, which is, to put it mildly, infuriating.

You are making some sacrifices here. Since it's monophonic, you can't play chords, and pads aren't exactly its bread and butter. And the fact that envelope only has attack and decay stages, with no sustain, is odd to say the least. It's also quite easy to quickly fill up the 100-patch memory slots. 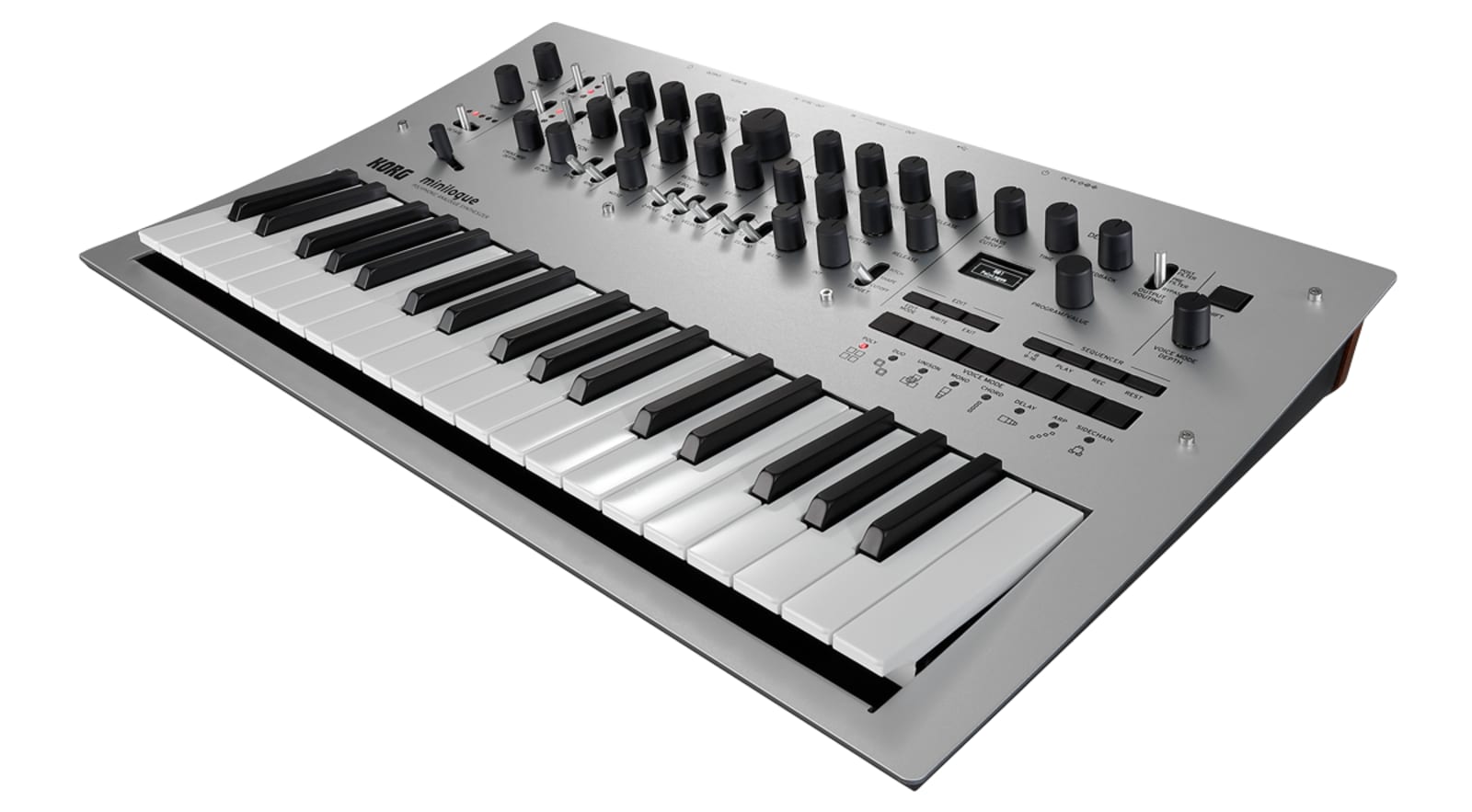 If your goal is warbly analog pads and you have a bit of extra cash to burn, you could upgrade to the Korg Minilogue. It's a four-voice polyphonic synth, and big brother to the Monologue. At $500 new, it's a bit out of our price range, but it can be easily found for less than $400 used.

The Roland System-1 is another machine that's a little out of our price-range when new at $550. But it can also easily be found for less than $400 used. It's a digital synth, but its four virtual analog voices are pretty convincing. It's ugly as sin and the keyboard isn't velocity sensitive, but it supports Roland's Plug-Out system, which allows you to add emulations of classic synths through software expansions.

Last piece of advice: Don't be afraid to buy used. You can save quite a bit of cash if you pick up any of these secondhand.