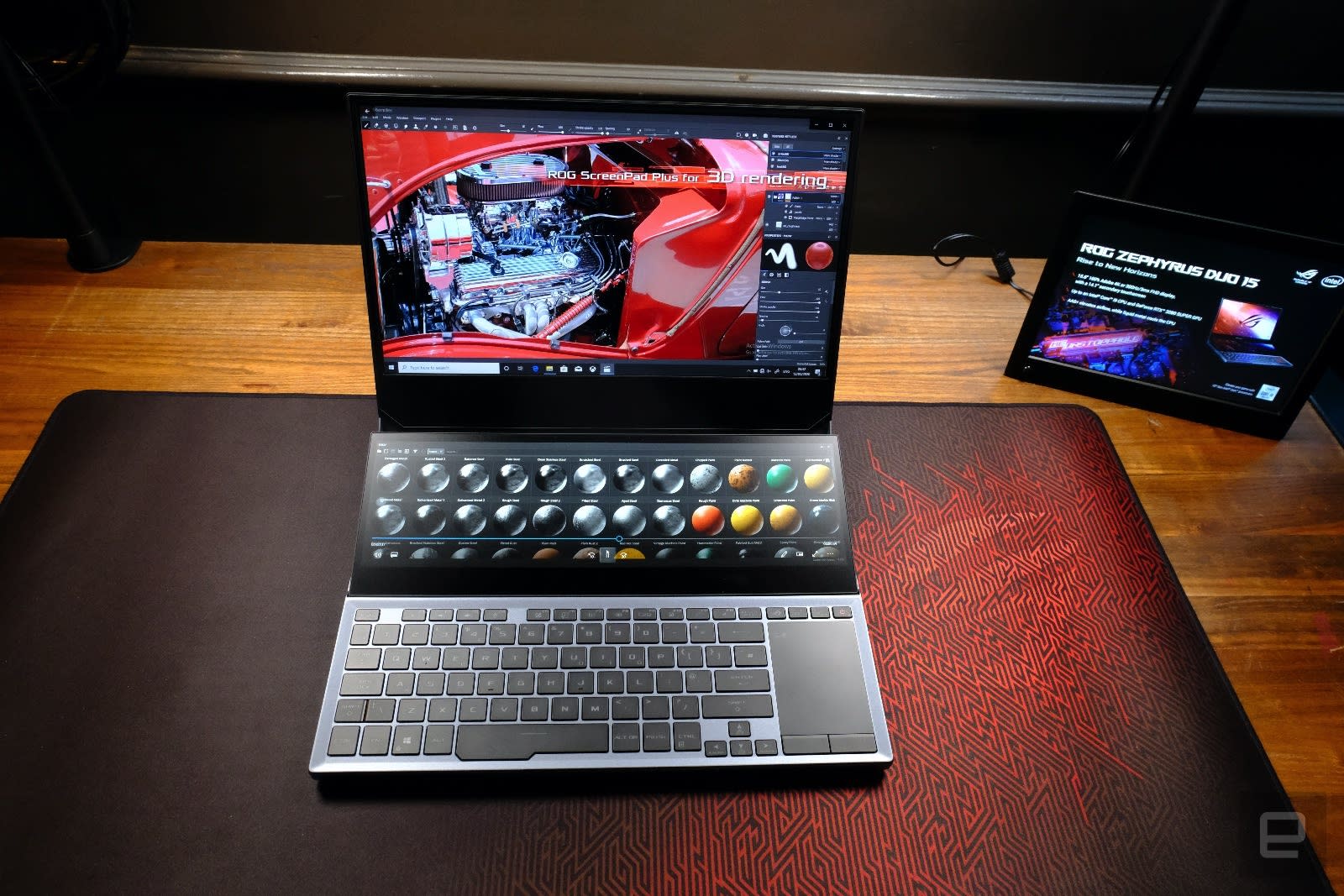 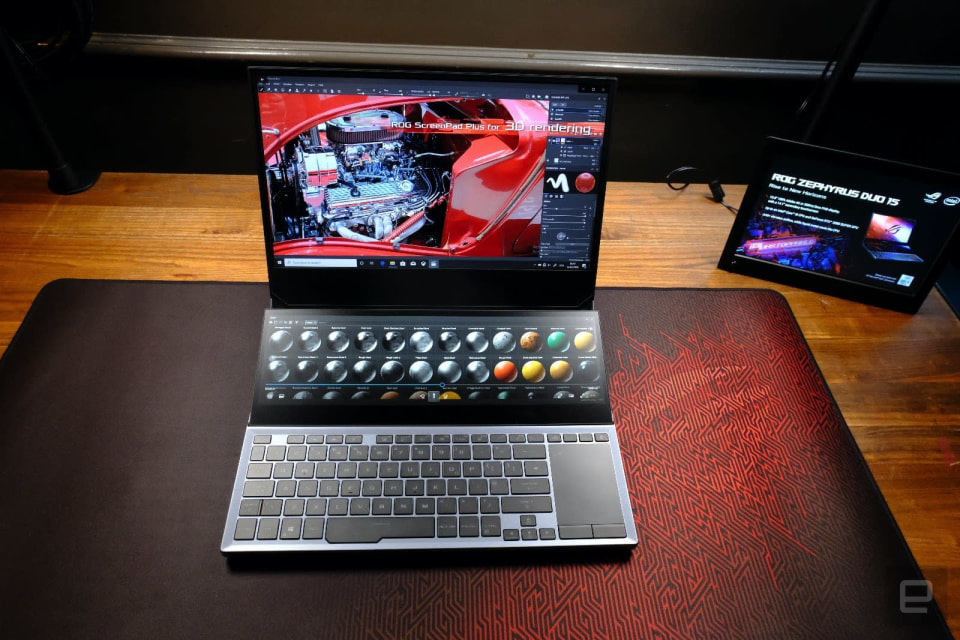 ASUS has been pushing laptops with second screens for a couple of years now, but it's still searching for a winning formula. Last year's ZenBook Pro Duo pushed the keyboard down to the edge of the laptop's body, with the rest of the surface housing a second screen. The problem with that configuration was an awkwardly placed trackpad. But, you know who cares less about trackpad placement? Gamers. Hence, almost a year later, the company's Republic Of Gamers (ROG) division has its own spin on the concept: the ROG Zephyrus Duo 15.

Zephyrus is ROG's flagship gaming laptop series and often acts as a showcase for bleeding-edge tech and design features. The first model in the range was the standard-bearer for NVIDIA's Max-Q design to help get the most of its small thermal profile. Then in 2017, it showed off a machine that measured just 16.9mm thick when closed, but packed a powerful GTX 1080 card inside. The profile was far narrower than its rivals, like the Razer Blade.

The Zephyrus Duo has an arguably more noticeable feature. Yes, there's a fairly big chin at the bottom of its primary display, but that's not lazy design. The ScreenPad, sorry, ROG ScreenPad Plus, articulates, angling upwards and making it much easier for you to see both displays at once. The 14.09-inch ScreenPad Plus packs a UHD (3,840 x 1,110) AH-VA 60Hz touchscreen, with a non-glare coating and stylus support. And it should make it easier to stream a game and keep an eye on your stats without it cluttering up the main screen.

Squint and you'll notice that the displays look a little bit like Intel's dual-screen concept laptop, the Honeycomb Glacier. That, too, had a rising secondary display, although in that case, both screens were joined together with a hinge for more customization. We suspect that the current implementation is a smart compromise, not to mention a way of getting more air to the Duo 15's overpowered internals.

It's not lacking in capital-P power, either, with a 10th-generation Intel Core i9-10980 HK (an 8-core, 16-thread chip) paired with NVIDIA's GeForce RTX 2080 Super. The Super is a small tweak on the existing 2080, with 128 more CUDA cores, two additional Ray Tracing cores, a pair of extra Texture Cores and 8GB DDR6 RAM clocked at 15.4Gbps rather than the 14Gbps of its predecessor. You'll have the option of up to 32GB RAM, and you can spec it with up to 2TB SSD with Raid 0 support.

To prevent the Duo from heating up and doubling as a pizza stone, ASUS has had to work hard to get the cooling right, with a new AAS Plus (Active Aerodynamic System.. Plus) system that promises 30 percent more airflow into the laptop. The company is also using Thermal Grizzly's Conductonaut compound between the CPU, GPU and their respective heat sinks. Conductonaut is beloved by PC nerds: a "liquid metal" that's more conductive than regular thermal paste to better dissipate heat. In a laptop, it's going to hopefully result in a slightly cooler and quieter machine.

With the focus on the second screen, it's easy to forget about the 15-inch primary display which has some tricks of its own. Buyers will get the choice of either a 300Hz/3ms FHD (non-touch) display, or a 4K Adobe RGB non-touch model, with both choices being Pantone-validated as a matter of course.

ASUS ROG has also said that the Zephyrus Duo 15 will lead a new range of Zephyrus gaming laptops, each re-designed to house new 10th generation Intel CPUs. That includes the Strix SCAR 17, with NVIDIA's GeForce RTX 2080 Super, a 17.3-inch, 300Hz FHD display and the option of an Intel Core i9-10980HK CPU, up to 32GB RAM and three SSD slots that can be configured in Raid 0.

Similarly, a new Strix G15, which now comes in Electro Pink, packs a 10th-generation Core i7, RTX 2070 Super and a 240Hz FHD display. And the aforementioned Thermal Grizzly's Liquid Metal will be used in every one of these new models to bolster heat dissipation and improve thermal performance across the range.

In this article: gaming, gear, GX550, personal computing, personalcomputing, asus, dual-screen, duo
All products recommended by Engadget are selected by our editorial team, independent of our parent company. Some of our stories include affiliate links. If you buy something through one of these links, we may earn an affiliate commission.