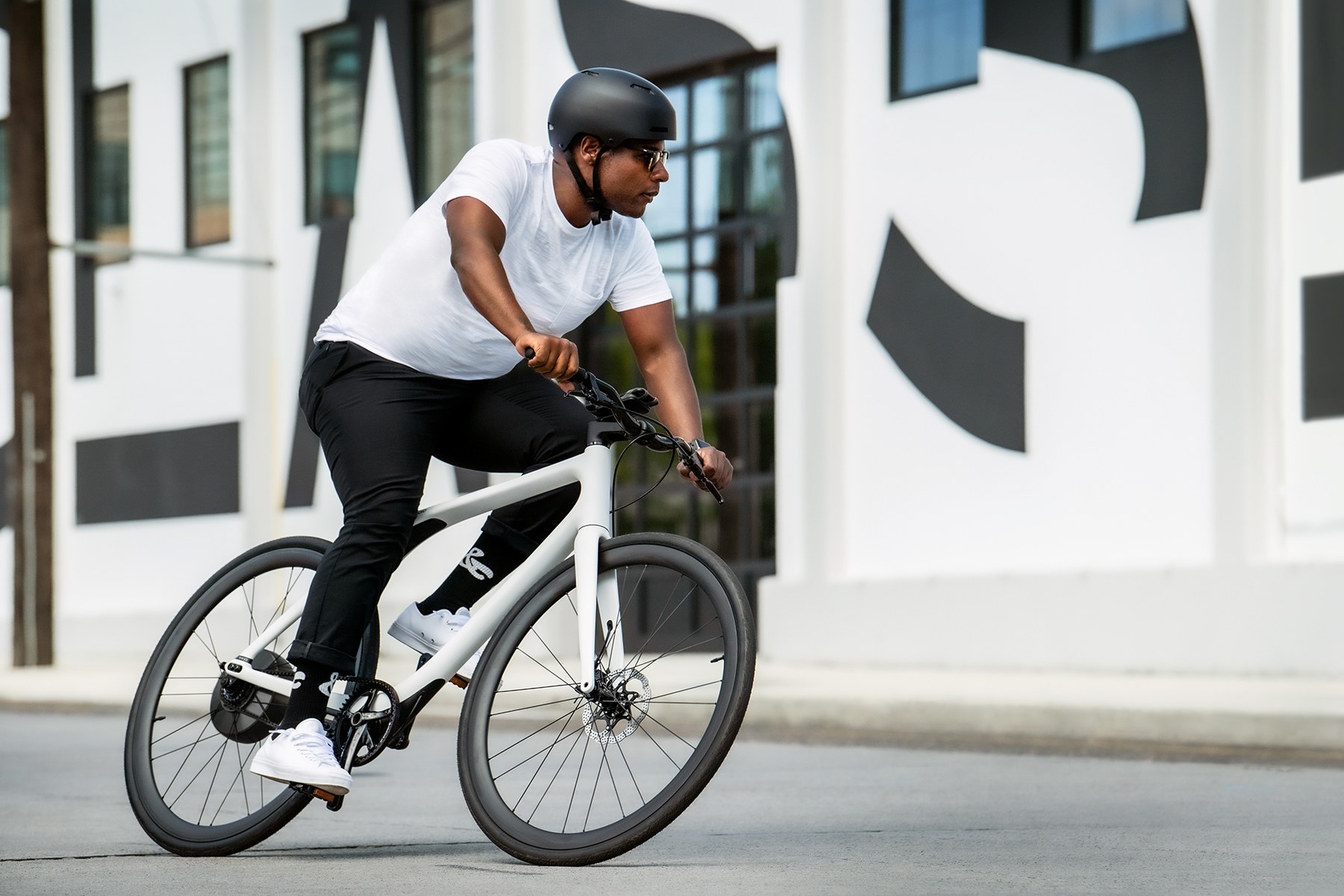 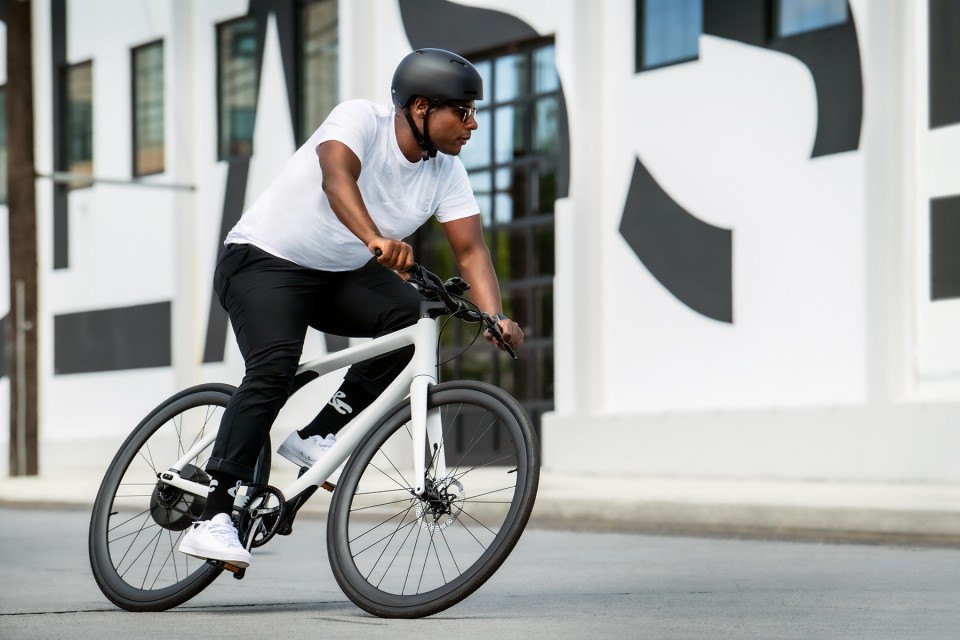 If you fancy a bicycle with a pedal-assist motor, there are plenty of options. Traditional bike brands including Specialized, Trek and Cannondale compete in the space alongside younger, more design and technology-focused brands such as VanMoof, Cowboy and Gocycle. Is the market oversaturated? Gogoro doesn’t think so. The Taiwanese company, best known for its colourful electric scooters, is unveiling its first e-bike today. It’s called the Eeyo 1 and, unsurprisingly, is part of a new Eeyo sub-brand that will be used for all of its future pedal-powered efforts.

Gogoro says its designers have prioritized “agility over utility.” That’s a fancy way of saying that the riding experience — and putting a smile on your face — is a higher priority than range or allowing you to transport your children or weekly groceries.

The Eeyo 1, therefore, is a lightweight steed designed for the city. The standard model weighs just 27.5 pounds (roughly 12KG), which is lighter than every e-bike I’ve reviewed to date, including the VanMoof S3 and fast-folding Gocycle GXi. It’s not the lightest ever created — the folding Hummingbird is only 23 pounds, for instance — but it trumps the vast majority of e-bikes on the market, and should be comparable with many entry-level road racers.

“It’s designed to bring forth the joy of riding,” Horace Luke, CEO of Gogoro told Engadget. “While other e-bikes look to solve utilitarian challenges, what we wanted to do was bring the fun and excitement into the ride. I gave the team a very simple thesis: I said, ‘give me a bike that makes me feel like I’m 18 again.’”

The weight can be partly attributed to the carbon fibre frame, which doesn’t have a conventional seat tube connecting the saddle to the bottom bracket. The “open-frame” design means that you can easily stick an arm through and carry the bike over your shoulder. The company hopes this will appeal to people who live on the upper floors of an apartment complex, or would like to carry their bike down into a subway station.

That’s important because you can’t remove the battery (not easily, anyway). Gogoro has packed all of the bike’s electric components — including the 250W motor, 123Wh battery and all of the sensors required to monitor your speed and effort — inside the rear hub. The so-called Smartwheel is a self-contained system that can be developed and easily ported to future Eeyo bikes.  In theory, it should mean that customers only have to send off the back wheel, rather than the entire bike, if they encounter any electrical problems.

According to the Gogoro team, the Smartwheel is also more efficient than most e-bikes that use a trustworthy but off-the-shelf Bosch system in-between the pedals. “Most mid-drive systems are somewhere around 50nm (of torque),” a company spokesperson explained. “If we measure ours in force, at the motor, we’re equivalent to 50nm, even though we’re only a 20nm motor.”

You can think of it like the adaptable ‘platform’ that so many electric car companies are keen to develop and license to rival manufacturers. Gogoro has taken a similar route with its core business, working with companies like Yamaha to build electric ‘Powered By Gogoro Network’ scooters. “[We will] work with other bike manufacturers and brands to accelerate their path to market by helping them quickly integrate Eeyo Smartwheel into a range of new e-bikes,” the company teased in a press release today.

The bike doesn’t have a power button or integrated computer in the top tube or handlebars. To use the Eeyo 1, therefore, you’ll need to download a companion app. Gogoro says it will support Bluetooth proximity, which means the bike will automatically unlock as you approach and, conversely, arm itself when you walk away. When the Eeyo 1 is ‘locked,’ the motor will deactivate and generally make it difficult for a would-be thief. “You can still push it around a little bit, but if you try to ride it, you’ll feel like you’re riding up a very, very steep hill,” Luke said. There’s little to stop them lifting the bike up and into the back of a truck, though, so you’ll probably want a conventional lock if you intend to leave it outside a store.

If you like to check your speed and charge while riding, fear not: Gogoro will also be offering some kind of mount so you can attach a smartphone and reference the Eeyo app for this sort of information.

The e-bike will offer two riding moods, Sport and Eco, that prioritizes power and range respectively. Regardless, the Eeyo’s top speed will be capped at 20MPH in the US and 15.5MPH in Europe. (These restrictions are set by local regulators and are pretty standard for the industry.) The bike’s acceleration and general level of assistance will increase in Sport mode, however. The Eeyo 1’s range, meanwhile, should fall somewhere between 40 and 55 miles (roughly 89 KM) on a single charge, depending on your preferred riding mode, the number of hills you typically climb each day, and a bunch of other factors such as your body weight and pedalling cadence.

That’s not the highest range I’ve ever seen, but Gogoro believes it should be enough for most city dwellers. To charge the battery, you’ll need to clip a horseshoe-shaped connector to the back wheel or slot the entire bike into an optional stand. And, because the battery is part of the rear hub, it’s impossible to perform a hot swap similar to Gogoro’s electric scooters.

The standard Eeyo 1, available in Cloud Blue and Lobster Orange, will set you back $3,899, which is more expensive than the Cowboy and VanMoof’s S3 range. Gogoro will also be selling a special 1s model in Warm White that couples the ultra-light frame with a carbon fibre seat post, handlebar and wheel rims. It will cost you $4,599, but in return you get an e-bike that weighs just 26.4 pounds (roughly 12KG). Both models are undoubtedly expensive. In the current e-bike market, though — where top-end Riese & Müller models cost $8,000 — the prices aren’t surprising.

“Sure, we could have made a much more affordable  bike, but that wasn’t our interest,” Luke said. “We wanted to make something that was out of this world.” Gogoro is keen to stress, too, that other e-bikes at potentially cheaper price points will follow. “We will bring out bikes in the future, as well as other bike makers [using the Smartwheel],” Jason Gordon, vice president of Gogoro added. “This is not meant to be a one trick pony. This is meant to be the start of something bigger, and a Gogoro commitment to a new micro-mobility category that we haven’t gone into before.”

The Eeyo 1 and 1s will be available in the US and Taiwan from July, before being sold in Europe “this summer.”

It’s a bold move for Gogoro. Until now, the company has focused almost exclusively on its domestic market of Taiwan. The company has worked with shared rental services in France and Germany, and offers its scooters to delivery companies in South Korea, too. Gogoro has never had a meaningful business in Europe and the US, though. With the Eeyo 1, that’s all about to change. To be successful, though, it’ll have to convince new and veteran cyclists alike that its e-bike vision is better than the competition.

In this article: gogoro, eeyo, electric bike, E-Bike, Electric bicycle, transportation, news, gear
All products recommended by Engadget are selected by our editorial team, independent of our parent company. Some of our stories include affiliate links. If you buy something through one of these links, we may earn an affiliate commission.