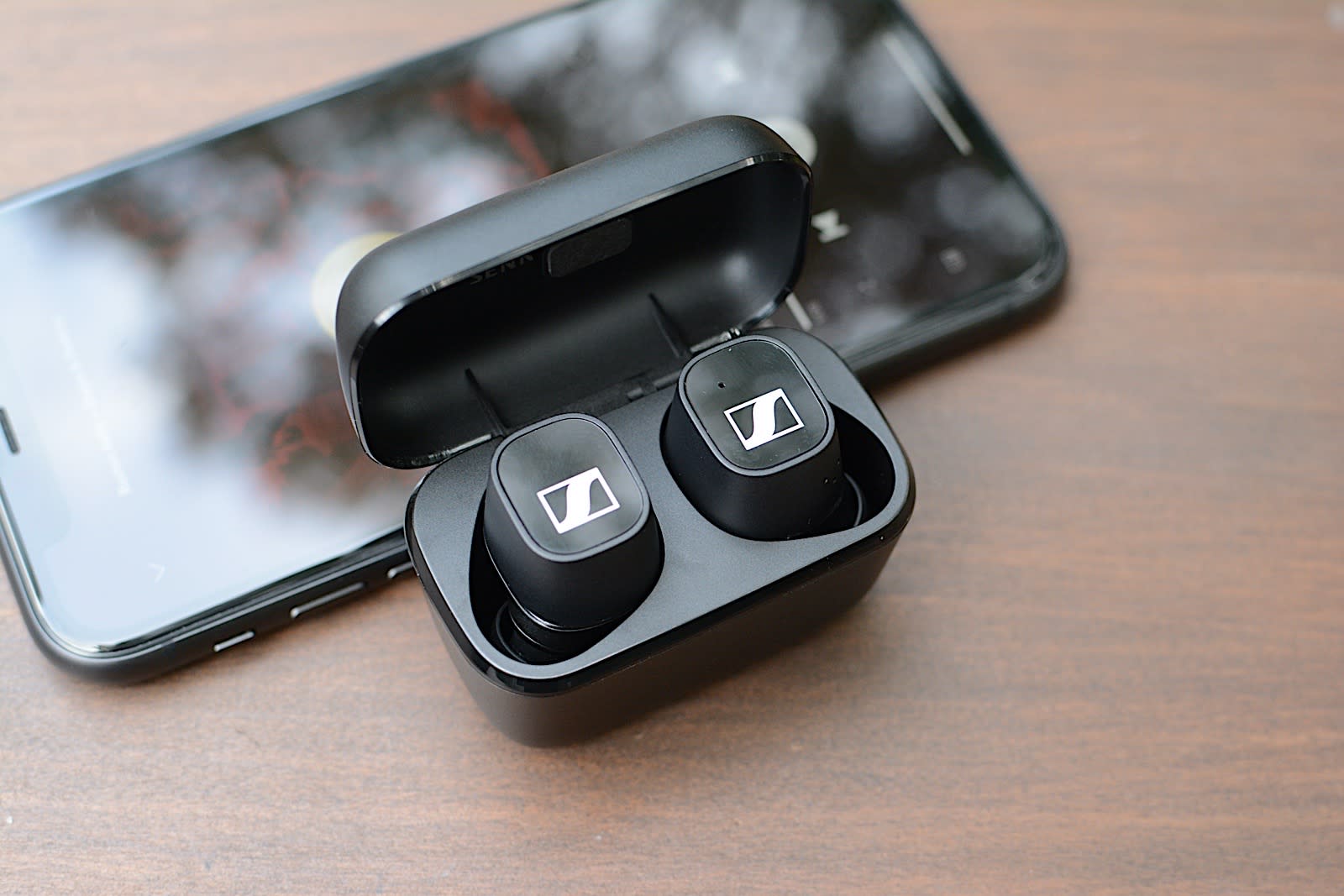 At $199.95, they’re not a bargain. But they are the company’s most affordable option.

Unlike a lot of headphone companies, Sennheiser has taken a more measured approach to true wireless earbuds. Thus far, it has only introduced two models, with the second being an improved version of the first. Both of those Momentum True Wireless sets were flagship units though, and they commanded a premium price ($299.95). Now Sennheiser returns with the CX 400BT: earbuds with a less flashy name, at a more affordable $199.95. And thankfully, they retain some of what made the Momentum True Wireless 2 so good.

First, the CX 400BT have a different design than the Momentum True Wireless 2 (MTW 2).  Where the latter had a more circular shape to the touch panel, the former is more of a rounded rectangle. The MTW 2 also had a more premium look with its etched silver surface for the on-board controls. The CX 400BT controls are simply glossy black. Overall, both models are roughly the same size, which means this new option will still protrude out of your ears a bit.

The cases for the two models are vastly different. The CX 400BT’s is noticeably smaller, albeit slightly taller, and lacks the tactile cloth cover from the Momentum line. The charging case with the new model feels cheaper too, especially when you notice how thin the lid is. Like previous Sennheiser models, a charging and battery indicator light is around back, next to the USB-C jack and the battery status button.

Like the MTW 2, you can customize the on-board controls for the CX 400BT inside Sennheiser’s Smart Control app. Where the company differs from a lot of the competition is that it allows you to reassign almost all of the actions on both earbuds Volume controls and an optional power on/off selection are only available for press-and-hold, but single tap, double tap and triple tap are fair game for any combo of track controls and voice assistant activation you desire. On most earbuds, you can choose between a group of three functions for one particular gesture. However, Sennheiser lets you rebuild the touch controls almost from scratch if you don’t like what’s there by default.

Out of the box, the triple tap is unassigned. If you wanted to leave everything else as is, you can use that action for your voice assistant. The company also offers the ability to restore the default controls with a single tap if you end up hating what you’ve done. What’s more, you can disable the touch controls entirely if you need to.

As is the case with other Sennheiser headphones, the Smart Control app offers custom EQ options. The abstract curve that you can swipe around to adjust the tuning is still available, but there’s also a more intuitive slider option as well. Once you get a preset you like, you can name and save it in the app. Sennheiser warns that applying custom EQ profiles will impact battery life of the CX 400BT, but in my experience, the effect is minimal.

Sennheiser says the CX 400BT has the same “acoustical system” as the Momentum True Wireless 2. That includes the 7mm “dynamic drivers” the company used in the pricier model. The sound quality is quite good on this new set of earbuds. There’s outstanding clarity in the details of most genres and a deep, warm sound stage that is simply a joy to listen to. At times, the mids can get a little muddy, but overall these are a great option for anyone who is primarily concerned about audio performance.

With PVRIS’s Use Me, the CX 400BT captures the deep droning bass of the drum machines and synths in a way some earbuds I’ve tested can’t. Sennheiser’s ability to build true wireless earbuds that offer such detail is what sets it apart from the competition. That’s true of the electro-rock grunge of PVRIS, the raucous bass lines of Run The Jewels and the acoustic alt country of Ruston Kelly. Across different musical styles, the CX 400BT creates clear layers of vocals and intricate instrumentation. It’s like putting on your favorite hoodie -- you just want to sit and enjoy things for a while.

One key difference between the MTW 2 and the CX 400BT is active noise cancellation (ANC). This new and more affordable model only offers passive noise isolation. That doesn’t have an impact on overall audio quality, but it does make a difference when it comes to quieting distractions. Thankfully, the isolation is quite good on the CX 400BT, and I was only jerked back into reality between songs when I caught a few seconds of Puppy Dog Pals or my son’s virtual elementary school lesson. The CX 400BT doesn’t have an ambient sound mode either, which could be more of a dealbreaker for some than the lack of ANC.

Unlike a lot of the competition, Sennheiser didn’t go out of its way to hype the call quality on the CX 400BT. But you can certainly use them for your phone or video chats. My wife, who I usually call to test earbuds, said these sounded slightly better than if I was on speakerphone. That’s actually an improvement over some devices. She noticed background noise only cut through occasionally, but overall, the audio quality for calls was still decent at best with the CX 400BT.

It’s also worth mentioning that the CX 400BT doesn’t connect both buds to your device independently. The right earbud is the “master” and connects to the left. So if you want to use a single bud for a call or any other reason, it will have to be in your right ear. While this used to be the norm, independent connections are becoming the standard. Honestly, that’s not a huge deal for me, but I’m right handed. I can understand why someone who’s left-handed would prefer the ability to use either side.

Sennheiser promises seven hours of battery life on the earbuds themselves, with another 13 hours in the charging case. While companies like Audio-Technica offer over 10 hours on a single charge, I’ll be honest: seven hours is plenty of time. More often than not, I dock earbuds in the case after an hour or two. Very rarely am I using something like this continuously for 4+ hours. That being said, I managed six hours and 45 minutes out of the CX 400BT before I had to tuck them away. During that time, I was making tweaks to the settings in the app and swapping connected devices. So I’d bet under “normal” use, I could easily hit the stated time figures.

In the $150-$200 range, Sennheiser has a lot of competition. As true wireless earbuds have evolved, companies have been keen on packing as many features as they can into smaller and more affordable designs. One of my favorites is the Jabra Elite 75t. At $180 (currently on sale for $150), they’re a vastly improved follow up to the already impressive Elite 65t. They’re smaller, lighter, more comfortable and sound better than the previous model. Still no ANC, but they do have a HearThrough mode for letting ambient sound in and several customizable settings. I also really like the Galaxy Buds+ at $150 (currently on sale for $130). Samsung made sure to offer iOS users most of the same features it gave Galaxy and Android owners the first time around. These earbuds are also tiny, which makes them comfy -- especially when you wear them for longer periods of time.

In the end, I’m conflicted about the CX 400BT. On one hand, Sennheiser managed to pack the sound quality from its flagship MTW 2 in a set of earbuds that’s $100 less. The only real sacrifices are in design (which doesn’t make a huge difference in actual performance) and the lack of noise cancellation. On the other, the CX 400BT would be a much more attractive proposition if they were just $20 cheaper. As it stands, you’ve got premium sound in true wireless earbuds that are otherwise mid-range at best. Still, if sound quality is your top priority, and you aren’t willing to spend big, these are certainly worth a look.

All products recommended by Engadget are selected by our editorial team, independent of our parent company. Some of our stories include affiliate links. If you buy something through one of these links, we may earn an affiliate commission. All prices are correct at the time of publishing.
View All Comments
Sennheiser CX 400BT review: Great-sounding mid-range wireless earbuds