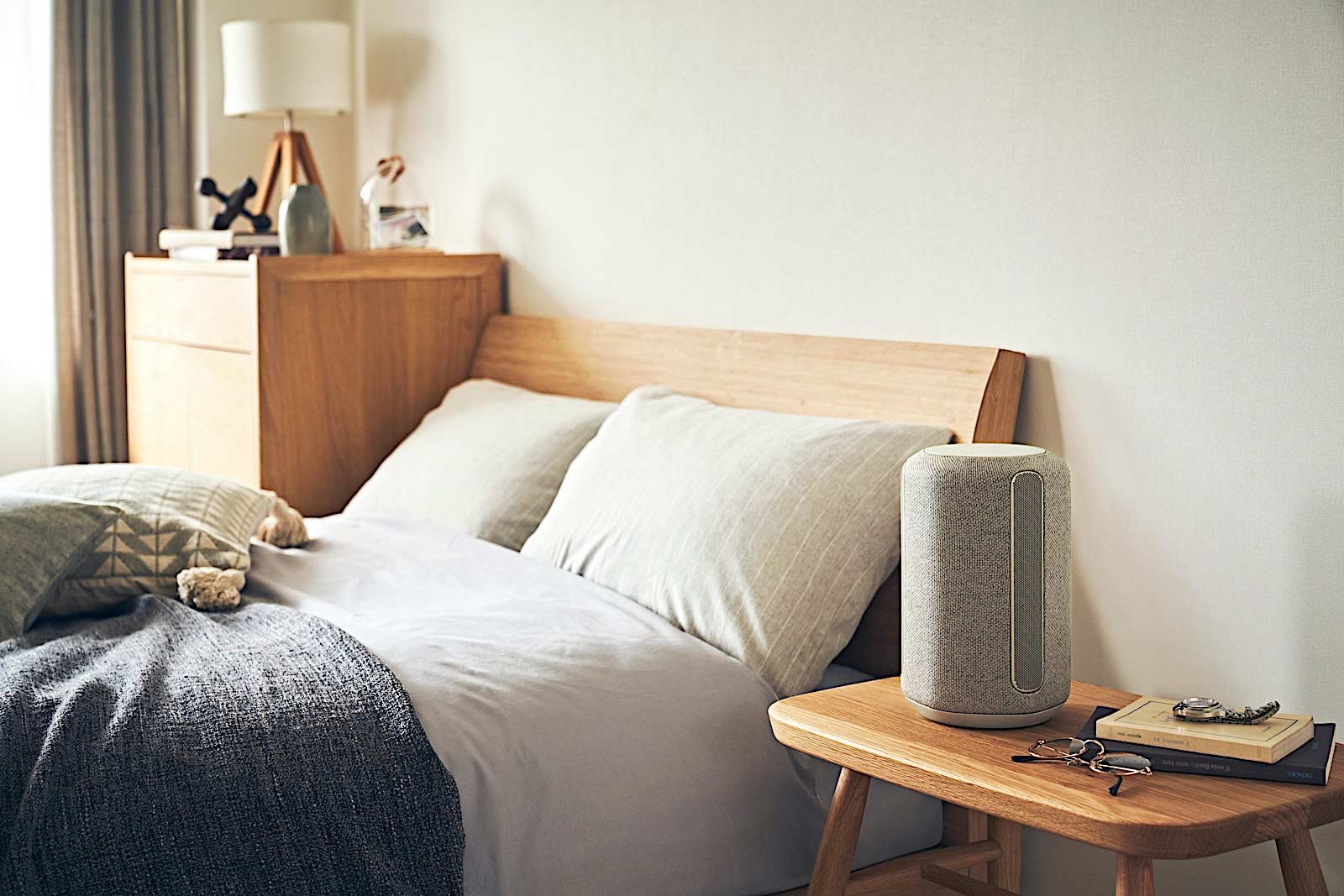 At CES 2019, Sony had a glass room in its massive trade show booth. In the middle of the space was a small table with a single speaker resting on top. At first glance, I could tell the device had multiple drivers, as three were clearly visible from the top. What came next was my first demonstration of Sony’s 360 Reality Audio -- immersive, room-filling sound from a single speaker. Two years later, the company introduced that unit as the SRS-RA5000: one of two Sony connected speakers that will support the immersive 360 Reality Audio platform it has been preaching since that CES.

That same January event was Sony’s introduction of 360 Reality Audio. At the time, the concept seemed like the kind of thing frequently seen at CES. It’s an idea that sounds great, but never actually becomes a thing. If you haven’t been following along, here’s a brief summary. The company has developed its take on spatial audio for music. Sony’s platform allows producers and recording studios to split up individual tracks or stems, placing them on a 360-degree sphere “around” the listener. Drums can be placed behind you, for example, with vocals overhead and individual guitars positioned on left and right sides. The entire idea is to make music sound like you’re there, whether that’s in the studio or, as Sony announced last week, at a live performance.

“[It’s] different from the current two-channel or stereo sound,” Sony Home Entertainment and Sound Products general manager Shinji Okazaki explained. “Other formats targeting an immersive home theater experience normally use the so-called northern part of the sphere. But we use the entire 360 sphere to realize the whole immersive music.”

But let’s head back to CES 2019. When 360 Reality Audio was first introduced, Sony demonstrated it on a prototype of the SRS-RA5000 along with a tightly controlled headphone demo. In a curtained-off room at the back of its CES booth, the company’s staff positioned delicate wires in your ears before placing a set of studio-grade headphones on your head. Again, this setup allowed you to experience just what this platform was capable of -- it was truly incredible -- but getting it in the hands of consumers felt a bit far-fetched at the time. That’s mostly because the headphone demo seemed so meticulously planned, and included a calibration process before you could listen, the thought of putting some form of this in a smartphone app seemed like a dream.

The company added a calibration feature to its Headphones app in the fall of 2019. With this tool, Sony says the software can adjust settings after you snap some photos of your ears. My experience with this has produced subtle differences from the default 360 Reality Audio sound, but that’s okay. The platform on its own is certainly more immersive than standard stereo tracks.

“Everybody has different hearing characteristics for listening to music on headphones,” Okazaki said. “How they listen relates deeply to the shape of the ear, so we have developed the app that recognizes the best hearing characteristics.” Without giving specific figures, he explained that use of the customization feature has increased 10 fold since launch.

By October 2019, Sony was ready to launch. Unfortunately, it did so with a tiny library of content: The company only mustered 1,000 songs at the time. Plus, it didn’t have any speakers of its own that supported 360 Reality Audio The new platform it was trying to evangelize the masses about was only available on its headphones -- like the then-flagship WH-1000XM3. You also needed a high-res streaming subscription from Amazon, Tidal or Deezer in order to get access in the first place.

Those services didn’t wait around for more immersive tracks. Since Dolby is also doing something similar with Dolby Atmos Music, those pricey streaming tiers also grant you access to its take on immersive tunes. Obviously, this means you have more songs to choose from, though Dolby’s library is limited too. On the hardware front, Amazon’s Echo Studio was the first speaker to support 360 Reality Audio (it also supports Dolby Atmos Music). Debuting in late 2019, the Alexa-enabled voice-controlled speaker offered a taste of what Sony had been working on -- one that you could experience in your home.

At CES last year, it seemed like Sony was still trying to make 360 Reality Audio a thing. The company had more demos, including a living room setup with a soundbar and another prototype speaker. The latter would end up being the SRS-RA3000: the second speaker Sony introduced last week and plans to ship this spring. Once again, the company had built compelling demos, but it didn’t seem to have a clear plan to get its immersive sound to the ears of the masses.

After being largely silent on the project for a year, Sony revealed its strategy just ahead of CES 2021. The company clearly realizes the limited content selection is an issue (still just 4,000 tracks at this point), so it's offering tools to creators and producers so they can easily add 360 Reality Audio to their workflows. Sony worked with Virtual Sonics to build the 360 Reality Audio Creative Suite, a software plug-in that works with existing digital audio workstation (DAW) applications like Pro Tools. That add-on should be available for use later this month. Dolby is also trying to expand by opening up a bit, giving indie artists access to tools and distribution through a partnership with Pro Tools developer Avid. Both companies are doing so in the name of expanding their music library to make the extra investments more compelling.

“As long as there are stems available, or as long as we have multitrack recordings, we can then mix those,” explained Jun Makino, senior manager for Sony Home Entertainment and Sound Products. “The mixing process does require the artist’s creativity and intent, so that does require some discussions.”

Sony Music Entertainment is the parent company for major record labels like RCA, Columbia and Epic. Those labels are home to Travis Scott, Doja Cat, Harry Styles and many more big-name acts. In other words, Sony has an in-road with artists and producers making a large portion of new music these days -- because it owns several big labels. The company has also expanded the number of studios that are equipped for capturing 360 Reality Audio for new recordings. After starting in New York, it now offers capable setups in LA and Nashville, as well as in Germany, the UK and Japan.

Sony isn’t just trying to add more 360 Reality Audio content with studio recordings either. After all, the entire idea is to put you inside the music, so adding live performances -- or at least archived, on-demand concerts -- to the pool makes a lot of sense. The company kicked off this push with a concert from Zara Larsson this week through the Artist Connection app. As COVID-19 rages on, Sony hopes this will provide a substitute for in-person attendance, since there’s no telling when we’ll be able to return to arenas and other venues. For now, the company is focused on capturing live performances for on-demand viewing and listening, but using the audio format for livestreams and concerts is certainly possible in the future.

“We have been developing real-time 360 Reality Audio,” Okazaki noted. “It's going to be available later.” Makino was quick to remind me that many “livestreams” that we’re all watching from home are actually pre-recorded, but also reiterated that applying the platform to real-time sound is something Sony wants to do.

The company’s new speakers, the SRS-RA5000 and SRS-RA3000, are equipped with an algorithm that converts stereo tracks to something akin to 360 Reality Audio. The pitch being that you aren’t forced to settle for mediocre experience, even with the limited library at the moment. Of course, this is something we’ll have to test during a review in order to gauge its merits.

The last piece of Sony’s plan involves other phone and audio device makers. The company plans to license its headphone personalization technology, the feature from its own Headphones app, to other manufacturers. Sony also intends to offer tech that will allow 360 Reality Audio to be played from a smartphone or inside cars. And, perhaps most importantly, it plans to work with other speaker companies on new models that can adequately showcase the platform.

“We are now expanding the [number of] speakers with other manufacturers,” Okazaki said. He further explained that, so long as the hardware is equipped with at least four drivers, it can probably handle the immersive audio format. The Echo Studio, for example, has five directional speakers inside. For headphones, there are no specific specifications, but Okazaki explained that the company does need to check “the quality of the sound and the sound field one by one.”

After two years of demos and a launch limited by the constraints of an entirely new platform, Sony appears to be ramping up to take 360 Reality Audio mainstream. It will still face an uphill climb convincing consumers that the investment in new hardware and a more expensive monthly streaming subscription is worth it. That’s the challenge with any new platform though, and Sony is finally starting to build a compelling case.

All products recommended by Engadget are selected by our editorial team, independent of our parent company. Some of our stories include affiliate links. If you buy something through one of these links, we may earn an affiliate commission. All prices are correct at the time of publishing.
View All Comments
Two years in, Sony wants to bring 360 Reality Audio to the masses