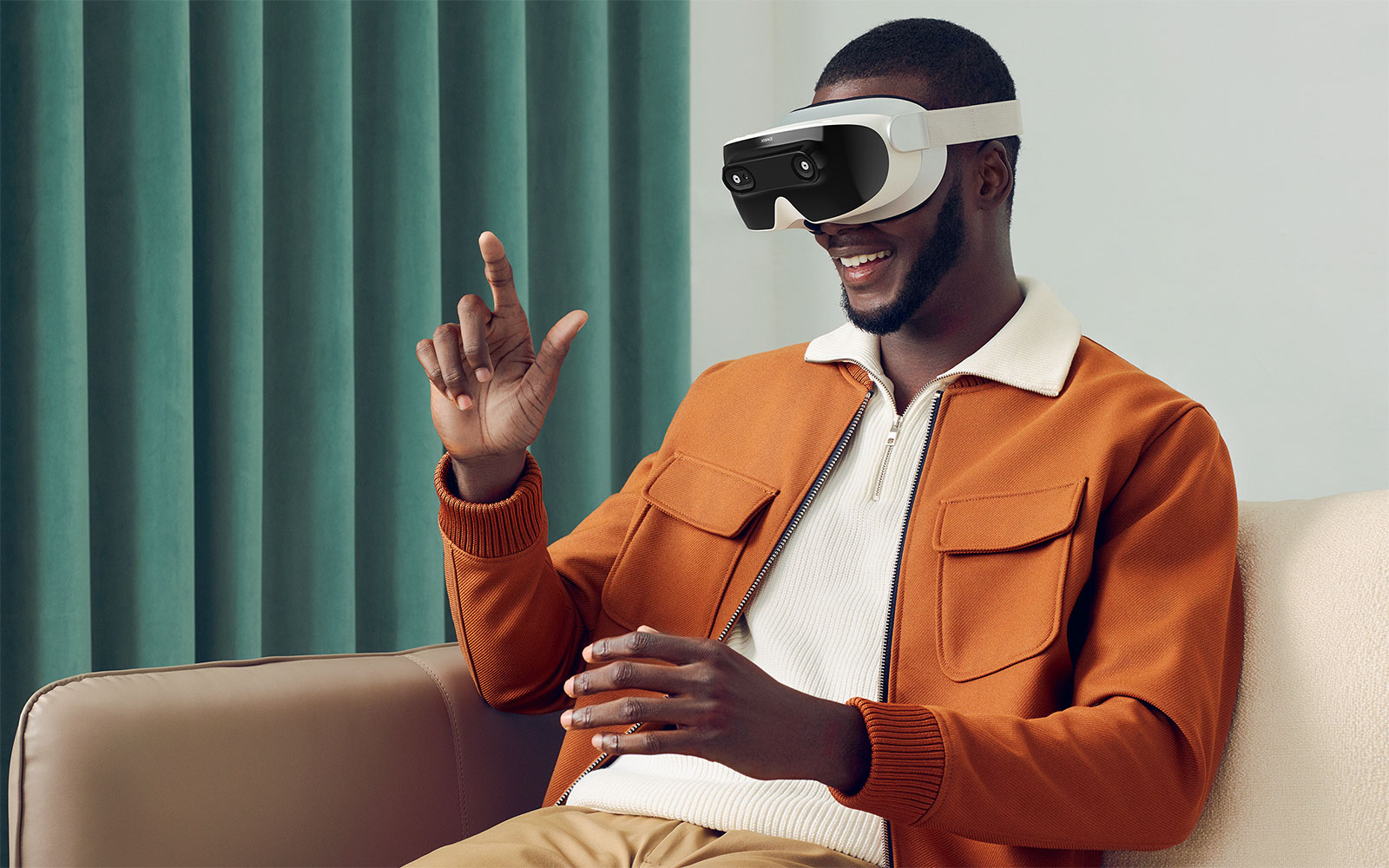 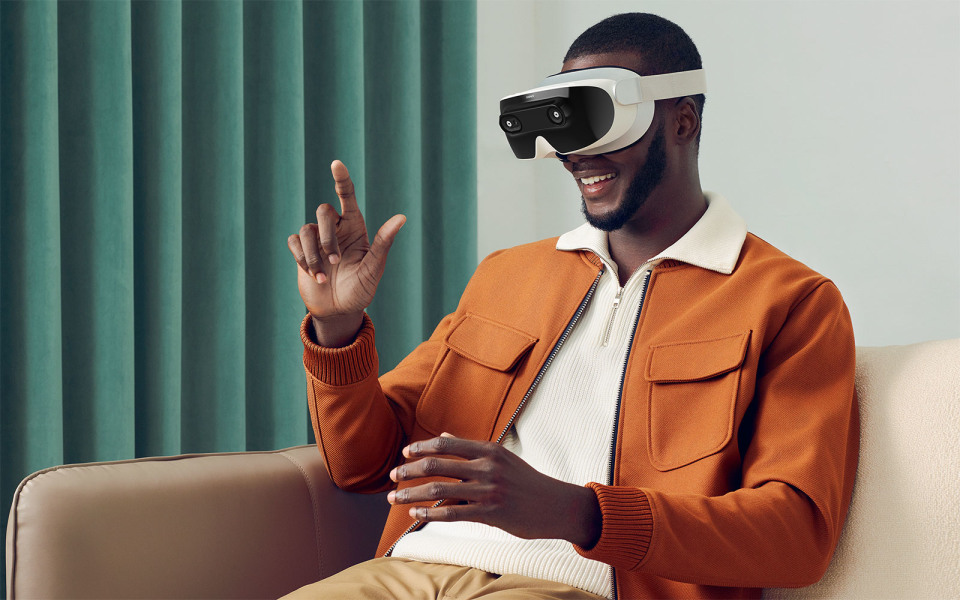 Even though Peter Chou had long parted ways with the VR business he created at HTC, the former CEO continued to work in the industry, which has included forays into a visual effects studio and a VR game studio. But what the exec kept tight-lipped about over the past three years was a project called XRSpace, a startup that claims it will revolutionize the current “gimmicky,” “lonely” and “complicated” VR experience. The result is a new VR headset aimed at regular consumers with intuitiveness and a social-first approach.

It’s dubbed the XRSpace Mova which, according to Chou, is apparently the “smallest, lightest” standalone VR — or “XR,” as the exec prefers — headset in the market. It’s also the first to come in a 5G flavor. From afar, the Mova looks like a pair of ski goggles with protruding stereo cameras at the front, and when placed side by side, this headset looks roughly half the size of HTC’s Vive Focus. The Mova weighs 470 grams, which is notably less than the Oculus Quest (571g) and the Focus (695g). Indeed, the prototype I wore back in February was surprisingly light and compact, but that’s as far as I’m allowed to talk about in terms of experience.

The Mova is powered by Qualcomm’s Snapdragon 845 chipset (instead of the 835 as used by the Focus and the Quest), 6GB of RAM (instead of the usual 4GB) and a 4,600mAh battery (the Quest has 3,648mAh). XRSpace didn’t specify the nature of the 2,880 x 1,440 display panel nor its field of view, but we do know that it has a slick 90Hz refresh rate and a whopping 702 dpi pixel density, both of which are much higher than its rivals, and due to using a smaller display panel. Questions remain, however, for when we get to try the device: would you prefer higher pixel density or a larger view?

The Mova will ship with a single controller for gaming purposes, but it’s designed to be used with hand tracking as the primary control method. This, in theory, would lower the learning barrier for most people, and they would probably use the headset more often because of its less fiddly nature. But the company wants hand gestures to be a core interaction in its virtual world, Manova. And this is where things get different from VR headsets that we’ve seen already.

Once you’re inside one of the Manova spaces (more on that later), you can toggle most common social gestures with natural movements: you can shake hands with other avatars, give high fives, do fist bumps or toast with a glass. You can even grab and throw objects, meaning you can shoot hoops or throw darts with your buddies who are actually miles away in real life. There’s also a gesture for teleportation: tap in the air with your index finger to toggle an arrow, then point at your desired spot and tap again to teleport.

Since the Mova is a 6DoF VR headset, you can walk around physically as you do virtually. The biggest surprise here is that the inside-out cameras here can apparently just about track your legs, so you’re able to play simple soccer games with others in VR as well. It sounds intriguing, but I’ll wait to see how this fares once I’ve tried the headset properly.

For the same reason, XRSpace lets you put on a full-body avatar by default, as opposed to making do with floating half-body versions like some VR social platforms do.

Avatar features are easily written off as gimmicks, but Chou believes it’s core to making VR work when it comes to social interactions.

“Today, one of the reasons why VR is not that exciting, is not getting that level of immersiveness, is that it's lacking very good digital avatars,” the exec reasoned. “Today, most of the digital avatars are cartoonish and half body, really not something that we can call your ‘digital self.’ So what we really want to do is to let people really actually recognize this is you.”

Chou hopes that users would then stick to the same “digital self” when meeting with families and friends, or when joining meetings and lessons. But of course, there’s no stopping you from making your avatar look bizarre for the more casual applications. “We don't prohibit that.”

Rather than relying on an existing VR platform like Viveport or Steam, XRSpace has bigger ambitions when it comes to content and services. The main foundation of that is Manova, which is basically XRSpace’s take on VR social platforms like VRChat or Rec Room. This hub is also your headset’s main interface.

With private spaces, you can meet up with family, friends or acquaintances in your virtual home, meeting room, classroom, cinema or even private beach. You’ll obviously be able to watch videos, play mini-games, or fiddle with virtual objects together in those scenarios.

If you want to make things a bit more realistic, the Mova headset offers a feature called “Space Scanning” which, as you can probably tell by the name, can scan a physical room and turn it into a virtual space. In a quick video I saw, the user would simply walk around a room and let the headset’s front optical sensors do the work. I couldn’t tell what the scan quality was like, but apparently you’ll able to redecorate this virtual room before inviting people over.

To bolster this ambitious feature pitch, the startup has already secured one of Taiwan’s largest real estate agencies, YC House, to launch VR house-viewing tours in Q3. XRSpace is also working with furniture retailers and travel agencies to take advantage of this feature, so that customers can preview their purchases or destinations before making the jump.

XRSpace is also working on bringing VR education and VR collaboration to institutions and companies. In Taiwan, there are already at least four institutes on board to integrate Manova for remote learning. Similarly, XRSpace claims that its bank customers are also interested in using Mova as a remote meeting and training solution.

Things get a lot more interesting when you head out to public spaces. You start from a city center which acts as a hub, from there you can head to parks, beaches, night clubs and cinemas, in which you can hang out with friends or meet people from around the world.

Then you have MagicLOHAS, which is essentially a suite of wellness activities that you can participate with other people in VR. There’s yoga, tai chi, meditation, dancing, stretching and even brain training, all of which can take place on top of a mountain, by the sea or in the woods. XRSpace tapped a handful of wellness experts to add virtual instructors to each activity, but users will have to wear body trackers — sold separately — to leverage this service.

The remaining public spaces are basically portals to music, VR videos and VR games. The music part will be handled by carriers, whereas videos will come from partners like AirPano, Insta360, Digital Domain and various local content partners. In Taiwan’s case, Vogue and GQ are already on board, and XRSpace is also working with a local baseball team to integrate live signal into Manova’s virtual stadium.

As for VR games, the notable ones include Resolution Games’ Angry Birds VR and fishing game Bait!, along with Futuretown’s mini-golfing game Cloudlands 2 and shooting game A-10 VR. It’s unclear how many of these titles will be compatible with the headset’s hand gesture input, though, and it’ll need to convince many more game developers to pick up its SDK — available today — in order to catch up with the competition in this space. Meanwhile, Oculus is already adding gesture-based games to the Quest’s library later this week.

XRSpace’s Mova is a hugely ambitious VR headset, at a time when the sector has struggled to truly breakthrough to the mainstream. And that’s before the list price of $599. While the ideas are unique, it’ll need to work extra hard to tempt regular consumers. XRSpace is hoping that carriers will help them out. For Taiwan, XRSpace is launching its headset with Chunghwa Telecom, whereas in the West, Deutsche Telekom will be bringing the Mova to Europe in the near future. We’ll be keeping an eye out on US availability and a chance to properly experience the device.

Update 5/27/20 10:20PM ET: The 5G nerds have been wondering how come the XRSpace Mova can have both Snapdragon 845 and 5G radio (Qualcomm only started 5G support for the Snapdragon 855 and beyond), so I asked Peter Chou, and he explained that there's actually a modem slot in the VR headset, which lets them easily add a 4G or 5G data card.

In this article: resolution games, angry birds, xrspace, peter chou, mova, xr, magiclohas, digital domain, futuretown, vr, manova, snapdragon 845, news, gear
All products recommended by Engadget are selected by our editorial team, independent of our parent company. Some of our stories include affiliate links. If you buy something through one of these links, we may earn an affiliate commission.