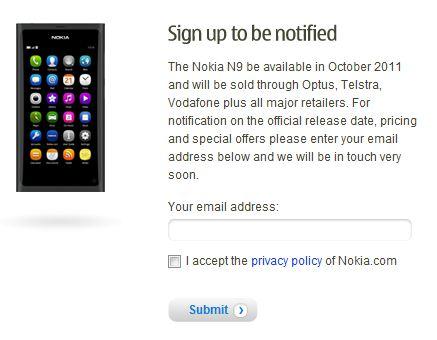 The Nokia N9 will be considered a rarity in the US, UK and Germany when it's released, but at least fans Down Under won't have to look very far to get their hands on one. Espoo's officially announced its intention of selling the MeeGo device on Telstra, Optus and Vodafone, in addition to distributing it through several major retailers. Look for the one-of-a-kind handset to make its way to Australia in October for roughly $850; those who opt for the 16GB model will be able to choose from black, blue and pink, whereas the 64GB version will only be made available in black. Full presser can be found below.
Show full PR text
Nokia N9 "all-screen" smartphone available through all Australian operators and major retailers

Sydney, Australia – 1 September 2011. The Nokia N9, which was announced in Australia at the end of June, will be sold through Optus, Telstra, Vodafone and all major retailers[1].

The stunning high-end smartphone, which will be available in October 2011, will come in black, blue and pink with a RRP AUD$799.

Gavin Williams, marketing director, Optus Consumer said, "Optus has had a very strong relationship with Nokia over a number of years and we're excited to continue this with the Nokia N9. Our customers have shown a lot of loyalty to Nokia as a brand and manufacturer of quality products in the past and we expect that to continue with this highly impressive smartphone device."

"It's clear that Nokia fans have something quite special to look forward to in the Nokia N9," said Andrew Volard, director, Telstra Mobile Products. "It's fast, simple to navigate and features a beautiful design that sets the N9 apart in a crowded smarpthone market. We're looking forward to making it available to our customers on Australia's largest and fastest national mobile network."

"The Nokia N9 is where form meets function- this is a sleek, stylish and highly intuitive smartphone, offering customers a device that looks as good as it feels," said Ross Parker, general manager of Devices and Pricing at Vodafone. "The N9 will be Nokia's flagship device for 2011 with good reason, and we are thrilled to be delivering the N9 to our customers on Australia's best value mobile plan range, Vodafone Infinite."

The Nokia N9 is all about design and simplicity. It features a 3.9-inch AMOLED panel with a ClearBlack display, which makes the dark bits darker and the colours much more vivid.

The casing is made from material commonly used in ice hockey helmets and the paint is bled right through the material so the colour remains even if you scratch it. The material also allows for a superior antenna performance which means better reception, better voice quality, fewer dropped calls and a higher GPS accuracy.

The Nokia N9 "all-screen" design means there is no physical home button. Instead, it has touch and swipe gestures which lets you navigate around the homescreen.

The user interface is designed around the things people typically do the most – use apps, socialise and multitask. There are three homescreens, which are arranged in a carousel. The first homescreen is for accessing your apps; the second for social networking, calling, texting and calendar; and the final screen shows which applications are open. The screen can be pinched or zoomed to show either four or nine open app icons.

The Nokia N9 also comes with an 8-megapixel autofocus camera with Carl Zeiss optics, wide-angle lens, HD video capture and large lens aperture for greater performance even in lowlight conditions. It is also NFC-enabled, which allows the user to share images and videos between devices by simply touching them together.

Rounding the package is Nokia's free turn-by-turn drive and walk navigation with voice guidance and Nokia Store, which gives you access to the apps you need.
In this article: australia, meego, mobilepostmini, n9, nokia, nokia n9, NokiaN9, optus, signup, telstra, vodafone, vodafone australia, VodafoneAustralia
All products recommended by Engadget are selected by our editorial team, independent of our parent company. Some of our stories include affiliate links. If you buy something through one of these links, we may earn an affiliate commission.
Share
Tweet
Share