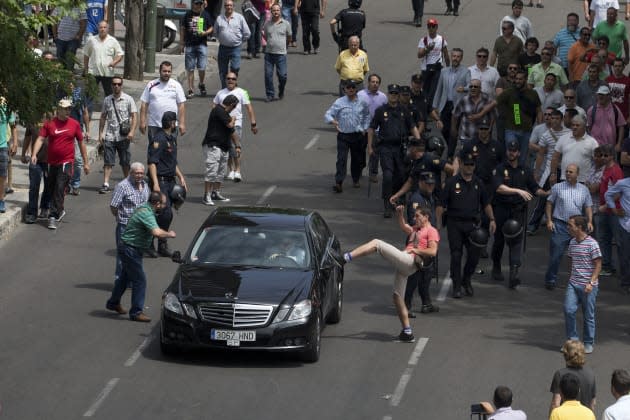 Uber can't keep itself out of the news lately. The San Francisco-based company best known for creating a mobile app that connects taxi/livery services with smartphone users is now banned from operation in Spain. The injunction is a result of a complaint from the Madrid Taxi Association, and it forces Uber to cease operations in the country immediately; a statement from the Madrid court announcing the injunction points out that Uber didn't even get to defend itself, and cites Uber's business license being from Delaware (a tax haven where many companies file, despite not being based there) as the reason.

If all this sounds a bit like a kangaroo court, that's because it likely is: entrenched taxi and livery companies have been working against Uber and other ridesharing services in a variety of cities all over the world. Uber is of course far from perfect -- this is a company that was recently caught plotting against journalists, headed by a CEO that's been heavily criticized for misogyny -- but it wasn't even present to defend itself in the Spanish court hearing that ended its ability to function in Spain. Expect Uber to push back in the coming weeks; the company didn't respond to request for comment as of publishing.

Of the last several stories we've written about Uber, three are directly related to the company's services being thwarted in one region or another. Nevada banned Uber, and Portland sued Uber, and New Delhi banned Uber (over an alleged sexual assault by one of its drivers, no less -- exactly the fear that many have expressed over Uber's model of connecting drivers that are outside government regulation with fares).

This battle is sure to go on, as entrenched businesses continue to push back against modernized taxi services. We've written about that at length, right here. What's less sure than ever is if Uber will be the one fighting the battle -- can the company keep taking these hits and keep on running? And do consumers even want Uber to win at this point?

In this article: banned, injunction, law, legal, mobilepostcross, spain, uber, video
All products recommended by Engadget are selected by our editorial team, independent of our parent company. Some of our stories include affiliate links. If you buy something through one of these links, we may earn an affiliate commission.