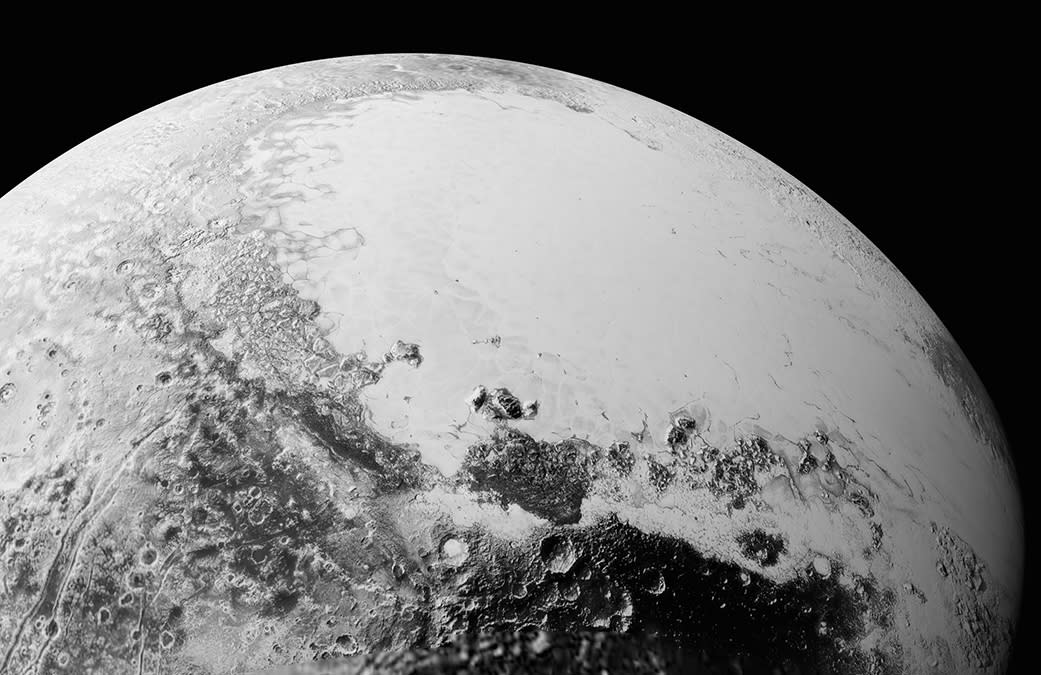 When NASA's New Horizons spacecraft shot past Pluto, the agency released some stunning photos to celebrate the occasion. The last couple of months have been quiet, however, because the spacecraft has only been sending back data collected by its energetic particle, solar wind and space dust instruments. While this has led to some new discoveries, many of us have been itching to see a little more of the icy dwarf planet. Well, good news! NASA now has a fresh batch of photos for us to drool over. The most eye-catching one is a mosaic (above) that shows what the planet would look like if you were stood 1,100 miles (1,800 kilometers) above the equator. Looking north-east, you can see a cratered region called Cthulhu Regio and some icy plains named Sputnik Planum. The complete set offer a detailed look at possible dunes, valleys, and nitrogen ice flows that NASA thinks erupted from some of the dwarf planet's mountainous regions. "Seeing dunes on Pluto -- if that is what they are -- would be completely wild, because Pluto's atmosphere today is so thin," said William B. McKinnon, a deputy lead on the New Horizons Geology, Geophysics and Imaging team. "Either Pluto had a thicker atmosphere in the past, or some process we haven't figured out is at work. It's a head-scratcher." New Horizons began sending these photos and other data back to Earth on September 5th. It's an agonizing process -- because the craft is so far away, it can only send data at a rate of 1 to 4 kilobits per second. NASA hopes to publish new, unprocessed photos every Friday, so hopefully these are just the first of many memorable Pluto snapshots this year.

In this article: nasa, newhorizons, photos, pluto, spacecraft
All products recommended by Engadget are selected by our editorial team, independent of our parent company. Some of our stories include affiliate links. If you buy something through one of these links, we may earn an affiliate commission.