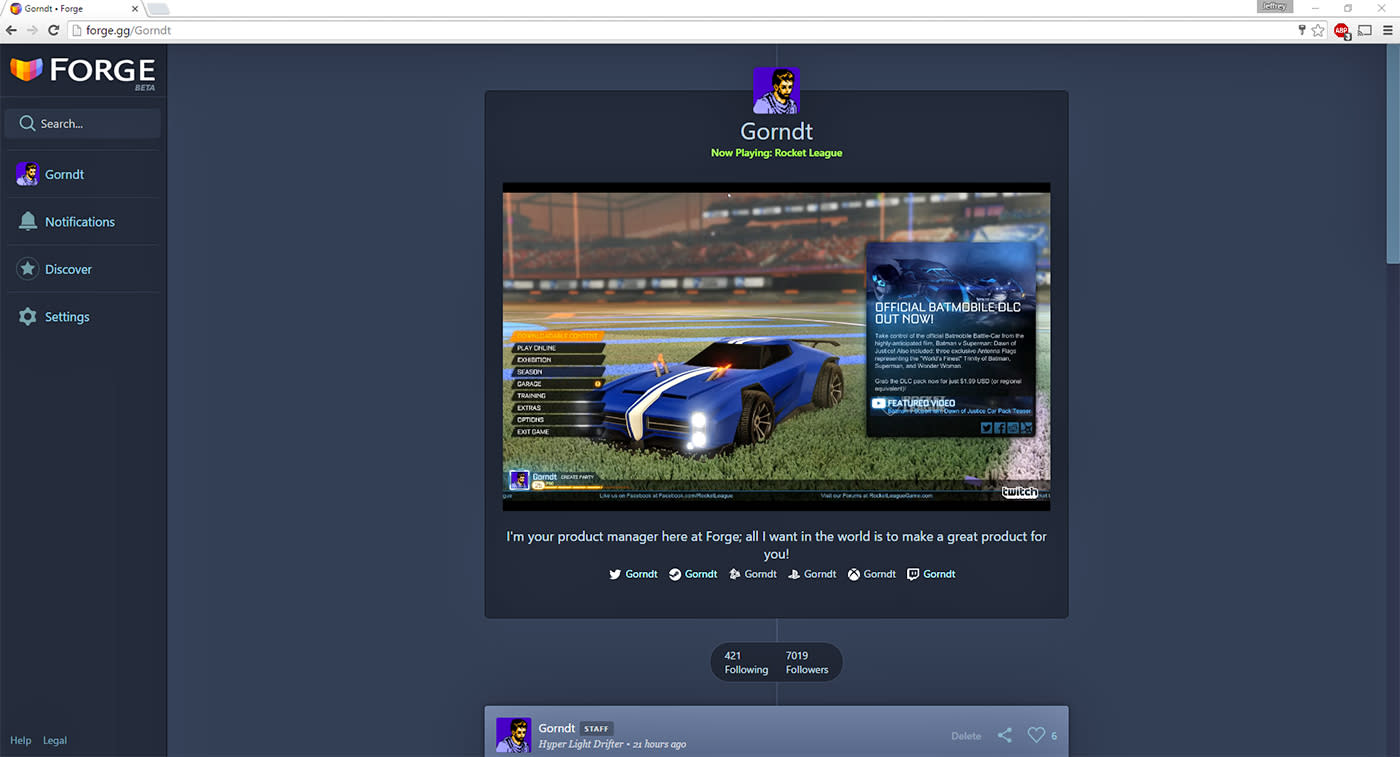 About a month ago, my cousin asked for tips on livestreaming. He had OBS, the software of choice for many streamers, but he had a long way to go before his debut on Twitch or YouTube Gaming. OBS works, but it's complex for people just starting out, offering a lot of options that could screw up your livestream with an accidental click.

OBS is sometimes tricky even for entrepreneur Jared Kim, who's been developing game-capture apps for the past eight years. He has a theory about the steep learning curve: Services like OBS aren't made for casual streamers. They're dense because they're used mainly by professionals or dedicated players who can spare the time (and money) to make their livestreams perfect. This leaves my cousin and tons of other potential Twitch stars in the dust. For them, Kim has more than a theory: He has a solution.

Kim's latest project, Forge, gets an accessible Twitch and YouTube livestreaming function today -- on top of its existing clip-sharing capabilities. Here's how Forge works now (it's Windows-only at the moment): Boot up your PC game with Forge running in the background, and the service records your gameplay. Press F5 to bookmark cool plays for highlighting and sharing later, or snip and share them right away in-game. All of this takes place on top of your game; you don't need to exit out once Forge is rolling.

The new livestreaming option integrates into this existing structure. If you want to go live on Twitch or YouTube, hit F8, select your platform of choice, set a title and start playing. Your buddies can watch you play League of Legends, Dota 2 or Hatoful Boyfriend live (or any other PC game, of course). Forge can push notifications that you're live to Twitter, and you can still bookmark, highlight and share clips while you're on the air.

Forge's livestreaming capabilities are pared down compared with services like OBS. For starters, there are no options to add a webcam, fancy borders or chat. It's a livestreaming service, plain and simple, and it's meant for new or casual players. The professionals already have OBS, after all.

"We're really attracted to these very simple, single-focused, single-mission apps that have a very cohesive experience," Kim says. "And I think that's essentially what we built."

In this article: av, forge, gaming, internet, livestream, LiveStreaming, personal computing, personalcomputing, services, streaming, twitch, youtube, youtubegaming
All products recommended by Engadget are selected by our editorial team, independent of our parent company. Some of our stories include affiliate links. If you buy something through one of these links, we may earn an affiliate commission.