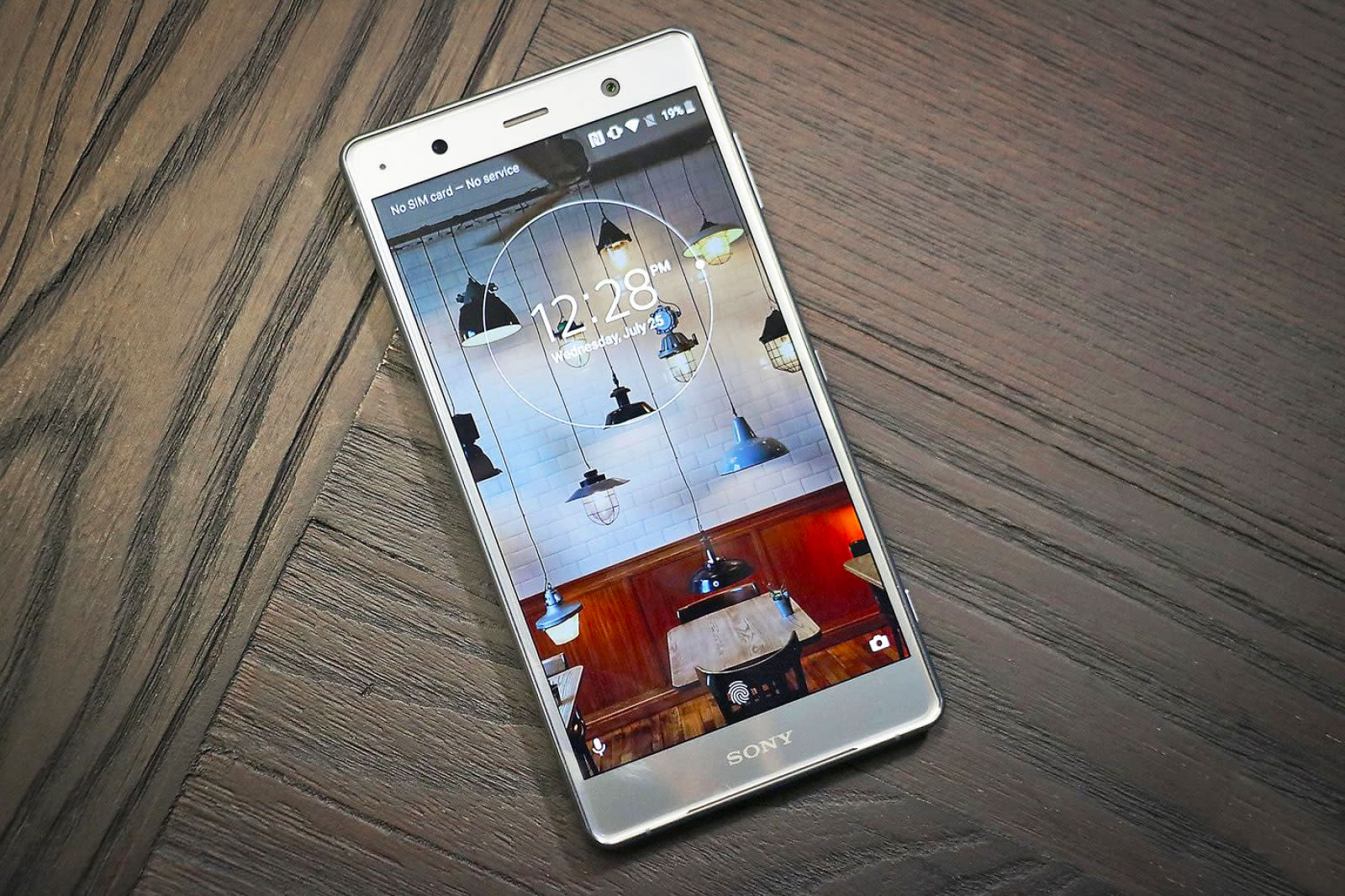 Sony Xperia XZ2 Premium review: Too quirky for the mainstream

Sony's latest flagship is all about 4K HDR. The Xperia XZ2 Premium not only has a 4K HDR display, but it's also one of the first phones that can record video at that resolution and dynamic range. It's also the first Xperia to sport dual rear cameras and, like its predecessors, comes with two front-facing speakers and shoots super-slow-mo clips. The Premium also offers stronger-than-usual haptic feedback that's meant to enhance music playback and gaming, something its brothers from this year's XZ2 family also offer. On paper, the XZ2 Premium is a promising device, but only for a very specific audience.

Before we get to that, let's start with how ugly this thing is. In front, the XZ2 Premium has the same blocky rectangular shape as older Xperias, except its back is curved instead of flat. The entire phone is covered in glass, which is glossy but smudges easily. I like the silver color of my review unit, but the XZ2 Premium's overall aesthetic feels outdated. Thick, curved enclosures went out of style two years ago, Sony!

I can overlook a stodgy design, but I can't ignore how slippery the XZ2 Premium is. Its glass cover and slight bulge make it difficult to balance on many surfaces, causing it to drop to the ground at the slightest provocation. It fell off my couch when I shifted my weight, and even when I set my Pixel 2 down next to it. This is a kamikaze phone you'll constantly have to keep an eye on. The slightly reassuring news is that the phone is covered in Gorilla Glass 5, which helped it survive those relatively short falls without a scratch. But you'll want be extremely careful about where you place it.

I was also annoyed by the location of the fingerprint sensor. The XZ2 Premium is one of the first Xperia phones available in the US to even have a fingerprint reader (again, lagging its rivals). In previous models released in other markets, Sony embedded the scanner in the power button on the edge. On the latest Xperias, though, the company moved it to the rear. The placement isn't as problematic on the XZ2, which has just one camera on the back, but the Premium has two lenses that stack vertically, pushing down the fingerprint sensor. It's lower than where my finger would naturally rest, and I often end up touching the camera instead, which causes me to smudge up the lens.

I did appreciate that Sony retained the dedicated shutter button on the XZ2 Premium's right edge. As on previous Xperia phones, holding this down launches the camera app whether the device is awake or asleep, and it even offers a half-shutter step for me to find focus without having to touch the screen. 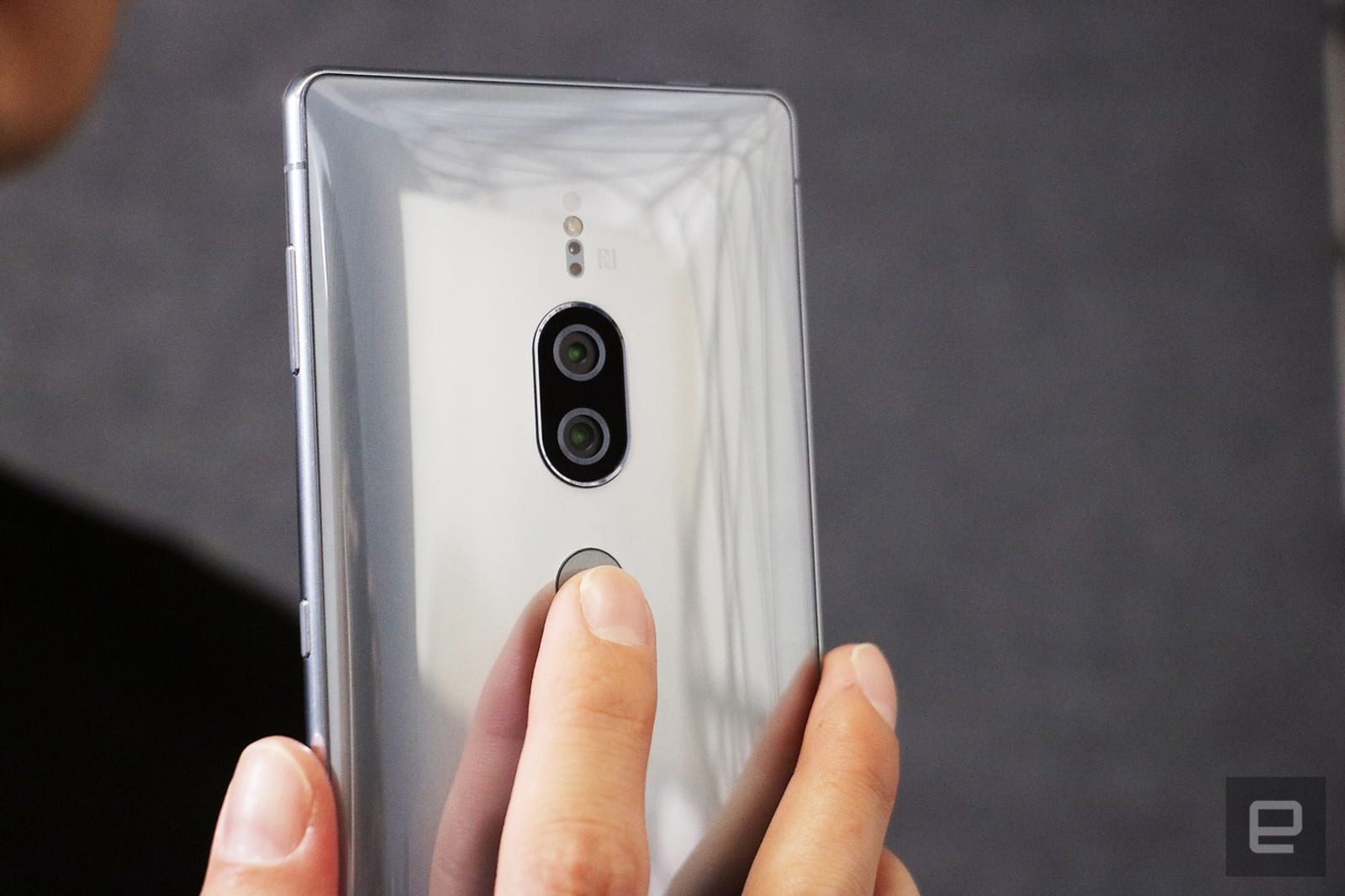 Speaking of, the XZ2 Premium's 5.8-inch 4K HDR display is quite lovely. It's bright, colorful and crisp, and I marveled at beautiful landscapes in the high-res HDR videos I found on YouTube. But the screen appears to have an odd blue cast by default. I went into the settings to try and get rid of the display's bluish tone, and none of the preset modes looked right. You can pick from Standard, Professional or Super Vivid or go into the white-balance settings to further fine-tune the colors. It took quite a bit of finessing, but I ultimately got to a fairly accurate profile. I like the degree of precision Sony enables here, but I wish the screen looked better right off the bat.

Complementing the XZ2 Premium's display is a pair of front-facing speakers that produce loud, clear sound. It was easy to hear "Landslide" by Fleetwood Mac, even over the dramatic Sex and the City dialogue playing on my TV. (Yes, I have great taste in entertainment.) Adding to the sensory overload is the XZ2 Premium's "Dynamic Vibration" system. Essentially, this is a stronger-than-usual haptic motor that rumbles along to your music or games. The regular XZ2 also has this, and, just as it was there, this feature is inconsistent and gimmicky. You control the intensity by pressing the volume rocker and selecting one of five levels, then wait and see what happens. The vibration kicks in inconsistently, and ultimately it's not very useful.

More noteworthy is the fact that this is the first Xperia phone to sport dual rear cameras. Sony is about two years behind the rest of the industry here, and you'd think that the company would have used that extra time to add features its competitors lacked. Alas, there are no surprises here. The XZ2 Premium pairs a 12-megapixel monochrome sensor with a 19-megapixel color sensor and lets you shoot pictures with artificial depth of field -- just like most flagship phones.

The XZ2 Premium does offer higher ISO than the competition -- up to ISO 51,200. Although that did help me take great low-light pictures with less noise, I've also been able to achieve similar results with other phones that offer some sort of ultra-low-light mode, like the Huawei P20 Pro and the LG G7 ThinQ. It's worth noting, though, that the P20 Pro can hit ISO 102,400 under the right circumstances, such as in auto night mode.

Another standout feature is the ability to record 4K HDR videos -- a first not just for the XZ2 lineup but for the entire industry. By default, the camera shoots at full HD with HDR off, but once you tune the settings in the app, you'll be greeted by multiple warnings about how the device might heat up and stop recording if it runs out of space. That's a relatively minor trade-off, considering how large 4K HDR files can run. Ultimately, though, the payoff might not be worth it. The videos I recorded with HDR were dull and flat compared with similar footage shot without HDR. You'll have to post-process the clips to reclaim the color and brightness, which is something only advanced users will have the time and skill to do. For that audience, though, this is likely a welcome feature.

I did appreciate the predictive capture tool. When you're framing your shot, the XZ2 Premium is already on the lookout for interesting things happening, and it will trigger when it detects a smile or a big movement. I tried to take a portrait of my colleague, and pressed the shutter button when he smiled, but the predictive tool also saved shots of moments before, when he was making a face. It's like the iPhone's Live Photos, capturing a couple of seconds before you press the button, except it stores stills instead of an animation.

In general, the XZ2 Premium takes crisp photos, but they tend to have a bluish-green cast. Both the front and rear cameras had the same effect, and my Pixel 2 delivered much more accurate colors. At first I thought it was because I was viewing the photos on the Xperia itself, but the images were just as bad on my computer's screen. In some other cases, though, after I had played with the HDR settings and then put everything back on default, the white balance was more accurate. At times, the XZ2 Premium even shot better, more vibrant selfies than my Pixel. The rest of the XZ2 Premium is basically the same as the XZ2, which launched a few months ago. It has the same Snapdragon 845 processor, allowing for powerful multitasking in both cases. The Premium didn't stutter as I scrolled endlessly through my Instagram feed, played games like Harry Potter: Hogwarts Mystery and The Sims, and watched makeup tutorials on YouTube. Switching between apps and launching things like the camera on this Android 8 Oreo device happens without delay, and I've grown accustomed to the Sony's lightweight Android skin, so it doesn't bother me.

The XZ2 Premium's battery lasts about a day and a half on light use, although typically it conks out every night. It charged back up in almost no time at all, though, and I frequently got back to nearly 25 percent about 15 minutes after plugging it in.

Sony fans might find suitable alternatives to the XZ2 Premium within the Xperia XZ2 lineup itself. The XZ2 Compact, for example, is much less ugly, since it doesn't have that smudgy glass covering, the one makes the Premium so slippery. All three XZ2s use the Snapdragon 845 chip, so you won't notice performance differences across the range, and all three offer features like the 4K HDR video recording and dynamic vibration. The Premium has the biggest, sharpest screen; both the 5.7-inch XZ2 and the 5-inch Compact model run at full HD+ (2,160 x 1,080). Display specs aside, the Premium is the only one of the XZ2-series phones to have dual cameras and the 4K HDR panel. It costs $200 more than the XZ2, though, and is almost twice the price of the Compact ($650).

If you're merely looking for a high-end Android phone, you'll find plenty more options. The Samsung Galaxy S9 and S9+ both take excellent photos in the dark, thanks to a "Dual Aperture" feature that opens up the lens to let in a lot more light. The Plus sports dual cameras, just like the XZ2 Premium. The S9s also pack the same Snapdragon 845 chip, along with longer-lasting batteries. Finally, the Samsung flagships are much more stylish and won't keep falling off your couch, either.

Also check out the LG G7 ThinQ. It has an AI camera similar to Huawei's that identifies what you're shooting and automatically tweaks settings to optimize your photo. The G7 also takes clear, vibrant pictures without the AI's help and has some useful video-recording features that vloggers may appreciate. For readers outside the US, there's also the Huawei P20 Pro, which uses three sensors on the back to produce some of the best smartphone photography we've seen, and comes in a gorgeous "Twilight" gradient finish.

All told, the Xperia XZ2 Premium has plenty of rivals, but it's still the only one that can (officially) record and display 4K HDR video, so if that's something you must have, you might want to consider it. Otherwise, almost any other flagship would be a better (and cheaper) option.

Ultimately, the XZ2 Premium is a strong flagship with some quirky features. But it also has quite a few flaws. I won't harp too much on the outdated design, since personal taste is subjective, but I can't ignore the massive price tag. For $999, the Xperia XZ2 Premium doesn't deliver enough, unless you're a pro moviemaker who really wants to record and watch 4K HDR footage on a phone. Otherwise, you're better off getting a Galaxy S9 or S9+ or holding out for the next Pixel phone.