Even if you slap a pair of oversized googly eyes on it.

With the introduction of its latest delivery drone iteration, the Scout, Amazon is once again reassuring the shopping public that automated package delivery services are just just around the corner. Just as they've been promising since 2013, when founder Jeff Bezos went on 60 Minutes and claimed that the technology would be commonplace within 5 years. But unfortunately for his predictions, the march of progress rarely sticks to a set schedule.

That's not for a lack of trying. Over the past half decade, a litany of companies worldwide have sought to build and deploy dozens of drone-based delivery services, with varying degrees of success. Last May, Ele.me, Alibaba's online meal ordering service, began using drones in Jinshan Industrial Park to get meals to mouths in just 20 minutes, a fraction of the time it'd take a human courier to drive through Shanghai traffic. In Iceland's capital city, Reykjavik, drones are cutting the time it takes to ferry food across the Elliðaá River from 25 minutes to four. Starship Robotics has recently announced plans to roll out a package delivery service in the UK.

The island nation of Vanuatu already employs courier drones to ferry vaccines while an ambitious pilot program by the Zipline robotics company is delivering blood packs to remote clinics in Rwanda, cutting the wait time from four hours down to 15 minutes.

Stateside, players at the King's Walk Golf Course in North Dakota, for example, can have snacks and drinks ferried out to them on the course via a human-controlled drone. Students at George Mason University even have a drone delivery service tied directly into their meal plans while those at the University of the Pacific can have a bevy of Pepsi-brand beverages delivered via Snackbot.

But despite successes such as these, drone-based deliveries still have a number of technological and regulatory hurdles to overcome before we'll start seeing them overhead regularly. Ignoring their tendencies to crash into walls, crash into people, and randomly catch fire, drones are still limited in how much they can carry and how far they can travel compared to human couriers.

What's more, programs like Amazon Prime Air are beholden to the weather -- if there's a chance for rain or snow, the drones are grounded -- as well as restricted to fly in airspaces where piloted craft do not.

Then you have the issue of noise. A NASA study from 2017 found that people judged road noise "systematically... to be less annoying" than the whirring of quadcopter blades and that their results "casts doubt on the idea that sUAS operators can expect their operations to be greeted with minimal noise-based opposition as long as the sound of their systems are 'no louder than' conventional package delivery solutions."

This effect played out in Canberra, Australia last November, when 500 irate Bonython residents signed a petition demanding that a drone-based delivery program be scuttled on account of the auditory pollution generated by the flying machines as well as privacy concerns.

"With the windows closed, even with double glazing, you can hear the drones," one resident told ABC. "From a quarter past seven in the morning we'd hear our first drone flyover and you won't be able to sleep for the rest of the day because the drones are flying from 7am to 4pm." 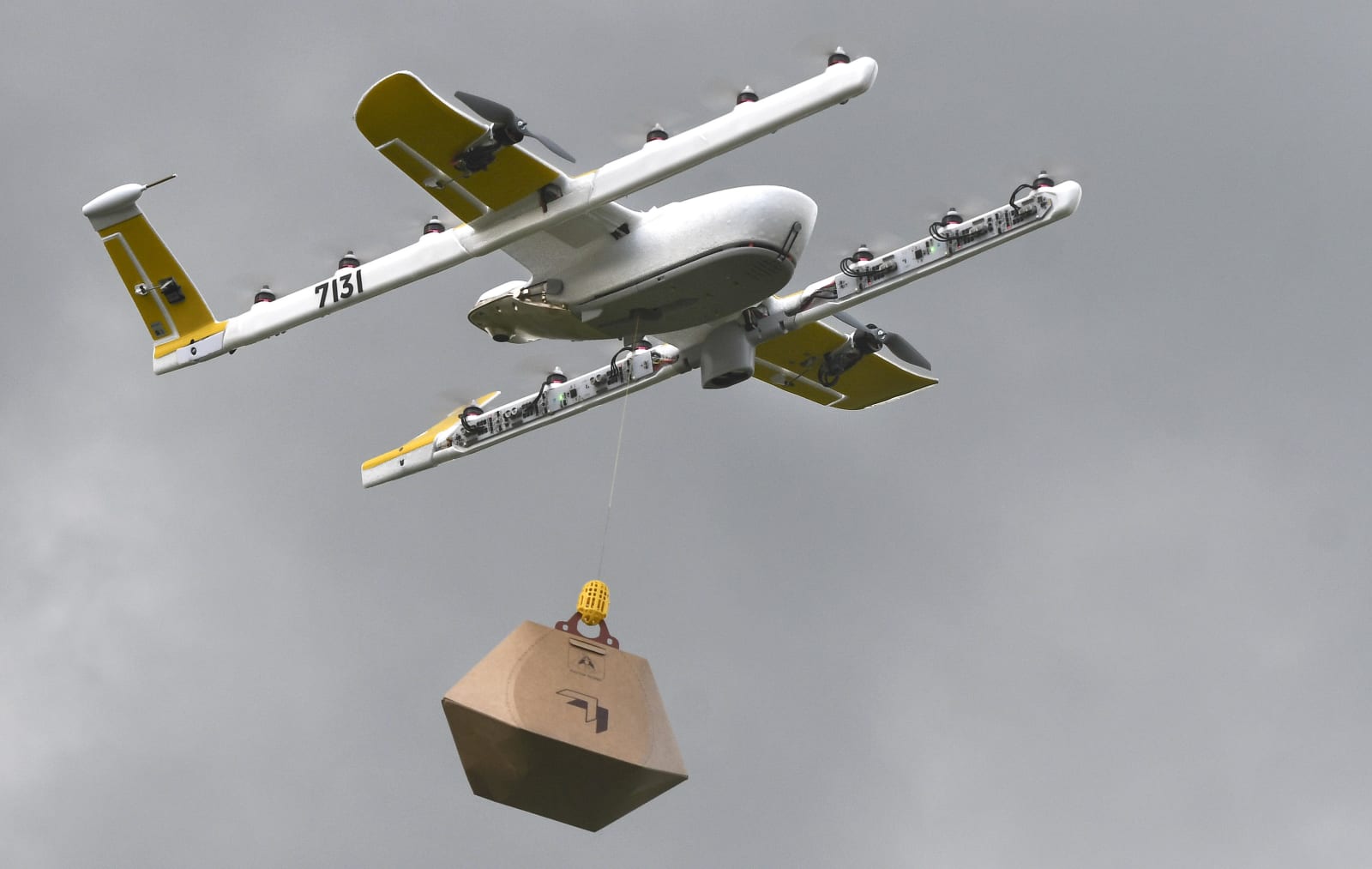 Alphabet's subsidiary, Wing, whose drones were used in the ill-fated pilot project, has since set about redesigning the flyers to operate more quietly as well as altering their pre-programmed flight paths to avoid buzzing over the same set of houses all day. Hopefully the design changes will be in place when the company launches its next test program in Finland later this Spring.

The threat of collisions with people remains very real as well, despite FAA regulations stipulating that drones designed for making deliveries must weigh less than 55 pounds and operate below 400 feet. A 2017 study by the agency, which pulled research from nearly two dozen universities, found that "blunt force trauma, penetration injuries, and lacerations as the most significant threats to the public and crews operating Small Unmanned Aerial System (sUAS) platforms." And it's not just the drone itself that could cause injury. The study also noted that even a modestly sized 5-pound parcel, which is what Amazon Prime Air carries, could cause serious injuries if dropped from a sufficient height.

But despite these obstacles, the trend towards autonomous delivery services is only accelerating as parcel carriers like UPS start looking to drones to serve as its "last mile" solution. Some of the systems that are also under consideration are downright whimsical. Continental, for example, promoted its quadrupedal delivery drone called the ANYmal, which looks like a cross between an AIBO and a Boston Dynamics Big Dog, at this year's CES. Stop & Shop, on the other hand, is forgoing the last mile altogether and putting entire vegetable stands on wheels. But just so long as the next generation of delivery robots come equipped with comically large googly eyes, we can rest assured that they'll be able to carry out their rolling and flying duties without interference from a distrustful pubic. Haha, just kidding, people are going to kick those drones to pieces.