They're both pushing PCs forward in their own ways.

You can thank AMD and Intel for the influx of news out of Computex over the past week. Both chip companies announced some major new products: Intel showed off its 10-nanometer 10th-gen laptop chips, and AMD gave us details on its third generation Ryzen CPUs and first Navi GPUs. At first glance, that might all sound like typical tradeshow news, the next steps in a boring, iterative upgrade cycle. But each announcement spoke volumes -- they're not just showing us what Intel and AMD are working on for the next year, they gave us a preview of what's to come for the next decade.

Intel's new 10nm chips -- which have a smaller and more efficient architecture than their previous 14nm process -- have been a long time coming. Initially expected for 2015, the company suffered delay after delay until finally releasing a 10nm "Cannon Lake" chip last year. (Anandtech has a great breakdown of the drama Intel faced over the years.) But that processor was only a lowly Core i3 without onboard graphics, and it only showed up in an obscure Lenovo Chromebook. It's hard to call that a ceremonious launch. Intel admitted they were only shipping the processor in low quantities, perhaps as a test run for large-scale 10nm manufacturing. 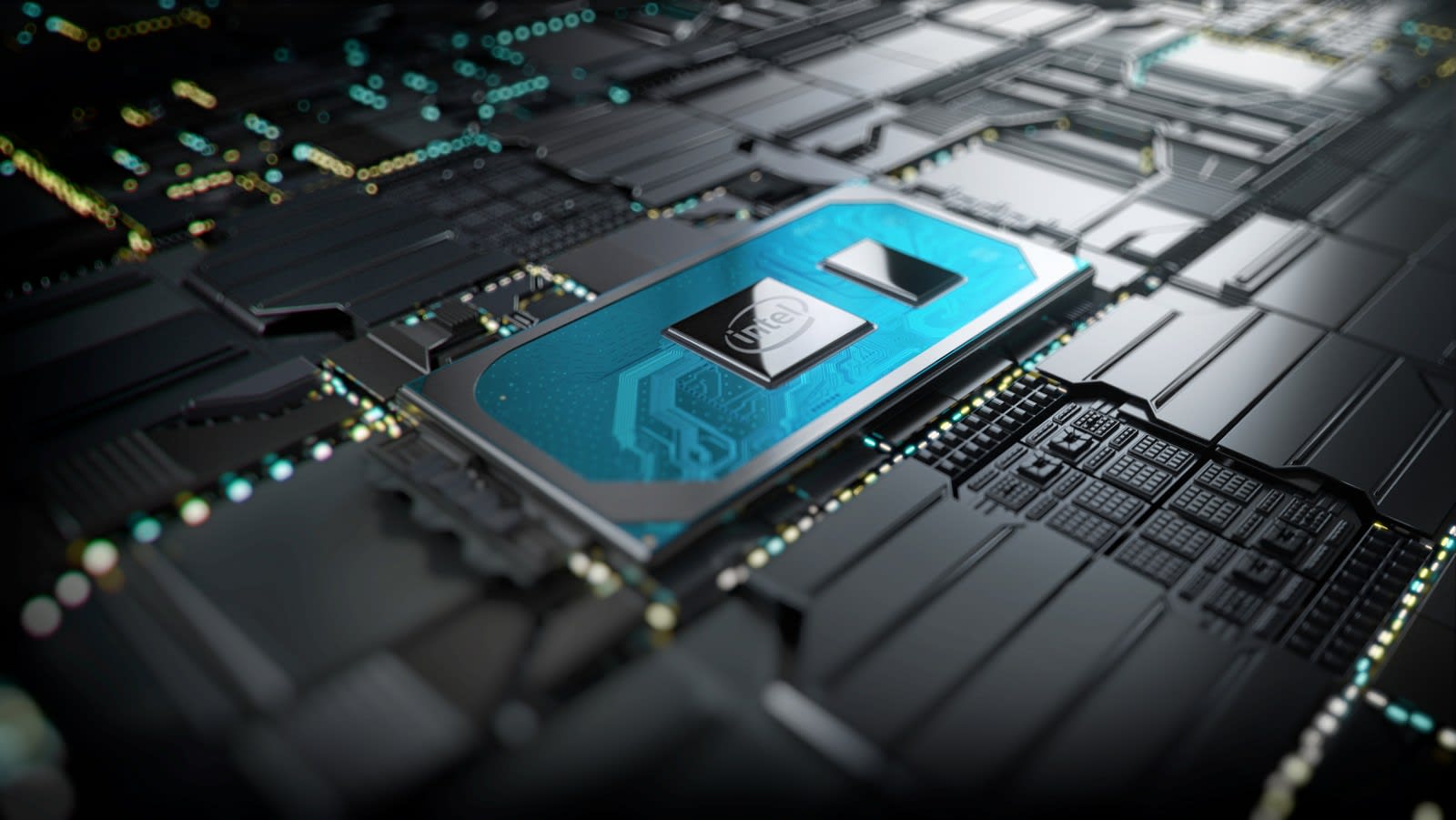 Now with its 10th-gen chips, Intel's true foray into smaller chip production has begun. And thanks to that architecture revamp, the new processors offer some transformative improvements. That includes significantly faster integrated graphics and an 18 percent increase in instructions per clock (IPC), something that'll speed up performance across every app. And of course, the new chips will finally help Intel catch up with AMD, which has gone all in with a more sophisticated 7nm production process for its new GPUs and CPUs. The real question is if Intel will be able to keep up its supply of 10th gen hardware as manufacturers start to implement it. That's one reason why the company kicked off the chips with a focus on thin and light laptops.

For now, Intel's new processors are targeting ultraportable notebooks like Dell's XPS 13 2-in-1. The company said earlier this month that it plans to start shipping 10nm chips in June, and it also expects to have a 7nm discrete GPU ready for 2021. And now, it's in a better position to implement its Foveros technology, a 3D chip design that's able to stack things like CPU and graphics chiplets together. After being forced to stick with its 14nm process for the past five years, Intel finally has a gameplan for the road ahead. The company still needs to prove it's taking security more seriously, though, as vulnerabilities for its Core lineup are still popping up.

The main takeaway for consumers? You can expect ultraportables to get even thinner while being more powerful than ever, with the ability to run games at playable framerates. And it'll be interesting to see what sorts of new devices Intel's 10th-gen chips will enable. At Computex, we saw a dual-screen laptop concept, as well as a wild gaming notebook with a secondary screen right below the main display, similar to the ASUS ZenBook Pro Duo. More realistically, the latest CPUs will likely be key to Intel's Project Athena initiative for next-generation laptops.

AMD's third-generation Ryzen chips target an entirely different type of user: Desktop users who demand tons of power. The highlight is the 12-core/24-thread Ryzen 9 3900X, which will sell for an astoundingly low $499. While that might not sound cheap, it's competing directly with Intel's Core i9-9920x, which sells for $1,189 today. Sure, Intel might be able to lower its price eventually, but I wouldn't bet on it being cut in half anytime soon. AMD also claims its 12-core processor is around 16 percent faster than Intel's during multithreaded rendering in Blender -- so it's not only cheaper, it outperforms a chip that costs more than twice as much. 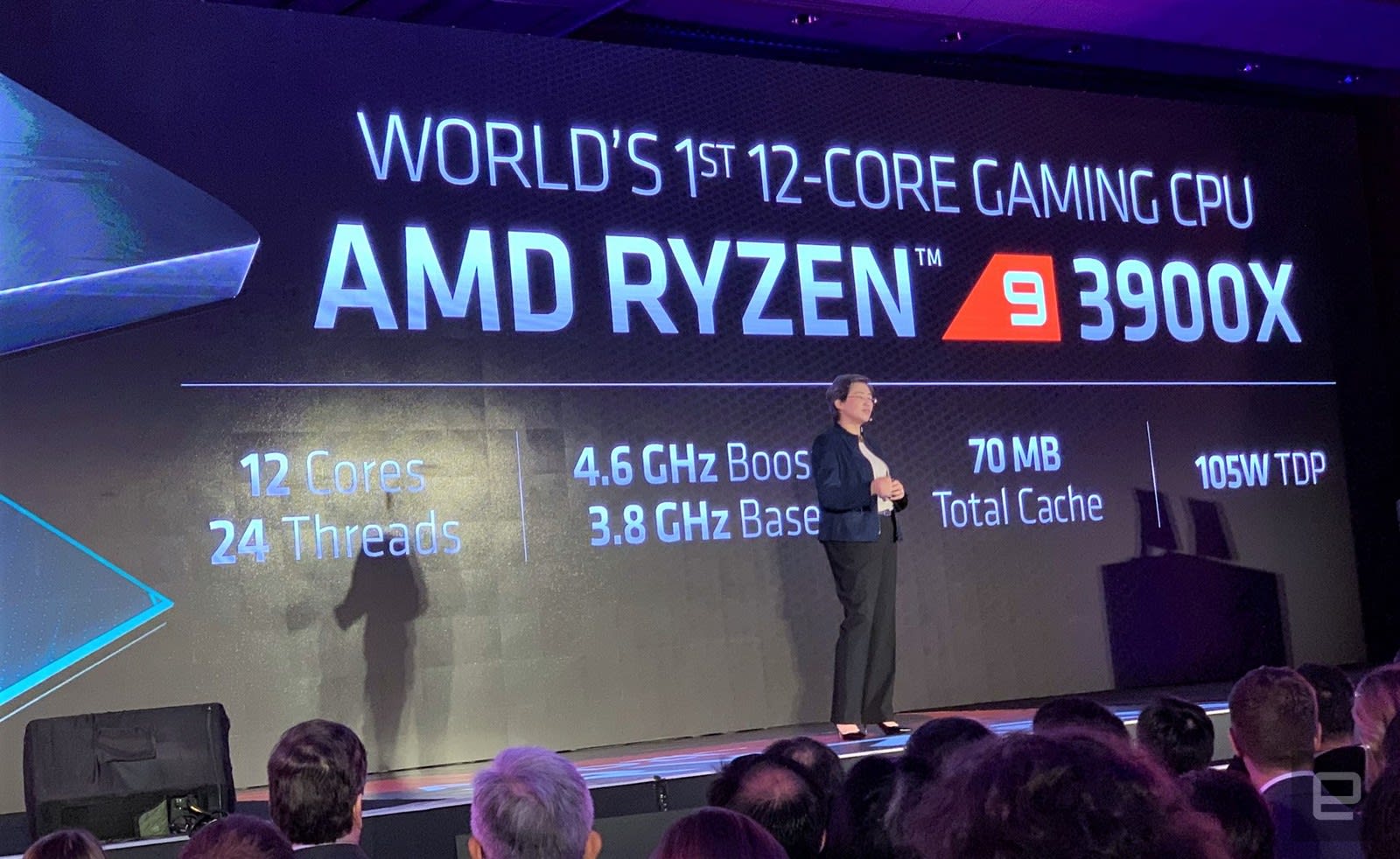 The key to AMD's win is its new 7nm Zen 2 architecture, which allows its chips to be dramatically more power efficient than Intel's. That 12-core monster CPU has a 105-watt thermal design profile (TDP), which describes the typical amount of power that it'll eat up under max load. Intel's chip, meanwhile, has a 165W TDP. In real-world usage, that means Intel's hardware needs beefier cooling to keep temperatures down, and it'll be a bigger hit on your power bill.

For power users, AMD's third-generation Ryzen chips are a truly compelling choice compared to Intel's 9th-gen Core lineup. All of AMD's chips are cheaper and faster in multi-threaded benchmarks. Intel's only counter-point during Computex was the 9900KS, a beefed-up version of its popular i9 processor with the ability to hit 5GHz across all of its cores. The company hasn't revealed much about that chip yet though, including its TDP, so it's unclear what sort of cooling you'd need to tame that beast. 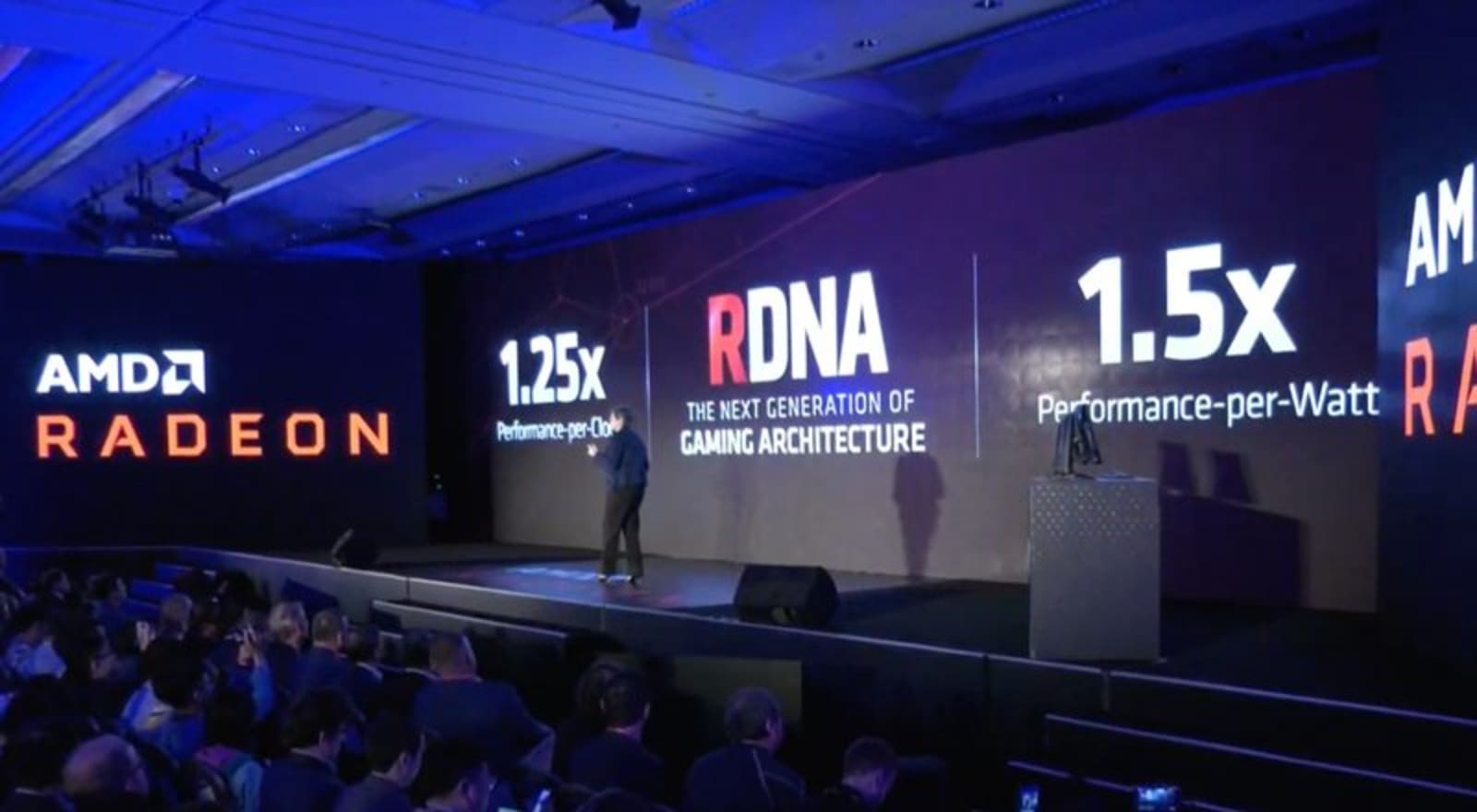 AMD also announced the Radeon RX 5000 GPUs, its first 7nm next-generation "Navi" (now known as RDNA) video cards. We only got a few brief details about the RX 5700, which will take on NVIDIA's mid-range RTX 2070. The new cards will have speed and power improvements across the board, thanks to the more efficient architecture, and they'll be the first to support PCIe 4.0. Again, the focus here is on being fast and efficient. Unfortunately, we'll have to wait until E3 to hear more about these new GPUs.

I'm just hoping AMD manages to give us some sort of hints about ray tracing. That's the technology NVIDIA banked on with its RTX video cards, and it allows for far more realistic lighting, shadows and reflections. The company's CEO and graphics leads have admitted it's working on ray tracing, but it's unclear exactly when and how it'll show up. Ideally, AMD will have it ready in time for the next-generation gaming consoles from Sony and Microsoft, since they'll be relying on its new GPUs.

Given that both Intel and AMD are focused on very different consumers with their announcements, it's hard to say who actually won. Intel's chips will make ultraportable laptops better than ever, while AMD's will make it easier for consumers to build desktops for powerful multi-threaded performance with tons of CPU cores. Intel's laptop gains will force AMD to work harder on notebook hardware, while AMD will continue to push Intel to try harder with its desktop CPUs. It's the best outcome of true technology competition: The consumer always wins.

All products recommended by Engadget are selected by our editorial team, independent of our parent company. Some of our stories include affiliate links. If you buy something through one of these links, we may earn an affiliate commission. All prices are correct at the time of publishing.
View All Comments
Intel and AMD won Computex 2019