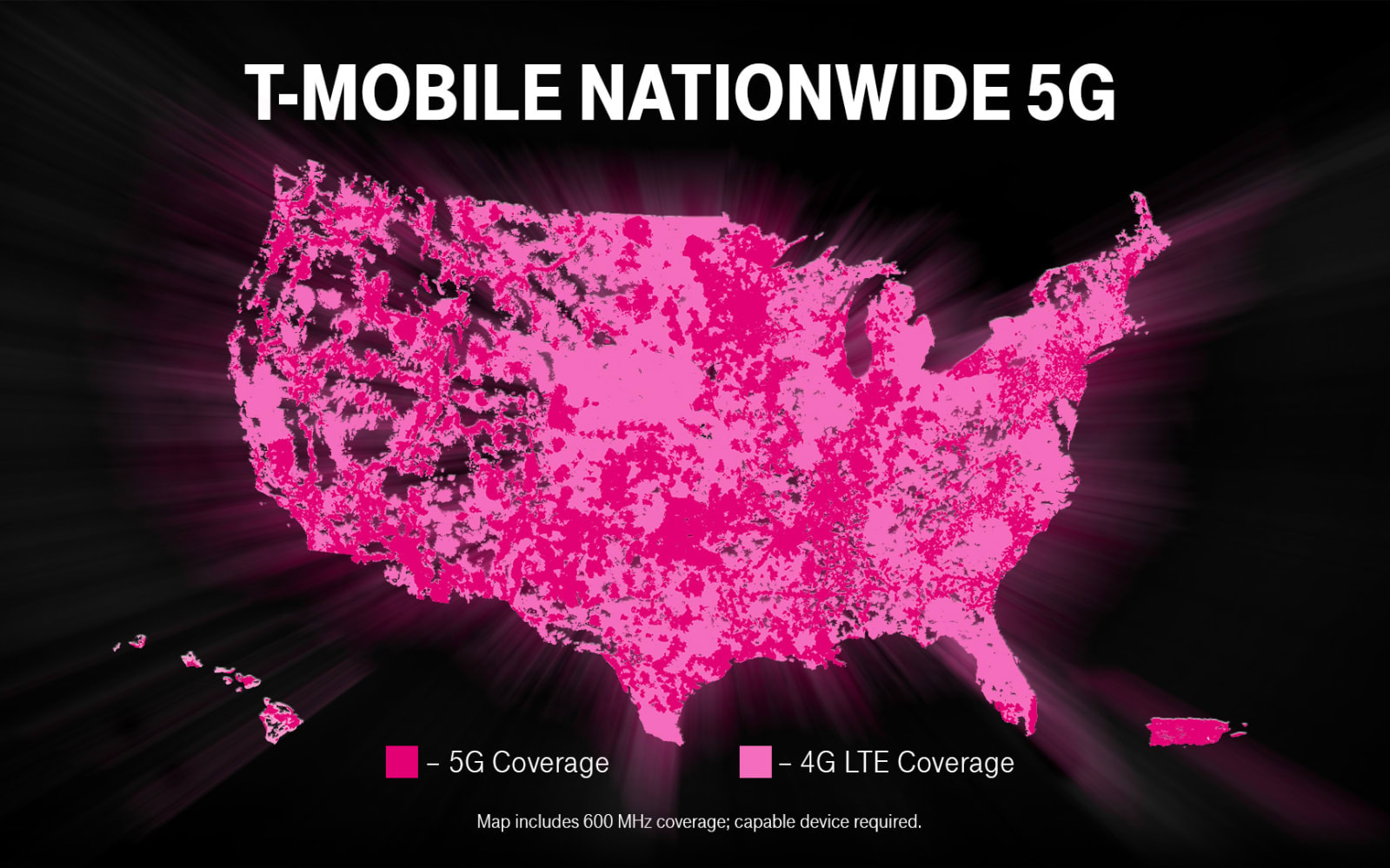 Last month, T-Mobile promised its 5G network would go live in 5,000 cities and towns on December 6th -- if its merger with Sprint went through. That deal is not yet final, but today, a few days ahead of schedule, T-Mobile says it's launching its nationwide 5G network. The catch is that, for now, T-Mobile is offering 600 MHz "low-band" 5G.

The network covers more than one million square miles, including many rural areas, and 200 million people. The "low-band" 5G won't be as fast as the 5G we've seen from carriers like Sprint and Verizon (Engadget's parent company), but it will have better range, so it shouldn't run into problems like not being able to travel through walls. It will be accessible to a lot more people, and T-Mobile says it will cost the same as its LTE plans.

"While Dumb and Dumber focus on 5G for the (wealthy) Few, launching in just a handful of cities — and forcing customers into their most expensive plans to get 5G — we're committed to building broad, deep nationwide 5G that people and businesses can access at no extra cost with the New T-Mobile ... and today is just the start of that journey," said T-Mobile CEO John Legere.

If the T-Mobile and Sprint merger closes, T-Mobile will add Sprint's 5G spectrum (2.5 GHz). In that case, customers could see faster speeds, as well as improved range. "If the merger with Sprint closes, the New T-Mobile will be able to build on this foundation to deliver transformational broad and deep 5G for All," Sprint said in a press release.

Of course, you'll need a 5G-enabled phone to take advantage of the network. The OnePlus 7T Pro 5G McLaren and the Samsung Galaxy Note10+ 5G are available for pre-order through T-Mobile today, and they'll be available in T-Mobile stores on December 6. The company plans to launch 15 more 5G phones in 2020.

Source: T-Mobile
Coverage: PC Mag
In this article: 5g, 5g phone, 600mhz, business, coverage, coverage map, gear, internet, low-band, merger, mobile, nationwide, network, OnePlus 7T Pro McLaren Edition, samsung galaxy note 10+, sprint, t-mobile, verizon
All products recommended by Engadget are selected by our editorial team, independent of our parent company. Some of our stories include affiliate links. If you buy something through one of these links, we may earn an affiliate commission.