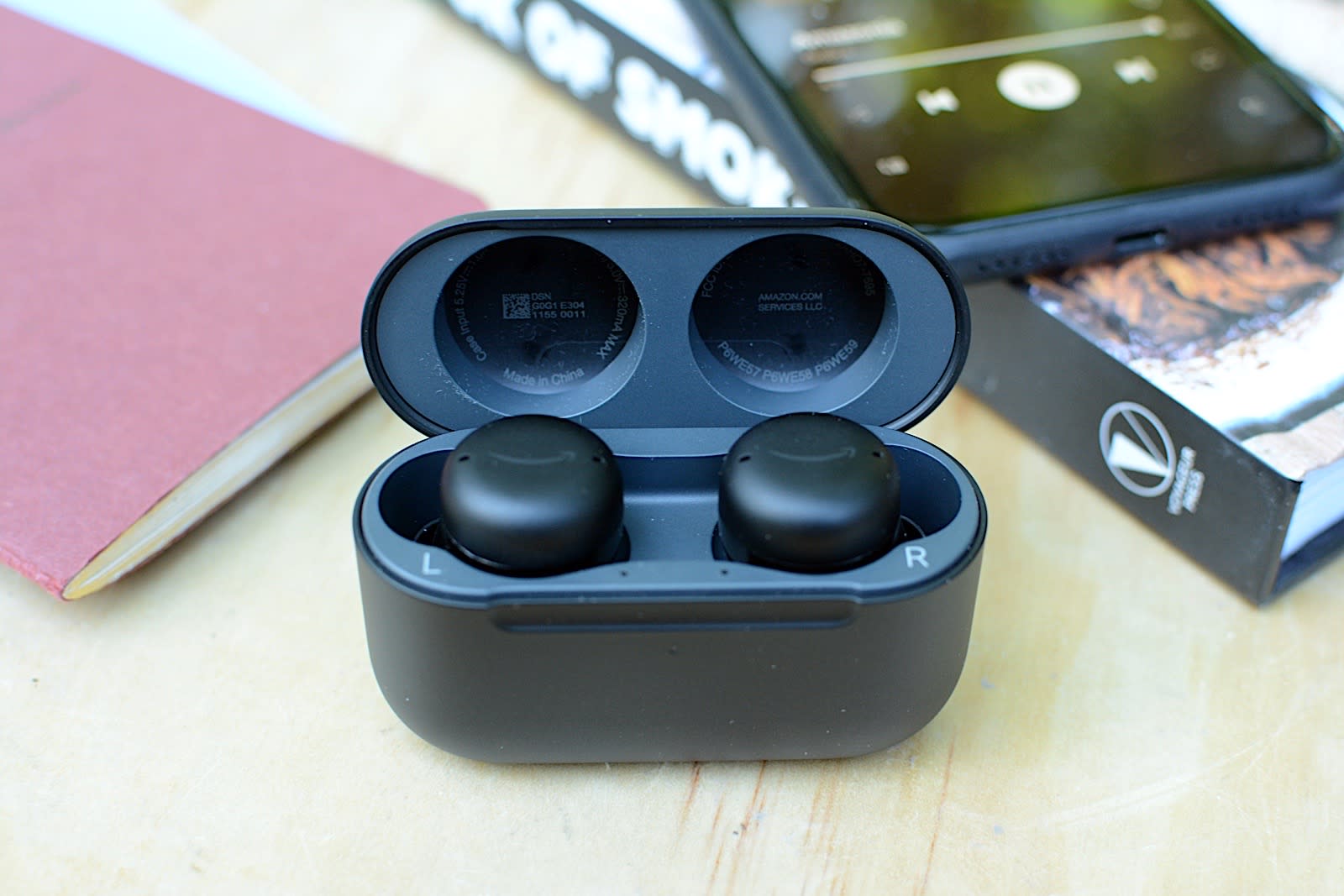 The company gave its earbuds a complete overhaul.

Compared to its closest rivals, Amazon was late to the true wireless earbud game. By the time the company introduced its Echo Buds in 2019, Apple was already on version two and the AirPods Pro came shortly after. Google’s wired Pixel Buds were two years old, and the company would go on to launch an improved version in 2020. As is typically the case when a company enters a new product category, the first Echo Buds had some flaws despite offering hands-free access to Alexa at an affordable price. Now Amazon has returned with the “all-new” Echo Buds ($100 and $120), which feature true active noise cancellation (ANC), improved audio quality and fresh design. And Amazon managed to do all of that while keeping the price low.

Amazon’s redesign for the second-gen Echo Buds starts on the outside. The earbuds themselves are 20 percent smaller, and they’re about two grams lighter. The company shortened the nozzle and paired it with new vents, which relieves some of the pressure of having something crammed in your ear for long periods of time. Four sets of tips and two sizes of wings give you several options to find the best fit. Plus, Amazon put an ear tip fit test inside the Alexa app so you don’t have to wonder if you’ve made the right choice.

Turn on browser notifications to receive breaking news alerts from Engadget
You can disable notifications at any time in your settings menu.
Not now
Amazon

The touch panel on the first Echo Buds was a raised glossy circle, but Amazon nixed that and made the outside a seamless matte black. The company added its iconic smile/arrow branding, but it’s tone-on-tone, so it doesn’t stand out. (The promo images make it look more prominent than it actually is.) Amazon opted for external microphones at the top and bottom of each bud and reduced the charging contact points from five to three. Like the previous version, the new Echo Buds are IPX4 rated against water splashes. This isn’t robust protection, but it should be enough to withstand sweat during a workout.

The included charging case was also redesigned. It’s 40 percent smaller and more vertical than flat, like much of the competition these days. Additional battery status LEDs and wireless charging are also among the upgrades, as is the switch to USB-C for the times you need to plug in.

Setup and the Alexa app

While the initial setup isn’t quite as quick as AirPods and iOS, Amazon did make things simple. As was the case with the first Echo Buds, everything is run through the Alexa app on your phone. All you need to do is flip open the Echo Buds case and wait for the blue light to indicate you’re in pairing mode. From there, a pop-up will guide you through the initial setup.

Inside the Alexa app, Amazon gives you a lot of options to customize the Echo Buds. First, the company put quick access to battery levels, ANC mode, microphone mute and workout info right on the home screen. A tap on the gear icon to the right opens up the detailed settings for the earbuds. Here, you can switch on Power Save to extend battery life, enable hands-free Alexa and adjust Sidetone (the amount of your voice you hear during calls). There are also manual EQ sliders with options for bass, mid and treble alongside an ear tip fit test, workout history and a Find My tool to help you locate a misplaced earbud.

You can also view info on the tap controls, but only the long press is customizable. By default, it’s set to toggle between ANC and ambient sound (Passthrough), but the alternate options include volume, your native assistant, Alexa tap to talk, mic mute or you can disable the function entirely. The app allows you to set different things for the press-and-hold on each earbud, instead of the same one being mirrored on both sides like the other gestures. This means you can put volume up on one bud and volume down on the other. Lastly, you can also disable any of the other tap controls in the app individually.

Alexa has learned some new tricks. In addition to asking the assistant to control music and podcasts playback, it can now find specific shows you follow on Amazon Music rather than making a general recommendation. Amazon also recently added a command that allows you to set a specific listening time: “Alexa, play jazz for 15 minutes” for example. There’s also the ability to help with non-audio tasks like reminders, calendar, shopping lists and even transit info in some US cities.

Audio quality is the biggest area Amazon needed to improve on the first-gen Echo Buds. Even with the optional EQ in the Alexa app, which returns on this new version, the sound was inconsistent. I could only find one volume where I would say they sounded “good.” The company says the new 5.7mm "high-performance driver” in each of the new Echo Buds offers "increased fidelity in bass and treble,” and I’ve found that to be accurate. Not only does the new model sound better, but the audio improvements are more evenly applied at low, medium and high volumes. Still, this new version sounds its absolute best at about 75 to 80 percent volume.

Overall, the sound is less compressed on the second-gen Echo Buds. Across genres, there’s more room for each element to stand on its own, especially when you’re listening to acoustic-driven bluegrass like Punch Brothers and metal bands like Mastodon and Gojira. The latter two tend to get treble-heavy and chaotic at full volume, which was an issue that plagued the previous model as well. The kick drum doesn’t get completely drowned out, but there’s noticeably more high end, so things like cymbals and guitars can be grating. When you move to hip-hop, the discrepancy isn’t as pronounced as there’s plenty of bassy thump to counter the cutting high at full volume.

The EQ sliders in the Alexa app do offer relief. By increasing bass and mids, I was able to counter the painfully loud cymbal blasts on Mastodon’s “Tread Lightly” to make things more enjoyable. When you make these adjustments, you lose some clarity, and things start to sound a bit muddy. Amazon’s improvements to sound quality are apparent, but there’s still work to be done.

One area Amazon massively improved is noise cancellation. By switching from active noise reduction (ANR) to true ANC, the company gave the Echo Buds the ability to actually block out sounds around you. I was impressed by how much better this new version can drown out a nearby conversation or the consistent roar of a white noise machine. Amazon’s Passthrough or ambient sound feature also works well, and it sounds more natural than a lot of the earbuds I’ve tested.

With two beamforming microphones on the outside of each earbud, Amazon clearly planned for these to be used for calls. As was the case with the previous model, the company offers adjustable Sidetone. This allows you to dial in how much of your voice you hear through the earbuds during calls, which helps you be a bit less shouty when you have both buds in. And trust me, it makes a difference. At a time when my entire family is home for part of the day, I can no longer get by with one earbud in on calls. Being able to use both but also hear myself without raising my voice is a handy feature.

In terms of audio quality, the second-gen Echo Buds make your voice come through clear. Unlike most true wireless earbuds, it doesn’t immediately sound like you’re on speakerphone. There is a bit of an echo (sorry), but it isn’t nearly as pronounced as if you were speaking with your phone away from your face. The new Echo Buds don’t do a great job with background noise, though, so I’d avoid sitting near your dog’s food bowl or the TV when you take an important call.

Just like the original Echo Buds, Amazon promises five hours of battery life on the earbuds themselves. That’s with both ANC and hands-free Alexa active. The company offers two additional charges via the case and it says you can add an hour and a half if you disable those two key features. At five hours, that figure is on par with much of the competition, but some similarly priced earbuds offer 10 or more. In a pinch, a 15-minute charge will give you two hours of listening time. During my tests, I consistently hit five hours almost right on the dot.

The retooled Echo Buds case has LEDs for each earbud in addition to one on the outside. These lights give you a battery estimate based on color (green, yellow and red). The new case is equipped with wireless charging (if you pay $20 more) and Anker made a pad just for it. That accessory has separate sets of lights that show you the status of both the earbuds and the case individually. There are four for each, so you have a better idea of where things stand than with the LEDs on the case. The pad will also charge your phone, so it’s not exclusively for use with the Echo Buds. Amazon sells the entire set as a bundle for $137.98.

Amazon is currently offering the new Echo Buds for $100 without the wireless charging case, but that will go up to $120 at some point. Even if you pay the extra $20 for the case (currently $120, but will be $140), the rates are hard to beat right now. At their eventual full prices, both of these options are quite attractive for a set of noise-cancelling earbuds with hands-free Alexa, decent sound and some degree of customization. Wireless charging is usually reserved for more expensive devices, and it’s rare to see on earbuds under $150.

Since the Echo Buds are the prime choice if Alexa is your voice assistant, the direct comparisons are AirPods and Pixel Buds. Both of these give you hands-free access to Siri and Google Assistant respectively, along with deep integration with iOS and Android. Neither offer the customization that Amazon does, but they do support wireless charging. They’re also both more expensive and new models from Apple and Google are reportedly imminent. We could see the rumored Pixel Buds A-Series as soon as next week at Google I/O.

Amazon’s second-gen Echo Buds are improved in nearly every way. A new design makes the smaller buds more comfortable to wear for long periods of time and the sound quality is noticeably better. However, you’ll likely still need to make some EQ adjustments across genres and battery life hasn’t improved at five hours. Conveniences like optional wireless charging, Sidetone for calls and new Alexa skills make these earbuds an attractive option for anyone who has bought into Amazon’s ecosystem. Plus, the company managed to make a better product without raising the price, which is always a welcome surprise.