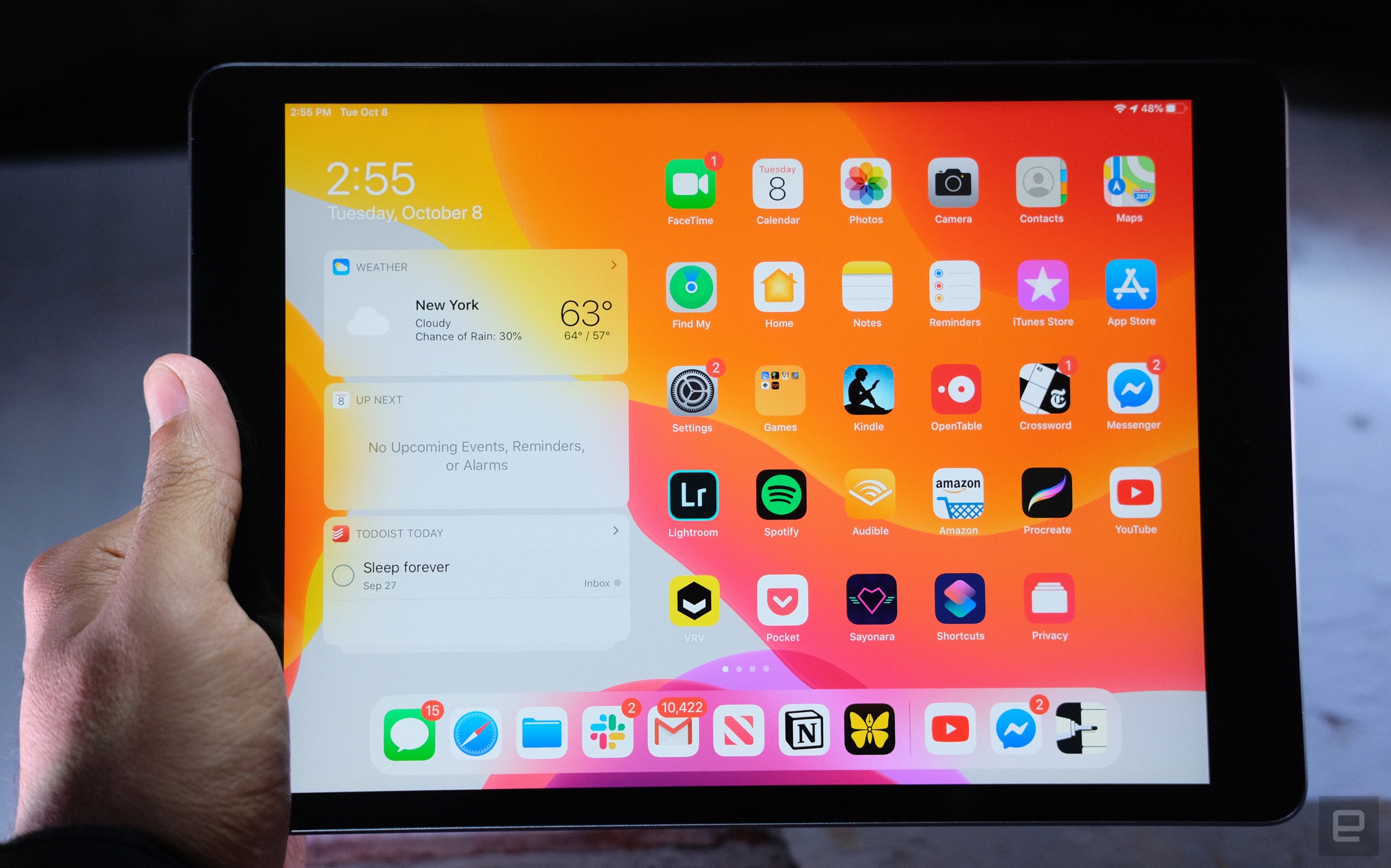 As we enter the weekend and Father’s Day is approaching, there are still a bunch of sales you can snag for dad (or for yourself). Apple’s base iPad returns to its lowest price ever of $250, and you can get $100 off the Apple Watch Series 5 and $50 off the iPad mini. Numerous headphones and earbuds from Bose, Sony and Beats are discounted, while Amazon’s regular Kindle is also on sale for $65. Here are the best deals from this week that you can still buy today.

Apple’s most affordable iPad is on sale for the best price we’ve seen it — only $250. That’s the price for the 32GB model, but the 128GB model is also on sale for $330. While this isn’t the first time it’s dropped so low, it’s a good chance to grab one if you missed the last sale. We gave the 10.2-inch iPad a score of 86 for its larger display and good battery life.

The Apple Watch Series 5 remains at its lowest price ever, only $300 for the GPS-only, 40mm model. The GPS + Cellular model is also $100 off, dropping it down to $400. These sales are available at Amazon as well as Best Buy. The latest Apple Watch builds upon all the solid features present in the previous models including great workout tracking, built-in heart rate and GPS monitors, ECG measurements and more. We gave the Series 5 a score of 88 for its new always-on display, built-in compass and new international emergency calling.

The latest iPad mini is $50 off at Amazon, bringing its price down to $350. While not the lowest price ever, it’s still a good deal that’s worth grabbing if you’ve been eyeing Apple’s smallest tablet. We gave the iPad mini a score of 85 for its improved display, great performance and new Apple Pencil (1st gen) support.

You can still snag a bunch of discounted Echo devices right now. Of note in this sale is the Echo Dot smart speaker with clock for $35, which is the lowest price we’ve seen this device hit, other than the occasional lightning deal. Normally priced at $60, this Echo Dot is slightly more useful than the regular model because it displays the time through its fabric coating. Other good deals include the $170 for an Echo Studio plus a Hue smart light bulb, $100 for an Echo Plus plus a Hue bulb and $17.49 for the Echo Flex.

The regular Kindle is still $25 off, bringing its price down to $65. While this is $5 shy of the lowest price we’ve seen the Kindle drop to, it remains a great deal — especially if Dad has been eyeing an e-reader. The more expensive Kindle Paperwhite is also on sale for for $100, but the regular Kindle is the better deal of the two. We gave the Kindle a score of 91 for its front-lit display, improved design and better screen contrast.

Roku has discounted a number of its streaming devices ahead of Father’s Day. You can get them at Roku’s website, but they’re also available at Amazon and Best Buy. The best deal of the bunch is the Roku Premiere for $29 — this tiny streamer is normally priced at $39 and it basically gives you everything you need to stream 4K, HDR content in a really affordable package. If you want a device with more capabilities, the Roku Streaming Stick+ is on sale for $39 (down from $49) and the Roku Ultra is on sale for $79 (down from $100).

You can still grab a discounted fitness tracker through Fitbit’s Father’s Day sale. A couple of its devices are on sale, but the best deal is $20 off the new Fitbit Charge 4. This is the company’s newest fitness tracker that’s normally priced at $150. It has all of the features you’d expect in a Fitbit device, including solid workout and daily activity tracking, sleep monitoring and automatic exercise tracking — but the kicker is its built-in GPS that allows you to map outdoor runs and bike rides without your smartphone.

The Anova Precision Cooker Pro remains discounted to $200 at Amazon. That’s 50 percent off its normal price of $400, which is a great deal if you want a powerful sous vide machine. Those with tighter budgets can get Anova’s regular Precision Cooker for $133 as well, which is about $57 off its normal price. The Cooker Pro is better for those with large families or those who often entertain, while the regular model is best if you’re just starting out with sous vide.

Some of the best wireless headphones you can get are still on sale — Amazon and Best Buy have the white model of the Bose 700 headphones for $300, which is the lowest price we’ve seen them. They earned a score of 90 from us for their fantastic noice cancellation, easy touch controls and comfortable design.

Sony’s WF-1000XM3 wireless earbuds remain on sale for $178 at Best Buy and Amazon. We gave these ANC earbuds a score of 89 for their long battery life, solid sound quality and handy mobile app. If you want something a bit more sporty, Best Buy and Amazon are also running a sale on the Sony WF-SP800N wireless earbuds, dropping them down to $168. These earbuds are nearly as good as the WF-1000XM3s, earning a score of 88 from us for their powerful bass and affordable starting price.

You can still snag Beat Solo Pro headphones for $230 at Best Buy and Amazon. They earned a score of 81 from us for being Beats’ most impressive headphones to date thanks to their impressive sound quality, good ANC and hands-free Siri controls.

Those in need of a smart yet somewhat analog watch can get the Withings Steel HR for $120, or $60 off its normal price. This sale price is close to the lowest price we’ve seen on this watch and it’s a good option for those that want daily activity and fitness tracking features in a smartwatch that almost passes for a traditional timepiece.

Newegg has a sale that knocks the price of three months of Xbox Game Pass Ultimate down to $22 when you use the code EMCDMGR38 at checkout. Recently, we saw the price of the three-month subscription drop to $25 and then $23, so this is an ever-so-slightly better deal than those. Game Pass Ultimate gives you access to a library of games to play whenever you want, discounts on new Xbox games and a percentage off add-ons and consumables.

This bundle combines the Echo Show 5 smart display and Amazon’s new Blink Mini security camera for only $65. The Show 5 typically costs $60 to $90, while the Blink Mini normally costs $35. Getting them both for $65 is a great deal, and you can use them together. Just ask Alexa to show you the video feed from the Blink Mini on the Echo’s screen whenever you want to see what kind of mischief your pets are getting up to in your living room.

Maker of smart hearing aids Eargo is running a Father’s Day sale that slashes 15 percent off the price of the Eargo Neo HiFi. These are the newest hearing aids from the company that include increased bandwidth to amplify a wider range of frequencies, better feedback cancellation and a new algorithm for wind reduction. Engadget’s James Trew tested these out and found them to be a solid improvement to Eargo’s previous hearing aids. This sale knocks $450 off the Neo HiFi’s price and, while they remain expensive at $2,500, it’s not an usual price for a good hearing aid.

Razer has new peripherals on sale now. Star Wars fans might want to snag Stormtrooper Limited Edition keyboards and mice — the BlackWidow Lite keyboard is now $65, down from $100, while the Atheris wireless mouse is $40, down from $55. Razer also still has some non-branded keyboard-and-mouse bundles on sale, too. The Basilisk Ultimate mouse and BlackWidow Elite keyboard combo costs $230 right now and the BlackWidow keyboard and a Viper wired mouse bundle remains on sale for $140.

Apple’s already has the back-to-school mindset as it announced its special promotion for the 2020 season — the company will throw in a pair of free AirPods when you buy select Macs or iPads for college. AirPods with the wired charging case will be totally free and you can upgrade to AirPods with the wireless charging case for $40 extra or even AirPods Pro for $90 extra. This is a good deal considering how popular AirPods are and how well they work with Apple devices. Student customers can also save a bit of money on their new Apple devices with the company’s education pricing.