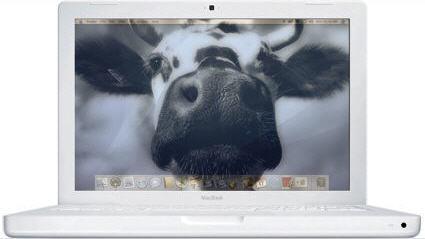 Hey MacBook owners, Apple just released an SMC firmware update which might rid your box of any annoying barnyard noises. According to Apple, the new firmware "adjusts fan behavior" in the MacBook, the same fan identified as the culprit behind those wee "moos." Although not as widely reported as the issues with discoloration which Apple has already addressed, the mooing sound (click to listen) seems to stem from the MacBook's fan repetitively turning on and off at certain temperatures and loads. Early reports from those who installed the update over at sister site TUAW, seem to suggest that this SMC update to 1.4f10 does the trick while also reducing the MacBook's overall temperature. So what's keepin' ya sport, best get a mooove on. Yeah, that was painful... but so there.

[Thanks to everyone who sent this in, via TUAW]
In this article: apple, firmware, mac, macbook, macbook heat, macbook moo, MacbookHeat, MacbookMoo, macintosh, SMC firmware, SmcFirmware
All products recommended by Engadget are selected by our editorial team, independent of our parent company. Some of our stories include affiliate links. If you buy something through one of these links, we may earn an affiliate commission.
Share
Tweet
Share