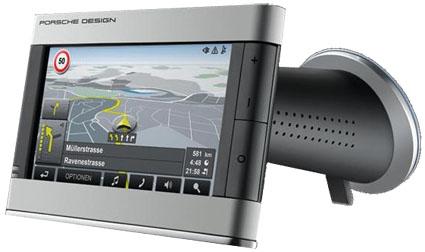 The rumors that Porsche Design was contributing to the design of a satellite navigation system have turned out to be true (don't you just love it when that happens?) now that Navigon has shown off the device at the IFA. The specifications are almost identical to the rumor, with the device featuring a 4.3-inch 480 x 272 pixel 16:9 display, a 520MHz XScale processor, a dedicated graphics processor, 64MB of RAM / ROM, an SD / MMC slot, a Bluetooth hands-free kit, and a removable battery, all running on Windows CE. The system will warn the driver of radar speed traps and of traffic in the 37 mapped European countries, and will even play MP3s -- albeit on the undoubtedly tinny speakers. The only downsides appear to be the roughly $960 price tag and the weak USB 1.1 support, but if you can cope with these niggles then keep your eyes open during November, because that's when it's expected to ship.
In this article: GPS, Navigon, P9611, Porsche Design, PorscheDesign, Sat nav, SatNav
All products recommended by Engadget are selected by our editorial team, independent of our parent company. Some of our stories include affiliate links. If you buy something through one of these links, we may earn an affiliate commission.
Share
Tweet
Share