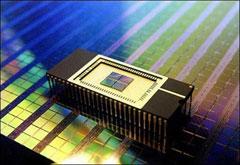 If IBM, Macronix, and Qimond have their way, the now ubiquitous flash memory could soon be on its way out, replaced by the new-and-improved "phase-change" memory developed by the trio of companies. While complete details on this catchily-named new memory are under wraps until the big unveiling at this week's International Electronic Devices Meeting in San Francisco, according to the AFP, it's supposedly 500 to 1,000 times faster than conventional flash memory and uses about half as much power to boot. According to IBM senior manager Spike Narayan, that'll allow for the non-volatile memory to replace replace hard drives and pave the way for instant-on computers, as well as let you "carry your own fancy computer application in your hand." While these three memory makers aren't the first to jump on the phase change bandwagon, if those numbers are to be believed, their RAM would seem to seem to leave the others in the dust. Whether it's as fast to show up on the market or not, we'll have to wait and see.

In this article: flash memory, FlashMemory, ibm, mcronix, memory, phase change memory, PhaseChangeMemory, qimond
All products recommended by Engadget are selected by our editorial team, independent of our parent company. Some of our stories include affiliate links. If you buy something through one of these links, we may earn an affiliate commission.
Share
Tweet
Share