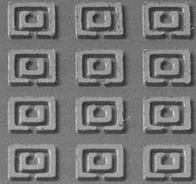 We've got next-to-invisible objects and cameras with ridiculously large sensors, and thanks to a team of brilliant researchers over in Germany, now we've got "an exotic material with a negative refractive index for visible light." Gunnar Dolling and his colleagues at the University of Karlsruhe in Germany have created a metamaterial with layers of silver sandwiching a thin sliver of nonconducting magnesium fluoride on a glass sheet, and once an array of square holes were etched in, his tests showed that the "structure had a negative refractive index of -0.6 for light with a wavelength of 780-nanometers," besting the previous record of 1,400-nanometers. While the scientific babble may not mean much to you, the long and short of it is that this discovery could "lead to further breakthroughs in invisibility cloaks, which could hide objects from the human eye" and make escaping your troubles quite a bit easier. Moreover, the technology could be used in "superlenses" to see details "finer than the wavelength of visible light," but Dolling is reportedly more interested in studying the effects of his discovery than attempting to build any mystical devices, which is probably for the good of mankind, anyway.

In this article: dolling, german, germans, germany, infrared, invisibility, invisible, metamaterial, negative refractive index, NegativeRefractiveIndex, optical, optics, refractive, research, sight, wavelength, waves
All products recommended by Engadget are selected by our editorial team, independent of our parent company. Some of our stories include affiliate links. If you buy something through one of these links, we may earn an affiliate commission.
Share
Tweet
Share