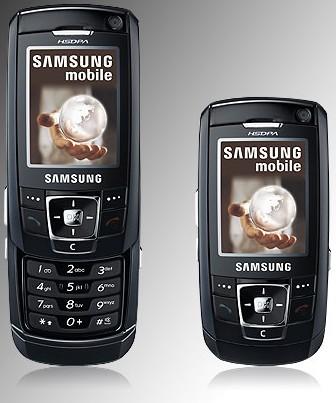 Although Samsung's been busying itself lately with newfangled RAM releases, it has apparently taken the time to confirm what we already suspected. The Z720 has been officially released as part of the Ultra Edition lineup, and per usual, the 13.8 is tagging itself with a "world's slimmest" label, this time for thinnest HSDPA-equipped slider. This sexy handset weighs in at just 80-grams, and features a 3-megapixel AF camera, 2.1-inch QVGA display, WAP 2.0 / HTML browsing capabilities, an additional camera for "video telephony," document viewer, PIM, Bluetooth, USB, and even a microSD slot. Aside from the UMTS / EDGE / HSDPA / GSM / GPRS connectivity options, you'll also find Samsung's uGo system built-in, not to mention the uTrack feature that sends an SMS to a predetermined number if the SIM card is tampered with. Notably, the 13.8 is the first mobile from Samsung with Google Mobile Search and Gmail pre-installed, which certainly contradicts with the recent Samsung / Opera lovefest we've been hearing about. Nevertheless, the Z720 should start finding its way into bustling European countries soon for a yet-to-be-disclosed price, with smaller locales getting access thereafter.

[Via Akihabara News]
In this article: audio, bluetooth, browser, camera, edge, england, europe, gmail, google, gsm, hsdpa, microSD, mobile, music, QVGA, samsung, speakerphone, ugo, uk, ultra, ultra edition, Ultra Edition 13.8, UltraEdition, UltraEdition13.8, umts, usb, uTrack, wap, z720
All products recommended by Engadget are selected by our editorial team, independent of our parent company. Some of our stories include affiliate links. If you buy something through one of these links, we may earn an affiliate commission.
Share
Tweet
Share