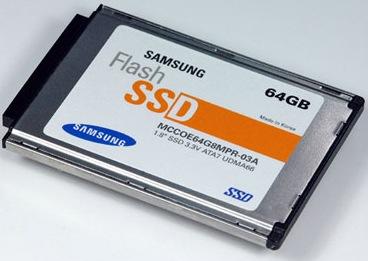 Oh sweet mother of solid state disks, Samsung just birthed another. Their new 1.8-inch 64GB SSD not only doubles the capacity of their current offering, it's said to be up to 60% faster than their existing SLC NAND-based 32GB SSD to boot. Mass production of this 1.8-inch drop-in replacement for hard disks is expected to begin in Q2. Fine, but hey, Samsung, in case you haven't noticed SSDs are already plenty fast enough in comparison to the conventional hard disks they are meant to replace. So how 'bout bringing us consumers bigger and cheaper SSDs based on your new MLC NAND instead of your lickity-quick SLC NAND? After all, Sandisk and Toshiba are breathing down your neck on this one. Thanks for listening.
In this article: mlc nand, MlcNand, nand, samsung, slc nand, SlcNand, solid state disk, SolidStateDisk, ssd
All products recommended by Engadget are selected by our editorial team, independent of our parent company. Some of our stories include affiliate links. If you buy something through one of these links, we may earn an affiliate commission.
Share
Tweet
Share