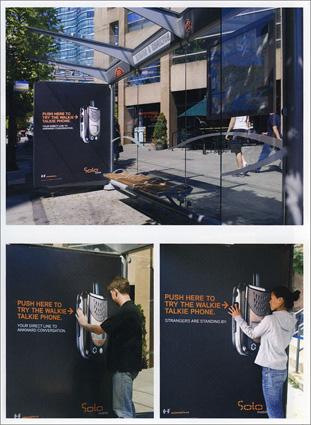 Hot on the heels of Nokia's own bus stop gimmick comes none other than Solo, which has erected a clever display on a number of waiting areas to allow perfect strangers to yap it up on giant mobiles. The interactive billboards each sport a larger-than-usual flip phone, which allows curious onlookers to mash an enlarged walkie talkie button and get on the horn with a faraway stranger. The active two-way radio setup was reportedly installed in transit shelters in Vancouver, Montreal, Toronto, and Calgary, and the system supposedly connects users in the different cities to one another when a conversation is initiated. Unfortunately, Engadget HQ doesn't happen to reside in the land of the Canucks, so for our brethren in the north, why not stop on by and give a shout to a fellow Canadian, eh?

[Via Core77]
In this article: ad, advertisers, advertising, billboard, canada, Culture, gimmick, marketing, messaging, mobile, montreal, others, radios, solo, strange, toronto, two way radio, TwoWayRadio, walkie talkie, WalkieTalkie
All products recommended by Engadget are selected by our editorial team, independent of our parent company. Some of our stories include affiliate links. If you buy something through one of these links, we may earn an affiliate commission.
Share
Tweet
Share