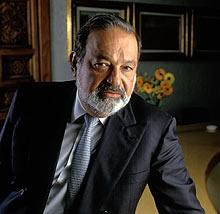 It was probably inevitable, with Bill Gates handing out his cash right and left, and Microsoft's stock in pretty much a holding pattern for most of the 2000's, but it's still sad to see our man Bill get knocked off the top spot on the "world's richest" list. His replacement is no stranger to tech though, Carlos Slim built his fortune in the Mexican telecom biz, and has amassed an estimated net worth of $67.8 billion, thanks to a surge in the shares of America Movil. Slim's fortune represents 8% of Mexico's gross domestic product, and whatever he lacks in geek cred he more than makes up on the streets with that entirely gangster name of his.

In this article: bill gates, BillGates, carlos slim, CarlosSlim, richest man, RichestMan, world's richest man, World'sRichestMan
All products recommended by Engadget are selected by our editorial team, independent of our parent company. Some of our stories include affiliate links. If you buy something through one of these links, we may earn an affiliate commission.
Share
Tweet
Share