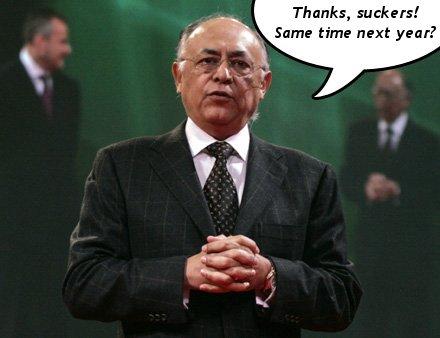 In most jobs, if you cost the company money and generally screw up, you can expect a solid dressing-down from the management and then a swift boot out the door. Unless you run a major corporation like AMD. If you're Hector Ruiz, CEO of the ailing chipmaker, you can freely and openly admit to fouling up the works and still get yourself a tidy raise, it seems. "We blew it and we're very humbled by it and we learned from it and we're not going to do it again," Ruiz said on Thursday, just before the board of directors raised his $1,046,358 salary to $1,124,000 -- a 7.4-percent gain. Oh, did we mention the nearly $13 million in stock options too? Hey, just because you tacked on $3.7 billion dollars in long term debt and your stock plummeted 56.2-percent doesn't mean you're doing a bad job... although we can't think of another way to describe it.
In this article: advanced micro devices, AdvancedMicroDevices, amd, ceo, chipmaker, hector ruiz, HectorRuiz, raise
All products recommended by Engadget are selected by our editorial team, independent of our parent company. Some of our stories include affiliate links. If you buy something through one of these links, we may earn an affiliate commission.
Share
Tweet
Share