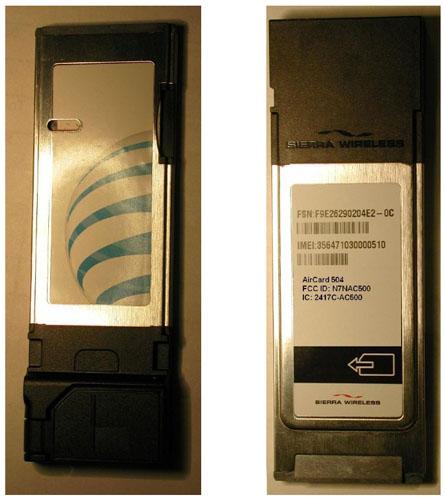 ExpressCard and PC Card slots both seem in danger of going the way of the dodo right now, but they're not dead yet -- far from it -- which means that carriers still have a vested interest in making sure there are data cards ready to suck $60 out of your wallet in exchange for 5GB of 3G data. So far, AT&T's only been selling a USB modem that's capable of taking advantage of its newly-christened 7.2Mbps markets, which means they've got to get a move on with those other form factors -- and by all accounts, it seems that's where this AirCard 504 comes into play. Rumored previously as the "Triple Lindy," this bad boy should come bundled with a PC Card adapter (just like its AirCard 503 cousin) and feature support up to full 21Mbps HSPA+, although the best you'll likely ever get out of it connected to an AT&T cell is 7.2. We don't have intel on a release date right now, but we imagine they're itching to get this one out there -- the carrier doesn't offer any ExpressCard option at the moment, amazingly.
In this article: 504, aircard, aircard 504, Aircard504, fcc, mobile, sierra wireless, SierraWireless
All products recommended by Engadget are selected by our editorial team, independent of our parent company. Some of our stories include affiliate links. If you buy something through one of these links, we may earn an affiliate commission.
Share
Tweet
Share