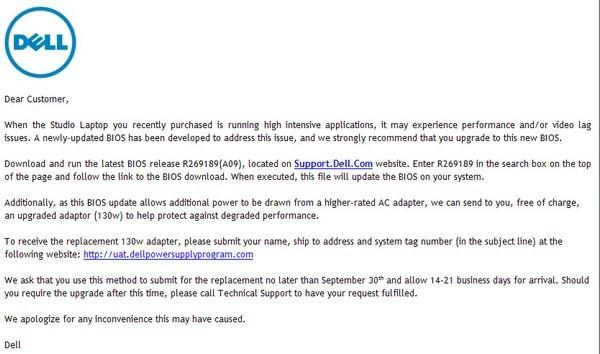 It's taken a long time, too long by most accounts, but Dell finally has what looks to be a proper, honest to gosh fix for the CPU throttling issues that have been plaguing some of its Studio laptops. Users were reporting that the machines, when faced with slightly elevated temperatures, would throttle themselves back by up to 95 percent, leaving some folks with 100MHz paperweights. Dell issued a firmware update quickly after we shed a little light on the situation back in December, a "fix" that helped some but, apparently, not all. We're just now hearing that the company apparently launched a program back in February to replace the stock 90 watt power adapters with more capable 130 watt models for anyone suffering this affliction. However, this doesn't seem to be a proper recall, as the reports we're seeing indicate only customers who call and complain have been made aware of this program. So, consider yourself made aware. The source link below will take you to the official site where you can order a replacement adapter, but if it doesn't like your service tag number give Dell support a call and mention this program. We're hearing others are having success going that route.

[Thanks, Kevin]
In this article: cpu, cpu throttling, CpuThrottling, dell, power adapter, power brick, PowerAdapter, PowerBrick, studio, studio xps, StudioXps, throttlegate, throttling, xps, xps 1645, Xps1645
All products recommended by Engadget are selected by our editorial team, independent of our parent company. Some of our stories include affiliate links. If you buy something through one of these links, we may earn an affiliate commission.
Share
Tweet
Share