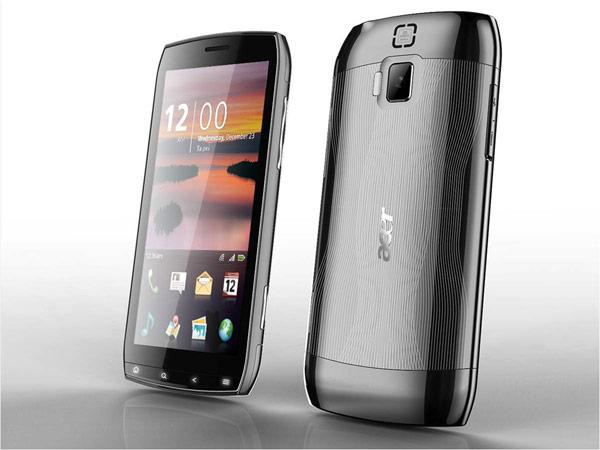 Acer may be calling this "100 percent smartphone. 100 percent tablet," but something just doesn't add up there. That being said, we have to agree that a 1024x480 screen resolution on a 4.8-inch smartphone is downright drool-worthy. Clocking in at just a smidgen smaller than Dell's Streak, this here phone (no finalized name has been bestowed quite yet) was just revealed at Acer's Global press event in New York City. It was only shown briefly, demonstrating an unknown version of Android and the "evolution of Acer UI." Specs wise, there's a two megapixel front-facing camera, eight megapixel rear camera (with LED flash), 720p video recording, a six-axis Gyroscope + accelerometer package and LED edge lighting. Per usual, Acer's keeping a lid on any pricing estimates, but it'll be shipping out to gape-jawed customers everywhere in April 2011.

Update: We've got the full PR after the break, which informs us of the atypical 21:9 aspect ratio in use here as well as its "full metal body." Curiously enough, it's also rocking a curved back (is that a trend we spot?), Bluetooth 3.0, 802.11n WiFi, HSDPA support, a 1GHz Snapdragon processor and an HDMI output. Delicious, all the way around.

Update 2: Does that elongated form factor seem a wee bit familiar? It should. 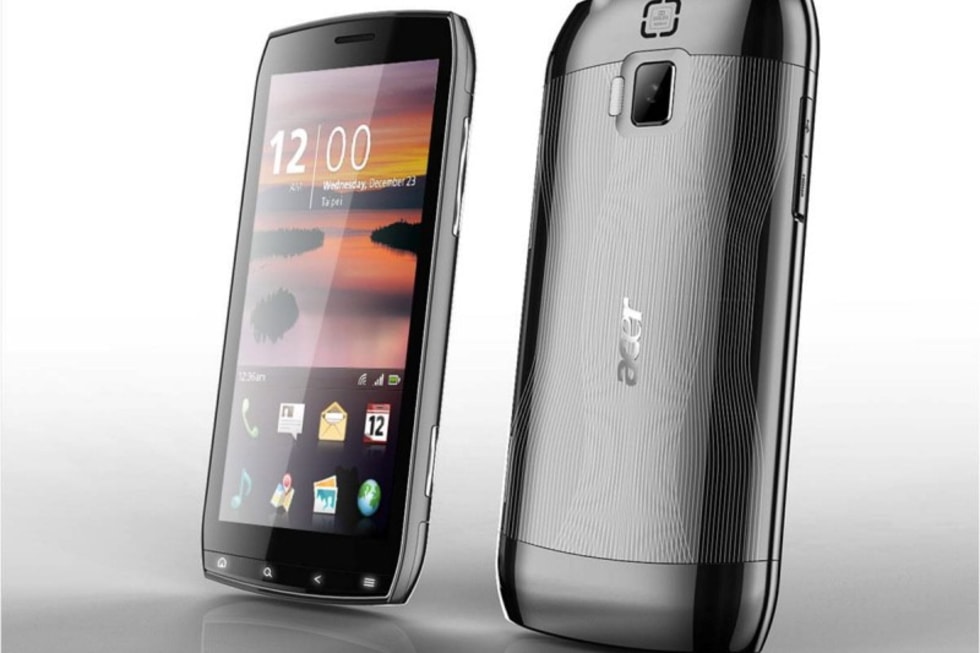 New York, November 23rd 2010 - The new Acer smartphone with the soul of a tablet perfectly combines the capabilities of a smartphone with a tablet-like format: a huge 4.8" widescreen with a 21:9 aspect ratio and a super cool chassis.

Its revolutionary design , characterized by a stretched out, thin and slightly curved shape, makes it a fascinating device that will not go unnoticed. Its full metal body, enriched by subtle wavy patterns, conveys a sense of timeless elegance. What's more, it offers a perfect fit in your hand thanks to its smoothly curved back and minimal width (64mm).
The front is entirely dominated by the extraordinary, multi-touch, high resolution 4.8" screen, with 4 keys: Home, Search, Back, and Menu. While on the back there is an 8MP camera, complete with LED Flash.

This latest Android smartphone is extremely powerful, guaranteeing long-lasting fun. It will also be able to wirelessly control all the multimedia content of your home environment, thanks to the integrated clear.fi media sharing system.

IDEAL FOR BROWSING
• No limit in assessing any web sites with the same user experience as using a traditional PC, so web sites don't need to be resized and adjusted, thanks to its exceptional resolution of 1024x480 and a very large 4.8" screen (12.2cm diagonal), there is no need to zoom in on web pages, or to scroll left & right. The only thing you need to do is scroll up & down, just like on your PC.
• Fast and fully featured, the Android browser offers: multi-touch, Java script optimization, Adobe Flash Player 10.1 support, and multiple page opening.
• Ultra-fast high-speed connectivity via HSDPA @ 14.4 and WiFi N for data connection.
• Bluetooth 3.0

GREAT FOR MOVIES
On the 21:9 screen you can watch a movie in its original format, for an engrossing cinema-like experience. What's more the LED backlit display uses the same technology as TV showing super bright and vivid images; to top it off, Dolby Mobile technology delivers vibrant, immersive sound. Not enough for you yet? Thanks to DLNA technology or the HDMI cable, you can connect it to your TV to view your content on an even bigger screen!

POWERFUL
Inside the product beats the powerful 1GHz Snapdragon processor, which, in addition to the large screen, turns this smartphone into a perfect game console. Together with 6-axis motion sensing (Gyroscope + accelerometer), this smartphone will exceed any gaming expectation.
Equipped with an 8MP camera and LED flash, and a 2MP front camera for high quality IP video calling.
With a screen resolution of 1024x480, more content can be displayed on screen, in all regular apps, such as, Contacts, Google Maps, Email, Instant Messaging conversations, etc.

100% Smartphone, 100% Tablet: a revolutionary experience for people who want it all!

In this article: acer, acer ui, AcerUi, android, bluetooth 3.0, Bluetooth3.0, breaking news, BreakingNews, google, mid, snmartphone, tablet
All products recommended by Engadget are selected by our editorial team, independent of our parent company. Some of our stories include affiliate links. If you buy something through one of these links, we may earn an affiliate commission.
Share
Tweet
Share