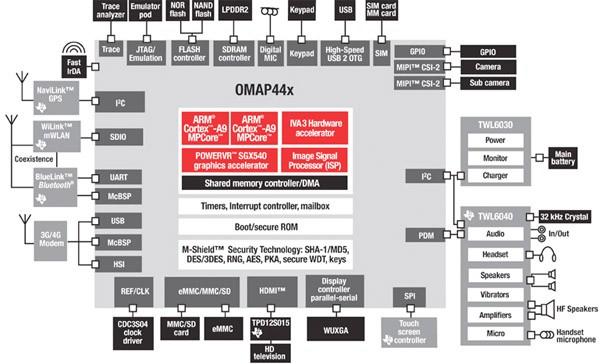 Phones and tablets based on TI's first production OMAP4 processor -- the OMAP4430 -- won't even be on the market until early next year, but TI's already planning ahead with the announcement of an upgraded chip that promises a 50 percent boost in overall performance. The new OMAP4440 can send its two Cortex-A9-based cores as high as 1.5GHz, while the 4430 tops out at 1GHz; TI says that means we should expect a 1.25x improvement in graphics performance, a 30 percent decline in webpage load time, and 1080p playback performance that doubles the slowpoke (comparably speaking, anyway) 4430. The company expects to sample these little speed demons to manufacturers in the first quarter of next year with volume shipment coming in the second half, itching to do battle with Samsung's Orion; in the meantime, we suppose your 4430 will have to do. Follow the break for the press release.

"The increased performance given by the OMAP4440 applications processor illustrates TI's ability to push mobile computing possibilities with the right processor architecture enveloped in the right platform, " said Remi El-Ouazzane, vice president, OMAP platform business unit, TI. "We seized an opportunity to enhance the platform capabilities driving the OMAP4430 processor's success today. As OMAP4430 processor-based products hit the market in first half 2011, we're arming our customers with a huge performance boost via an easy migration to OMAP4440 processor for their next wave of exciting devices. The resulting user experiences will radically impact how consumers continue to integrate mobile technology into their daily lives."