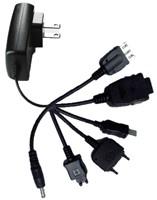 It's been more than a year since Nokia, Apple, RIM, Motorola and just about every other major cellphone manufacturer agreed on a micro-USB cellphone charger standard for Europe, but the two key European standards bodies have just now finally followed up on their end of the bargain. CEN-CENELEC and ETSI have today published harmonized standards for a universal cellphone charger based on micro-USB, which has now put the ball back in the manufacturers' court to actually produce phones that rely on the newly standardized chargers. According to the European Commission, the first of those are expect to arrive sometime "in the first months of 2011," and it expects the chargers to be "predominant" within two years. Head on past the break for the official announcement.

European Commission Vice-President Antonio Tajani, Commissioner for Industry and Entrepreneurship, said: "I am very happy that the European Standardisation Bodies have met our request to develop within a short space of time the technical standards necessary for a common mobile phone charger based on the work done by industry. Now it is time for industry to show its commitment to sell mobile phones for the new charger. The common charger will make life easier for consumers, reduce waste and benefit businesses. It is a true win-win situation."

Incompatibility of chargers for mobile phones is not only a major inconvenience for users, but also a considerable environmental problem. Users who want to change their mobile phones must usually acquire a new charger and dispose of the old one, even if it is in good condition. In response to citizens' demand for a common charger, the Commission invited manufacturers to agree on a technical solution making compatible the chargers of different brands.

As a result, world leading mobile phone producers committed themselves to ensure compatibility of data-enabled mobile phones, expected to be predominant in the market within two years, on the basis of the Micro-USB connector. The agreement was established in June 2009 and signed by Apple, Emblaze Mobile, Huawei Technologies, LGE, Motorola Mobility, NEC, Nokia, Qualcomm, Research In Motion (RIM), Samsung, Sony Ericsson, TCT Mobile (ALCATEL), Texas Instruments and Atmel (IP/09/1049).

The Commission then issued a mandate to the European Standardisation Organisations CEN-CENELEC and ETSI in December 2009, requesting the development of European standards for the common charger. The two organisations have now delivered. The standards allow for interoperability, i.e. the common charger is compatible with data-enabled mobile telephones of different brands. They also take account of safety risks and electro-magnetic emissions and ensure that common chargers have sufficient immunity to external interference.

The European Commission expects the first common chargers and mobile phones compatible with the new standards to reach the European market in the first months of 2011.
In this article: cellphone charger, CellphoneCharger, CEN-CENELEC, charger, ETSI, europe, european, European Commission, European union, EuropeanCommission, EuropeanUnion, micro usb, micro-usb, MicroUsb, phone charger, PhoneCharger, standard, standards
All products recommended by Engadget are selected by our editorial team, independent of our parent company. Some of our stories include affiliate links. If you buy something through one of these links, we may earn an affiliate commission.
Share
Tweet
Share