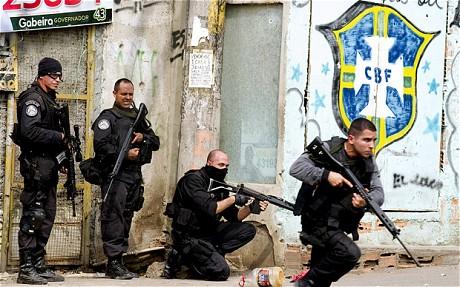 In advance of the 2016 Olympics 2014 World Cup (and the thousands of visitors it'll draw), military police in São Paulo and Rio de Janeiro are testing glasses topped with cameras capable of scanning crowds for criminals. The camera analyzes 46,000 biometric points on up to 400 faces per second -- data that then gets compared with a database of up to 13 million people. If a mug happens to match a wanted person or known troublemaker, a red light will appear on a small screen connected to the glasses. And, in a twist particularly befitting Robocop, the glasses can purportedly be calibrated to zoom in from 12 miles away, though they'll typically be used to manage crowds at a much more personal 50 meters (164 feet). For now, local cops will use them to tame crowds (and likely brawls) at soccer matches and even concerts, but hope to eventually monitor those crowded World Cup stands. As for us, we're all kinds of curious. Where do those tens of millions of faces come from -- Santa's naughty and nice list? What if people wear masks? Or sunglasses at night?
In this article: 2016 olympics, 2016Olympics, Brazil, cops, criminal, criminals, glasses, heads up display, HeadsUpDisplay, hud, law enforcement, law enforcement camera, law enforcement equipment, LawEnforcement, LawEnforcementCamera, LawEnforcementEquipment, Olympics, police, rio de janeiro, RioDeJaneiro, robocop, sao paolo, SaoPaolo, wargadget
All products recommended by Engadget are selected by our editorial team, independent of our parent company. Some of our stories include affiliate links. If you buy something through one of these links, we may earn an affiliate commission.
Share
Tweet
Share