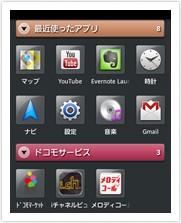 If you blinked for even a second during the announcement of NTT DoCoMo's summer lineup, you may have missed the mention of an exclusive Android skin dubbed "docomo Palette UI." At the time, all we knew about this international-interface-of-mystery was that it had a heavy emphasis on app management. After gazing upon a recently-published YouTube video and doing a little digging, we can now wrap our minds visually around what to expect. The demo you'll witness below shows off an app tray that's sorted by categories, rather than one buffet that bundles every app you own. It's a welcome idea that will likely be an added value for consumers, but there's one small concern: we've seen this before, most recently in the latest version of MotoBlur, so we would hardly call it innovative. We should expect to see the Palette UI on at least four Android devices coming out this summer, most notably the superthin Medias WP N-06C and powerful Galaxy S II --though we're curious to see what happens to TouchWiz 4.0 on the latter.

In this article: android, android ui, AndroidUi, aquos, aquos phone, AquosPhone, galaxy s 2, galaxy s ii, GalaxyS2, GalaxySIi, japan, medias, mobile, ntt, ntt docomo, NttDocomo, palette, samsung, ui
All products recommended by Engadget are selected by our editorial team, independent of our parent company. Some of our stories include affiliate links. If you buy something through one of these links, we may earn an affiliate commission.
Share
Tweet
Share